A new boutique hotel has been built in the exquisite village of Saint Nicolas de Veroce, an hour’s drive from Geneva.   Introducing five star to the region has taken three years of careful, sensitive and clever planning. The French architect and interior designer live up the road from the property and the general manager, Anne Cecile, advised she does occasionally knock on his door with ‘we ‘ave a problem’. But these are early days. L’Armancette opened at the end of June this year, and the hotel staff are already very polished, offering a consistently warm and stylish service for guests in search of a sublime spa experience.

I don’t use ‘sublime’ lightly.  The stunning forest walks in the area will turn you into a tree hugger. People visit here for holiday and tend to want to stay and buy. I certainly do.  The air is clean, the skies empty of light pollution, scent is sweet with alpine flowers in the spring and summer, and heavy and silent with snow in the winter. The views of the surrounding mountains of its namesake Armancette, Mont Joly and, of course, Mont Blanc frame a region which offers easier access to Geneva airport than the nearby Chamonix and far fewer South West London accents. 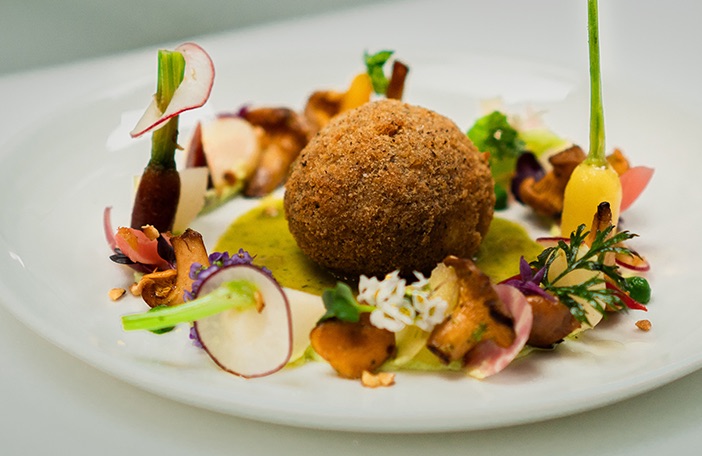 L’Armancette’s owner took holidays here as a child, and Antoine Westermann, the chef at their restaurant is a triple Michelin star artist who agreed to come out of retirement so he could work in Saint Nicolas and lead the restaurant team to earn stars of its own. Each plate is a work of art.  I will never think of pea soup the same way again. He made houmus interesting.  If you are fussy – as I am (no dairy/wheat/red meat/sugar), they cater for every need. Egg white omelette, gluten-free bread, sugar-free everything, no problem.  It’s in its DNA, too; the hotel was originally a bakery and part of it is still a bakery, offering guests freshly baked breads on the premises and delights such as the local blueberry tarts and alpine flower infused patisserie.

L’Armancette is like a trompe l’oeil. From the outside, the building looks like a large wooden Swiss chalet, with ornate terraces jutting out over the pavement, overflowing flower baskets bursting with alpine flowers. Inside there is a Tardis-like effect, a much greater sense of space, as the use of wood and stone, all local to the area, is used to create a sense of depth, warmth and sophistication. The large windows allow in plenty of light – as well as the views. 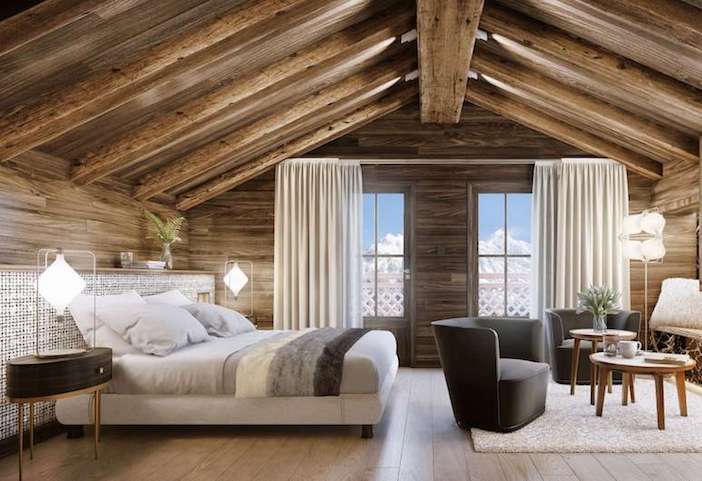 Each of the seventeen bedrooms is unique, using different marble in each bathroom, soft furnishings, and fabrics. The only consistent element is the view – and the rather fun Japanese toilets (which do everything but flush themselves). There is a very real sense of zen to the hotel. No hard edges, lights which turn on and off as you enter and leave each area, and wood which is so textured you will want to touch and stroke it as you walk by. In the spa, the pool is one of those half in/half out efforts, there’s a hammam and sauna, and beauty therapy area offering excellent massage and facials, all from the exquisite French Kos brand.

“Would you like to see the garage?” assistant manager Blandine asked me as I was given a tour.  It’s not something I usually care for on a tour, but Armancette is different. Artists have done a Banksy to the walls, turning it into the funkiest garage I have ever seen and a place where the hotel hopes to turn into a skate park – presumably when the cars (and there’s charging for the Tesla here) are not still parked. 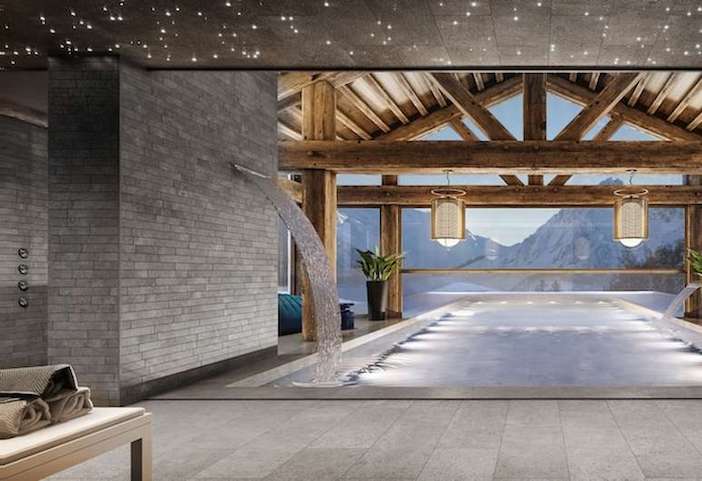 Although there is plenty to entertain and keep the guests inside (particularly as the outside is beautifully framed in every window), I highly recommend a walk to the church less than five minutes away. It is regarded as one of the most beautiful Baroque churches in France, and has a museum attached which offers more information on Baroque art. Venturing further, I spent a day taking the Mont-Blanc tramway- the highest cog railway in France, to the top of the Bionnassay glacier. 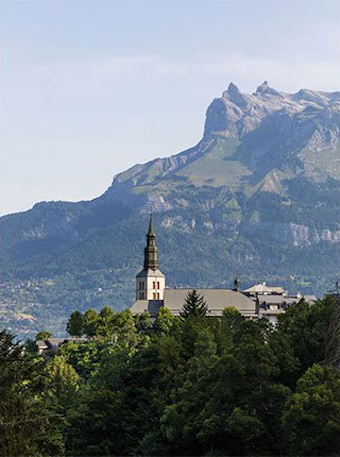 Built in 1907, just under seven miles long and reaching nearly 7800 feet, the gradient exceeds 45 degrees in places, and, as it turns, swerves and rises, you may wonder what is keeping it stuck to the side like some mountain goat, much like the elegant horned Ibex, who haughtily dare the climbers to cross their path. As I sat cross-legged contemplating the two-bedroom apartment I wanted to buy in Saint Nicolas, I could hear the glacier groan and crack.  ‘It’s okay, the mountain moves,’ my guide Jean reassured me, as if it were perfectly normal.

At the other end of the tram line is the thermal spa and baths at le Fayet, ‘Les Thermes’. But it is so much more than just a baths; it takes five minutes to drive from the gates through the gardens alone, passing waterfalls, gazing at people taking yoga and tai chi, walking along the river in the sun, while others practice their rock climbing.  This is the place where, two hundred years ago, they invented the concept of forest bathing – literally – by placing wooden baths in the forest.  The story goes, a fisherman recognised the smell of the waters and realised the warm sulphurous springs healed skin complaints.

Part of the original building still stands, but today it is a yellow-tinged stately home of a place set amongst rock face and forests. The spa was little known until 1961, when Janine Charrat, a famous ballet dancer literally set the fire alight when her tutu burst into flames and she suffered seventy degree burns. When conventional medicine gave up on her, she visited the baths, and after spending three weeks here, was able to dance again. The thermal bath today is split into two – those who come here for post cancer treatment and burns, and those who wish to just enjoy the benefits of the thermal spring. 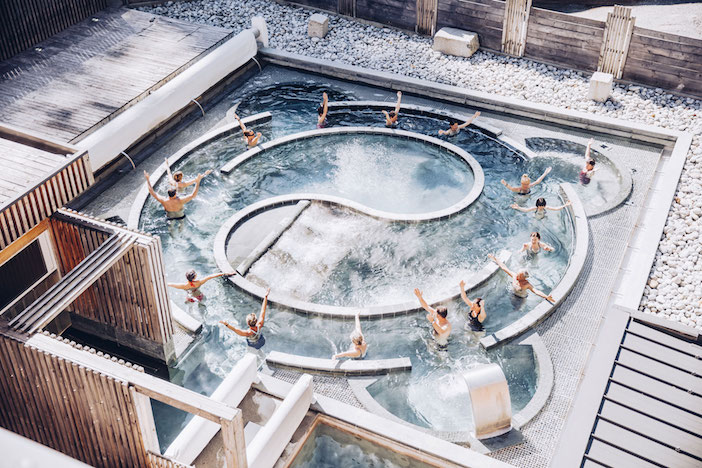 I spent a good three hours here. It began with a virtual reality experience in the foyer (which will turn you into a child) before entering the spa proper, which takes you on a journey (much like the spa water itself) from the earth’s core through the rock to the earth above. The outdoor area, where you experience various Jacuzzis, are surrounded by trees and mountains, which in the summer are vibrant with colour and scent.  Open every day of the year, including Christmas and New Year’s Day, you need to book in advance, but it is a must if you are visiting L’Armancette.

L’Armancette genuinely caters for all needs.  Even solo travellers are catered for. There is a singles bar overlooking the open kitchen in the restaurant where you can sit and gaze – as I did – at the chefs making their masterpieces.  You will leave refreshed, revived and chilled. And you will not want to leave. As I said – sublime.

L’Armancette is a member of The Leading Hotels of the World. Double rooms at L’Armancette start from €360 euros per night. For more information, visit www.armancette.com. For details of the Saint Gervais spa, visit www.thermes-saint-gervais.com.