Trending
You are at:Home»The Explorer»Spas»Lisbon: Licensed to Chill
By Sarah Tucker on December 29, 2019 Spas

Lisbon light has long been rated as something special. Allegedly a combination of refraction from the sea, the lack of pollution and the warm climate, as soon as you leave the airport, situated in the centre of the city, you will need the sunglasses. Even on a grey November day, as it was when I arrived, the light was crisp and clear as if gazing into an iceberg. This brightness lifts the spirits, and combined with the positive ions from the sea, the friendly culture of the locals, it’s an ideal place for an winter retreat. Which is just as well, because half an hour’s drive along the coast is Palacio Estoril and wellness spa.

Fifty years ago, the hotel, built in the 1930s, was well established amongst a select few, but then ‘Bond, James Bond’ arrived, bringing with it a Hollywood spotlight of its own. In the Second World War, as Portugal was neutral, European Royals made it their home along with German and English spies who allegedly drank vodka Martinis, shaken not stirred, in the bar.  I never rated George Lazenby as a Bond, but I liked the film On Her Majesty’s Secret Service (1968) in which he featured as the brief hiccup between Connery and Moore. 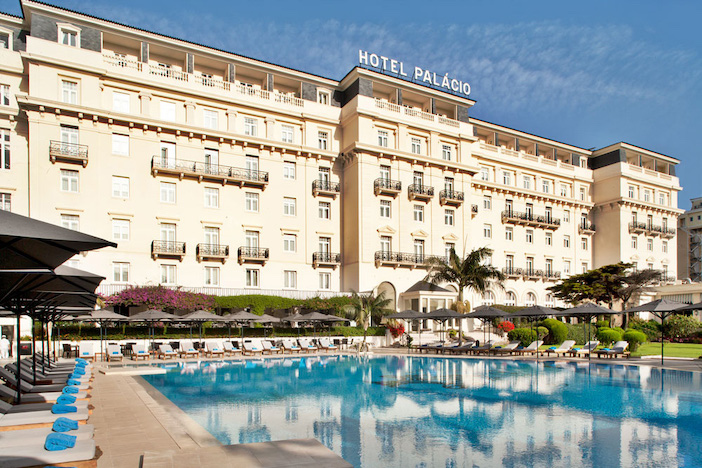 And the first image which emerges after the opening credits of the film, is Palacio Estoril. It’s a five star, old style grand hotel, veined with symmetrical well-lit corridors, the elegant walls lined with photographs of famous guests (Princess Grace, Queen Elizabeth, Tony Blair, Diana Rigg, and George, of course), mirrored and marble cocktail bar with muted velvet lighting and vaulted ceilings with large buffet tables where breakfast is served without background music and fuss. I dismissed it, but in design if not in energy, there is a touch of The Shining about it. 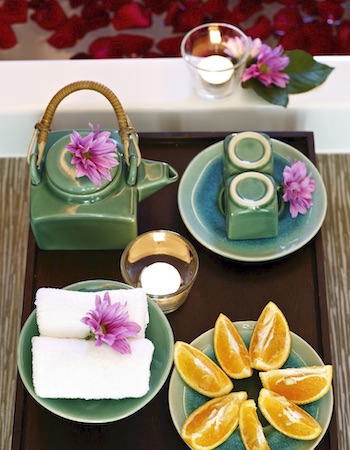 Adjacent to the hotel is the Estoril wellness spa. Taking up the top three floors of the building, the bottom two host the Banyan Tree spa, associated more with the Far East destinations of Thailand and Malaysia where it originated. There is a symbiosis between the two cultures – Portuguese and Thai – as both have service innate to their culture, and it shows.

This year, the spa won a prestigious Conde Nast Award for ‘targeted healing’, which appears rather obtuse until you look at the range of treatments on offer. You can visit on a yoga, detox, anti-ageing, or even medical spa package. I admit, I have always been cautious of those spas offering ‘medical support’ having experienced some Northern European ideas of ‘spa’, and found them as clinical as disinfectant.

This centre, thankfully, is different, largely due to the team of therapists and their skill in explaining the relevance and benefit of each therapy. There are the conventional treatments; the scrubs, the deep tissue massages et al, offered by the Banyan Tree, with therapists from Thailand who push all the right points to de-stress you as soon as you enter the room. And they are excellent therapists.

Move up to the wellness centre and there’s the water treatments. They don’t use the sea, like they do in thalassotherapy centres in Southern France, but use the local spring waters which are full of minerals and salt. Here you can sample the thermal baths, steam rooms, sauna and hammam, or try out the hydrotherapy pool, either in a group class, with Aqua T’ai Chi or with the therapist, Paulo, who specialises is Watsu – essentialy, underwater shiatsu. 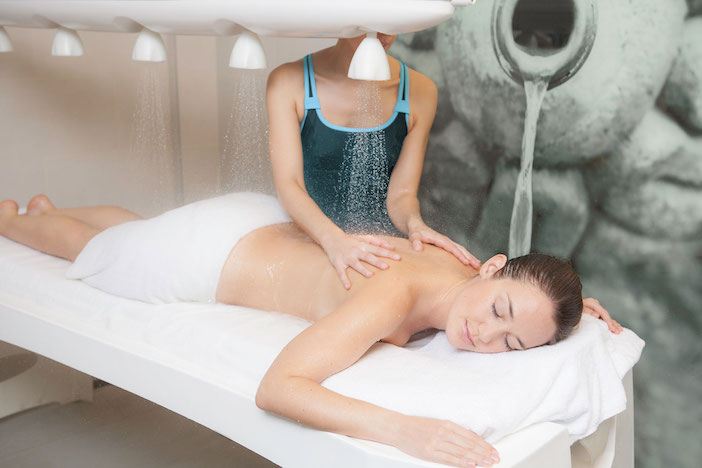 It is like going back to the womb – or outer space. Which I imagine to be much the same. I would highly recommend it for people who are under pressure, and have issues with letting go. There is an element of trust as you allow Paulo to lead you, but the experience has calmed even the most on-edge CEO, I’m told.  There are also various water baths and massages. Once you’ve had a Vichy Shower Massage you won’t want a conventional ‘dry’ one ever again. Streamed with warm jets of water, the only comparison I can muster is if you are being massaged by two people simultaneously, and that, as you can imagine, is quite an experience.

And then there’s the science. They can do a blood analysis, identifying what you are lacking and what you need, to avoid anything from varicose veins to dementia. The magnified images of the blood cells and platelets are fascinating – I’m going to blow mine up and hang them on a wall – and look like the discovery of a whole new universe, which, in a way, it is. 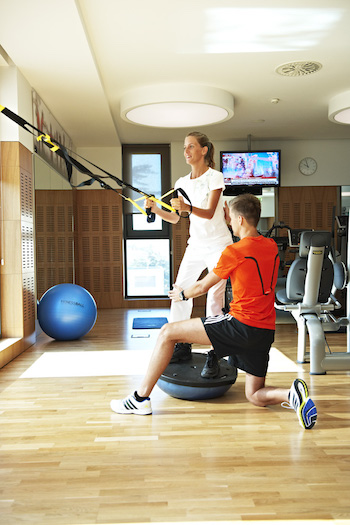 There are, too, osteopath and physiotherapist consultations that offer a deep insight into the body, mind and emotions which you wish you could have every day, telling you why we need to relax the diaphragm, and the lasting impact being on the mobile too much has on the body, as well as one’s self-esteem (closely linked, I’ve since learned).

Of all the scientific analysis, however, it is the biofeedback consultation, which astronauts have before they are permitted to ‘fly’, which is most illuminating. Bringing together known science with the ‘alternative’, clients are hooked up to a computer whereupon read-outs reveal any physical, mental or emotional conditions which need to be addressed before you can be blasted into space.

Up a level again, and you have the pilates and yoga classes, barre (ballet for sadists, ie without the free expression) and the postural re-education classes, which for someone like me, who teaches yoga, I found enlightening. The class is designed to teach people how to breathe, not just when exercising, but in life. It should be mandatory pre-yoga.

I was pummelled, stretched, twisted, pulled, steamed, balanced, dunked in water, floated like a baby, was told I have issues with betrayal and abandonment, self-belief, apathy and power – and that I am dehydrated. I have no cellulite and need more B12. And to think you might call this a service, let alone a holiday. But, on the plus side, I am mentally, emotionally and physically fit, flexible, and fun, which is good to know. As human MOTs go, for those over a certain age, I’d recommend this to everyone.

For more information about the Estoril Wellness Centre at the Palacio Estoril, including spa packages and rates, visit www.palacioestorilhotel.com.