Trending
You are at:Home»The Explorer»Spas»Spa of the Month: Dusit Naseem Resort, Oman
By Anna Selby on November 15, 2022 Spas

For the third of my trio of Omani spas, I’m in another entirely different part of the country – up in the jebel or mountains. Oman is the most mountainous country in the Arabian peninsula and the Al-Hajar range curves down from the Musandam Peninsula in the North all the way to the far north-eastern tip of the country. These are some mountains and their highest point is Mount Shams at 2,980m (9,777ft). I am staying on Jabal Akhdar, at a mere 2000m – though bear in mind that this is a third again higher than the peak of Ben Nevis, Britain’s highest mountain.

This is the wonderfully dramatic setting for DusitD2, Naseem Resort, a brand new mountain resort in Oman’s Green Mountain (the literal translation of Jabal Akhdar). And it is a surprisingly green mountain for this region. There is enough rainfall here to grow dates, a wide variety of fruit trees (even bananas) and the roses for which they are famous. Omanis head up here most of the year but especially in the summer when the heat elsewhere is unbearable. You can steam in 50C in Muscat in July but on the mountain it’s a mere 20-25C. 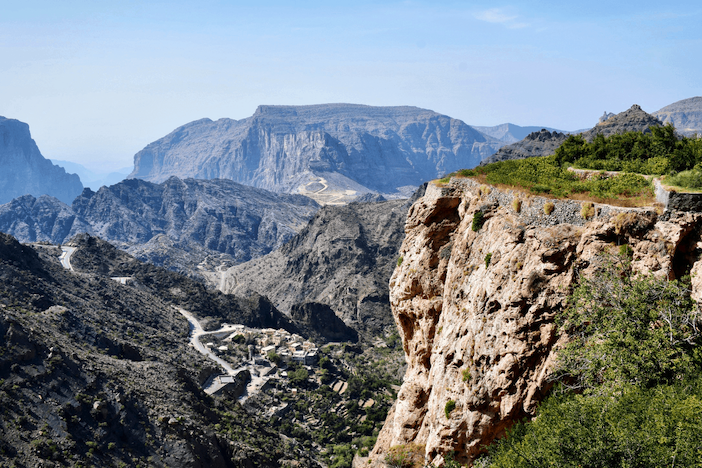 The drive is something of an adventure in itself and the roads are steep – only 4x4s are allowed up the mountain. The views, as you might imagine, are breathtaking. The mountain air is pretty good, too, and the night skies are a revelation for star gazing. Built around a wadi, the resort’s eco credentials are impressive. They recycle their water, they are paper free and they have built an environment around gardens with dates, fruit trees and roses. They are working with local farmers and are going to be making both olive oil and rosewater with them as well as having an on-site farmers’ market for guests.

There’s a gym, several pools and a very adventurous 8000-square metre Adventure Park – the biggest jungle gym you can imagine – for kids and competitive adults. But you can also go on walks and treks in the mountains – either hard core or something gentler involving a picnic. There’s plenty to see including oryx, gazelles, ibex and the incredibly rare Arabian leopard. You are just a five-minute drive from the Grand Canyon of the Middle East, too. 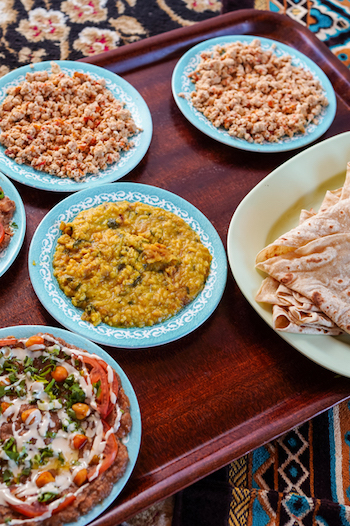 Although this is the last of my Omani spas, it was actually the first one I discovered on my arrival after an overnight flight with around two hours sleep. I arrived somewhat bleary eyed. I also felt a little light-headed with the altitude – or was that just tiredness?

Either way, a gentle day was ahead of me starting with a truly sumptuous lunch. This is a hotel that prides itself on its food and I really can vouch for this. Just don’t expect to lose weight if you’re treating this as a spa break. Dusit is a Thai company and there is a lot of very authentic Thai food on offer but alongside it there is Lebanese and Arabic cuisine, not to mention some European and other influences (Indian food is big in Oman as it’s just across the Arabian Sea).

It’s quite a mixture but, just to give you an idea, that first lunch comprised honey roasted pumpkin soup; smoked salmon with fruit compote; poached lobster with sauteed vegetables; and sugar-free trifle. I also had a wonderful traditional Omani dinner – spicy fish soup, mezze and shuwa (slow cooked lamb in banana leaf) – and one of the best Indian meals ever.

Hmm, so clearly a long walk in the mountains is going to be a necessity. But on that first day, I had a gentle afternoon ahead in the spa and a massage with Sharee. She is Thai, as are all of the spa staff and, unsurprisingly, they specialise in Thai treatments. 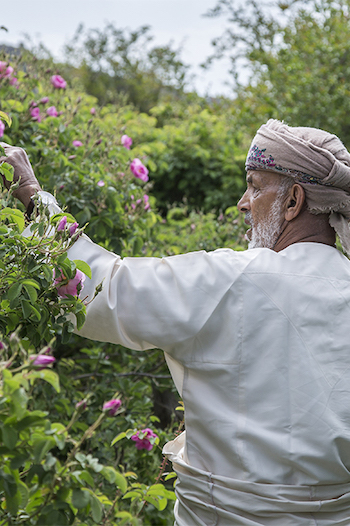 I was not actually going to have a Thai massage at this point, however, because that is pretty full on and, given I was feeling like a wrung-out dishcloth, we decided on a Body Balancing Massage. Sharee gave me a choice of oils and I plumped unhesitatingly for the relaxing one. The next hour passed in something of a haze – I was definitely suffering from sleep deprivation – but this was a combination of the more gentle strokes of western massage combined with the Thai use of pressure points and body weight. It aimed for relaxation and it worked. I think I slept (and I speak here as an insomniac) for about ten hours that night.

The next afternoon, though, it was time for my Thai massage and if you think this is going to be one of those gentle relaxing experiences that lull you to sleep, you can forget it. So, what is it really like? In the very strong hands of Sharee, it perhaps most closely resembles having yoga done to you and, while that means it isn’t you making the effort, what it does mean is that your stretching goes way, way further than you could ever have imagined.

So the first thing is you get dressed. Yep, that’s right. You do take off your own clothes but you replace them with Thai pyjamas. Now while the top is a simple affair – you just pull it over your head – the trousers are another matter altogether. They are enormously baggy and they do have a tie, but it takes me two goes to decide which is the back or the front. First time around, they would tie at the back – but that doesn’t seem right. I reverse them, tie them up but look with some confusion at the fabric gathered above – it looks a bit like a sack tied near the top. This can’t possibly be right. But when Sharee comes back she seems satisfied and we begin. 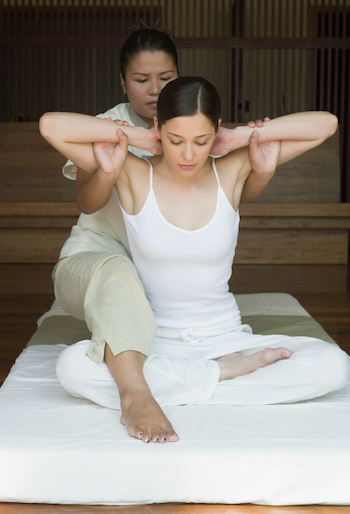 So, you remain in your pyjamas throughout your massage and there is no oil applied. Instead, you are stretched within an inch of your life. Sharee (she’s little, but believe me, she’s fierce) uses her feet, her arms, her knees, her hands and indeed her full body weight to arrange me into positions that would hitherto seem impossible.

Sharee tells me this is all very good for my circulation and it clears away any blockages in the system. I have to agree. There are moments when I can feel the blood throbbing and it feels like even my internal organs have a little bit more room.

Before all this, there is some breathing, some chanting, some chimes. But don’t be fooled. Before I know it, I am face down on a futon on the floor and Sharee is kneeling on the back of my thighs. This doesn’t seem too bad but then she starts working her way up my back with her hands compressing all of the air out of my body. And so it goes on.

Somehow she seems to get between my ribs (can that be possible?) to open up the spaces between them; then she is turning my legs into knitting; then I am being pulled back by my arms so the front of my body curves up like the prow of a ship. There are moments when I am winded, on the verge (never quite there) of pain, twisted and turned, pummelled and pressed (there are a lot of pressure points in Thai massage) and stretched in all directions.

I must have grown an inch by the time we are done and all brain fog has disappeared. It was quite wonderful and I think I may have discovered the antidote to jetlag.