Trending
You are at:Home»The Explorer»Spas»Spa of the Month: Hotel Plunhof, South Tyrol
By Anna Selby on June 11, 2019 Spas

So here I am in South Tyrol in – the part of Italy that thinks it’s Austria. And with good reason. Until 1918 it wasAustria – it only became part of Italy after the end of the First World War. And it still behaves like Austria. So German is the first language (Italian’s not a particularly close second), the houses are all chalet-style, there are those alpine churches that with the delicate spires perched on the mountainside. And dirndls – we’re deep into dirndl country here. So, whatever the map says, really we’re in Austria.

And, to be honest, probably not that much has changed visibly in the last century – the mountains and the villages are still pretty much the same. What have changed are the hotels. The Plunhof is a fine example of this. Still owned and run by the people who built the original chalet hotel (the Volgger family), it has developed into a state-of-the-art wellness destination with a vast three-level spa, opened in December 2018 – and there’s even more to come on that front over the next few years. So the middle floor is the Acqua Minera, the hydrospa with a massive indoor/outdoor swimming pool, indoor and outdoor hot tubs, a natural pool and huge relaxation areas. Part of the spa is beyond the main hotel in the “Salt Miners’ Building”. There are several saunas with different temperatures and, when you want to cool off, a direct path to Miners’ Meadow – though, be warned, this is a nudist area only, as is much of the sauna area! 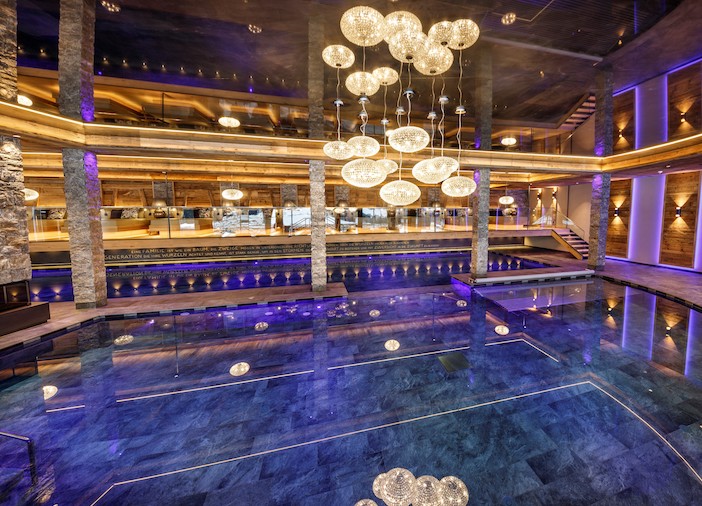 And here, there is a huge array of hot/cold treatments and we’re not talking any old saunas here. There’s a Grotto Realm from which you gaze at the panorama without, while sweating within (and there is something quite surreal in this, given you are gazing out at a snowy landscape). The Water Realm has fresh mineral water showers, troughs of ice, Kneipp baths and its own relaxation area. There are infrared cubicles, a Bio-Ofenkammerl organic sauna (a “soft” sauna) and a Silver Steam Boiler – this is a steam bath that uses the force of the South Tyrol’s silver quartzite in a balancing energy bath. And that silver quartzite was the centrepiece of my first treatment.

This part of the South Tyrol was a major mining area. It’s a history that is celebrated in the building of the spa itself which features local rock, as well as the ubiquitous alpine pine. Around the spa there are relics from the mining days, tools of the trade that include the carts that trundled through the mines. One of the most special rocks to be mined here was silver quartzite, formed around 50 million years ago when a strip of what was then coast rose up and became part of these mountains. This silver quartzite is regarded as “medical earth” (as certified by the International Academy of Holistic Medicine) and it’s rich in silicon which is believed to tone connective tissue and de-acidify the body. It contains, too, other minerals – muscovite (no not Mr Putin’s neighbour), zircon, titanium – and this combination makes this particularly good in massages that focus on the body’s energy. 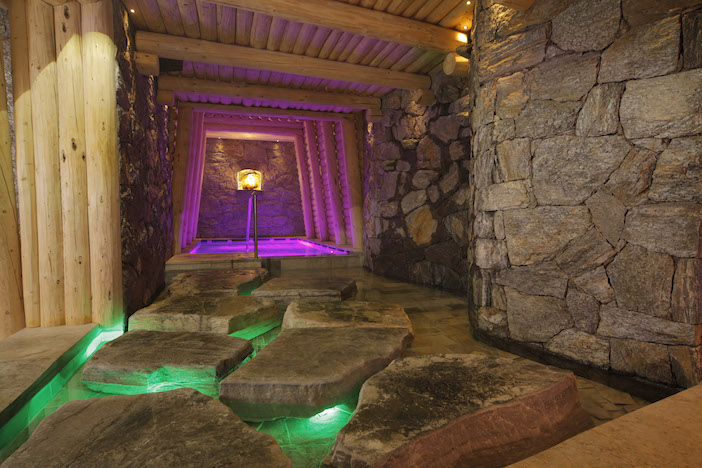 So the Silver Quartzite Stone Massage had quite a lot to live up to and, it became clear from the start, this was no ordinary massage. If indeed it was a massage. There were so many things going on here. For a start – and indeed right at the start – there’s what is described as “fumigation”. The room smells like a sauna, not surprisingly as it contains the kind of coals you find in a sauna along with alpine herbs. This is wafted over me, cloaking the body and mind in a kind of scented smoke. The only time I’ve come across this kind of thing was with a “medicine woman” in Ecuador, though admittedly the smoke there emanated from roll-ups that she puffed over me…

The next element is music. Or perhaps it would be more accurate to say a chant. This sounds, oddly enough, like a Native American one, very slow and hypnotic – and it is this chanting that sets the pace for the massage. And that pace is very, very slow with my therapist, Sara, applying the lightest of pressures. The silver quartzite stones are very, very hot and slide over the oil (lavender and hypericum) starting from the feet and working upwards. Some are shaped like rollers, some are square, there are several different sizes, but all trace the same slow, slow path until they are pressed deeply into energy points and left on the soles of the feet, in the palms, on the back or the crook of the elbow. When I turn over, the last ones are left on the heart, along the collarbone and on the third eye in the middle of the forehead. It all adds up to a treatment that leaves me utterly zoned out. Afterwards, I floated off to my room, found the loosest, most casual clothes I could for dinner and floated down the stairs to find there was a drinks party going on with music – the first song was one I was listening to the night before. Uncanny… 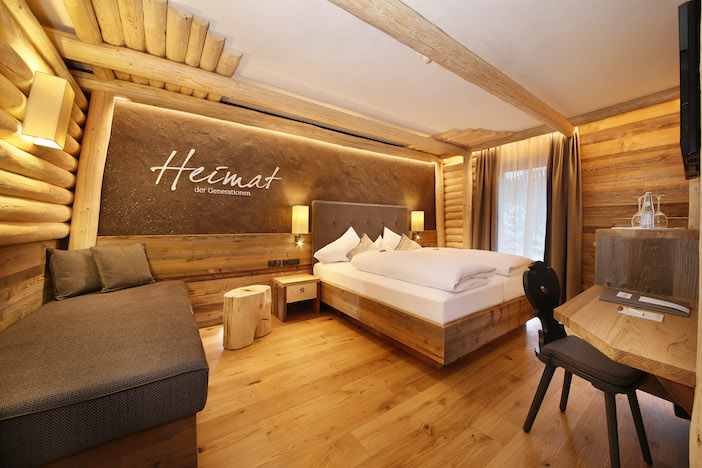 The next day and I’m back in the Spa Minera for the Pine Vitality massage – described as a ceremony for complete relaxation, though how it can beat yesterday’s on that front I can’t imagine. So today we swap the stones for – as you might expect from the clue in the name – wood. There’s no oil involved in this massage. Instead, my therapist, Marion, explains they use Swiss pine massage milk (with added arnica – I wonder if that’s for the bruises?). The wood comes in the form of pine in an assortment of sizes and shapes – rollers, “pebbles”, something that looks like a spatula, heart-shapes for the face. They, like the stones, are heated up – I didn’t realise you could do that with wood – and the massage begins. If yesterday there was no pressure, today there’s plenty.

The idea is that the heat from the rollers combines with the ingredients in the massage milk to get deep into the muscles, improve blood flow throughout the body and promote energy flow. Some places get more pressure than others – the backs of the legs, the back itself, for instance. Others (especially where there’s not so much flesh) it’s gentler. This is especially true on the face where the wooden hearts come into their own as well as Marion’s hands that do the final scalp massage, too. And, of course, there were no bruises. Until I’d tried it, I would have thought being massaged with a pair of what amounts to hot rolling pins was not particularly relaxing. Aah, how wrong I was. 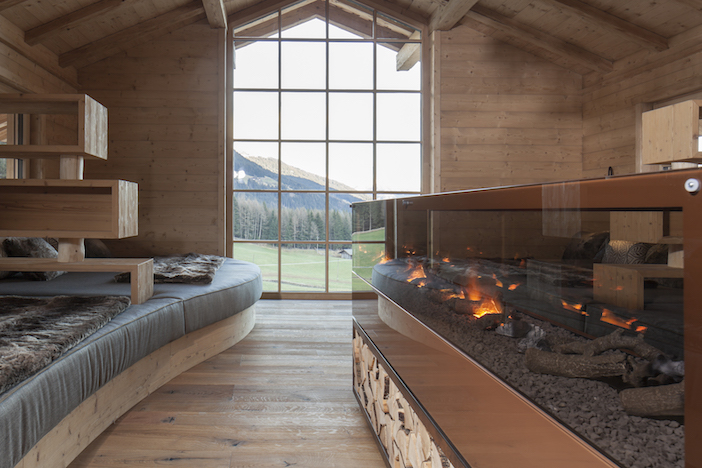 So far, so naturopathic. The next day, though, is a totally different approach. It’s time for the high-tech facial. I was to have a Dr Spiller Celltresor facial. Now Dr Spiller is a big name in bio-cosmetics in these parts and his aim is skin rejuvenation – a pretty big ask. So therapist Debra made a close inspection of my skin (involving some very bright lights) to ascertain my needs and set to work with a deep cleanse followed by an enzyme exfoliating mask. After that, it was time for the multi stem-cell serum for in-depth regeneration and then the second, main mask that was left on for 20minutes. This one was painted on with a brush over a thin paper mask and then massaged in at the end for optimum results. This massage continued more generally over the back of the neck and shoulders because Dr Spiller maintains that muscle relaxation itself profoundly rejuvenates the skin and helps relax strained facial features. And the results? Pretty good – my skin looked smooth and plumped-up and my eyes relaxed and yet wide-awake.

All of these delicious treatments were interspersed with swimming in the lovely pool, classes in the well-named Panorama-Active hall and relaxing in the Panorama-Relax room next door – both with breathtaking mountain views. Fortunately, there’s plenty of outside activity, too – walking in the hills in the summer, skiing in the winter. This is just as well because the food at Plunhof is exceptional. Just to give you a flavour – pink roasted duck breast with cognac-mandarin jus; Jerusalem artichoke cream soup with sesame shrimps; chicken breast stuffed with cheese, speck and figs. Hmm, better find those walking boots…