Trending
You are at:Home»The Explorer»Travel»Marrakech: Dream of the Red City
By Shana Ting Lipton on March 16, 2012 Travel

I’m lounging in my spacious, three-room Bahia royal suite at the Angsana Riads Collection in Marrakech. My private confines are so serene that only the beatifically haunting call to prayer punctuates the quiet. Still, raucous reveries fill my head… 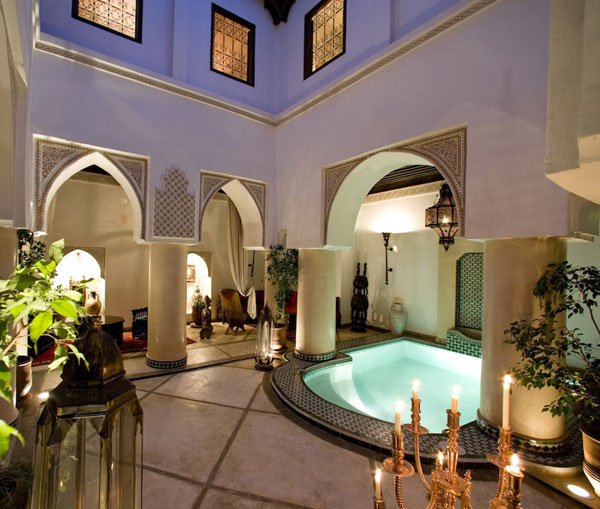 There, in my vibrantly-hued salon, through a haze of orange blossom incense, Keith Richards strums a guitar beside Anita Pallenberg, surrounded by cushions on a low sofa. Yves Saint Laurent pours a glass of Château Lafite Rothschild for Lord Patrick Lichfield in a reception room punctuated by 19th century objéts. Mick Jagger and David Bowie have unfortunately taken a liking to the four-poster bed in the master quarters; time to break up this fête.

It’s tempting to engage in such offbeat daydreams in Marrakech. The colourful, fantastical Moroccan city dates back to the 11th century but was re-imagined and reinvigorated in the ‘60s and ‘70s by rock stars, fashion arbiters and rich hippies. Post-millennial Marrakech has continued to draw the bling and branché – everyone from Colin Farrell to P. Diddy, Daman Albarn to Vanessa Branson.

The latter founded the Marrakech Biennale in 2005. Its 2012 edition (the fourth to date), pulled together local and international authors like Ben Okri, filmmakers like Gabriel Range and artists like Luca Pozzi for citywide exhibits and talks. The 2012 Biennale’s central Higher Atlas exhibition continues through June 3rd. From the looks of its opening soirée at the dimly lit La Salama (a trendy new restaurant / lounge just off the Place Jemaa el Fna), attendees are continuing to carry the torch first lit by the bobo jet-set of the Morroc’n Roll era. 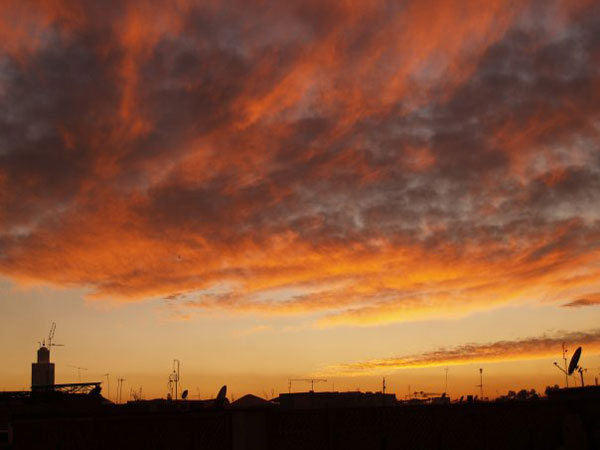 It’s easy to understand why such artistic torches continue to burn brightly here in Marrakech, a city whose namesake is believed to emanate from a Berber phrase meaning ‘land of God’. The air is rife with a piquant kind of divine inspiration. Mysterious creative catalysts operate via different senses here: sweet oil infusions wafting through the air, equally aromatic and rich-tasting chicken tagine; and woven fabrics, rugs and building materials brought to life by bleeding shades of ochre.

Similarly enlivened by crimson tones is the Si Said riad that houses my suite. The restored 19th century structure is the oldest of Angsana’s collection of six riads (lavish courtyard homes once owned by wealthy families). The 5 star Angsana Riads Collection consists of 41 rooms and suites, located in the Riad Zitoun district of Marrakech’s fortified historic city centre of the Médina. Five of the hotel’s riads are clustered together near the La Bahia palace and Dar Si Said museum. The sixth is located a short walk away in Kasbah, by the most famous of the 19 gates that lead into the Médina: Bab Agnaou.

I could have easily spent all of my Marrakech sojourn in the Angsana Riads – with my famous eccentric imaginary friends to entertain me, of course. A stay offers access to facilities in all six riads: a Thai restaurant, a Moroccan restaurant, a library, plunge pools, and rooftop terraces with views of the city. You can even take an al fresco cooking class atop one of the latter. 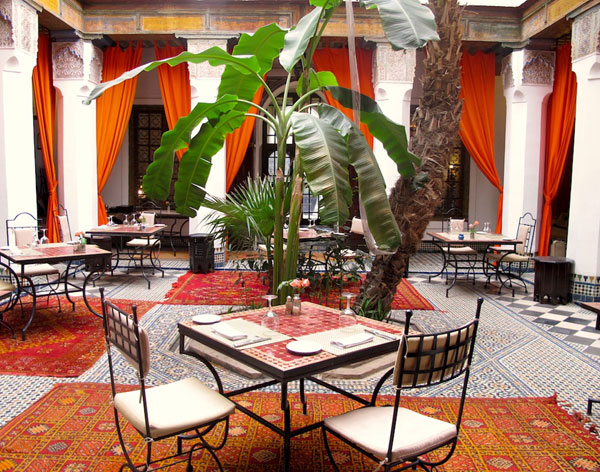 However, perhaps the most tantalizing sybaritic in-house pleasure is the Oriental Spa managed by the world renowned Banyan Tree. It is located in the Riad Bab Firdaus (which appropriately translates into ‘gateway to heaven’). Perhaps inspiration for Jimmy Page and Robert Plant who first visited Marrakech in the ‘70s? In this paradisiacal spot, such indulgences as aromatherapy treatments and Thai fusion massage await. Angsana’s hammams – perfume-scented steam rooms – transport guests even further back in time, centuries past.

Although the thought of sequestering myself in the beautiful hospice with its tadelakt plasterwork, giant palm plants and lavish rugs, was tempting, a footnote from my highly informative tour guide Youssef Rharrab helped motivate my extracurricular explorations. He explained that the reason riads are open-air is that, in the past, women in Morocco were rarely permitted to leave their residences; so it gave them the illusion of being outside.

That was the perfect excuse for this princess to go beyond the riad’s confines and northbound to the souks where tranquility was replaced by a lively scene of beeping mopeds, donkey drawn carts and entrepreneurial marketeers eagerly hocking their wares. 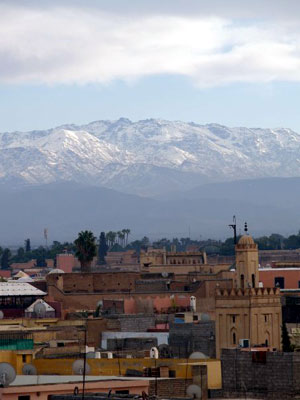 This at times overwhelming uber-market atmosphere is the central, pulsating force that drives many retail-inclined visitors to Marrakech in the first place. This is where the art of haggling is practiced and perfected. Admittedly, this isn’t one of my areas of expertise and excellence. So I just sit back and watch the more worthy players do their verbal dance in the name of inexpensive throws, rugs, dishes, jewellery, artwork and musical instruments.

Respite from this labyrinthine land of wares can be found beyond the Médina’s high terra cotta walls, around the modern quarter of Guéliz where the Jardin Majorelle is situated. In 1980, the lush and chic 12-acre garden was acquired and restored by Marrakech residents Yves Saint Laurent and Pierre Bergé. It not only offers a verdant respite from the ‘souk and the city’ hustle-bustle but also plenty of fashion shoot worthy backdrops punctuated by walls and pots in eye-catching yellow and Yves Klein blue.

I can just see a young Veruschka flexing and posing in the jardin for some avant garde shutterbug. Or quite recently, Sofia Coppola using the evocative and mysterious backdrop of Marrakech as the location for her Marni commercial. The city always has and always will be like a living lab for Bohemian creatives around the globe.