Trending
You are at:Home»The Explorer»Travel»A Week in The Gambia: The Smiling Coast
By David J. Constable on August 10, 2014 Travel

David Constable is not someone unaccustomed to straying from the beaten path, so who better to send to one of Africa’s lesser known destinations. In this first part of his travelogue on The Gambia, David begins his adventure straight off the plane in the capital…

Banjul is one of the world’s forgotten cities, rarely mentioned in guides or discussed in travel writing. So I went.

I arrived into the small (“International”) airport in the evening and was immediately mobbed by taxi drivers (or so they said) and enthusiastic luggage-carriers, all climbing over themselves for my custom and the chance to earn a few Dalasi.

Waiting in Arrivals were an abundance of young muscly black men, there to greet returning girlfriends and fiancés from the UK, all of whom were considerably older and heavier than the men. All the women appeared to share the same sagging sun-damaged skin, having spent holidays on the African coast where they’re shown the affection lacking at home. Perhaps this, I thought to myself, is why the country is referred to as the Smiling Coast?

The story of West African ‘bumsters’ is a familiar one. Swaggering beach gigolos looking for love, and a passport. But most are simply harmless scroungers trying to make a wage and offering tourist advice and genuine affinity. I’m more afraid of the Brit-travelling heffers.

Before even leaving the airport, this struck me as a place busy with colour, activity and soaring emotion. Young men seemed to go to great lengths in an effort to escape, while my plane from London, via a stop-off in Freetown, Sierra Leone to collect further passengers, was full. Tourism appeared to be thriving in the smallest country in mainland Africa.

Banjul itself is a cluster of reddish colonial architecture and administration buildings amid the smell of sweat. Roads are setup in a grid system like the blocks of New York, with hundreds of battered taxis from a life of crashes and close-shaves, each redundant of suspension and seat belts.

The city is one of the smallest in Africa. According to the 2013 census, Salisbury has a larger population than the capital of The Gambia. It was utilised by the British in 1816 as a trading post for suppressing the slave trade, and when the country gained independence in 1965, it continued as an important strategic port on the west African coast. 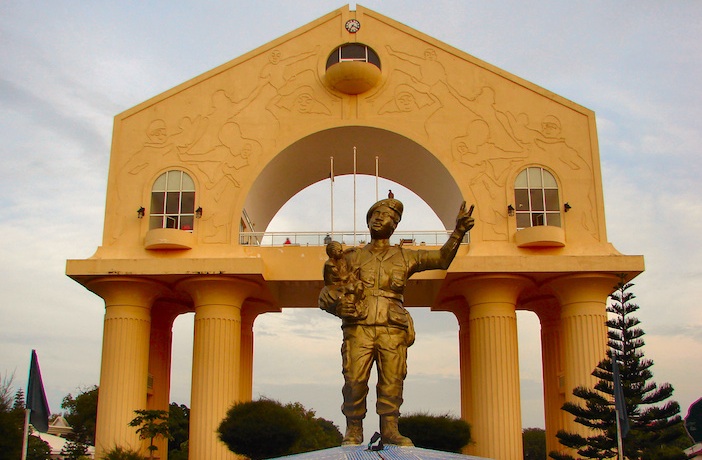 Arch 22 marks the entrance to the city and commemorates the military coup d’état of 1994, when President Dawda Jawara was overthrown and replaced by the current President Yahya Jammeh. Winning his fifth term in 2011, he has since been criticised for his human rights record and use of capital punishment, yet posters decorate the walls and lamp posts throughout Banjul, wishing their leader a “Happy 49th Birthday”. No one seems to question his politics, his ethics or the recent decision to remove The Gambia from the Commonwealth of Nations.

Perched on the Atlantic on an island at the mouth of the Gambia River, Banjul connects the south of the country to the north, in Barra. There’s no bridge or rail system so the only way to cross the river is by ferry, but this can take all day. So everyone drives, or cycles. I didn’t believe it when a friend told me that the country had only five traffic lights. In fact, they have seven.

On the other side of the city is the beach, mostly an itchy bed for lame dogs and the resting place of carrier-bags. Tall white pyres of grinded oyster shells appear sporadically across the sand like painted termite mounds. The meaty molluscs are removed and the pulverised shells mounted for eventual use as paint or cement. I watched as two girls aged five fought over an empty plastic bottle, one pushing the other hard into a solid knoll. 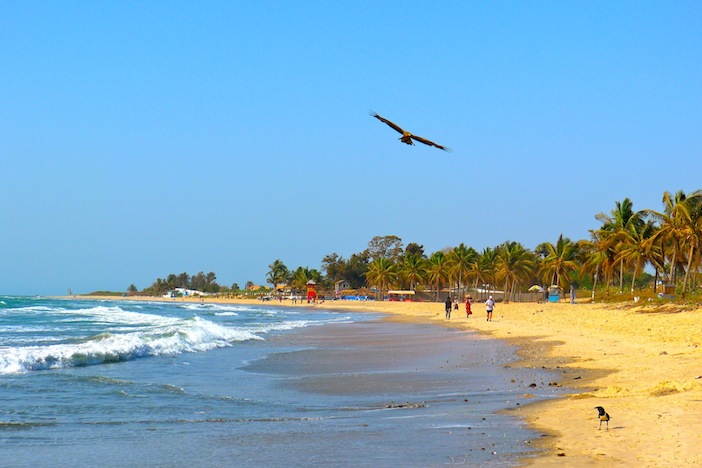 Almost all activity is contained to the coast. Few businesses, families or tourists travel east along the river into the dark continent, and towards the former slave town of Janjanbureh. This has created a hodgepodge of developments along the sandy Atlantic stretch, all prepped for the summer season and the onslaught of foreign sun-chasers.

There’s a surprising consistency of shack-shops neighbouring elaborate estates. Five-star resorts and private, palm-fringed beaches sit alongside squalid housing and dilapidated constructions. Many are incomplete properties in breeze-block compounds. For £50,000 you can build a mansion, but owners either run out of money or return periodically to add-on when funds become available.

Every few miles a makeshift butchers or barbers appears next to a large gleaming bank or fine-dining restaurant. Old men cleaver hunks of heavy meat in blood-splattered aprons and hang cattle quads from rusty hooks and disjointed portraits of Tupac and 50 Cent adorn the walls of barbers, advertising available styles and so-called trends.

There are no real distinguishable signs of where a rich neighbourhood begins and a poor one ends. So porky-blotched pigs waddle through the red dust and into the car parks of Western Union, while roped goats bleat in high-pitch next to women selling ripe mangos on a mansion driveway.

None of this is sad. I mean yes, it’s difficult to see and one is overcome with a deep melancholy and jabbing guilt, but it’s my European sadness. I see a poverty and way of life that I could not comprehend. To me it’s the worst case scenario, removed of wealth and home comforts. To the children playing with tyres instead of dolls and throwing fists over an empty bottle, it’s just life.

At various stages of my travel, traffic is halted due to army check-points. The week before I arrived, four people died in a three vehicle pile-up on the Bertil Harding highway, and now armed officials are positioned every few miles. They peer into vehicles and in some instances, Dalasi is exchanged as a requirement to pass. Other traffic stops involve wandering cattle and the refusal of a three-legged dog to shift from a junction.

Leaving the capital and the beaches for the neighbourhood backstreets, I soon understood why so little is confined to the capital. It’s not only that the size of Banjul is limited by its location, but activity is at its most bustling and rewarding where people work. In many cases this is where they live. So nearby towns such as Bakan, Fajara and Serekunda are expanding rapidly, as neighbourhoods swell into severely over-crowded meet-and-greet makeshift markets.

Because the country is unscathed by the corporate web of retail, families setup shop and create the necessary businesses. This plays a significant role in the culture and history of The Gambia. They make, buy and sell what they need, rather than overload with the unnecessary. Any souvenirs or bric-à-brac is for tourist consumption only, and a means of extra income.

I see women selling fabrics and fallen fruits. Others sell vegetables and spices. In Brikama a mother and daughter carry floppy bags of cold water on their heads for sale, and in a scrapyard in Kololi, young men sold salvaged iron and lead, inviting friends to join them in the hot afternoon to drink freshly brewed Attaya, a sweet tea using Chinese Gunpowder Green Tea.

You’ll find nightclubs, casinos, live music venues and rife prostitution on the Senegambia Strip in Kololi, along with tourists and wealthy residents, but it’s beyond where the country’s vibrancy and the actuality of the people can be found. In the swollen neighbourhoods and hinterland of The Gambia, where you’ll find the noise and bustle and the dirt and the grime. Where the spirit and vitality of the Smiling Coast is present and ubiquitous, and worth hunting out.

For more information about visiting The Gambia, visit the tourist board’s official website.