Trending
You are at:Home»The Explorer»Travel»Jerusalem: On the Shore of Eternity
By Toby L. White on April 20, 2014 Travel

In the second part of his visit to Tel Aviv, Larry steps back through history during a day trip to the Holy City…

Jerusalem. The name alone conjures up imagery spanning millennia; the cradle of civilisation, of religious iconography, of Biblical lore, it is a city with an almost mythical status. It is one of, if not the single most significant city in the world; it has been settled since 3000BC, was captured by David, Alexander the Great and Pompey, sieged by Saladin, ruled by Persians, Egyptians and Ottomans. It is the Holy City, the Biblical Zion, the place where Jesus was tried and condemned, where Mohammed ascended into heaven. Its very name stems from the Semitic for ‘Foundation of God’. Irrespective of one’s religious inclination one cannot help but be entranced.

Certainly the landscape en route from Tel Aviv did much to confirm the image in our minds about this Biblical land. The road, Route 1, leads from the coastal plain and over low foothills before it curves through the Ayalon Valley. Known as ‘the place where the sun stood still’ this flat plain has been the site of countless battles through millennia, from the Ancient Egyptians to the British. And the nearer to Jerusalem we came, on a gradual ascent through the Judean mountains, it’s as if the land went back in time; villages dotted atop dust-coloured hillsides, given a soft focus through the heat haze, bleached rocks like curdled cream punctuated by scrub brush. I imagined walking through it in sandals and sack cloth, dusty and baked by the afternoon sun.

Suburban Jerusalem, far from feeling like we were going back in time, felt as though we were entering a new development as new roads and traffic management lead us into the city’s outskirts. Here Lego-like housing clung to banks of hills and slowly grew uniform in the characteristic sand-coloured ‘Jerusalem stone’. Rounding the north of the city, to our drop-off point, Jerusalem as you’d imagine it opened up to our right below us; the distinctive gold Dome of the Rock glinting in the harsh sunlight, so prominent among the rooftops and high rises of the contemporary city. 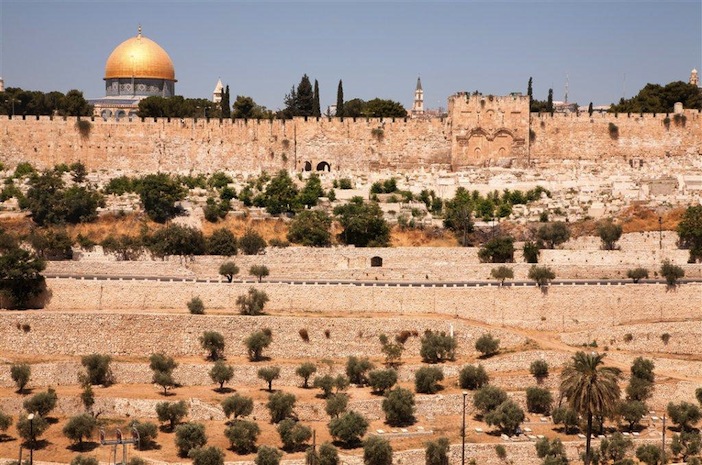 Our drop-off point – on which, in a manner of disbelief, I descended from the coach – was the Mount of Olives. It’s not quite the calming garden I imagined; the area is built up and hasn’t escaped the trappings of tourism with its fair share of hawkers and coach parties, but the view of the old city is no less awe-inspiring. As with anything based on one’s preconceptions pictures simply don’t do it justice, nor do they provide the complete picture. Falling away from the viewing platform down to the valley below is the Jewish cemetery, a series of sprawling terraces dotted with uniform tombstones, like a miniature low-rise city itself, the harsh midday sun reflected sharply off its uniform stone. A funeral was taking place, the black-clad Sephardic figures moving between the gravestones like binary blips on a white grid circuit board. Below that, the riverbed of the Kidron Valley. You might not be familiar with that name, but you’ll know what it’s famous for; the Garden of Gethsemane. And, then, far larger and seemingly more robust – even intact – than I’d imagined, the old city walls. It doesn’t simply sit there alone, however, us standing across the valley, eyeing it as men have done through the ages; today, beyond the picture frame of our imagination, the modern city sprawls, tightly-knitted apartment blocks clustered to the surrounding hillsides, TV aerials, lines of laundry on balconies and the omnipresent nose-to-tail traffic winding down the valley sides a vivid reminder of contemporary living in this ancient place.

We joined the line of traffic and made our way down the valley, past the Garden of Gethsemane to the Zion Gate. Here, before entering the city, were two key visits in the remains of a former Byzantine church on Mount Zion, now a site of the Jewish Yeshiva. The first, through an austere upstairs room, a desk clerk didn’t even give us a cursory glance as we passed into a vaulted stone chapel about 20 foot square. This, Iggy, our guide, told us, was the location of the Last Supper. Now, I don’t profess to have any religious proclivities but a shudder went through me as I took that in. As I looked around me, I wondered, though; this room wasn’t old enough, surely? It transpired this chapel, and the church that stood here, was built by the crusaders on what was believed to be the site of where the Last Supper took place. It’s no less moving, however, though the deflation I felt was time catching up with me; the room filled with tourists, an excited school party bringing the 21st century crashing back to reality. 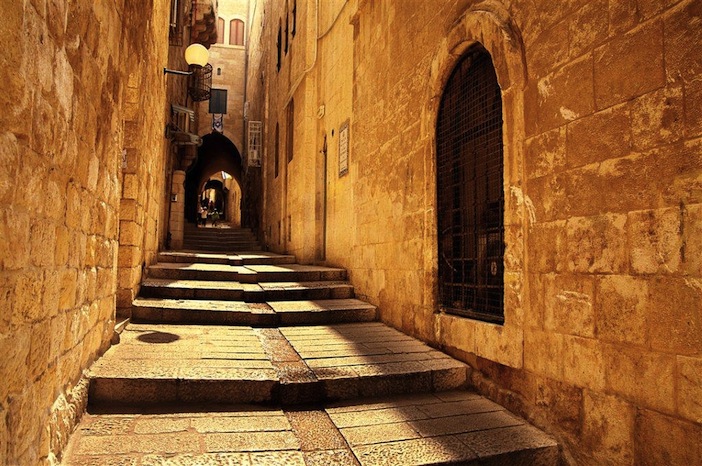 The second site here is, understandably, more moving. King David’s Tomb, similarly, might not be the final resting place of the man who defeated Goliath and captured the city 3000 years ago, the man Michelangelo immortalised in marble, but the solemnity of the moment entering this place of pilgrimage is an edifying experience, heightened by donning a yamaka and with a soundtrack of two orthodox jews chanting in the adjoining room as I awaited my turn to share the room with his spirit.

Walking through Jerusalem’s old city one is cast back 2000 years; the covered markets, the narrow stepped alleyways, small open squares, save the trappings of modernity, the hub of life here feels much as it might have done throughout history. As we walked through, Iggy described the city as being like an onion – an analogy often heard – in that its history is revealed layer by layer and that it features layer upon layer of history. Layers which come upon you round every corner; at one point, we passed columns of the old Roman Cardo – the main thoroughfare – and, as we weaved through jostling crowds, we joined the closing stages of the Via Dolorosa, the ‘Way of Sorrow’, a 4th century ceremonial path that follows the final stages of the passage of Christ as he made his way from his trial. Marked by its 14 ‘stations’, denoting points of key incidents along the route, it ends at the site of his crucifixion, on which now stands the Church of the Holy Sepulchre. 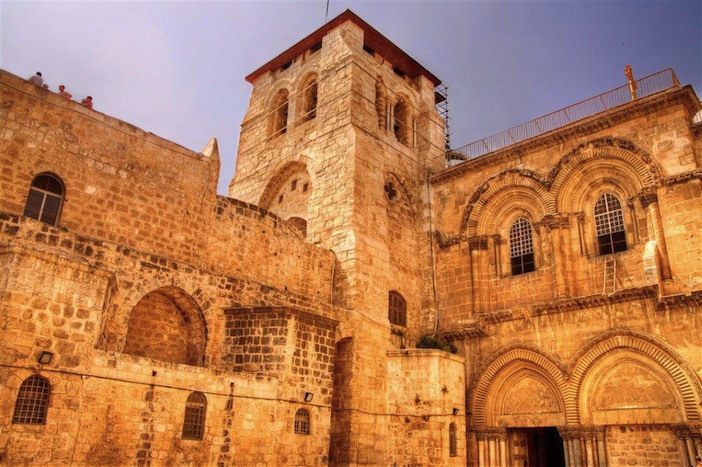 Save its size, there’s nothing particularly grand about this church; its construction in Jerusalem stone bears all the hallmarks of 4th century architecture; wide brick door arches and a tall, if oddly squat, central tower. Entering through the Crusader door, past polished stone flutes scratched with medieval graffiti, one joins hundreds of pilgrims, many taking it in turns to prostrate themselves over the Stone of Unction, marking the place where Jesus was taken down from the cross, anointed and wrapped in shrouds. On the wall behind, a detailed colourful mosaic portrays these moments. To the right, steep steps lead to the Calvary, a shrine where the cross stood, itself marked with a golden star and patient penitents lining up to crawl into a vestibule to touch the spot where Christ was crucified. To the left of the main knave, a huge chapel, illuminated by sunlight streaming through a hole in its yawning dome flanked by a golden sunburst, houses an ornately decorated stone mausoleum; the Tomb of Christ. Like many significant places in the world these are best not described, for nothing really does them justice. Better that they are visited, for each visit is a personal moment. This, understandably, is the holiest site in Christendom.

It’s remarkable to think that in a place that represents such significance for the three dominant religions of the world, living cheek-by-jowl in this one square mile, the day-to-day continues. Almost imperceptibly we were in the Arab Quarter, a transition I was only aware of when I noticed a change in the script on shop signs from Hebrew to Arabic. The most striking sense of the city came as we arrived in a market square, seeking a spot for lunch. As we assessed our options among the eateries and snack vendors, I was conscious their menus were all in Hebrew. Looking above the rooftops on the edge of the square, a church tower stood, distinct with its crucifix. Looking at that, holding a Hebrew menu, the sound of an Imam piped up with the Muslim call to prayer. 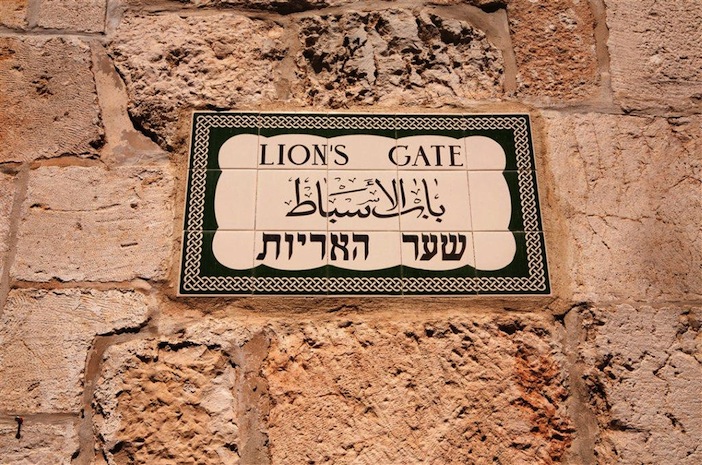 We had seen the golden dome, followed Christ’s footsteps and paid homage to the city’s founder. There was one final stop on what, it turned out, felt as much like a pilgrimage as any of those who queued before us at the various holy sites. Our last spot is the city’s most iconic; the Western Wall.

The remaining wall of Herod’s great second temple – a spectacular model reproduction of which can be seen at the Jerusalem Museum – was created by building four stone walls around the remains of Temple Mount, itself the site of the Foundation Stone; in Judaism, the site of the creation of the world and where, too, Adam was given life. It’s not as long as it seems, though is no less imposing for its height and the size of its stone blocks, constructed without mortar. As with most Jewish holy places, men and women have their own sections and men are offered yamakas before stepping foot onto the site. Not being Jewish I asked Iggy how one should pay one’s respects. He explained, quite simply, I should approach the wall, take a breath, place my hands upon it and contemplate. I do, and the cacophony of the crowds and a Bar Mitzvah underway nearby are dulled as I recede into my thoughts. I consider whose hands and how many others over time have been placed where mine are now, and what events have occurred on this spot on which I’m standing. 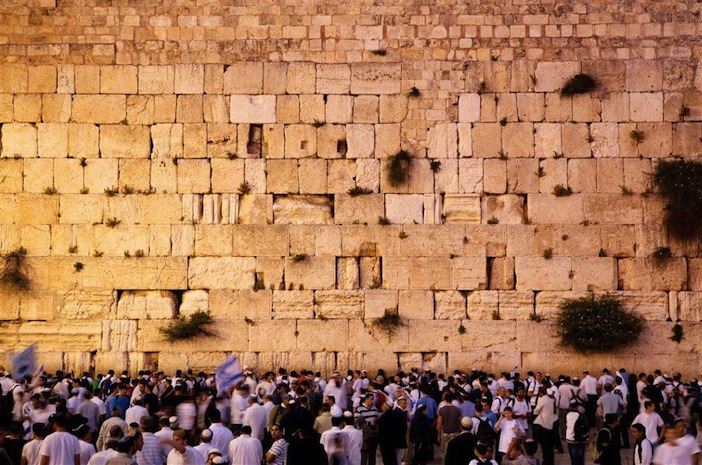 As a final act, I offer up a small, folded hand-written note, wedging it into the the creases between the stones to join the hundreds of other prayers and wishes brought by pilgrims to the Holy Land, leaving a small piece of myself behind in a place that has offered me so much. I can just make it out as I turn back for one final look before we gather again and exit the old walls by the rather more un-holy sounding ‘Dung Gate’, to return to Tel Aviv, delighted and humbled to have been.

For more information on Jerusalem, its sights, history and even ideas for your bucket list, visit www.thinkisrael.com.

easyJet fly direct to Tel Aviv from London Gatwick, the carrier’s newest route to the city. Services also operate from Luton, Manchester, Rome Fiumicino, Geneva, Basel-Mulhouse and Berlin. Flights are available from £87.74 one way including taxes. For more information and to book flights, visit the website.