Trending
You are at:Home»The Explorer»Travel»Kenya – From Coast to Coast, Part I: Lake Victoria
By Toby L. White on May 4, 2019 Travel

In a double bill travel special for the Bank Holiday weekend, Larry ventures across Kenya, from the rural calm of the eastern shore of Lake Victoria, through the Maasai Mara and landing at the bustling coastal town of Mombasa. In this first part, he encounters an unlikely corner of the cradle of human evolution, and a rather inventive fishing technique…

At the domestic terminal of Mombasa’s Kenyatta airport, the luggage handler checking me in is keen to tell me that Barrack Obama’s grandmother lives near our first destination, Rusinga Island in Lake Victoria, near the border with Tanzania.

It puts a curious perspective on things. We’re heading deep into rural Kenya, the view from the ten-seater aircraft is of a patchwork quilt of smallholdings, maize fields and corrugated iron rooftops; we land in a field, the terminal building (if you can call it that) flies a frayed Kenyan flag. We couldn’t be more distant from the heartbeat of Washington DC, yet there’s a tangible connection to something, someone so globally recognizable.

We’re here in rainy season, and are met with a downpour as we wait to taxi to the gate, but this is the ‘short’ one; the showers are swift and punchy, and mostly fall at night, the days are dry and bright, the temperature in the comfortable 20s the morning we drive out to Rusinga Lodge from the airstrip. 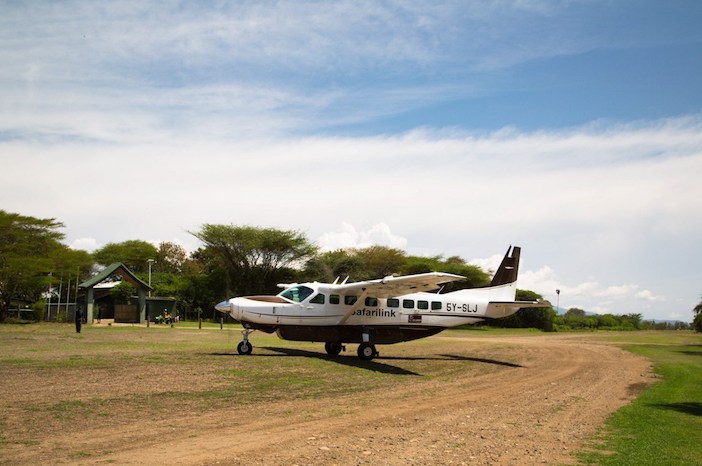 As a result the country is far more lush than expected; jade green grass, scrub bush, and the ubiquitous maize fields, skinny cows tethered to the roadside, distant mountains blue in the haze. We attract attention, a van full of Europeans, and we’re waved at and beckoned each time we slow for a speed bump through passing villages. The roads – or road, I should say – are surprisingly well maintained. I don’t know if I was expecting otherwise. I get the impression this is a part of the country seldom travelled by those who don’t live here. There is a refreshing absence of the modern; I saw one conspicuous advertising billboard on the hour-long journey. It’s simply not necessary.

As we approach the lake shore, we get a sense of its expanse. I see a group of women washing their clothes at the water’s edge, the morning sun shimmering off the surface making it particularly inviting.

Once over the bridge onto Rusinga Island we lose the road. The remaining half hour drive to the lodge is a lumpy dirt track, all adding to the sense we’re heading further and further from the familiar. And when we arrive, you can see why someone thought this would be a lovely spot for a quiet retreat. 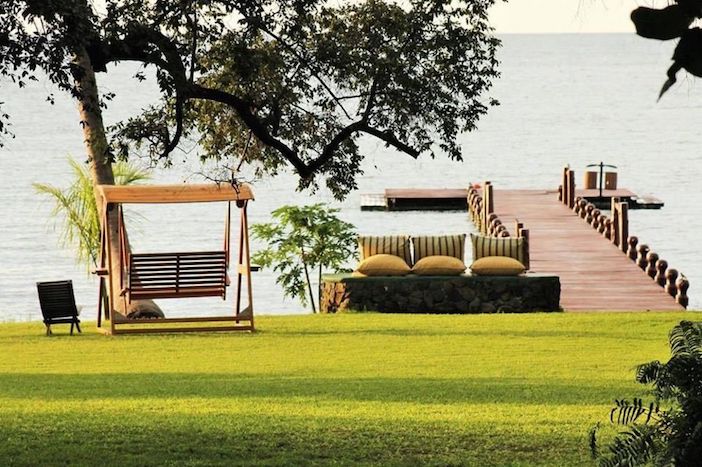 The aspect is delightful; we enter into a garden of huge fig trees and oleander hedges, providing a shade canopy that looks out into the lake. A long jetty runs out into the water, almost touching the horizon. Dotted about this Eden are eleven traditional Kenyan villas with high thatched roofs, a large veranda and en-suites with stone-set corner showers. All lodges have lake views and there’s a focal point of a large thatched rotunda housing the lounge, bar and restaurant.

Built in 1985 there’s evidence it’s not been updated much since, the villas are dark, even with the lights on, and with few amenities, but they’re clean and well maintained. As with other similar lodges, much of their appeal came with game fishing, its heyday in the 90s, of which a proudly displayed Fishing Leader Board (and a record of a 13 stone Nile perch) posts its last entry from 1998. The lake now, sadly, having been overfished, draws nothing but minnows. 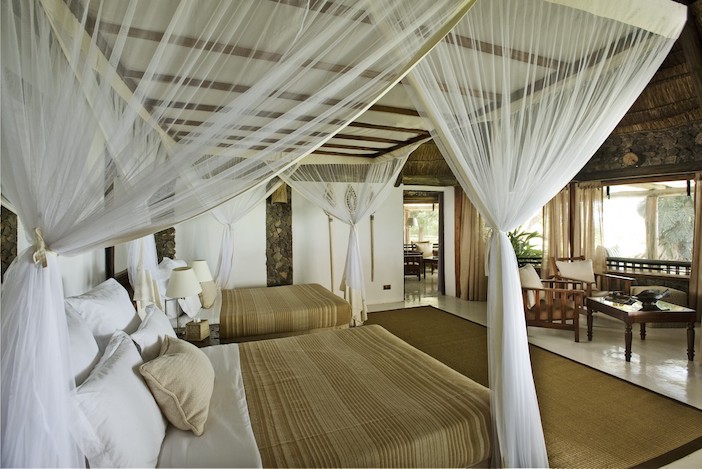 But it’s the lake that remains beguiling for many more reasons than a fruitless indulgent game sport. There’s something utterly delightful about breakfast by the shore in the shade of a ficus fig, the sun dappling the table through the leaves, a cool breeze taking the edge of the impending heat. It takes on a different look through the day; calm or choppy as the wind shifts, sparkling silver or rusty amber as the sun makes its way through the sky; and the jetty provides the ideal spot for a sundowner, watching the colours light up the horizon over the water before we make our way to dinner.

There are few such properties if Lake Victoria’s on your bucket list (Rusinga is the only one on the island – another, smaller and more boutique offering is on neighbouring Mfangano, and possessing what must be one of the best views from a bathtub I’ve come across). Its geographical position aside, Lake Victoria is an iconic emblem of Africa. With an area just shy of that of Scotland, it is a bird-lover’s paradise (the lodge has even published its own guide to the birds on the island), kayaking along the shore, black and white kingfishers dart from bushes and skim the water, cormorants dive with impunity, and bright yellow weaver birds, their nests dominating the overhanging shrubbery, shriek and rattle on your approach. This is to immerse oneself in somewhere rarely explored. 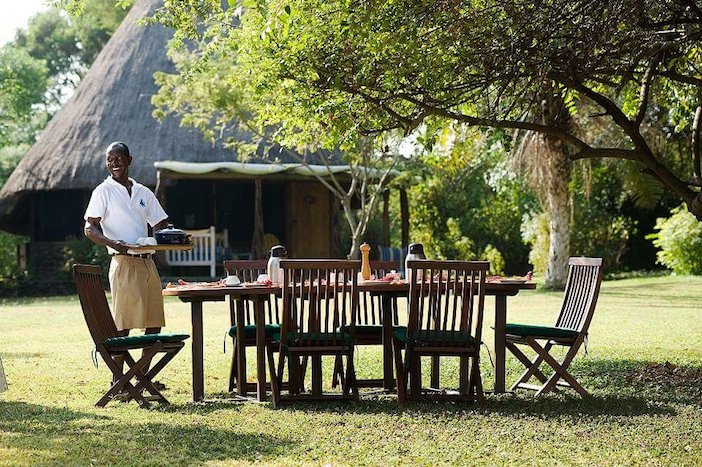 But there’s more to Rusinga than simply a pleasant place to stay. There’s a strong anthropological heritage to the site, too. Just around the corner, walking distance from the lodge, lies an archeological site where in 1948 Mary Leakey discovered a 20million-year-old skull that provided evidence of the origins of human evolution. It’s extraordinary that this corner of this small island, in nothing more than some lightly fenced-off land on the edge of a simple homestead, holds such a concentration of fossils and artefacts on human evolution. There’s not even a signpost.

Cynics might suspect the bones we retrieved were done so far too conveniently, or perhaps are either much younger, or from a different animal entirely, but it doesn’t remove the romanticism, nor the fact, that Rusinga is a site critical to human evolution.

The region is the home of the Luo tribe – one of a staggering 42 indigenous tribes in Kenya, whose geography, traditions and cultural idiosyncrasies impact Kenyan politics to this day – and to wander the fishing villages and homesteads near the lodge is a thoroughly educational afternoon’s activity. 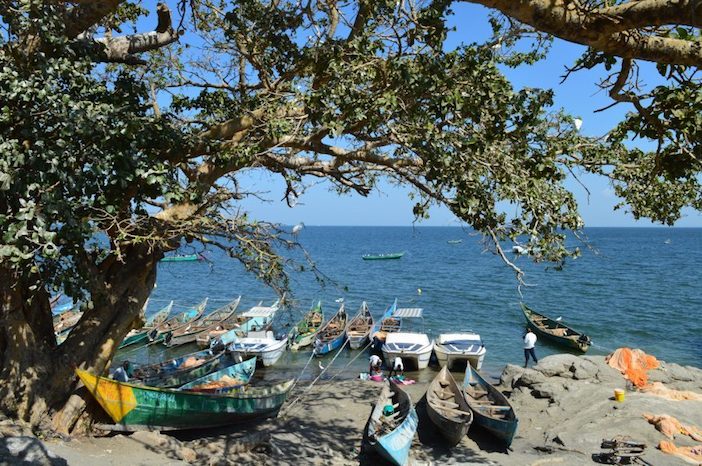 We’re given an insight into home building Luo-style, the layout of a homestead according to the order of one’s wives and children, and, most intriguingly, we venture onto the lake at night to observe the most fascinating and ingenious method of catching fish I’ve ever come across: floating lamps. You trail nets lit by lamps floating on frames on the water, the lamps attract insects, the insects attract fish, you encircle your net, and gather it in. Simple, really.

Rusinga’s tourist heyday – if there was one – may be behind it (HIV sadly decimated the region in the noughties; I was privileged to undertake a moving visit to a school founded for orphans of the epidemic) but while it may have lost a boon to the local economy, it’s not encumbered by the pervasive effects of globalization. That’s what makes it attractive. It is an experience that is raw and real, and represents a region that is seldom visited, but a real treat; a genuine off-the-beaten path adventure.

For more information about Kenya and its lakes, visit www.magicalkenya.com.