Trending
You are at:Home»The Explorer»Travel»Liquid Treasure Island
By Lucy Shaw on September 24, 2013 Travel

Two pairs of beady eyes catch mine, their pink pincers interlocked as if battling to defend their patch on the platter. All about them, shrimps curl shyly into themselves, winkles cling to their shells and a dozen oysters glint in the sunlight, iodine-drenched flesh waiting to be devoured. I’m on the Ile de Ré on a sweltering summer’s day gazing in awe at the platter of fruits de mer I’ve just been served at Le Skipper – a charming seafood restaurant inches from the dock in the port of Saint-Martin-de-Ré. The sky is powder blue and the few cotton wool clouds that have dared to invade the scene are low hung and pose no threat. Small white boats wait for their owners in the dock, their sails gathered like rolled-up pantaloons and masts reaching heavenward. It’s one of those idyllic days you know even as it’s unfolding that you’re going to savour; a day when the pace slows down enough to allow for the sharing of truths and the discussion of dreams. 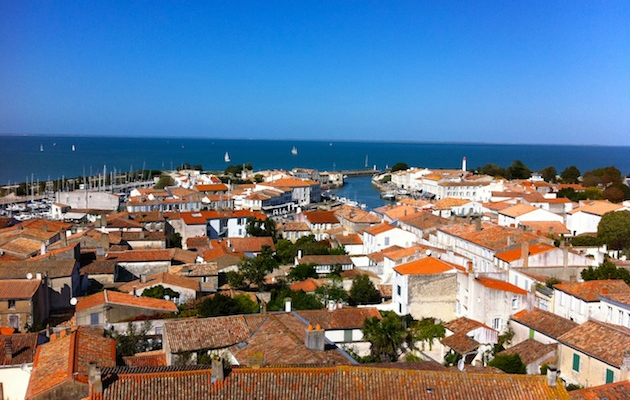 This little-known jewel off the west coast of France falls within the Cognac region – the land of brandy. Christened the “white island” after the salt marshes that fringe the coast and the whitewashed houses that gleam like freshly brushed teeth, Ile de Ré is just 30km in length and 5km at its widest point. The island is home to around 16,000 permanent residents, a figure that swells during the summer months when tourists flock in their droves to amble and bronze. Under English rule in the 12th and 14th centuries, Ile de Ré is best known for two things as a result of the period: rock salt and pyjama-wearing donkeys. Brought to the island to work on the salt flats, the Poitou donkeys, characterised by their chocolate brown shaggy coats, were dressed in blue-and-white striped trousers to stop them from being scratched by the salt and plagued by mosquitoes – a tradition that has been upheld ever since. Heads bowed and soporific from the afternoon sun, the betrousered donkeys I encountered on the island looked ready to hit the hay.

Ile de Ré’s greatest export is put to good use in the plethora of pastel-coloured ice cream parlours dotted around Saint-Martin, each offering signature scoop caramel fleur de sel (salted caramel), which thrived on the island years before us Brits caught on to its contradictory charms. Another flavour on offer is oyster. Not for the faint-hearted, salty and redolent of the sea, the frozen version is eerily close to the real thing. One lick was enough for me but my intrepid fellow traveller wolfed a scoop the size of a tennis ball, leaving him in satisfied silence for the remainder of our stroll. 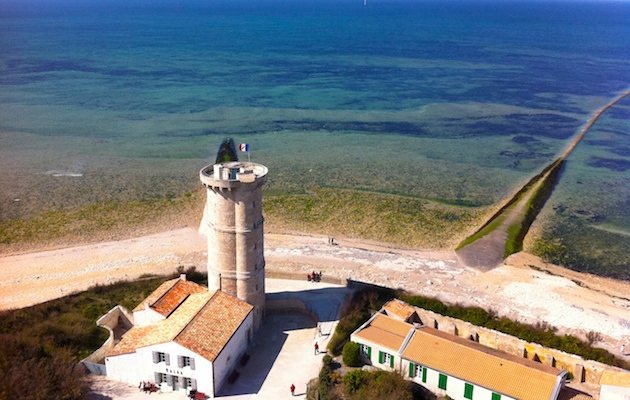 Set within five hectares of private land framed by the Atlantic ocean, awaiting me in my room at Hôtel L’Atalante was a tiny bottle of lavender scent to spritz on the pillows of my giant white bed to help me sleep. Assigned a ground floor room, opening the sliding glass door, I was inches from the ocean, punctuated by a lighthouse standing confidently in the middle of the water like a giant exclamation mark. Sitting on the terrace in my bathrobe at midnight, the stars were out in full force as if the universe had been brought more sharply into focus, some of them so violently bright they must have been planets. Looking out to sea, I noticed a shimmer from the lighthouse glowing intermittently onto the water like the green light at the end of Daisy’s dock Gatsby yearns to grasp.

While perhaps more traditionally associated with red trouser-wearing old men, since American rapper Busta Rhymes told Pharrell Williams to “Pass the Courvoisier” in one of his tracks a decade ago, Cognac has undergone a welcome transformation, becoming more hip than hip replacement. Most recently, Jay-Z has gotten in on the act with d’Ussé, a new kid on the Cognac block he was snapped insouciantly sipping from one of the gongs he picked up at the Grammy Awards earlier this year. Named after the French region in the Charente where it is produced, in order for a brandy to qualify as a Cognac, the grapes that go into it must be double distilled and then aged for at least two years in French oak – a VS (very special) Cognac means the youngest eau-de-vie in the blend is at least two years old, while a VSOP (very superior old pale) is four years old, and an XO (extra old) six. The revival of classic cocktails is seeing a renewed interest in the Sidecar; a blend of Cognac, Cointreau and lemon juice. The origins of the cocktail are disputed, though the Ritz in Paris claims to have invented it shortly after the end of the First World War. 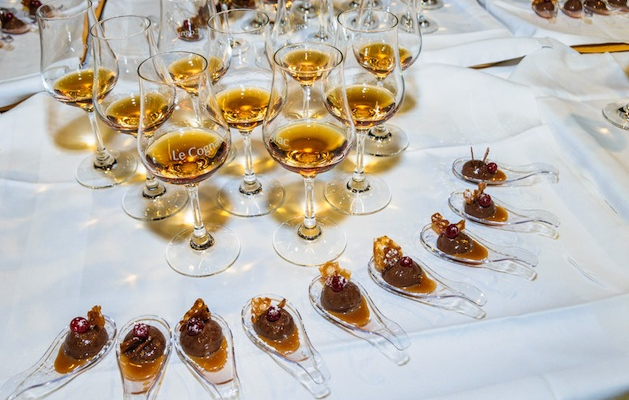 A Cognac novice before the trip, what struck me during a tasting at Courvoisier – Napoleon’s brandy of choice and the official supplier to the French Imperial Court in the 19th century – was the variety of flavours and aromas that can be found in the grape-based spirit. The younger examples are sprightly and floral, boasting notes of jasmine, orange blossom and honeysuckle, while the four-year-olds move into the realms of fig, peach, dried apricots and ginger, and the old dogs are more complex yet, packed with notes of tobacco, truffle, coffee, chocolate and cedar. I was also pleasantly surprised by Cognac’s versatility in pairing with different foods; the saltiness of the Cognacs made on the Ile de Ré mirroring its iodine oysters, while Cognac cuts through foie gras’ fat like a samurai sword through silk. 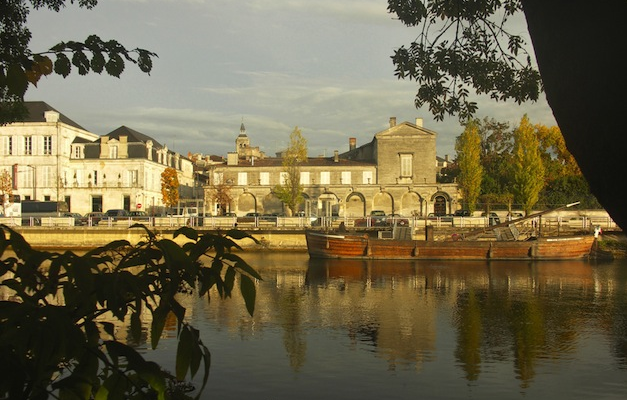 With the absinthe green Charente river running through it, described by King Henry IV of France as “the loveliest stream in my kingdom,” the town of Cognac is serene and as if lost in another era. A wall painting in the Courvoisier cellar of an idle afternoon boating on the Charente, parasols in one hand, thimbles full of Cognac in the other, has generated such interest that the house has turned it into a poster on sale in its gift shop. With fewer than 20,000 inhabitants, time moves slowly in Cognac, a land of cobbled streets, soaring spires, crumbling castles and glaring gargoyles. The region’s largest family-owned Cognac house, Camus, boasts a cliff-side cellar within a 17th century moated fort on the Ile de Ré. Distilled and aged on the island, Camus’ Cognacs have a signature saltiness imbued by the wind-whipped Ugni Blanc grapes grown close to the ocean. Sharing the saline tang of the Manzanillas made by the sea in Jerez, you can taste the island in the glass.

View Hotels in the Cognac Region