Trending
You are at:Home»The Explorer»Travel»Greece’s Two Graces, I: Santorini
By Toby L. White on June 1, 2013 Travel

This trip feels like it’s been a long time coming. It was conceived nearly two years ago over dinner at Quo Vadis, when I was told about the Grace hotels on Mykonos and Santorini in the Greek Cyclades. And now, sat at the poolside overlooking Santorini’s awe-inspiring caldera in the bright afternoon sun, I’m still surprised I’m here. 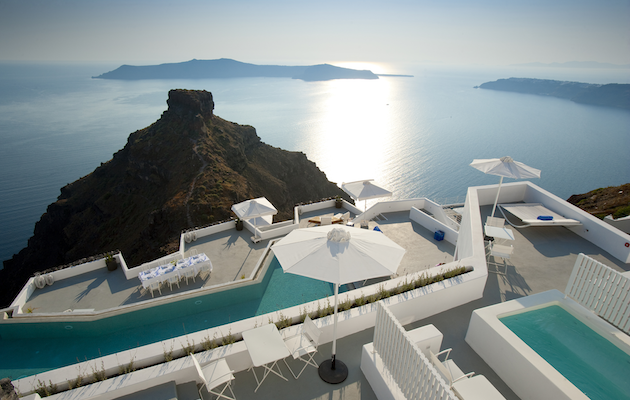 The island is unique among the Cyclades for having been formed from a huge volcano blast around 1650BC (which triggered a tsunami that destroyed the Minoan palaces on Crete to the south) and our first sight of it was in the fading evening light as the Seajet ferry approached. We had come in via ferry from Mykonos and, in contrast to the low-lying parts of Naxos and Ios that we’d just passed, its cliff walls loomed eerily before us with a near continuous trail of white-topped villages across its ridge making it reminiscent more of a snow-capped alpine vista than a Mediterranean island.

Once collected, weaved to the top, past Fira, the island’s main town, and into the quieter village of Imerovigli we were dropped and our luggage collected by Pericles, as fine and noble a man as his statesman namesake, who led us through the warren of cobbled paths and steps between hotel suites (and sometimes through them, it seemed) until we were met by Joseph, the General Manager, and two well-timed glasses of champagne at the hotel reception. A night time arrival negated the legendary view we’d been told about but as we made our way to the suite – a honeymoon suite, somewhat optimistically – Joseph reassured us, “It’s better this way,” he said, “it’s more romantic to wake up to it in the morning.”

The view could wait, for we’d entered quite possibly the whitest room I’d seen outside a Saatchi art exhibition. Walls, ceiling, curtains, bed, duvet, furniture, pillows, shutters, shower, all white. Broken only by the floor tiles. They were an off-white. It was nearly 10pm but it could have been daylight in there. With little time for much more than dumping our bags we were back out to the restaurant, dining poolside in a secluded alcove bathed in pink neon, for some inventive takes on Greek classics – sea bass moussaka – and a bottle of the island’s crisp white. From crisp white wine to crisp white linen and pillows pre-chosen as part of the hotel’s room-bespoking service (that also includes choosing one’s toiletries and even an ambient ‘scent’), a day in transit made it all the more welcoming. 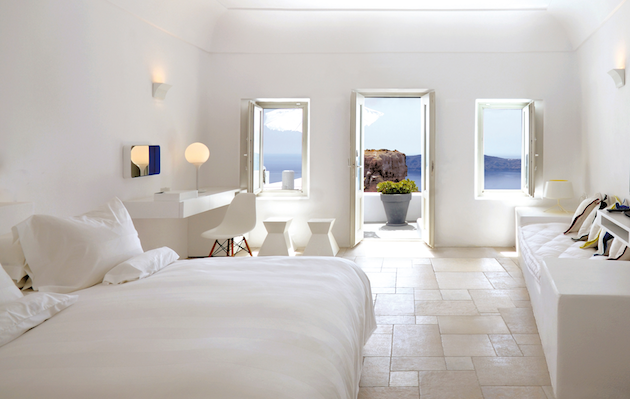 Jospeh was right. As we woke, Mrs L drew the shutters. As the sunlight streamed through the shutters, the room blazed like something from a scene in a Kubrick film. I was in bed, and I donned my shades. But the glimpse of what I saw lured me to the balcony. And if we thought the view from the boat was attractive, this was all the more so. The haze on the horizon merged the sea and the sky, broken only by the island the other side of the caldera, the height giving us a terrific vantage point to the deep blue shimmering sea below. I stepped knee-deep into the plunge pool, mesmerised by the view, watching a tall ship glide imperceptibly into the port way, way below us.

Following a bracing constitutional in the infinity pool – never more was one of these more fitting for such an environment – there was fruit and thick, rich Greek yoghurt for breakfast on the main terrace and I saw, too, how the hotel’s design seems to blend, seamlessly, the traditional soft-edged mortar work with the clean, angular lines of contemporary design. It’s as if this modern, refined incarnation of Santorini’s architecture emerges from an earlier draft of its former self.

We were soon back among the patios and balconies and weaving our way to Fira on the clifftop path. And here it’s easy to see why this makes such an idyllic honeymoon, even wedding, destination; the views notwithstanding, the whitewashed buildings, trimmed with that characteristic deep blue, and their intimacy in clutch of each other speak so much of an alluring romanticism. It’s no surprise we passed two brides having their photos taken against that backdrop as we entered the town. 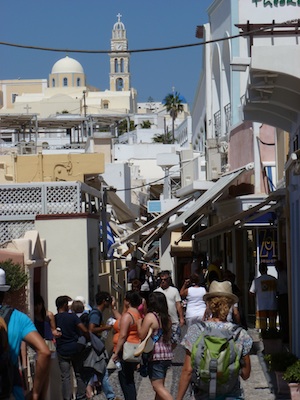 Fira bustles, as you can imagine, and mostly with tourists on a day trip, taking the cable car up from the dock. Unfortunately that combination of old world charm with its narrow streets and stunning views, and pliable tourist wallets does seem to attract the over-priced goods and tat that gets vended from the cluster of emporia around the main square. But, in spite of the transient consumerism, I was rather marvelling at the setting and we got far more out of it on the walk to and from the town itself. With our base back at Imerovigli we felt we had the inside track on things enough to avoid the disproportionately price-to-taste eateries in Fira, so opted for a late lunch at Anogi, a taverna near the hotel. Here coarse, rustic offerings of Cretan barley bread with feta, tomatoes and capers, and prawn ‘saganaki’ (baked with cheese and tomatoes) with a Greek salad (what else) were accompanied by the lamenting of a mournful folk singer on the stereo – it all felt very , well Greek.

With so much to try a light snack turned into a three-course meal. We’d spent the morning on our feet but I needed to walk it off and there was one place to go. Skaros, the name given to the huge rock facing our suite, loomed large from our room it was if I could reach out and touch it. It would give me a terrific vantage point of the hotel. I set off, down the steps past the tiny chapel below, and out across the lip of the cliffside. Once there, turning back to the hotel I marvelled at its construction. The faces of the caldera are nearly sheer. And if they’re not, they look alarmingly loose and unstable. Donkeys, apparently, were the secret. It took donkeys to get the materials there to construct the buildings that run along the top of this extraordinary place. 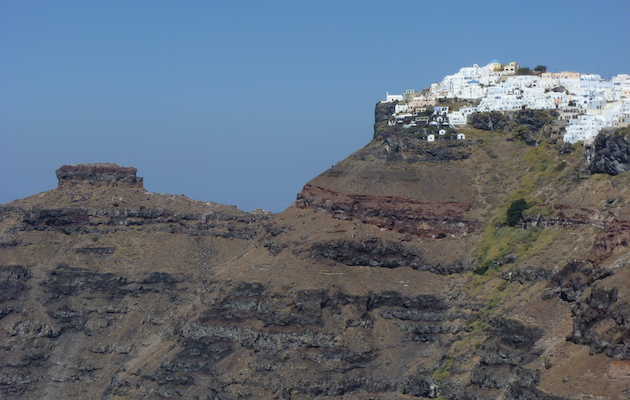 We were in danger of permanently eating on this trip. Not long after that late lunch we found ourselves back out and considering options for dinner. We had been recommended Selene, one of Greece’s finest and, we were told, the ‘father of Santorini cuisine’ at the helm. It may have been an opportunity passed up but the decision purely came down to whether to make the journey to Pyrgos, the other side of the island, or walk to somewhere closer.

Ten minutes later we were sitting down at Imerovigli Tavern. The decision was not made out of laziness, I should add; we’d spent the best part of the day on our feet and wished for something local. The fact we’d been local not two hours earlier was purely down to timing on our part. Here, then, we embraced more local fare; Santorini’s famous tomato fritters, and souvlaki – a kebab, basically – but then rounded off with a glass of Vinsanto, the island’s famous dessert wine. It had been a day of indulgent indigenous gastronomic excess.

Santorini is not a beach island. True, the other side away from the cliffs tapers to the sea and there are beaches, but none to write home about, I’m told. Santorini is all about the view and then it’s all about the best place to experience that view. Well, that’s plain to see. 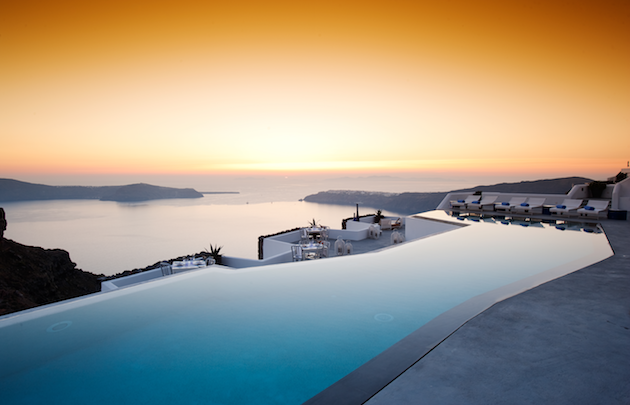