Trending
You are at:Home»The Explorer»Travel»Seychelles: The Princess and the Coconut
By Jessica Baldwin on June 14, 2012 Travel

THUD. I’m dicing with death here. That’s the third coconut to narrowly miss my head. In the Seychelles, more people die from falling coconuts than shark attacks. Despite this, I cannot move. I am paralysed, not by the coconut (not this time anyway), but by Desroches. It is without doubt the most beautiful island I have visited. Ever. 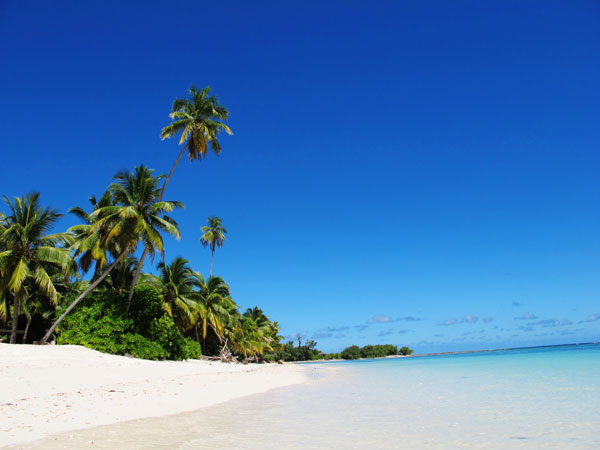 Floating aimlessly in the middle of the Indian Ocean, the coral island boasts 15km of powder white sandy beaches, acres of tropical jungle and some of the most luxurious villas on the planet. In fact it recently became home to the most expensive villa in the Seychelles, a snip at £10,000 a night. An island escape fit for a king no less. But do not take my word for it, ask Prince William, he swept Kate away on a make or break holiday there back in 2007 and we all know how that ended! The miles of totally isolated sandy beaches, crystal clear turquoise waters and private candlelit dinners must have floated Kate’s boat too.

Thankfully it is not only the blue blooded that can enjoy this private island experience, although deep pockets help. Desroches has been attracting the rich and famous for years. “Leonardo Di Caprio stayed in that villa,” my host points out as we whizz through the jungle on our golf buggy, the island’s preferred method of transport, after the private jet that is.

Stretched out on my lounger overlooking my private infinity pool, I am beginning to worry that this lavish life is becoming a little too normal. I have been treated like a queen since the moment I stepped into the Etihad lounge at Heathrow. “Champagne madam?” made a delightfully different greeting to the usual grunts I receive en route to my flight. The bubbles were followed by a beaming spa therapist talking me through the list of complimentary treatments I could choose from in the Six Senses spa. Having been pummelled into a dreamlike state I abandoned the spa menu and consulted the a la carte food menu; steamed seabass, fresh salads and juicy steaks replaced the usual airport slop and endless champagne washed it all down a treat. Day glow uniforms and claustrophobic seats seemed like a distant memory as I downed my fresh carrot juice and savoured my refreshing duck salad before bedding down to watch a film. 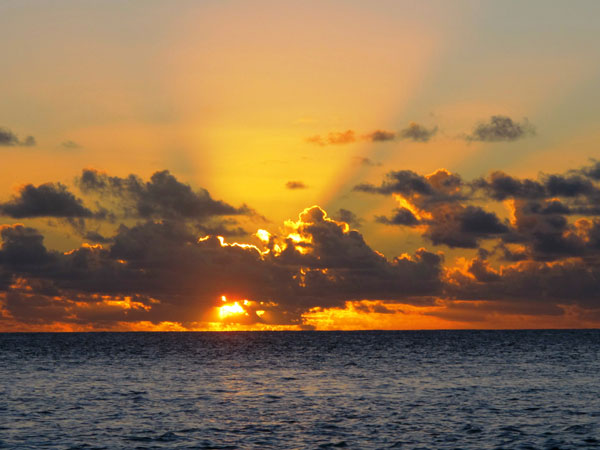 But this was just the start of my right royal holiday; no sooner had I stepped off the plane in Mahe was I met by an eager chauffer waiting to drive me to my first port of call, the Four Seasons.

“Welcome to paradise,” he said in a smooth Creole accent as he popped open a bottle of champagne and filled our glasses. Just minutes from the airport, the road sides gave way to colourful beach houses and chalky turquoise waters with fishing boats bobbing in the breeze to one side and steep forest exuding the evening’s rainfall to the other. Soon we were passing through the Four Seasons’ golden gates, “Now this is the real paradise,” he said as we peaked the small hill which gave way to breathtaking views of the sandy cove below.

A team of radiant staff greeted us with a refreshing iced hibiscus tea before taking us to our hilltop villa. Located amongst the lush tropical gardens, the spacious glass fronted property took full advantage of its picturesque position with commanding views of the ocean from every conceivable station; the beds, the bath, the shower…

I challenge anyone to take in that view and not immediately dash down to the hotel beach. Surprisingly quiet, its powdery shores are the perfect place to relax with a book to the soundtrack of crashing waves, or for the more adventurous the gorgeous James is on hand with his paddleboards, kayaks and other aquatic delights. 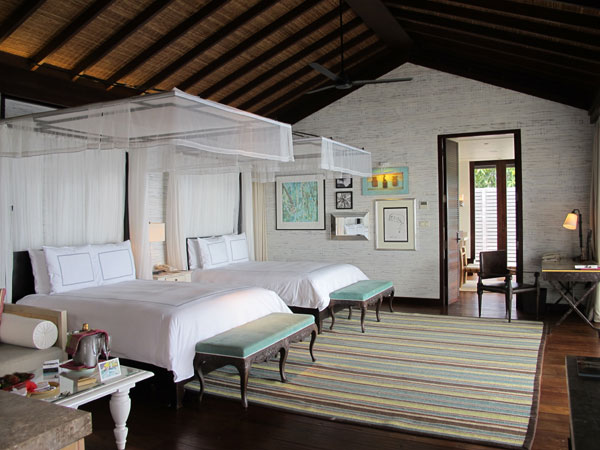 Lunch was spent at their elegant yet relaxed poolside restaurant, Kannel, where a delicious feast of spicy snapper ceviche awaited us. For dinner, Zez offers a more refined affair and a splendid menu featuring wagyu beef and freshly caught fish.

After an exhausting afternoon relaxing on the beach, it was off to the spa. A true destination spa, the stylish retreat boasts five treatment pavilions, a serene open-plan relaxation area and a secret rooftop chill out zone – the best spot in the resort to capture the stunning sunsets. With flight battered skin I booked in for their Marine Mineral Facial. The next morning my skin was glowing and I was ready to take on the jet set, at Desroches.

So, with our energy restored it was back to the airport, for an even more decadent flight…a private jet. Being a nervous flier (yes, I am in the wrong job, I know), I was feeling a little apprehensive as I boarded the tiny 8 seater plane. However, just minutes after takeoff I was far too distracted by the amazing views of Mahe at 13,000 feet to care. After just half an hour we were touching down on Desroches, greeted by a line of smiling and waving staff. It did not take us long to work out why they all looked so happy.

As our villa host opened the doors to our new home, my travelling companion Annika looked at me in shock as we were guided through the enormous kitchen and living area and through to our private infinity pool which gave way to our garden and personal beach. No sooner had he shut the door, we were high fiving in the pool, you know, our private pool…did I mention that already? 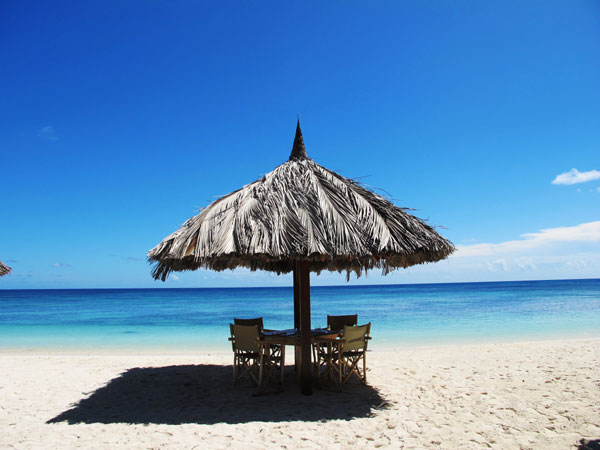 After an afternoon luxuriating in the Seychellois sun, we donned our LBDs and headed down to the beachfront restaurant, but you won’t find any Choos on this beach; it’s barefoot glamour all the way. This is one of the beauties of Desroches; despite being a magnet for the rich and famous, its beauty and class are inherent. Its style is more beach chic than bling bling and as a result you are more likely to bump in to Kate Middleton than Katie Price on these shores.

During our times at Desroches we enjoyed an array of delicious food, but there is no better taste than a fish you caught with your own bare hands…oh yes, Jess and Annika went deep sea fishing. I am not going to lie, our strapping yachties Kyle and Matt looked a little apprehensive when we turned up; me prone to sea sickness and Annika with a lifelong phobia of fish. And despite having chosen our new bikinis in favour of life jackets (awful tan lines, don’t you know) we were soon heading out to the ominously named Drop Off Point, where the shallow turquoise waters of the coral island are replaced by the choppy deep blue ocean.

“Yesterday we caught a tuna and we were too slow pulling it into the boat,” Kyle said. We vaguely absorbed the story but were more interested in absorbing the rays…until the ‘s’ word caught our attention. “And a shark snatched it; the bugger only left us the head.” Annika and I quickly pulled our legs back inside the boat and stared at each other as the colour drained from our faces. 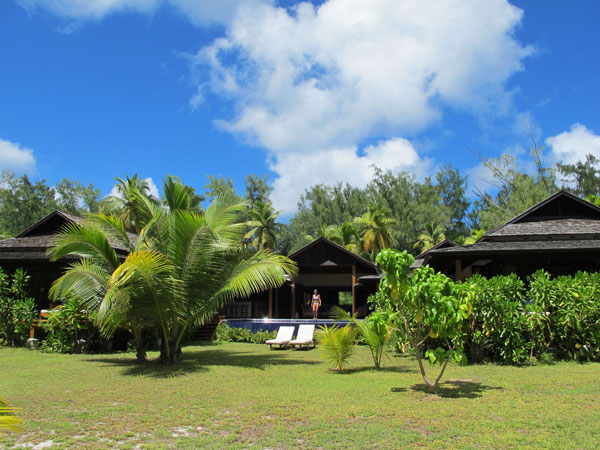 Five minutes in and I was desperately clinging to the side of the spray covered boat for dear life while I stared at the horizon in a bid to avoid meeting my breakfast. I was turning greener by the minute but I could not return to shore without a fish. “We got a bite,” yelled Kyle, “Jess, you’re up!”

Annika looked relieved, and still too scared to open my mouth I had little choice as the boys grabbed me and urged me towards the rod. Annika sat in hysterics as I repeatedly screamed “Get me my strap-on!” pointing towards the phallic looking belt that the rod clicks into for weaklings like me. I grabbed the rod and reeled my little heart out when I looked down and suddenly regretted wearing a strapless bikini. “Annika, grab my top!” She came at me with tears streaming down her cheeks.

My strap-on malfunctioned and I threw myself against the side of the boat for leverage as I heaved my catch from the sea, feeling like someone from a Carry On sketch. There it was, a beautiful, skinny and rather pissed off looking yellow fin tuna. Dinner.

I stared at the creature in disbelief but there was no time to parade my pride. “We’ve got another bite. Annika, you’re up!” he yelled across the deck. Annika, having had a lifelong phobia of fish, looked petrified as she was dragged towards the infamous strap-on device and clicked onto the heaving rod. Minutes later by some miracle her tiny frame pulled out an enormous Wahoo (that is a funny looking fish, not a yell of excitement).

As we clasped our prize catches and posed for photos, I felt a surge of pride; we had just wrestled our own dinner in the depths of the Indian Ocean – not bad for a seasick sissy and a fish phobic Chelsea gal. Having chucked the catch in the cool box we took up our places once more; Annika stretched out like a model across the deck, and me…desperately clinging to the side of the boat, staring longingly to see the shores of Desroches. 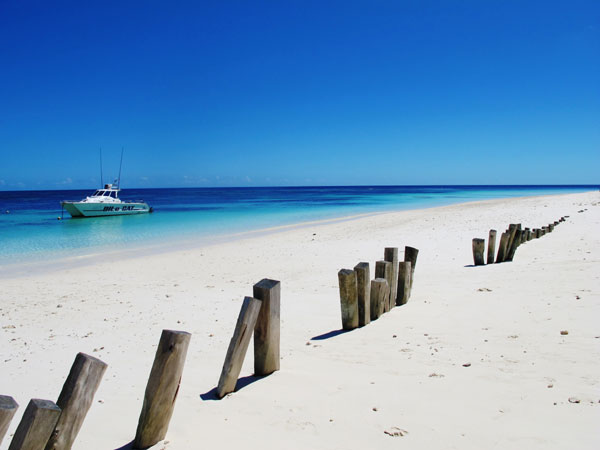 But, no rest for the wicked, no sooner had we stepped foot on dry land and two more handsome chaps were escorting us out to sea, this time snorkelling. With the tales of sharks still ringing in my ears, I was a little wary as I jumped off the boat but the second I saw what lay beneath I was captivated. The shallow turquoise waters were home to numerous coral reefs alive with everything from spiky crocodile needlefish and stripy snappers to crayfish and ornate coral. One of the instructors beckoned me over and urged me to dive down towards a cave to show me something; it only took one look at the sting ray for me to scurry back up to the surface and back to the mainland.

Once again as soon as our feet touched the sand we were led away to another boat. We were starting to get the distinct feeling we were not welcome on the mainland…until we saw the boat. As yet another strapping yachtsman held out his hand to welcome us onboard the enormous catamaran, we heard a pop as the champagne started flowing, and with that we cruised along the coastline watching the sun melt into the sea before returning to Desroches beneath a blanket of stars. As we made our way barefoot to one of the candlelit tables on the beach, we were presented with a delicious sashimi platter of our own tuna and wahoo. I bet her royal highness didn’t do that. Didn’t one do well!? Wahoo!