Trending
You are at:Home»The Explorer»Travel»Tel Aviv: The Spring Hill
By Toby L. White on April 18, 2014 Travel

In the first of a two-part feature for the Easter weekend, Larry sets off for Israel, embracing both its ancient past and vibrant contemporary culture. First stop, Tel Aviv…

I read it in The Sunday Times. Tel Aviv is the definitive place to eat hummus. A curious attribute, you might think, but an even odder aspiration; finding a small food stall in the middle of Jaffa’s old town. But since Tel Aviv was where I was going, it sowed a seed that tends to inspire a trip; an impetuous and imbecilic idea, like an itch that just needs scratching. Find the finest hummus in the land. Beaches, Bauhaus and the Bible could wait, I must find Ali Karavan.

Israel has an allure unlike most other destinations. For such a small country – the size of Wales, no less – millennia have made it a destination rich in history, in culture, not to mention politics, but there’s another layer; it’s one of those places that feels mysterious, it’s the seat of the great unknown, a land defined by the Bible, the Qur’an, the Tora. A visit to Israel is akin to a visit to one’s childhood, a country full of place names you probably knew before you could name your own town, names that have almost mythical status, that are so inked into our consciousness and which, in a modern context, seem odd. Names that when you see them on a road sign you think they’re made up; Jerusalem, Judea, Nazareth, Galilee. 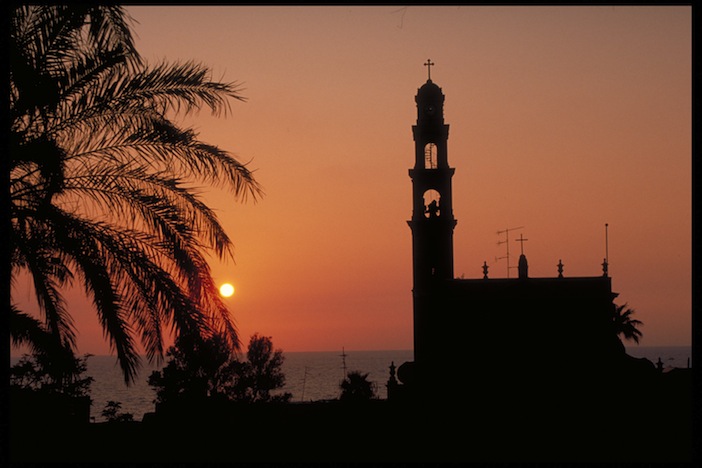 Any idea I was entering some mystical Middle Eastern land was immediately dispelled as I walked through Tel Avi’s Ben Gurion airport; you’d be forgiven for thinking you’d entered a sophisticated shopping mall for its shop fronts, polished stone and a fountain in the centre of the terminal. The country’s history is not lost here, however; a long slow incline to passport control past a chiseled stone wall complete with mural tableau fragments at the far end being a distinct reminder of its heritage.

Ancient it may be but first impressions painted a vivid contemporary picture; there’s a sense of the Middle East to Tel Aviv but with a more cosmopolitan, European feel. Its seafront is astride with imposing contemporary architecture, statements from top hotels that face West, out across the length of the Mediterranean, like beacons to the city.  The Dan hotel was Tel Aviv’s first, originally dating back to the 1930s, its distinctive colourful facade the work of sculptor Yaacov Agam added in 1986 is now a symbol of the seafront. Inside it feels less Middle East more eastern block with its squared, minimalist lobby but its assets do speak out: the en suites are marble, the ceiling contemporary stucco, the rooms are spacious, elegant and comfortable and the sea view takes in the full splendour of the mosaic’d esplanade completing the image of the Mediterranean seafront. As the sun sank through the sea and we made our way to dinner along the beach, in the distance, illuminated like Brighton pier, was Jaffa old town, a reminder of the city’s history distinct against its contemporary facade.

The odd thing about the old town of Jaffa is that it’s in better shape than the new one. The flea markets on the periphery suggest nothing more than the stall holders emptying their bins into the street and many buildings are either dilapidated or in a constant state or construction. 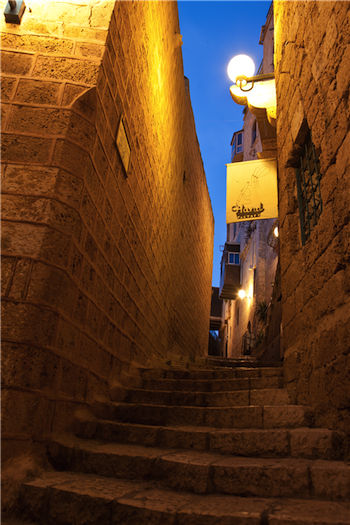 By contrast, Jaffa old town’s walls are so clean they look like they were erected yesterday. The faded turquoise street signs look ancient but I fear they’re reproductions, though, interestingly, they denote the signs of the zodiac as a nod to the sailors and traders navigating by the constellations. Inside, the trade is almost exclusively boutique art galleries catering for Israel’s thriving art scene, epitomised by sculptor Ilana Goor’s gallery and museum; an extraordinary labyrinthine display of cutting edge metalwork and objet d’arts woven around her own living space.

As new as it looks the old town does, in fact, date back to the first half of the 16th century, built by the Ottomans as an expansion of the old port, itself a key ancient trading post. That it thrived is no accident; if you had to build a key medieval hub, you couldn’t have picked a better spot; the middle of the eastern edge of the Med and the gateway to Asia, and at the confluence of the corridor of that great rift that runs between the tops of Turkey and Egypt; it’s the middle of the X that marks the centre of the ancient world. And it hasn’t escaped its Biblical connections either; perhaps its earliest connection is with Solomon, who constructed the first temple here in 1000BC; the Romans, too, realised its importance – noted, particularly, in the artfully arranged display and 3D film telling the town’s story at the Jaffa Tales exhibition, built and integrated around the excavated walls of a Roman house under the old town. It was here, too, on a Jaffa rooftop, that Peter had his revelation from God that he might eat all manner of animals thereby marking the departure of Christianity from Judaism, an event recreated by mural in the Franciscan church, St Peter’s church. That same church, in fact, whose illuminated tower is the beacon that marks Jaffa along the Tel Aviv coastline. It stands above the old port, not so much a port now, though, as a small marina and a sea wall, and not so much old now, with its contemporary new market space; a delightful spot to enjoy lunch, in fact. And, yes, I ordered hummus. That it was the best in the city, I couldn’t say, but it sure as hell beats the knock-off imitation silt from Sainsbury’s.

Jaffa has all but been absorbed into greater Tel Aviv now but its contemporary cousin was nothing but sand dunes and orange trees – hence the eponymous fruit – before the turn of the 20th century. It seems odd to think that for all its importance in ancient history what has come to be the significant coastal settlement and the country’s financial capital, was founded barely 100 years ago. 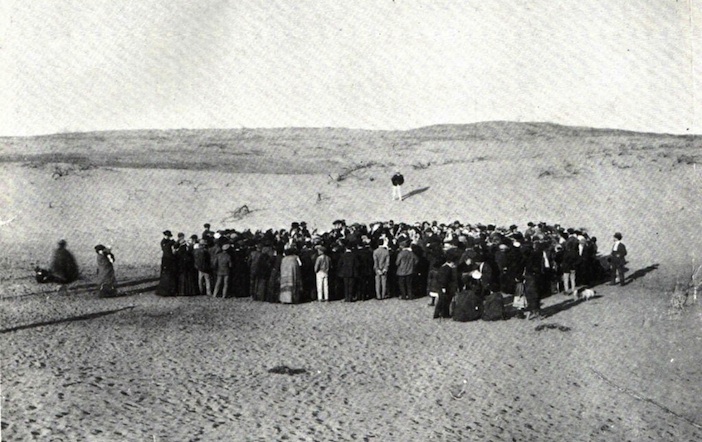 It began as a Jewish settlement in April 1909, as part of the Zionist ‘aliyah’, or migrations, when sixty-six families stood in the dunes outside Jaffa and drew lots by seashells for plots of land. This group intended to create a ‘garden city’, a modern urban centre, planned around aesthetics and clean living with running water and modern sanitation. They named it after the Hebrew words for a hill built from rubble, ‘Tel’, and Spring, ‘Aviv’; as a symbol for the old world and the new. A photographic exhibition of the burgeoning city is on permanent display on the first floor of Shalom Tower, a stone’s throw from the corner Herzl and Rothschild Streets, the site of the first house of that settlement.

For such a comparatively short lifetime, Tel Aviv’s history is a rich and eventful one, with many significant developments the result of these migration milestones, one of which, perhaps most significantly, has given the city its most iconic look; Bauhaus. It was as a result of the fifth Aliyah, around the 1930s, that many German-Jewish artists and architects entered the city, providing the biggest concentration of the prevailing architectural thought at the time in one place. 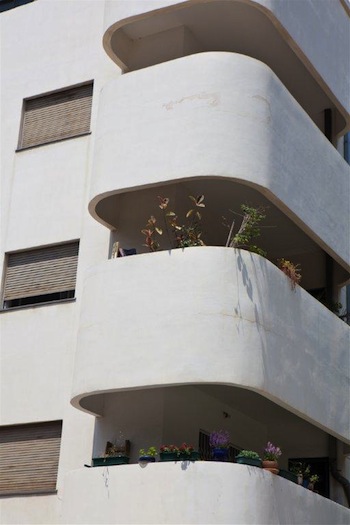 As a result, some 4,000 Bauhaus buildings exist throughout the city, characteristic in their three-storeys, right angles and rounded balconies and brilliant white, giving the city its name; the White City.

Tel Aviv’s other name, by contrast, is ‘the city that never sleeps’, and that it doesn’t. Unlike New York’s 24-hour hum based on a concentrated population buzzing like drones, Tel Aviv’s is all about its night life. And what a night life. From experimental music in basement dives to sophisticated cocktails in ballroom-sized bars, Tel Aviv’s social scene rivals any New York, London or Paris could offer. Moods are dictated by neighbourhoods, as you’d imagine, but in the main the attitude is a thrilling, passionate and carefree embracing of life, epitomised at 4am on the stagger back to the Dan as an Hassidic party bus tub-thumped its catchy clarinet tunes down Rothschild Boulevard. I did what any self-respecting, settled 30-something would do; I boarded the roof with my new best friends and danced.

And what of Ali Karavan, you ask? What of this mythical meze mecca? As we wandered the side streets and back alleys of Jaffa, I put this to Iggy, our guide, and asked after this fabled shangri-la, known to serve the best damn pureed chickpeas in the city. It was, I was disappointed to learn, not on our tour, though he did point it out to me as we passed it. My protestations for not stopping remained stilled, however, for I had eaten hummus in the port and on the seafront, I’d eaten it by the old ‘station’ and in Tel Aviv’s trendiest district. And there is a simple answer when it comes to where to get the best hummus in Tel Aviv – everywhere.

Larry flew easyJet to Tel Aviv from London Gatwick, the carrier’s newest route to the city. Services also operate from Luton, Manchester, Rome Fiumicino, Geneva, Basel-Mulhouse and Berlin. easyJet’s flights to Tel Aviv from Gatwick are available from £87.74 one way including taxes. For more information and to book flights, visit the website.

For more information on Tel Aviv, its sights, attractions, nightlife and events – though not necessarily advice on where to get the best hummus – visit www.thinkisrael.com.

On Easter Sunday, Larry gets spiritual as he heads for one of the most iconic cities in the world, Jerusalem…