In the second part of our celebration of Swiss wine, Larry witnesses the show to beat all shows, a little event that takes place every 20-odd years in a small town on the shores of Lake Geneva…

Seven years in the planning, at a cost of €100m, the main event of the Fête des Vignerons (literally, ‘Winegrowers’ Festival’) is a two-and-a-half hour show staged in a purpose-built 20,000 capacity stadium squeezed into the market square of the small town of Vevey on the north shore of Lake Geneva.

The festival is as rare as, well, Swiss wine itself. To say it occurs once in a generation is not overstating it. No more than five are allowed to take place in a century. And we’re on the 12th. That means it’s been running for over 200 years. That’s almost older than America. In the history of Swiss wine, however, it’s a mere seedling. Wine has been grown in the Lavaux region on the hillsides of the Lake Geneva since the 11thcentury when Cistercian monks, as monks do, filled their time between prayer sittings concocting (and perfecting) various iterations of home brew. In the case of the Lavaux, these hillsides at the time were covered in dense pine forest, which they cleared, then terraced, and planted vines. 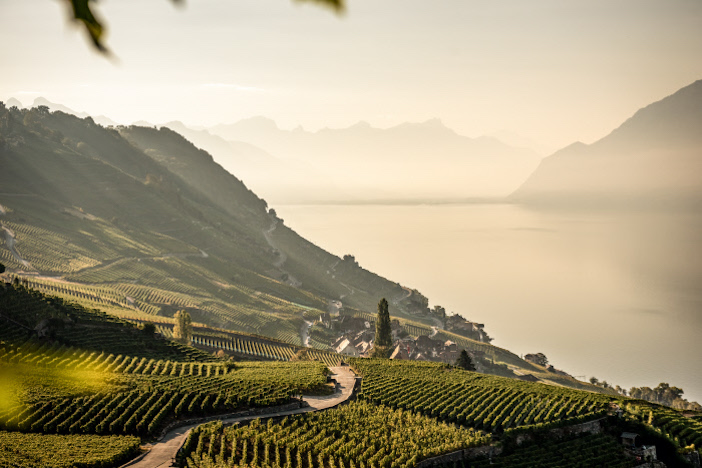 As challenging an environment as it was, it proved a more than apposite terroir for winemaking, with some 800 hectares of the region now covered in vineyards and terraces – about 10,000 of them – and seemingly squeezed into every available arable space; the vines grow on near-vertical hillsides, form wedges between tightly-packed houses, and sit next to bus stops and alongside garage forecourts. Given its history, that many of the vintners have been cultivating the same plots for generations, and that little has changed over the centuries, it’s little wonder the region has been granted world cultural status by UNESCO. And for something this special, it’s little wonder, too, that there’s a massive event to celebrate it every twenty years.

The Fête’s origins stem from the Confrerie des Vignerons (a sort of AGM of winemakers) in the mid-17th century, that would close with a parade through the town and a banquet in the main square. As it evolved, with the scale and cost increasing each year – not to mention breaks to accommodate the occasional political upheaval – its frequency dissipated to three, then six years, until, in 1797, it was decided to host a public celebration, with a singular main event, and the first Fête was held. 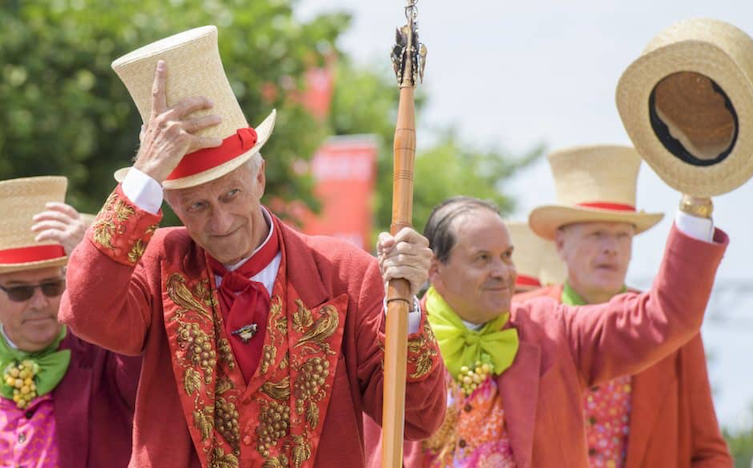 Over the years, this has evolved into a show of sorts, principally telling the year in the life of the winegrower. This year, the narrative hook is that of a young girl, Julie, being told of this by her grandfather, with a smattering of patriotic parallels and life lessons thrown in for good measure. The story unfolds through 21 scenes, or tableaux, each representing key stages in the process, and given an Alice in Wonderland spin through Julie’s imagination. There is no real equivalent anywhere, but think West End show on the scale of the Olympic opening ceremony and you get somewhere near.

The Olympic comparison is no understatement either. The 2019 show has been orchestrated by Daniele Finzi Pasca, he of two Olympic opening ceremonies to his name already. And, needless to say, the staging is nothing short of spectacular. Some 6000 participants (none professional, but the citizens of Vevey), each dressed in elaborate costume, make this as epic as a David Lean film. Added to that, the scale of the production design, including moveable stadium sections and the world’s largest LED floor – it’s worth noting all the night shows were sold out – and you can see why this isn’t staged that often. 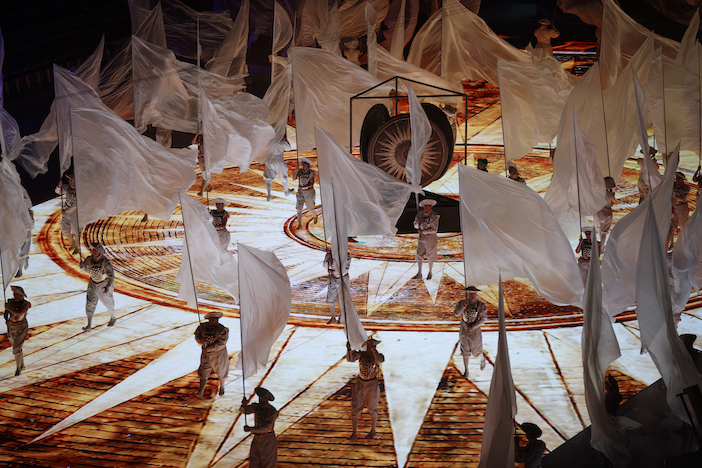 From the outset, there’s an incredible sense of spectacle. It opens with hundreds of starlings and insects (humans, obviously, in fine costume) pouring into the area to circulate among the vines during harvest time; there are terrific set pieces around the changing seasons, the significance of rain, sun and the relationship with the lake, and hair-raising displays with tracassets (the vineyard machines). There are, too, more curious routines; one involved sets of dancing playing cards representing, presumably, the chance and luck required in good winemaking; and another involving fishing – winemakers’ chosen pastime for relaxing, evidently – at the lake, which featured a large paper hat ‘boat’ and several giant pike (think The Lion King with fish).

And it wouldn’t be a national event without several specifically Swiss references, various regimental marches and processions of canton banners. It culminates in the moving Hymn to the Earth, with everyone – and a few cows – taking to the arena as choirs and alp horn fanfares, at each side of the stadium, echo each other like a chorus bouncing off the mountains. 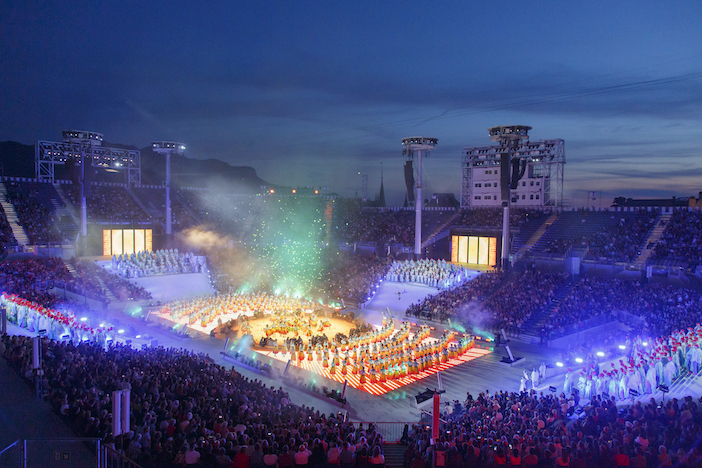 Outside the show, the small town of Vevey is taken over, with food tents lining the lakeshore and huge timber pop-ups offering wine tastings, displays on viniculture and other suitably-themed offerings. It’s a national event, too, with each day of the 26-day event dedicated to a particular canton – it’s not just Lavaux which produces good wine – and, being summer, it runs over the Swiss National Day of 1stAugust, marked by a death-defying air display over the lake.

The Fête des Vignerons is emblematic as to how seriously the Swiss take their wine. They know how good it is, too, famously keeping it for themselves, and only export 1% – one percent! Going through Duty Free in Geneva airport I saw a choice (or lack of) of a mere six bottles, all seemingly reasonably priced, until you realise it’s the equivalent of a discounted bottle for a fiver in Tesco. But, you may well ask, ‘if Swiss wine this good, and I can’t get hold of it, how do I get to taste it?’

Well, that’s easy. You go to Switzerland. It’ll be simpler than waiting for the next Fête, certainly.

For more about the Fête des Vignerons, visit www.fetedesvignerons.ch.

For more information on Switzerland and to plan your visit, go to www.MySwitzerland.com or call the Switzerland Travel Centre on the International freephone 00800 100 200 30.