Trending
You are at:Home»The Explorer»Travel»The Haute Route, Part III: A 10-Hour Ski (And Then Some)
By Philip Cottam on December 30, 2022 Travel

In the final part of our festive season feature, Philip Cottam and team conclude their tour of one of the Alps’ most challenging ski-hikes, the notorious Haute Route, and exhaustion starts to take its toll…

We made good time to the Montfort Hut where we had a wonderful view back towards the Mont Blanc massif. We then headed up to the Col de Chaux followed by the Col de Momin and the first major objective of the day – the summit of Rosablanche. We had now climbed nearly 3,700 feet since leaving the shelter of the lift station at Les Ruinettes and had seen nobody. The only traces after we had left the ski slopes below the Montfort Hut were the remains of one or two old ski tracks on Rosablanche. By now the sun was well and truly up and the temperature unseasonably warm.

Descending from Rosablanche was a bit tricky as we worked our way down the summit ridge to the easier ground at the Col de Severeu some 700 feet below.  Once onto the Glacier des Écoulaies we had a fabulous ski in deep snow racing each other down to the Lac des Dix. The next stage, traversing the west bank of the lake, looks a doddle on the map because the height difference to the Pas du Chat at the far end of the lake is less than 300 feet. In practice, it is more tiring than it looks because of the relentless up and down caused by the ripple-like nature of the ridges descending from the mountain massif above. It is also exposed to avalanches so we ensured we were well spaced out. That said, the really hard work only starts at the Pas du Chat at the end of the lake where the 1800 foot climb up to the Dix Hut begins. 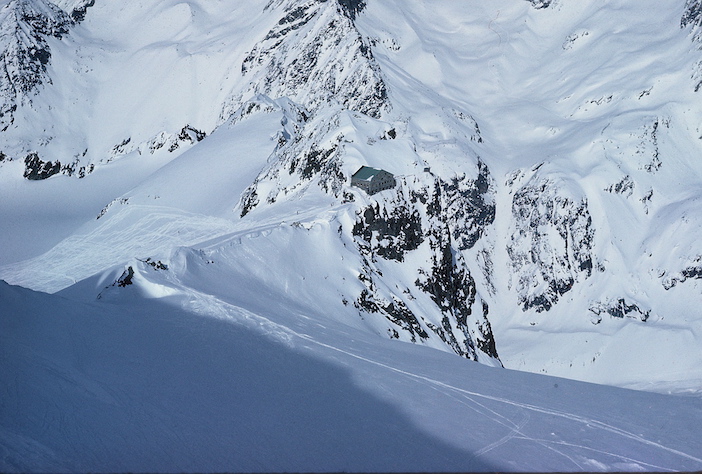 The last lap to the Vignettes Hut

By now we had been skiing for almost ten hours and were beginning to tire so we stopped for a quick brew up. Re-energised we attacked the slopes leading up to the hut in the fading light. We arrived to find a noisy Saturday night crowd well past their first beer. When they realised we had come from Verbier and did not have a guide we found ourselves being treated to drinks most of the evening. It was a great way to round off a demanding but enjoyable mountain day during which, until our arrival at the hut, we had not had to share the mountains with anybody else.

We allowed ourselves the luxury of a lie-in the next morning as a reward for the exertions of the previous day. I was banking on not having to break trail as some of the Saturday night crowd were also intending to climb the Pigne d’Arolla and traverse to the Vignettes Hut. After a hearty breakfast – eating our way through our rations had the added benefit of reducing the weight of our rucksacks – we set off after the early starters but not before we had taken in the setting of the hut. Perched on a rise it looks directly at the dramatic triangular north face of Mont Blanc de Cheilon.

We made rapid progress and caught up with most of the parties in front as they paused for a rest on the level ground just below where the north-east shoulder of La Serpentine meets the west shoulder of the north face of the Pigne d’Arolla. We did not stop but headed up the steep ground of the shoulder at which point disaster struck. Chris suddenly fell over. I half expected him to disappear down the ever-steepening slope. Luckily, he did not tumble and only slipped down a few feet. However, when I got to him, I found him weeping with pain. He had become snow blind. It was as though he had pins and needles in his eyes. The immediate action needed was to bandage his eyes to protect them from the sunlight. The only cure is to stay in a darkened room for a few days until the eyes cease to be light sensitive.  It turned out that, despite being an experienced skier, he had not bothered to wear his sunglasses the previous day. It was the basic mistake of a novice. The rest of us had not noticed as we had always been well spaced out against the risk of avalanche. 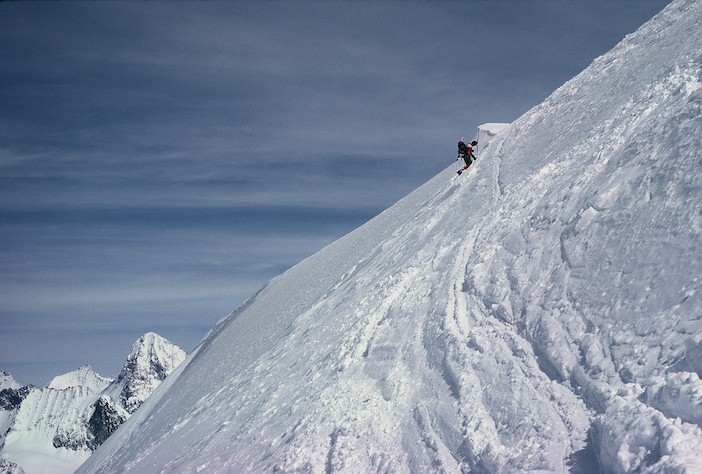 Chris righting himself after his fall

Given where we were the only choice was to continue up to the summit. The descent to the Vignettes Hut was far shorter and far safer than trying to reverse off the steep ground we were on and retreat to the Dix Hut with someone who could not see. Having bandaged his eyes I got Chris to continue skiing uphill with as few changes of direction as possible until we got onto the gentler slope that leads to the summit of the Pigne d’Arolla. What should have been an enjoyable ski down the easy slopes leading to the Vignettes Hut now became a slow awkward descent shepherding Chris as he had to do it blind.

There was no way Chris could continue the Route or even get himself down to the valley, let alone back to our base in Chamonix without help. He would have to be helicoptered off the mountain. We were insured so this was not a problem. However, one of us would have to go with him. We drew straws and Phil lost leaving Zak and I to complete the last two days to Saas Fee on our own.

From the Vignettes to Zermatt is 25 kilometres or so, and can take over 8 hours depending on the conditions. It usually provides the most arduous day on the Haute Route. It also contains some of the most stunning scenery on the whole trip (main picture). Zak and I made an early start, well before the helicopter arrived to collect Chris and Phil, as we were determined to get to Zermatt for lunch. With headtorches on we skied across the Mont Collon glacier in darkness to the first of the three cols we had to cross before the long descent into Zermatt. 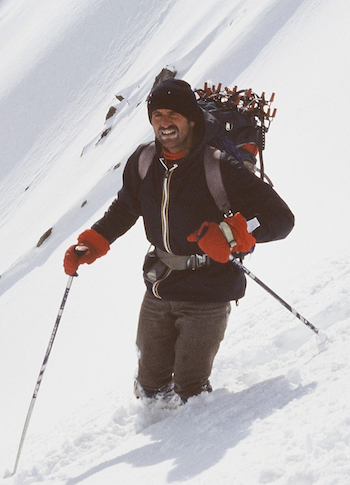 Zak starting to descend from a col in deep snow

As we climbed the slope leading to the Col de L’Eveque just below Mont Collon the sun rose slowly over the east horizon. We did not bother to remove our skins for the descent onto the Haute Glacier d’Arolla. Any time lost with them still attached was far less than the time needed to take them off and then replace them. A long traverse on the glacier below brought us to the start of the steep ascent to the Col du Mont Brule. In icy conditions we would have had to take off our skis and put crampons on to climb the slope. Luckily, because there was so much snow, we were able to ski all the way to the top. There only remained the climb up to the Col de Valpelline whose ascent, though longer, was at least less steep.

It had been a morning of hard work with some 3,000 feet of ascent but as we reached the crest of the col, we knew it was worth all the effort. The view was sensational. Just beyond the ice-covered Dent d’Herens there was the Matterhorn in all its glory; across the Zmutt Glacier sat the dense mass of the Dent Blanche followed by the long ridges of the Ober Gabelhorn and the elegant summit of the Weisshorn. Further away still was the knife-edge ridge linking the Taschorn to the Dom.  What awaited us was a fantastic 15 kilometres of downhill skiing.  The 6,000 feet of descent into Zermatt took us over the Stockji, Tiefenmatten and Zmutt glaciers and then down the prepared pistes one joins near Stafel. With clear blue skies navigating the glaciers was straightforward and the descent to Zermatt a joyous ski that makes it such a fitting climax to the Haute Route.

We arrived at the old Bahnhof Restaurant in time for a wonderful lunch.  We then booked ourselves into the into the bunk-house style accommodation available in the nearby Bahnhof Hotel. This hotel is a special place. It has been run by the Biner family ever since it was first established in 1902 and has provided a haven for climbers and skiers ever since. I am glad to report it continues to do so today. 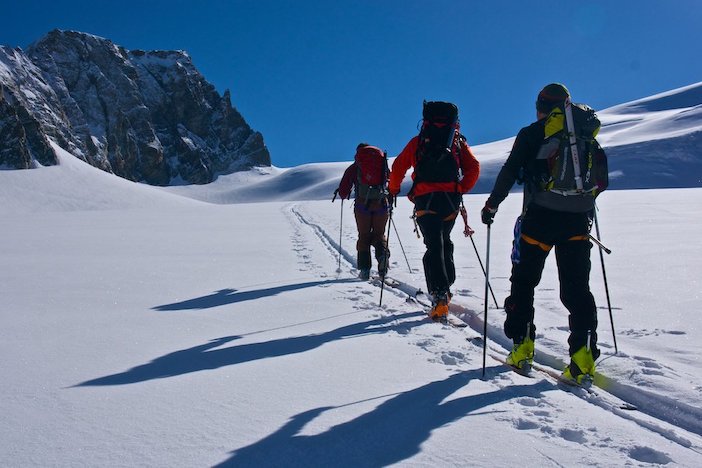 We made another early start the next morning taking the train to the Gornergrat before skiing up to the summit of the Stockhorn. From there we had a fabulous downhill run onto the huge Findel glacier over a thousand feet below before starting the long and increasingly steep climb up to the Adler Pass. It was another wonderful sunny day, so we paused for a picnic before climbing the snow ridge that leads easily to the summit of the Strahlhorn. Once back at the pass we started the relaxing ski down the Allalin glacier until we reached the short sharp ascent to the Britannia Hut. We had decided to spend our last night there to celebrate what had been a wonderful adventure despite the unnecessary disappointment of Chris’s snow blindness. The following morning, we traversed across to the Egginerjoch in thick cloud from where we then descended to Saas Fee.

As Zak and I headed back to Chamonix to re-join Phil and Chris my only sadness was that Phil had missed the last two days of the Route. He put that right a year later when he returned to repeat the whole route. As for the Haute Route itself, it is far more crowded than when we did it, longer ago than I care to remember, but it remains a great skiing adventure and one that should never be underestimated. Ski heil!