To the northwest of Florence, in the province of Prato, a majestic tree-lined avenue bridges two bucolic valleys that tumble beneath the leaves of its evergreen cypress trees. This avenue connects the mediaeval village of Artimino, and impressive Villa Ferdinanda, one-time Medici hunting lodge – built in 1596. Each end of the road commands a distinctly stately presence, in size, structure and uniquely prominent positioning.

In more recent times, both Villa and village have become dominated by what is known as Tenuta Artimino – one time stables to the magnificent hunting lodge, at the original behest of Grand Duke Ferdinand Medici I, now turned luxury hotel and collection of residences. Since the spring of 2022, it is now under Melia hotel group ownership. Upon arrival into the village, over other hump-back bridges, and atop a zigzag of country roads, visitors are greeted by red shuttered buildings, so typical of inland Tuscany, and the omni-present village campanile, or clock tower. 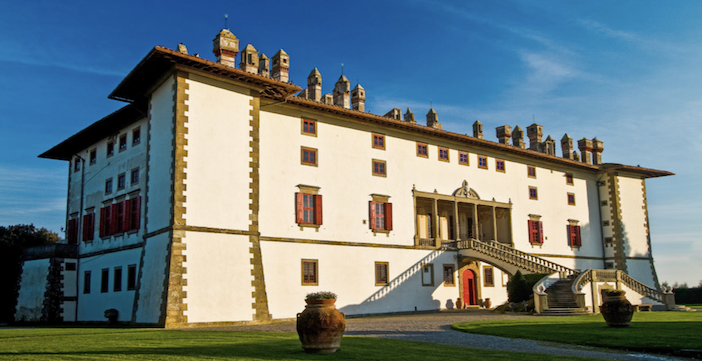 In its modern guise, the Tenuta’s stunning series of accommodations offer a window onto life as a Medici, and their highly successful lifestyle. From the ‘100 chimneys’ that sit atop the villa, mirrored on the Tenuta’s own terracotta corrugated roof, scenes of fireside chatter can be imagined during the cold months of Tuscany’s winter. These fireplaces remain a feature in each of the Tenuta’s plush bedrooms – convent like in their structure from the outside – ochre tiled walkways beneath high-arched ceilings, yet deeply decadent behind closed doors. Rooms here offer enormous plump beds, beautifully rich country house style décor and brand-new bathrooms replete with ‘Comfort Zone’ toiletries. Life here is quietly sumptuous, just as the Medici family would have commanded themselves.

If decadence continues as a signature, then a hotel must-do activity is to visit the spa – located in the village, and taking over a building that was once the tenuta’s wine shop. Now something of an alternative vinous haven, the wellness centre and spa offers unique wine-themed therapies – a total oenophile’s dream, nodding to the village being located within the DOCG of Carmignano wine country. Treatments include the sublime Wine Therapy for the ultimate relaxatory massage followed by wine bath complete with glass of Cabernet while you bathe. The must and grape seeds are said to provide significant anti-ageing and antioxidant benefits to the body through the absorption of their polypheynols. Guests can then take advantage of the spa circuit – using the multiple sensory stations, finishing up in the enormous plunge pool (not yet open at time of visiting). 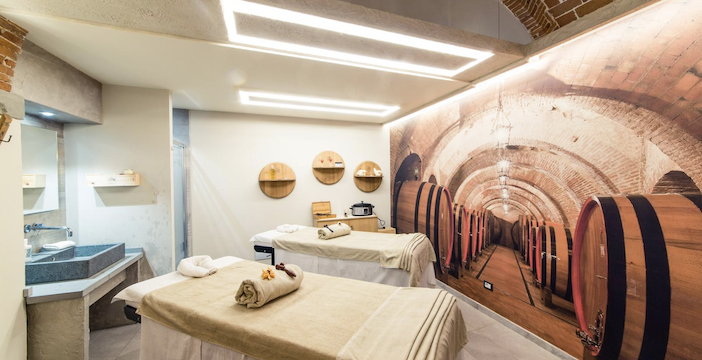 The Tenuta’s offerings expand beyond the realms of king-fit bedrooms, out into the stunning grounds, boasting a perfectly formed swimming pool which overlooks distant views of Florence, framed by outdoor bar. This backs on to the separately housed restaurant, where, under red awnings that match the tiny red cacti plants on the tables, the Biagio Pignatta will verse you in simple Italian cuisine, including classic Tuscan dishes such as amuse bouches of bacalao fritters to help whet the appetite.

The restaurant’s head chef here is native to Piedmont’s Cuneo – but she has also spent time in the Turks and Caicos islands, enhancing her overall culinary experience, which at this particular hotel spans an impressive fifteen years. Tonight’s culinary soundtrack, while perusing the simple and mostly estate-driven wine list includes Amy Winehouse, nodding perhaps to how the Medici family once heavily patronized The Arts. From the wine bar or at the restaurant, sipping on a locally grown glass here adds significant sparkle to this region’s jaw-dropping sunsets – nature’s evening arias graze the top of the cipressi, float through neatly-sewn olive groves, and settle amongst the hotel’s 65ha of vines, planted with local and international grape varieties. 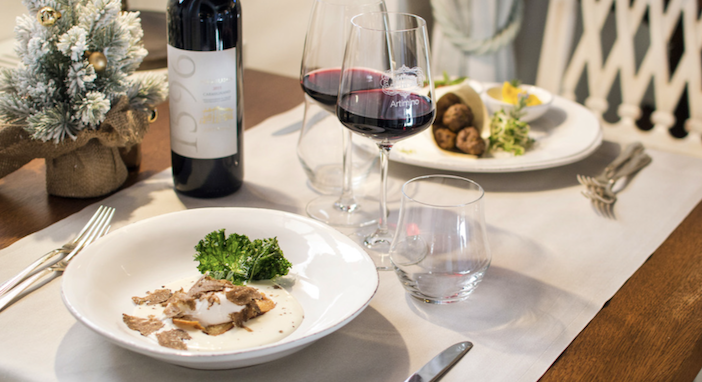 There are only 12 wine producers in Carmignano DOCG, one of the oldest and smallest in Italy and possibly even the world. While the estate and villa nod to similar visual characteristics of other better known regions of Tuscany, perhaps Bolgheri, or Chianti, it could be argued that here, the Medici were the first real creators of what is now acknowledged as a ‘super Tuscan’ wine – the ‘breakthrough’, break all the rules wines and using international grape varieties that showed the world something altogether different. In 1716, Cosimo III created a series of rules about grape blends, ageing methods and vineyards within this appellation. He also started to ship these wines to the rest of Europe – a progressive action during a time when it wasn’t yet the done thing to let a wine age in bottle.

The original wines from the Villa were of a Cabernet Sauvignon and Merlot blend. The Cabernet was originally imported by Caterina of the Medici when she married King Henry II of France. Villa Ferdinanda is now owned by the Milanese Olmo family, known for having made their name through cycling and today the estate continues to make 11 different labels, including Artumes-ancient Latin for Artemino, and ‘il Ruspo’ – the ‘stolen wine’ rosé, monikered as such for being originally made from grapes the farmers ‘forgot’ to deliver overnight, syphoning off the already fermenting juice for themselves, before taking the rest of the grapes to the winery for processing the next day. 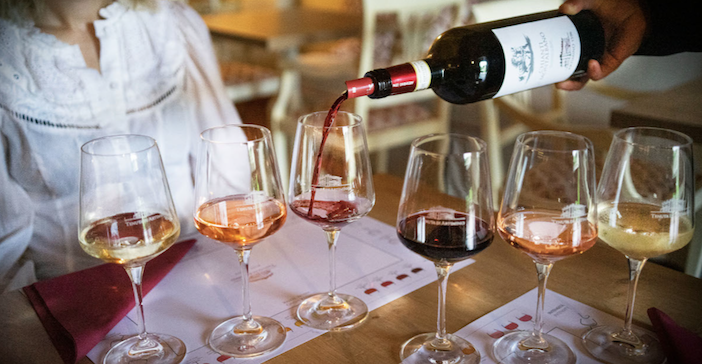 The rest of the wines in the series are still made from Cabernet Sauvignon, Merlot and Sangiovese, as well as a small proportion of Syrah as so found in the Grumello – a wine attaining Italy’s prestigious ‘3 Bicchieri’ award, synonymous with Italian wine excellence, and served by the glass in the restaurant here. The estate also produces a black vin santo – the only one made within the DOCG.

For all manner of Medici yearnings, and their lasting legacy on Italy, Tenuta Artimino is just a short trip along the River Arno for a quiet, heavenly place to be.

Hotel Tenuta di Artimino is part of the Melia collection. For more information, including details of offers and other properties, please visit www.melia.com.