Those taken with the colour and ebullience of Martin Scorsese’s 2002 epic, “Gangs of New York”, will experience similar frissons at the Royal Academy’s spring exhibition, “George Bellows: Modern American Life”. Whilst New York might not be Bellows’ only subject, its vast presence dominates the early paintings and unlike Scorsese’s picture which tends towards cliché and melodrama in the latter parts, Bellows’ canvases deliver their seamy promise in spades. “I arose surrounded by Methodists and Republicans… My mother wished me to be a Bishop, my Father planned for me to become President of a bank…” Bellows wrote. 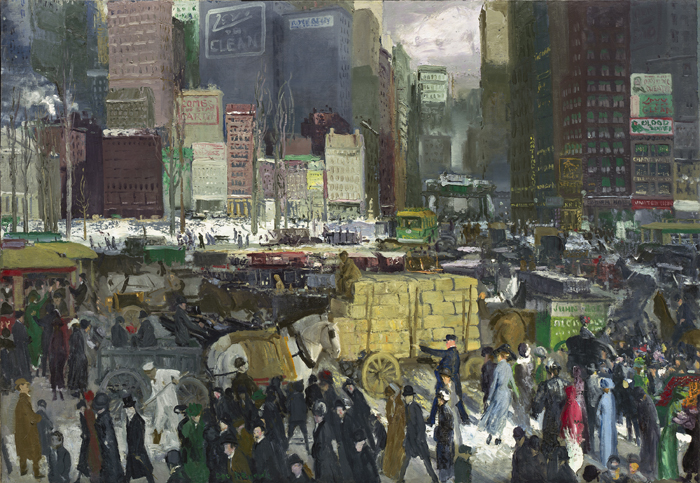 Indeed his beginnings do not appear to be the stuff of such a passionate and fearless chronicler of modern life. He was from the conservative mid-western state of Ohio. His mother, Anna Wilhelmina Smith, was the daughter of a whaling captain and his parents were comparatively elderly when they had him. At Ohio State University he excelled at sports and in fact was so skilled at baseball that, under encouragement, considered turning professional. But Bellows had a talent for art also. He drew for the student yearbook and even accepted assignments as a commercial illustrator whilst at college. Like all great artists, something was driving him beyond the reason and wishes of his peers and family. In 1904 he dropped out of university before he graduated and like many before and since, headed for the seething metropolis of New York City.

“By sheer luck I found myself in my first art school under Robert Henri, never having heard of him before… I had every equipment except all the essentials. My brains were as innocent as a college could make them. My life begins at this point. The rest is legend.”

It is difficult to underestimate the profound effect Robert Henri had on his young and willing pupil. He has been widely recognised as one of the most influential teachers of his era. What would have happened if the green stripling Bellows had not fallen under his tutelage? Would his art and personality have failed to develop as they did? Would he have remained a jobbing commercial illustrator as was his original intention? It is one of the many serendipities of history that they did meet, however. In fact, all the compass points seemed to converge, all the planets aligned for this point in Bellows’ life – that he arrived in the teeming, turbulent city of New York at that particular time, that he fell in with Henri and befriended other young artists who, like him, were willing to throw themselves into the maelstrom. 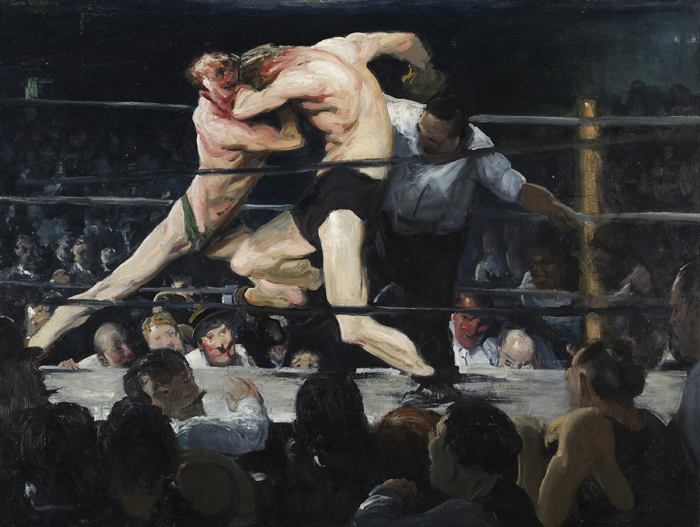 And what did Henri teach that so appealed to his young neophytes? That the anodyne scenes so favoured by the National Academy of Design should be replaced by contemporary subjects that challenged and unsettled. Drawing on the traditions of the seventeenth century Dutch painter Frans Hals, the Spanish master Francisco de Goya and the nineteenth century American artists Winslow Homer and Thomas Eakins, all of whose traces can be seen in Bellows’ work, Henri directed his students out into the world to confront and capture what they saw.

Bellows responded with characteristic conviction, journeying deep into the yawning canyons of the East Side with its tottering tenements and ragged inhabitants. As with his earlier forays as an illustrator and his later development as a skilled lithographer, Bellows chose a variety of media to lay down his images. “Election Night, Times Square” (1906), “Dogs, Early Morning (Hungry Dogs)” (1907), “Tin Can Battle, San Juan Hill, New York” (1907) and “Street Fight (recto)” (1907), are all rendered in heavy monochrome using a changing selection of charcoal, lithographic crayon, conté crayon, brush and ink, graphite and pastel. The shadows are thick, the figures stooped and twisted and the scenarios full of drunken vigour and dark humour. They nod back to the prints and caricatures of Hogarth and Daumier and point forwards to the graphics and comics of the twentieth century.

Beside these are big unabashed oils featuring the same denizens. In “Frankie, the Organ Boy” (1907), “Little Girl in White (Queenie Burnett)” (1907) and “Nude Girl, Miss Leslie Hall” (1909), pallid, impoverished creatures who would find themselves as massed groundlings in paintings at best, are here given Whistler-style treatment in large full-scale canvases. These societal nobodies are elevated to the stature of somebodies by their bold depiction. If their gazes are full of shy reserve and diffidence, then the paintings themselves seem to speak up on their behalf, “Look! Here I am, and I am worth something!” 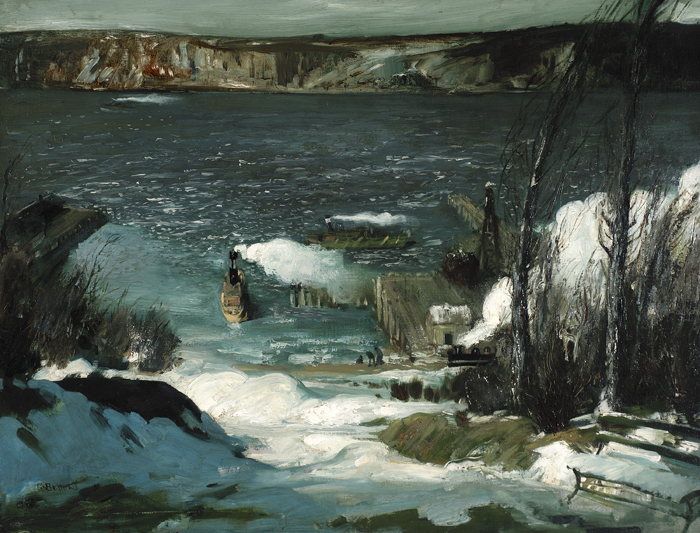 The paintings continue to confront our notions of what are fit subjects for portraiture, particularly in relation to the time they were created. Nowhere is this more evident than in “Forty Two Kids” (1907). Here a horde of skinny urchins are gathered on a ruptured wharf by the polluted waters of the Hudson. Stark naked, the sun blazing off their jaundiced flesh, they variously cavort, play and otherwise disport themselves like miniature Calibans. One figure is even caught in mid and clumsy dive, his buttocks high in the air and the soles of his feet bent overhead. The painting was said to have shocked its audience when it was first exhibited. With its rude vigour and honesty, it still does.

Bellows is perhaps best known for his boxing canvases. The earlier ones were done when the sport was still illegal and bouts were organised in underground clubs. Big canvases like “Stag at Sharkey’s” (1909) are mesmerizing. The paint is slapped on in quick explosive strokes like eruptions of sweat. The two men tear into each other with primal force. Their red faces bleed into each other like chumps of meat, prefiguring the anguished portraits of Francis Bacon. But Bellows gives equal space and weight to the spectators, without whom there would be no fight. They are ranged around the bottom of the ring, a series of heads and faces, smudged and smeared, lynx-eyed, grimacing, leering in their blood lust, the closest ones in the evening dress of gentlemen. And we, the twenty first century audience, are caught in the same reflex, the spectators of spectators of brutality. Bellows confronts us with the dark desires coursing through our unchanging natures. 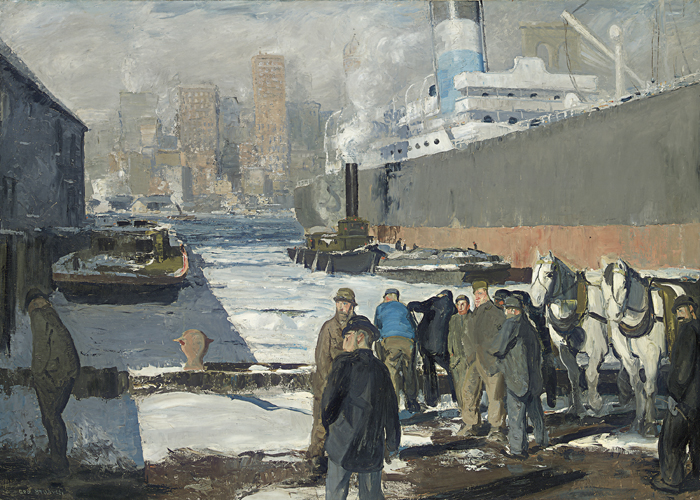 But Bellows was also interested in landscape and mans’ relationship to his environment. In “Pennsylvania Excavation” (1907) and “Pennsylvania Station Excavation” (1909), he is reduced in scale to ants crawling over the rubble and filthy snow of the site of the new railroad terminus which gaped from the centre of the city like an excised tumour. In fact, in all the ‘working’ New York pictures, man is seen as spindly and overawed by the confluence of his own babel-like constructions and nature’s older workings. In many, such as “Rain on the River” (1908) and “The Bridge, Blackwell’s Island” (1909), the river is a brooding presence, lined by blank warehouses and traversed by gulping steamers.

Bellows was a fine and understated chronicler of the everyday. In “Men of the Docks” (1912), a group of longshore men stand disconsolately by in the hope of work, dwarfed by a vast steamer to the right and smaller moored vessels in the centre and left. In “Snow Dumpers” (1911), a group of helmeted horsemen and their draft horses perform the banal but vital task of clearing the city streets of snow and heaving it into the river. All these elements converge in the massive canvas titled simply “New York”. A teeming cross-section of Manhattan, set slightly above the stalled traffic on the thoroughfare, it depicts the bustle of pedestrians in their tall hats and Edwardian dresses and the laden shapes of horse drawn wagons – a long gone Victorian snapshot. In the top half of the picture though, skyscrapers fight for primacy like trees in a jungle, their sides hung with advertising hoardings – an image of contemporary America most will be familiar with. Bellows’ art, like his life, straddled two eras. 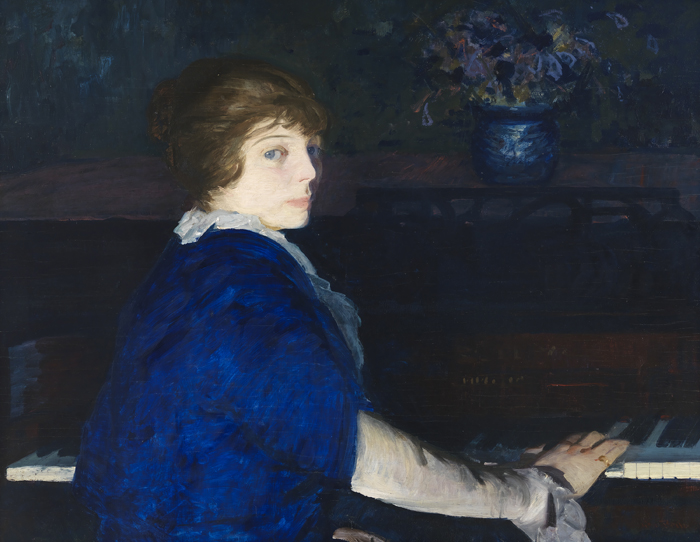 In 1910 Bellows married his art school sweetheart Emma Story. Over the following few years she would give birth to two children, both girls. As well as the New York townhouse he purchased with the help of his father, he also inherited a rural house in Woodstock where he would frequently escape to paint. His subject matter expanded to include scenes of family life (he painted many portraits of his wife and daughters), high society scenes of tennis and polo and the well heeled promenading in New York parks and hundred of simple but intense seascapes, many done at Monhegan Island. Those critics who have written off Bellows as selling out after his early success are guilty of profoundly misreading him. Bellows saw no antithesis between domesticity and modernity, between the rural and the urban, between painting plein-air and from working from memory in the studio (or in the case of his shocking World War One Canvases, form his imagination and written reports). For him everything was fit subject matter for the canvas which is why his contemporaries and art historians have found it so difficult to place him.

Bellows died in 1925 at the age of forty two from peritonitis after suffering from a ruptured appendix. His passionate commitment to art in all its forms had seen him experiment with realist, impressionist, expressionist and latterly, symbolic and mannerist forms. Whilst he drew inspiration from the old masters like Goya, Velasquez and El Greco, he was an intensely modern painter, taking on the baton from painters like Manet and Renoir. Although he was always strictly representational, there was something in his fearless experimentation that was kindred to Picasso. Unlike the Spaniard who worked into his nineties, we can only wonder at what might have been had Bellows’ life and work not been cut so brutally short.

“Try everything that can be done. Try it in every possible way. Be deliberate. Be spontaneous. Be thoughtful and painstaking. Be abandoned and impulsive. Learn your own possibilities… There is nothing I do not want to know that has to do with life or art.”