Trending
You are at:Home»The Culturist»Film»Inside Llewyn Davis
By Harry Chapman on March 1, 2014 Film

No one does losers quite like the Coens. From the pride of fools in their riveting debut Blood Simple to Nicolas Cage’s hapless goofball Hi McDunnough in Raising Arizona through to the grand daddy of them all, Jeff Lebowski’s slothful dopehead in The Big Lebowski, their visions of idiocy and nincompoopery have rained down on audiences with delightful regularity over the years. With the arrival of their latest offering, the folk comedy Inside Llewyn Davis, the twerps would appear to be very much present and correct. And yet this is not quite the case. The titular hero, the Welsh-Italian Woodie Guthrie wannabe is no comic grotesque. But most significantly of all is that the boy has talent. 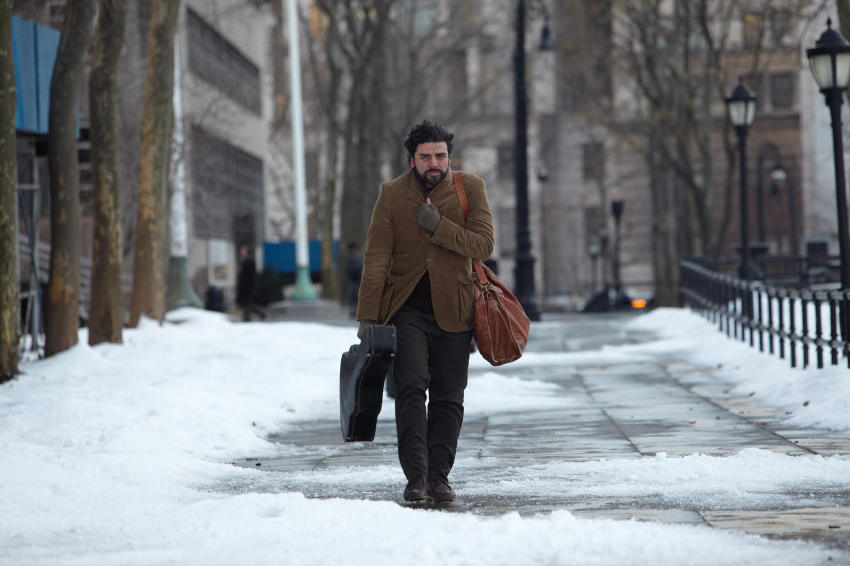 The film opens in the Gaslight Café in New York’s Greenwich Village where the curly headed Davis is perched on a floodlit stage singing a doleful folk song to a club full of respectful hipsters. He sings the song through, from beginning to end, the camera cutting languidly from performer to audience. It is an interesting and bold way to start the movie because without establishment of character or music it rests entirely on the performance, and the drama implicit in performing, to grab our attention. And it does. I could feel the initial restlessness of a newly seated audience filter away until we were all held, as quietly engrossed as the fictional audience in the fictional club. When the song ended I was struck by a paradoxical thought – that was a good song but I wasn’t sure I entirely enjoyed it. In fact this sets up Llewyn Davis’s central dilemma and one of the underlying themes of the film – the fact that he can sing, and sing well, but will anyone ever want to buy any of his records? The age-old struggle of the artist – remaining true to yourself whilst somehow earning a living doing it.

After the song Davis goes into the alley at the back of the club and is beaten up by a shadowy stranger wearing a suit and talking in a Western drawl. So begins a typical Coen Brothers film where the errant hero meanders through a hostile world where indignities and humiliations are piled upon him. Except this isn’t actually the beginning of the story but the end, the culmination of all his mental and emotional torments with a physical hammering. It isn’t quite the contemporary Book of Job depicted in A Serious Man but poor luckless Davis is sure made to suffer before he pops out the other side. 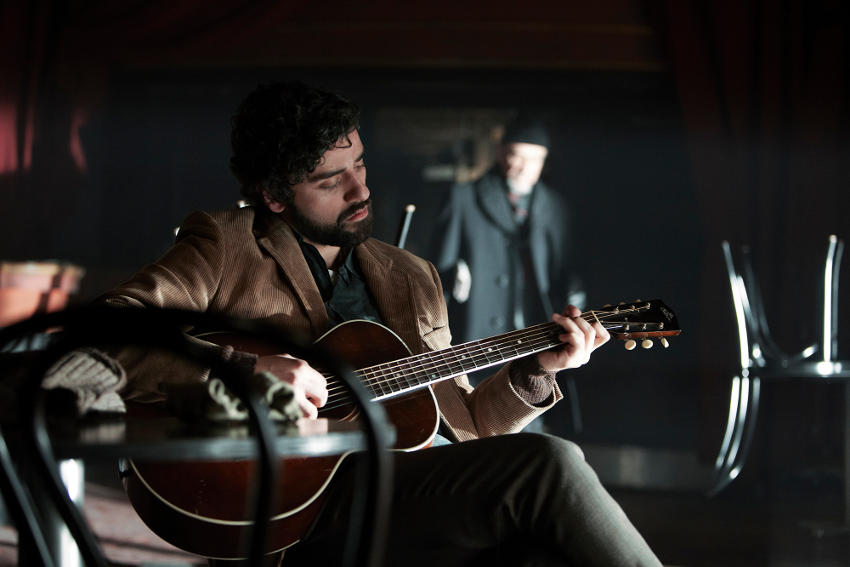 The story, as we are to discover at the end when things turn full circle, in fact begins a week earlier when Davis, staying in the affluent apartment of his Upper West Side friends, the Gorfeins, accidentally locks himself out together with their beloved cat. Reluctantly taking the animal with him he sets out on an odyssey of New York and beyond. The year is 1961 and whilst it might be the dawn of a new era for some, it is the middle of winter and Davis doesn’t even possess a winter coat let alone a home. He is the quintessential struggling artist, a guitar on his back, dossing on friends’ couches until he outstays his welcome.

He next calls on Jean, married to his friend Jim, and both, like him, are aspiring singers and musicians. Jean is played by the subtle and magnificently versatile Carey Mulligan, here all quick wit and terseness. Davis needs a place to stay. She is angry and hands him a piece of paper which reads, ‘I am pregnant’. Apparently Davis may be the father and she wants an abortion. One more thing to knock him sideways.

As often with the Coens the plot is not really the thing, more an armature to hang a collection of offbeat episodes and amusing eccentrics. Once or twice I thought I had missed something. I couldn’t fathom why, for instance, Davis ends up in a car bound for Chicago with the noxious jazz musician Roland Turner (John Goodman) and the James Dean lookalike beat poet Jonny Five (Garrett Hedlund) – until he finally gets there and auditions for the gimlet-eyed music supremo Bud Grossman (F. Murray Abraham). But if the plot is slight and wondering then the story isn’t. What is it going to take for this talented young man to give up his dreams and become ‘respectable’? By the end we think we know. After all the crud and failure Llewyn Davis is ready to cash in his chips and return to the merchant service like his father before him. But even then he manages to fumble. Having paid the $148 in back dues – down to his very last dime – he discovers that his sister has disposed of his seaman’s license on his previous orders. Just as the fates convened to make his passage to artist an onerous one, they sure as hell aren’t going to let him return without a struggle. 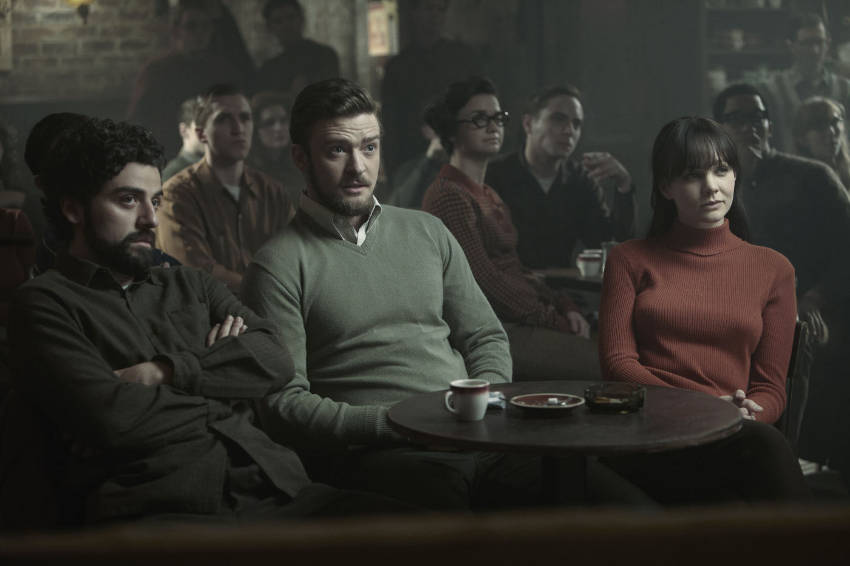 Although Inside Llewyn Davis might sound downbeat, the domestic tragedy is everywhere punctured by the Coens lip smacking schadenfreude. Perhaps because Davis takes him so seriously, his suffering is funny. But amongst the humour-lined gloom there are scenes which purely delight. The one with Davis, Jim (Justin Timberlake sending himself up as an Aran sweater wearing square) and Al Cody (Adam Driver) harmonising a novelty song called ‘Please Mr Kennedy’ is spellbindingly funny. The Coens have also topped themselves in the colourfulness of their casting. As well as regulars such as Goodman and familiar faces such as Mulligan and F. Murray Abraham, there is a whole roster of supporting players – the Gorfeins, the Gorfeins’ friends, Davis’s agent and his wife – whose physiognomies are wholly original and wonderfully comic; faces that would never ever come out of central casting but which gratefully exist in abundance in the Coens’ world.

Throughout it all stumbles the mournful-visaged Llewyn Davis, ably played by the Guatemalan actor and singer Oscar Isaac. Much has been made of the character’s unsympathetic veneer. I think this is missing the point. One gets to understand him which I think is all an audience really needs. The Coens perfectly capture his arrogance mixed with insecurity; he is forever slagging off his peers. The cat (there are actually two) becomes a sort of surrogate child for him and it is a poignant moment when he abandons it in a car with the comatose Goodman, only to injure it further down the line whilst driving another car (perhaps hinting at the child he never knew he had and the other one he has been instructed to get rid of in the abortion.) In a rare visit to his father who is mouldering away in a home in a semi-catatonic state, he plays a valedictory song. It reminded me of a similar scene in the Bob Rafelson masterpiece Five Easy Pieces with the young Jack Nicholson playing a very different sort of musician. In both films the father gives no response whatsoever. For Davis even family has abandoned him to his talent. 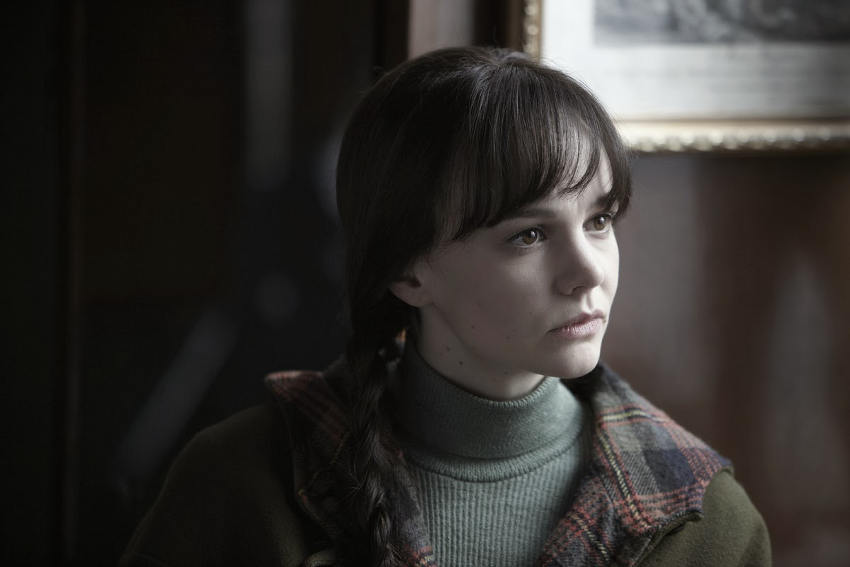 Don’t go to see Inside Llewyn Davis with the expectation that you’ll get an exploration of the Greenwich Village music scene of the early sixties (as my wife, a muso, did.) In this it will disappoint although the reconstruction of the period through design and cinematography is beautiful. But if you want to see the Coens on top form, in playful mode, but reaching into say something serious (about the creative condition) in a way they often shy away from, then this film is a joy. It’s like being in the company of a good friend, a bit wayward and a fine raconteur. I never knew quite where it was headed but didn’t want it to end.