I’ve gone down the rabbit hole and there’s no telling when, or if, I’ll come out. In front of me is a dish that smells of freshly cut grass. Truffles and toadstools float in a thick pond of green, their tops covered with what looks like dried basil. An excitable, bespectacled man magics himself to our table. Rubbing his hands with glee, he explains in a faint whisper that the creation is inspired by memories of dawn walks down a dewy northern Italian mountainside, and admits he may have gone too far with the chlorophyll. We’re given a glass to pair with it filled with transparent liquid. The sommelier mutters something about ginseng. It smells cloud-like and burns in the mouth. Welcome to Osteria Francescana, the three Michelin-starred Modena restaurant of Italian culinary wizard Massimo Bottura, voted the fifth best restaurant in the world at this year’s San Pellegrino World’s 50 Best Restaurants awards. 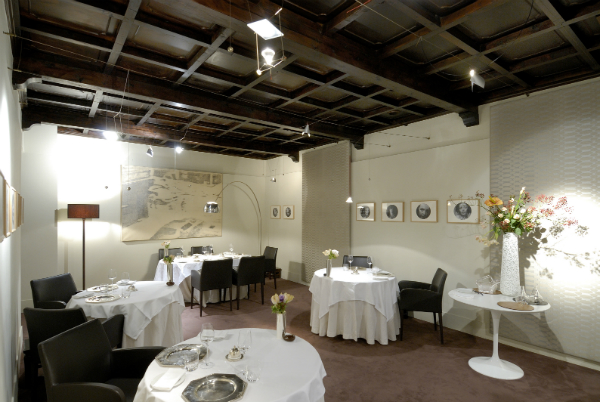 Since opening in 1995, Osteria Francescana won its first star in 2002, second in 2006, and third last November – the first restaurant in Emilia-Romagna to achieve such an accolade. The softly-spoken Bottura, who trained under both Alain Ducasse and Ferran Adrià, looks like an amalgam of the two, with Ducasse’s playful smile and Adrià’s darting eyes, reflecting the flashes of brilliance that shoot from his brain like stars. Few chefs balance the demands of tradition and modernity as adroitly as Bottura. Deconstruction is a recurring theme in his progressive cuisine that aims to shake up conventions and stick a pin in the balloon we call the past. Hidden down a cobbled side street off Modena’s main square, the 11-table, 28-seater restaurant is so tiny, it feels like you’re in Bottura’s front room, having been invited to a surreal dinner party. I half expect Dalí to waltz in. Walls are adorned with weeping women. Edith Piaf in varying states of despair is not the most appetite-inducing of artwork, but it’s suitably provocative. The hushed sophistication of the dining room, painted 50 shades of grey, focuses the mind into a state of pious contemplation. But don’t let the name fool you; though Bottura’s dishes are inspired and informed by Italian produce, with Emilia-Romagna his faithful muse, they’re light years away from the rusticity of an osteria. 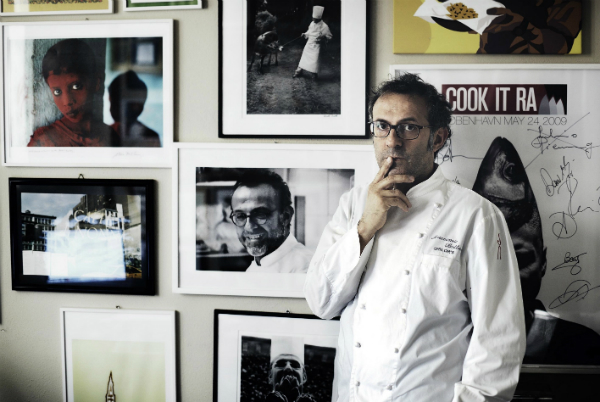 Revisiting and reinventing the flavours of his childhood in a Heston-like manner, Bottura’s creations are inspired by music, art, film and literature. Each dish tells a story and takes its recipient on a journey. “Inspiration comes to me in a flash when I’m listening to music or watching a film – all my thinking comes together in the shape of a plate,” says the ludic, Wonka-like Bottura, whose creative exuberance oozes into his food. OF offers three tasting menus: Traditional (€100), Classic (€140), and the more daring Sensations (€180), dreamt up from the experimental kitchen. We opt for the Classic menu, with a few Sensations thrown in for good measure. The first dish is of such audacity, it firmly thrusts the gauntlet on the table: a palate-cleansing granita of almond, capers and coffee inspired by the flavours of Sicily. Starting with dessert is weird enough, but a dessert with capers and salt crystals? Mind-bending madness only Bottura could pull off. The vivifying amuse bouche is matched with what our swashbuckling, shaven-headed sommelier Beppe Palmieri describes as “the Antichrist” of big Sicilian whites: a lychee and apricot infused organic wine made from the Zibibbo grape, more commonly found in grappa. An avid trumpet blower for organic and biodynamic wines, Palmieri has strong opinions on food and wine matching: “I’m not looking for a wedding. Mistakes in the mouth are interesting,” he insists.

Up next is a gleaming fillet of Po River eel, oven cooked in one of Modena’s key ingredients: aged balsamic vinegar. Its toffee-coloured sheen recalls the sweet miso glaze found furnishing black cod everywhere from Nobu to Novikov. Atop the eel is burnt onion ash and either side, artful swooshes of lime green saba apple and canary-yellow polenta. The sharp acidity of the apple cuts cleanly through the sweet balsamic glaze in a pleasant union of flavour and texture. Bypassing the bollito misto inspired by the New York skyline, we move swiftly on to one of the most curious dishes I’ve tried in recent years: Tribute to Thelonious Monk, the American jazz pianist whose compositions were full of dissonant harmonies and angular melodic twists.

Composed of a hunk of swan-white Alaska black cod with a soot black roof fashioned from vegetable ash swimming in a pool of squid ink broth so opaque it looks like glittering crude oil, lurking beneath are oyster leaves, seaweed and ginger. Abstractly evoking the black and white keys of Monk’s piano, and, to my mind, the matt and gloss finish of an artist’s paintbrush, the monochrome dish is menacing. Save for liquorice, evolution has taught us not to trust black food, but the cod is tender and the oil slick tastier than it looks, though my palate has trouble reassuring my eyes. While exploring its inky depths, Bottura pops out of the kitchen to explain that the creation is also inspired by Argentine short-story writer José Luis Borges’ desire for a monochrome existence, and Mario Schifano’s black-and-white Postmodernist paintings. For Bottura, art and food are as inseparable as Christ and the church.

I am dining with Anselmo Pellini, Modena’s top Lambrusco producer, and his charming wife Beatrice. With the arrival of each dish, Pellini grows increasingly concerned that Bottura has got our order mixed up and mistaken the Sensations menu for the Classic menu. Then it arrives: Five Ages, Textures and Temperatures of Parmigiano Reggiano. “Now this is a classic,” Pellini exclaims, delighted and relieved. An ethereal composition of Parmesan sauce, mousse, foam, crisp and air aged between 18 and 50 months and served at varying temperatures, from stone cold to womb warm, while the mousse has a displeasing, tofu-like, spongy texture, the 40-month-old crisp is umami rich, and the cheesy sauce, a liquid lullaby. To match, Palmieri does the decent thing and pours one of Anselmo’s top raspberry pink sparklers, which glints jewel-like in the light. Then, to our amazement, he uncorks a bottle of aged balsamic vinegar and pours a few drops into each glass to “turn it into a Kir Royale.” Anselmo’s jaw has to be retrieved from the carpet – the alchemist has taken things one step too far. 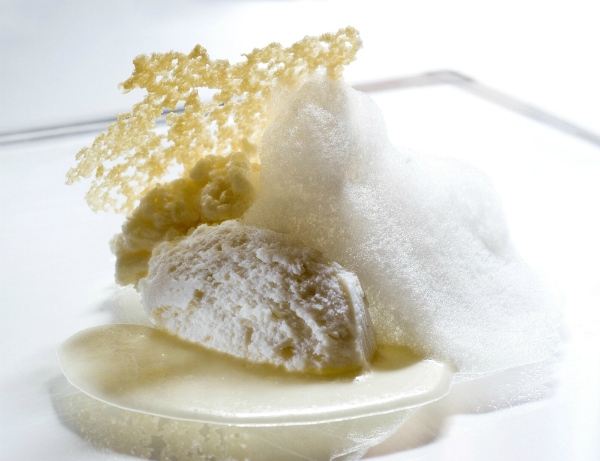 Grateful to have the next course to focus on: fleshy folds of five-year-old Culatello ham (meaning ‘little bottom’ but in reality made from the large muscle in the rear leg of the pig). Soft, supple and sweet, the meat is robust and redolent of the musty caves where it was aged. Keen to regain our favour, Palmieri delves deep into his 1,200-bin, treasure trove of a cellar for a suitably spectacular wine to assuage the bitter memory of the balsamic incident. He returns with an amber bottle of 1971 Château Gilette Sauternes. Fragrant with notes of almond, quince, apricot and nectarine, it proves a heavenly match for the Culatello – Gilette: the best a ham can get. Bottura has one last trick up his sleeve before we’re permitted to wake from the dream. In a final Wonka-like trompe l’oeil flourish, our waiter brings us each a tiny, hazelnut-coated lolly that looks like a mini Feast. Chomping into it, I’m rewarded with rich, creamy foie gras injected with aged balsamic vinegar. Having started with dessert, how sweet and fitting to end on a savoury note.