Trending
You are at:Home»The Lifestyle»The Idler»Musings»A Comedian in Tennessee, Part I
By Angus Dunican on August 2, 2014 Musings

As the Edinburgh Festival gets underway, Angus Dunican reflects on jobs comedians take out of season. One wet spring in Blighty he takes flight to America, to a Southern institution and home of a certain Glastonbury headliner…

Pigeon Forge, Tennessee. An hour’s drive from Knoxville. Every third pick-up truck flies a confederate flag or has one pinned to the back window, behind the gun rack. However, it’s a largely toothless display. Since Tennessee was the last state to join the confederacy (largely shamed into it by virtue of Virginia being up for a fight, despite being further north) and the first state to sheepishly rejoin the Union at the end of the civil war, I can’t help but think of the Tennesseans as anything other than mere whistlers of Dixie.

What am I doing here? Well I’ve come to perform. Not stand-up comedy you understand, as half my gags are about Clapham Junction. I, and some others, have been hired to come to Dollywood (yes that Dollywood), dressed from head to toe in foam and latex and frolic for the delight of families on their way to rides and shows on the park. In a way it’s perfect, it’s like exploring another world from within the comforting anonymity of a space suit.  However, this is no ordinary gig, this is as far afield as I have ever trotted in my career as a performer and its effects on everything – from my manner to my appetite – have left me feeling as though I’ve been dismantled, sent through the mail and rebuilt somewhere else. I’ve been here a couple of days now and I initially took this feeling to be the befuddling effects of jet-lag but it has since matured into an unsettling sense of the uncanny. 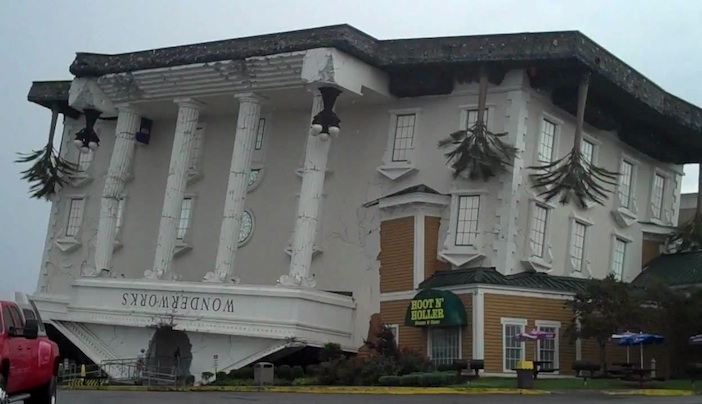 Take one evening, for example, I was sat by the window of my (actually rather nice) hotel room, attempting to enjoy the sunset behind the smokey mountains with a beer.  I say ‘attempting’ because obstructing my view was the Amazing Upside-Down House – a mock neo-classical colonial mansion that has, via some whacky happenstance, found itself to be upside down. Judging by the cars in the lot it seemed to be doing good business. I couldn’t tell if that’s because of the absurdism of the idea or because, upside down or not, these folks’ll pay good money to walk around in big fancy house.

Further down the way is Hatfield & McCoy’s Family Feast Barn, advertising a sort of hillbilly dinner show. It seemed to be in competition with the similarly themed ‘Lumberjack Feud’ dinner show half a mile down the road. However, between that, the half scale imitation Titanic and the ersatz skyscraper (complete with King Kong), I’d say there’s money enough from passers-by to go round.

For passers-by they all are. There’s an old joke about America (specifically California, but never mind) that goes ‘when you get there, there’s no THERE there’.  It is a well worn phrase of my father’s, a retired traffic engineer, who is habitually suspicious of all things transatlantic that don’t involve three walls, a live studio audience and some jews, but the truism holds water here. This is, by far and a way, the most American bit of America I’ve ever been to. Astonishing natural beauty (always distant, unreachable and bear-riddled) but intersected by the crass, the sublimely charming, the almost wantonly perfunctory and the organically devoid.  Pedestrians along the roadside are not just unusual, they are openly mocked by passing motorists – dismissed as obvious crackpots. 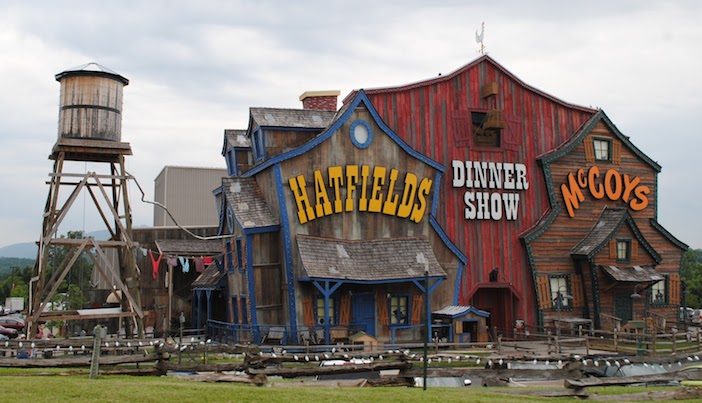 Meanwhile, elsewhere, such cheerfulness. When in conversation with someone magically devoid of their car, one finds so high a grade of friendliness that it would make one suspicious of alien mind control in any normal (read European) circumstance. In conversation with the locals, I have found it interesting that many of them continue to think of England as being the home of good manners. I would be further interested in transplanting one of these polite, curious and deeply Christian creatures to the Godless chasm of home-time at London bridge to see if the illusion holds. Mind you, the indifference of strangers is endemic of any big city – even and/or especially American ones – whereas here there is no such thing as a pointless conversation. No comment is too banal to go un-chuckled at with a good natured ‘It sure is!’ or similar thrown into the bargain.

I have to say, I quite like it or, at the very least, it doesn’t feel too unfamiliar. This is a world I’ve been in touch with my whole life. I wish it was from knowing country music and southern foibles but it’s more like what you glean from watching Koyanisqatsi or listening to Laurie Anderson. It’s the America that my father spent all those years subtlety instructing me about. In contrast to our damp little island, it is the epitome of all that is hegemonically harmonious. Harmonious and transitory. ‘We’ll get along just fine as long as you’ll be getting along in good time’.

No, the source of the uncanny is not really the people but the place itself. Here, nothing is ‘real’.  It’s as though Dollywood (the park itself, some few miles up the way) has in some way gotten into the soil, burrowing and permeating like some mad-weed. It has infected the surrounding area with the same unreality, the same sense of the place being a slightly diminished copy of itself. It’s easy to see what bothers so American writers about their home; why they feel so alone, so disconnected from reality. Fresh supplies of it are few and far between.  Your best hope for something authentic is in the eye of the storm – within the park.

The park is big but not overwhelmingly so. It is divided (in roughly equal measure) between rides, eateries, performance spaces and traditional arts and crafts.  This last category is an example of what a fiercely canny business woman Dolly is.  It demonstrates that she knows people can only take so much fibreglass and sugar before a desire for the wholesome or the tangible takes hold.  For this reason, in craftsmen’s valley, you can sit and watch men – whose beards have beards of their own – making wooden carts and rocking chairs or pouring molten iron into sand-moulds or supernaturally talented glass blowers forming objects of bizarre beauty from an oven labelled ‘Glory Hole’, without apparent irony.