In the second part of his stint gigging in Dollywood, Angus Dunican discovers both an unusual means of relaxation and an alternative to a morning cup of coffee, and meets the matriarch herself…

Between shows, I’m doing my best to take advantage of the facilities at the park – to, quite literally, expand my horizons. I’ve been here a week or so now and it’s proved hard thus far but I’m confident that I’ll get it this time.  I’m fairly convinced that the trick is to stare at the emerging hills instead of the seat in front.  That way, the feeling I’m going to have in precisely 6.3 seconds, will be somehow pleasant. It’ll just be a beautiful and misty landscape, viewed from a height of 210 feet, that just suddenly tilts by 90 degrees. Landscapes can do that on the ground as well, that is if your prepared to stand around with your head cocked to the side, on top of a high hill for a while.  I can deal with that I think, rather than staring dead ahead and getting ‘The Feeling’.  It’s an odd feeling, as though both my stomach and my genitals have suddenly found themselves in my skull and are jostling to look out of my eyes at the view; like teenage boys with binoculars in a tree across the street from Roedean. Frankly, I wish my tummy and my nuts could take an eye each, that way I wouldn’t have to look out of them myself. 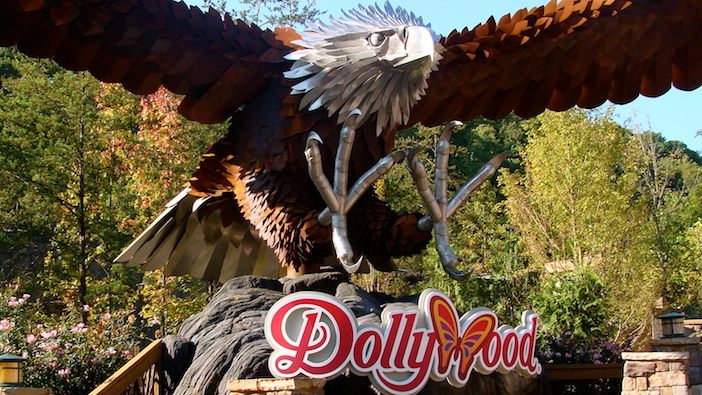 This is my third time riding the ‘Wild Eagle’.  It is all over in about a minute and half. When I stagger down to the photo booth, to see what face I made as I confronted the abyss, I discover that I (once again) failed to keep my eyes open. The 11 year old in the seat next to me is checking his iPhone.

Of the four people in my group that I came with, two were here last year and they assured me that – by the end of my time – I’ll be riding the first flight of the Wild Eagle each morning in place of coffee for a pick-me-up.  I have to say that I was, initially, deeply skeptical that I would ever get on another roller coaster again after the first one they took me on.  It was made of wood, creaking wood.  What’s more, during the high summer, the bees that nest in the ride emerge and it has to be closed down for hours at a time or risk production lines of families been shot through clouds of the enraged little darlings. 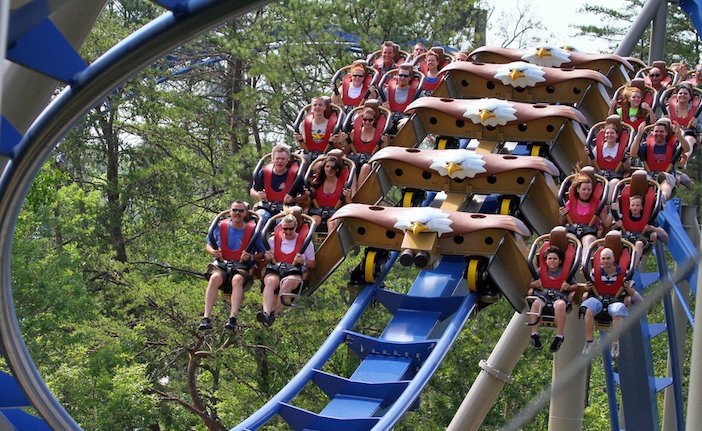 It seems to me that roller coasters fly in the face of everything that I have always been taught to be afraid of (things approaching my head at high speed, long queues, stuff that other people seem to enjoy etc.) as well as invoking terror at a few things that I really should have more faith in – most notably human engineering.  Despite all attempts at being rational, there is always a voice in my head that shouts ‘I don’t care how good a safety record pretty much all roller coasters have; do you know who made this? That’s right, PEOPLE.  I know people, they’re corner-cutting wankers!’.

Due to lack of exposure/pressure to have a go on them in my formative years, I have almost no frame of reference for theme park rides. That said,  one or two of the more hairy moments of acceleration on ‘The Thunderhead’ did put me in mind of the school-run with Dad behind the wheel. That not withstanding however, rides of this calibre are a glaring omission from my childhood for which I have always been, if I’m honest, quietly grateful. Life is harrowing enough as it is without deliberately putting oneself through recreational astronaut training. But then, round about the second time I rode ‘The Mystery Mine’ (think the mine cart chase from ‘Temple of Doom’ but physically feasible) something clicked.  These things have stories.  I’m not talking about trundling past terrible animatronic vignettes of prospectors and cowboys, I’m saying they wind you up, create suspense, relief, terror and even hilarity but they do it physically. 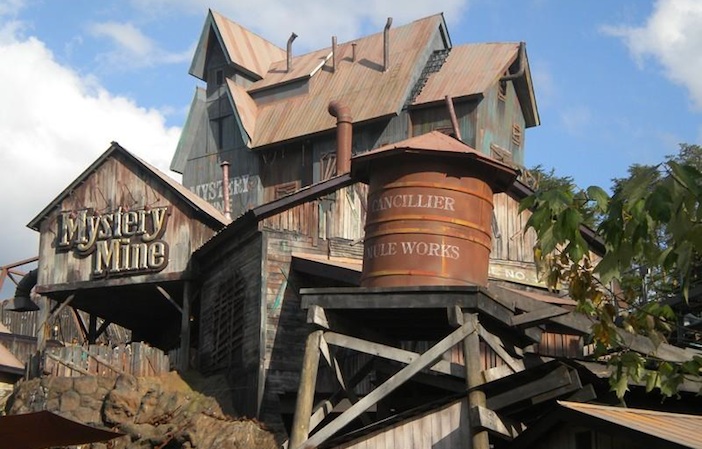 It becomes, as all things can with sufficient force, a metaphor for life. Just getting on in the first place feels like you’re amassing the courage to be born.  Once you’re strapped in, the enormity of what is about to happen starts to take hold and a blind panic descends that threatens to hungrily devour your reason. What follows is a ten second trauma-bomb of denial, anger, bargaining and finally acceptance. There is no getting off this ride now, not unless you want to cause those around you undue distress. In fact, I consider it my civic duty to stare down the oncoming insanity as best I can. As Pink Floyd said “Hanging on in quiet desperation is the English way.”

It’s odd. I feel like discovering that I enjoy world-class (read ‘astonishingly frightening’) roller coasters has caused my personality to crash. If I’m not afraid of heights and I’m suddenly OK with not having the option to quit things I’ve started – I’m not sure I know who I am anymore. Huge swathes of my ego have always been based around my being a card-carrying ‘fraidy cat. I don’t know who this guy walking around in my clothes is.

Thankfully, I haven’t had to even look like me for the majority of the meaningful connections I’ve had since I’ve been here. People seem to be having more fun talking to the costume, which is fine by me – it takes the pressure off while I work on how this coaster-fancying stranger I’ve become walks and talks. It was especially useful when the time came to meet the woman whose ‘face’ is everywhere one turns – when I had a photo-call in costume with Dolly herself. We walked out onto a strategically lit stage and our host came and stood by us, all the while smiling with her hands on her hips and squealing in hyper-real southern delight at our antics and jokes.  I was grateful for my disguise, it afforded my the opportunity to carefully look her up and down in a way that would raise eyebrows if there weren’t for the 2.5kgs of cloth, plastic and rubber covering me – probably double that if you include all the optional extras she’s carrying. 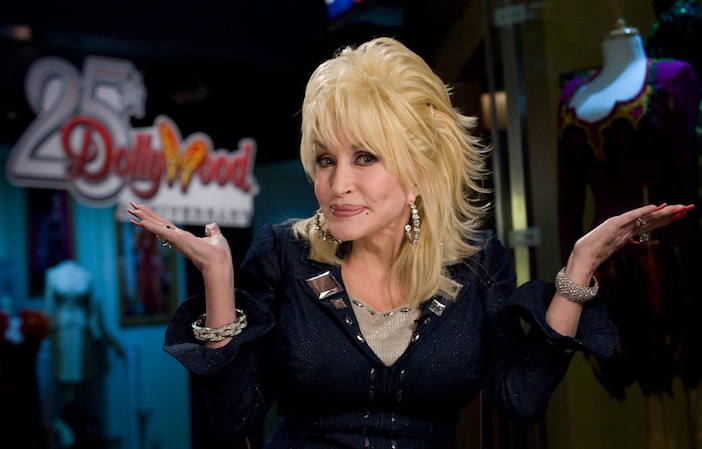 It’s bizarre to stand in front of Dolly Parton, especially after having spent time in a place like this. You’re meeting Walt Disney and Micky at the same time; you’re confronted by both the impresario and the money-making creation – fused into one unfeasible body. In fact, the physical impression is an even more jarring mixture of expectations. It’s as though a particularly bosomy Barbie got into the teleport machine from ‘The Fly’ with Rod Stewart.

I’ve been in a sort of daze ever since. That didn’t just happen did it? Well, yes, it did but then it didn’t really happen to me, it happened to my character, to my whimsical and unwieldy avatar – he’s the one who met Dolly Parton.  But then did he actually meet Dolly? The more I think about it, the more I’m not entirely convinced anyone but her inner circle has ‘met’ her for a long time, they’ve just stood in the same room as her character.

That sense of unreality again. The front. The muscle twitch of prolonged smiling. I think that might be why I’ve come to depend on a daily dose of the coasters, as the others predicted I would. When everything else starts to seem insubstantial, you have to fall back on base principles. If nothing else, gravity still exists…though Dolly herself seems determined to prove otherwise.

Angus Dunican: The Great Indoors at the Edinburgh Fringe runs from 31st July to 24th August 2014 at the Laughing Horse at The Jekyll & Hyde. Performances start at 7.45pm. For more information and to book tickets, visit the Fringe website.