From its rooftop restaurant to its subterranean speakeasy bar, the new Vintry & Mercer hotel in the City, is winning over business supremos and hip travellers alike, by capturing the City’s unique heritage through its eclectic design ethos.

Named after the merchant guilds that operated in the area to trade wine (Vintners) and silks (Mercers), the 92-bedroom hotel is hidden away in the warren of lanes that lie between Mansion House and Cannon Street. It’s not a gleaming cutting-edge affair, as you might expect in this neighbourhood, but, instead, the interiors, designed by Dexter Moren Associates, reference the destination’s rich history with a high level of detailing and tons of character, while still offering modern-day luxury. 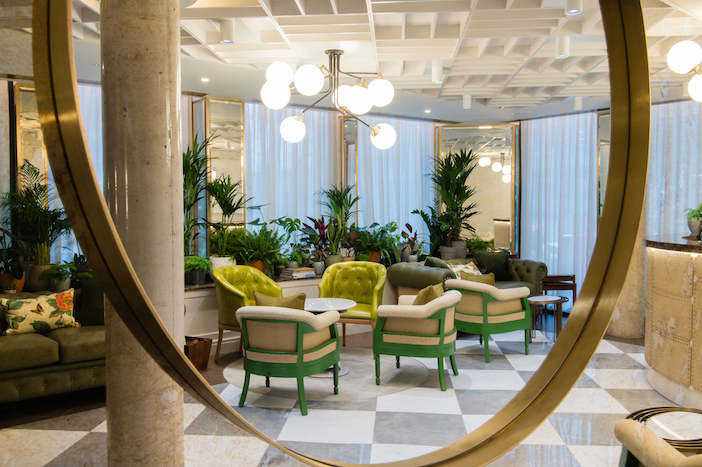 Specialist finishes in joinery – such as metal meshes to doors, leather wrapped niches and metal stud detailing – give a nod to the age-old artisans that once worked in the surrounding streets. Throughout – in the bedrooms and on the ceiling in the library, for instance – there are ‘faded’ hand drawn graphic maps, which merge the old City with the new, and are digitally printed as wallcoverings. Meanwhile, bespoke carpets reflect the fabrics manufactured in the trading period, curated artwork connects to each of the guilds, and a delicate light sculpture near the lobby pulls guests through the building into the main spaces.

Bedrooms have a plush feel – with grandiose velvet, button headboards in regal jewel colours, damask textiles and carriage-style mirrors to evoke the golden-age of train travel. While there are plenty of nods to the old, there are also plenty of modern touches, such as the reading lights, USB plugs built and room controls handily built into the beds. Bathrooms are equally sumptuous yet practical, with underfloor heating, marble vanities and anti-fog mirrors.

The flamboyant feel comes into its own across the hotel’s dining spaces. A highlight is a meal taken in the Mercer Roof Terrace, which the designers have based on a countryside orangery with floor-to-ceiling windows overlooking St. Paul’s Cathedral and the Southbank. Sage green and grey hues are juxtaposed with brass detailing and honeycomb-patterned tiling and, even on a rainy day, the restaurant is flooded with light. 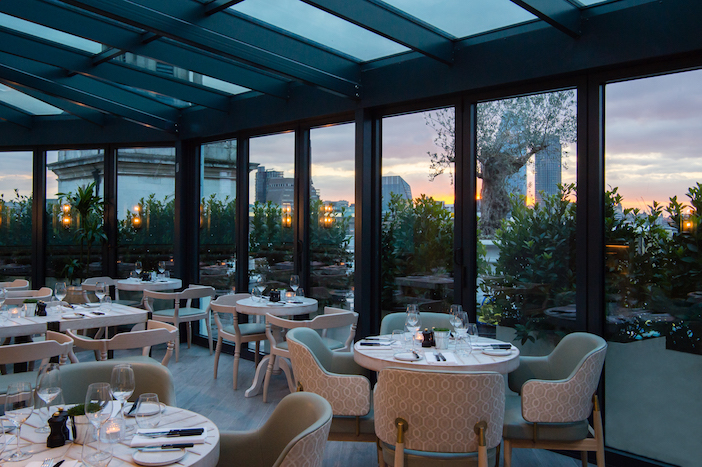 The terrace is a particularly charming place, with strings of bulb lighting hung fiesta-style and potted plants giving a Mediterranean feel. Overseen by executive chef Chris Golding, the menu focuses on the best of British cooking. Divided into ‘Land’, ‘Sea’ and ‘Earth’ – there are charcoal steaks, Scottish scallops and salt-baked kohlrabi – giving plenty of choice for everyone. Heartwarming and indulgent sides include cauliflower, blue cheese and beef rib gratin, creamed savoy cabbage and triple cooked chips. Starters are light and seasonal, such as Porthilly oysters and grilled octopus, while desserts are a modern take on classic favourites with the lemon & thyme cheesecake and chocolate mousse made with stout two of the standouts.

Equally enticing is the ground-floor Vintry Kitchen, which serves an Asian-inspired menu, as well as daily breakfast, in an industrial-styled dining room – think: geometric-tiled floors, marble-topped tables and luxurious leather banquette seating. The menu reveals Chris Golding’s past-life at at Nobu, Nahm at the Halkin and Zuma, so expect Izakaya plates of sweet miso glazed aubergine, salmon sashimi tostada or beef rib teriyaki arancini. While the steamed buns and tempura selections add up to the perfect meal: be warned, you’ll want them all. 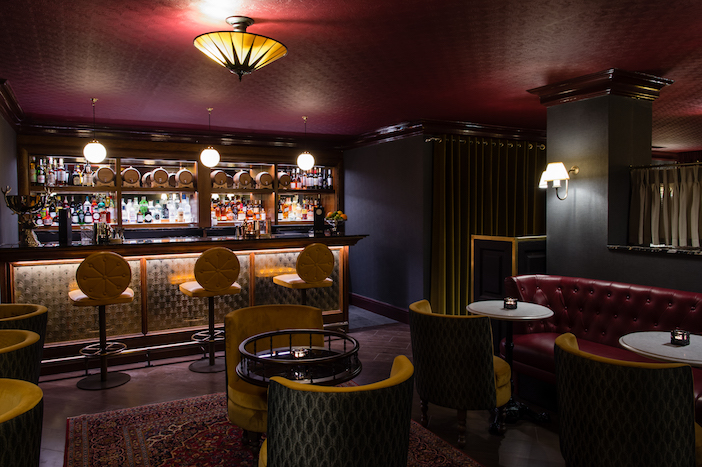 Downstairs in Do Not Disturb, the 1920s speakeasy-inspired bar, it’s a different vibe. Follow the copper-spiral staircase, lit by a trailing chandelier, and you’ll find the crimson-hued space. (You can also enter via a darkened entrance on Garlick Hill). Moody in feel, it boasts an extensive cocktail list (although the lighting is so dim, you might have to read it by your phone’s torch) and interesting light bites – such as lobster sliders and monkfish tacos. The signature cocktail – the Martina – is a sweet-sour combination of rum, grapes, lemon juice, sugar syrup and soya sauce. Claim one of the mustard velvet armchairs, trimmed with fringing like a flapper girl, and soak up the vintage detailing – Art Deco lights, a marble and brass bar and decorative claret mouldings on the walls. It’s wonderfully evocative.

The mid-week rate for a standard room is from £285 per night. For more information, including the story of the brand, and special offers, visit www.vintryandmercer.com.