Trending
You are at:Home»The Explorer»Travel»The Call of the Wild: Madikwe Game Reserve
By Victoria Haschka on February 2, 2012 Travel

It’s bucket list stuff. Definition of a bucket list: the stuff you want to do before the lights go out and the curtains close. For me, it’s the desire to spend some time with the creatures that flocked the blinds of my childhood bedroom. And not just in a zoo, a park, or a well-choreographed musical. It’s once you’ve committed to making it to Africa that another list comes to the fore. From then on it’s all about The Big Five. Elephant, leopard, African buffalo, lion, rhino. Captured in a category because of the danger they presented to hunters stalking them. 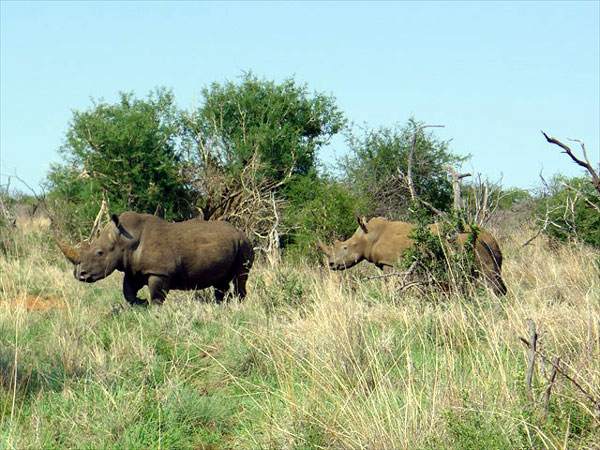 We’re staring down three days at Rhulani lodge in South Africa’s Madikwe Game Reserve, four hours drive from Johannesburg and bordering Botswana. I’m crossing fingers and hoping we’ll have time to see them all; a rare occurrence, but we might just get lucky…

Just 10 minutes after our arrival in this malaria-free zone, where the bushveld nudges the Kalahari, we’re shepherded to our first game drive. It’s a swift introduction to the level of luxury that marks Rhulani. Unlike some neighbouring lodges, our open-topped Toyota game-viewing vehicles sport canopies to shelter us from the elements. The seats are well-padded. There are blankets to shield against the wind. There are bottles of chilled water for when the sun scorches. These may seem like little things, but when you’re spending up to four hours at a time on a drive, these aspects begin to matter.

It doesn’t take long to discover the best feature of the afternoon drives. Sundowners. As the sun shrugs down towards the grass, our guide Lilyan stops the truck, extends the front grill and lays a tablecloth. Soon the prettiest pop-up bar in South Africa sits in the centre of a fatly-grassed plain. And a cold glass of Stellenbosch Chenin Blanc is just the thing to settle the nerves before we see our first herd of elephants. 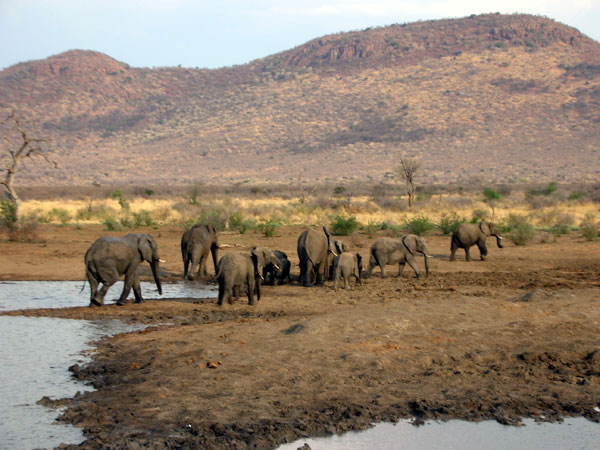 One thing I quickly catch onto: these are not the sweet specimens from Disney cartoons. Though Dumbo was bang on about one thing: it’s the mummies you worry about. Particularly when 20 of them are concerned about the distance between your truck and their babies.

There’s an even more supportive  community among the guides in this reserve. When one vehicle gets a flat tyre, another lodge sends a driver to help replace it. And while there may not be any internet at Rhulani, it turns out the guides have their own version of Twitter, by way of shortwave radio.

Each day at Rhulani starts the same. We’re woken by whatever comes first; a gentle knock at the door from the guides or the peach light that slinks through the shades. Rising before 5am, we make our way up to the lodge for coffee and rusks; less baby food and more crumbly fingers of grain-filled biscotti. 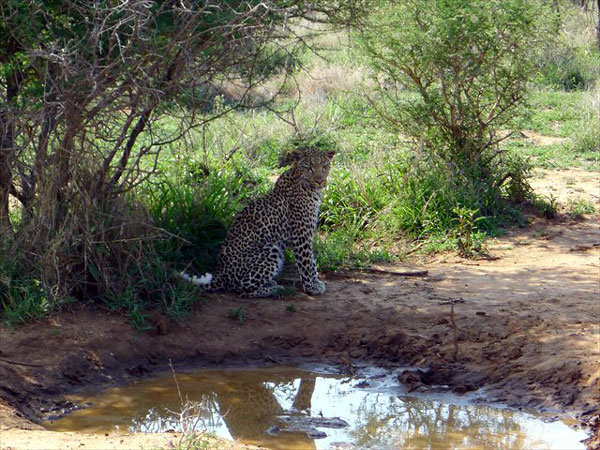 Clutched in most of our hands is a list from our rooms, a spreadsheet table of animals that might be spotted within the 150 kilometre perimeter of Madikwe. Halfway down are listed the leopards, the most elusive of the big five. Some guides can spend a whole year in the bush without seeing a single leopard.

There were already leopards in Madikwe when the land was reclaimed as a park in 1991. The rest of the game came from Operation Phoenix; one of the largest relocation exercises in the world, which brought more than 8,000 animals out of 28 species into the park.

Throughout the drives, guides from all over the park broadcast on their radios what animals are congregating where. It was this spirit of sharing that gifts us 10 full minutes in front of a leopard. He wasn’t shirking up in the trees in the scrub, he was proudly sitting beside a watering hole, posing like a prince of the bush. I wonder if it knows how lucky we all count ourselves to have seen him.

The day time hours at Rhulani bring to life the local Tswana meaning of the resort’s name, ‘relax’. Each chalet is entirely self contained with king-sized beds draped with a canopy of salmon-edged mosquito netting. Above it the roof is thatched, below the floor polished concrete and stone. In summer the midday heat can soar above 40C, but each hut is blessed with air conditioning and a plunge pool in the centre of the deck. 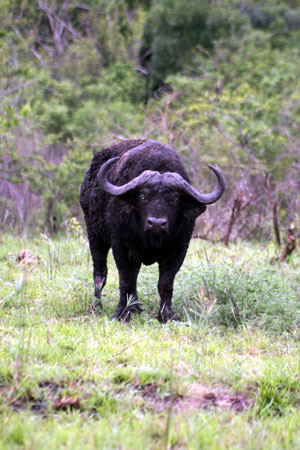 Because of the chalet’s outdoor shower (and probably the popularity of the resort with scantily dressed honeymooners), we’re guaranteed none of our neighbours can see onto our balcony, and that no staff will wander in front.

From the edge of our plunge pool we overlook the watering hole flanking the resort. During the day, dazzles of zebras and other beasts with less appealing collective nouns gather there. On our second day, while making a cup of tea, my husband excitedly calls out “buffalo!” I almost spilt the Earl Grey on the rug. But no, it’s not. It’s a family of warthogs, mother and four wee babies, trailing like brutish piglets. When we finally see a buffalo, it’s hidden in the dark of the bush, and it’s the size of a tractor.

In the quiet moments of the game drives, our attentions turn to plants, birds, and dung beetles urging marbles 10 times their size across the dirt. We discuss the roles of male and females in herds. We hash through collective nouns and we map where things fit in the food chain. It doesn’t take long to twig that what it really boils down to in the bush is who eats what. Here at Rhulani, we as apex predators are eating well.

Each night we are greeted on our arrival home with a thimble of sherry. Dinner is served by the boma (a campfire enclosure). We sit in a semicircle like councillors of a tribe honouring the flames. We eat rich food that mocks our sedentary day in the back of a vehicle and drink pinotage. As we knife into fat tenderloins of steak we chew over what we all saw that day.

Most of us agree that the highlight is meeting Ethali, the lion king of Madkiwe. We are introduced on our final night. We find him 100 metres from his brother, who sports a scar and a limp after a scuffle a few years back. Ethali weighs in at around 270 kilograms. He has a roar that makes every hair stand up on your thighs and is the best illustration of why, when they say “don’t stand up in the vehicle”, you don’t stand up in the vehicle. 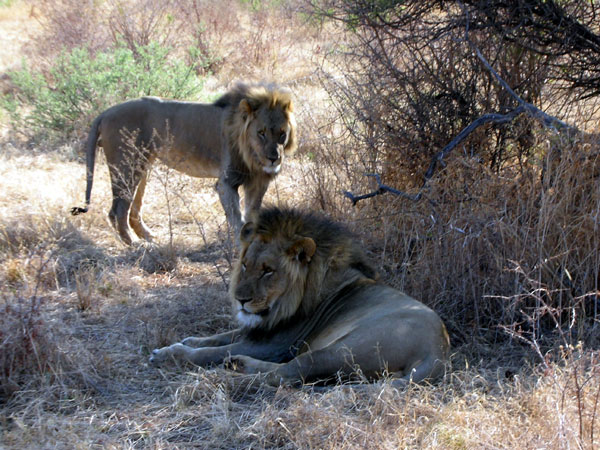 The only member of the Big Five that’s not broadcast on the guides’ radios are rhino. Our guides are reticent to share their numbers and even more reluctant to share their locations, lest anyone with a gun and a hunger for funds from the Asian market be in the area. It’s a poignant reminder that even today, not everyone in the park is stalking animals with the flash of their camera.

When we find them it’s a mother and child, nuzzling under a tree, dancing around each other in a quiet pas de deux. And so, after three days in the vehicle and by the plunge pool we realise we’ve ticked off the Big Five. We spend our night flicking through our photographs like trophies.

Our transfer back to Johannesburg is leaving early. As the bottle of pinotage drains and the fire trembles to a close we have a decision to make. We can wake for a drive that leaves in four hours, or enjoy eight hours cosseted in a canopied king bed. It’s not a difficult choice. When you’re talking bucket list, sleep doesn’t count for much.

During our last drive I should have been checking the hyaena and caracal from the list in our room. I should have been scanning the sky for more shrikes and the scrub for wild dogs. Instead I find myself scrawling in my notebook. I’m making another list, with big numbers in it. It’s a budget for how and when we’ll find our way back. That’s the thing about safari, and particularly ones as safe and luxurious as this. They don’t come cheap.

And that’s the thing about bucket list items. Once isn’t going to be enough. For who among us could decline to spend just a little more time with the lion king of Madikwe?