Trending
You are at:Home»The Culturist»Entertainment»99 Tiny Games
By Harry Lytton on July 27, 2012 Entertainment

On Saturday 28 July 2012, no less than 99 tiny games will be launched, free for anyone and everyone to play all over London. The games are designed to be ‘happened upon’ and played right then and there on the spot. Everything needed to play the game is contained within a simple vinyl poster and the surrounding environment – so players might use a nearby mosaic or pattern of bricks, a set of steps or street furniture. Passers-by can spot the game, read the rules and start playing in just moments. Three games will be available to play in each of London’s 33 boroughs. For all game locations, visit the website. 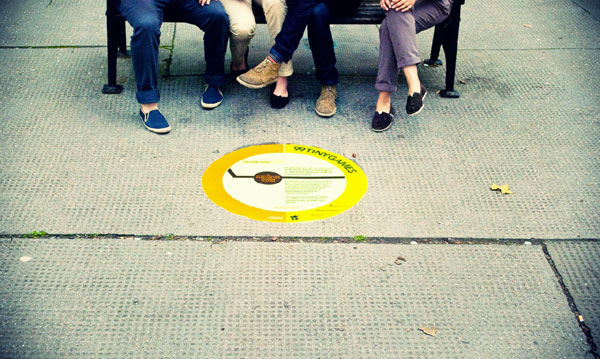 99 Tiny Games is part of the Mayor’s ‘Showtime’ festival, which will be the largest outdoor festival ever hosted in the capital. Designed to bring the magic of the London 2012 Games to every corner of the capital, Showtime will showcase the very best that national and international artists have to offer. London game design studio Hide&Seek were asked to design all of the original Tiny Games, and a team of designers has been travelling from Hounslow to Havering to source locations and create all 99 original games in response to varying public spaces, design and architecture, making this a playful experience that truly is for all Londoners.

Running until 23rd August, some of the games include…

A puzzle game for the mathematically minded – players must count up the number of bicycles in the nearby cycle rack, this will become their target number, then they must pick a bike, and look at the five numbers written on it. Using all of the numbers found they must find a way to reach the target. The first player to do this gets a point. 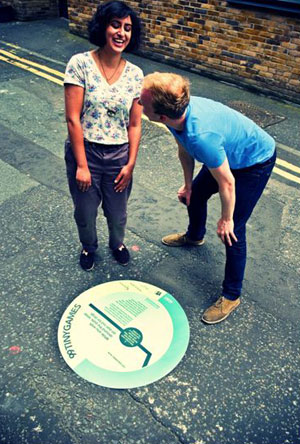 A battle of wits and twigs for two players – both players pick a twig and hold that twig with two hands so that it crosses over with the other player’s twig – on the count of three, the players must pull their twigs towards themselves. The loser is the one whose twig breaks first.

A looking and counting game for many people, to play teach of the players must race to count up to five. To count a number, the player must name an object they can see and how many. For example, if there’s an elephant they could say “One Elephant”, and then maybe “Two Giraffes” (again, if there happened to be two giraffes around). Players must not repeat objects that other people have used. The first player to reach five is the winner.

A word game for two dueling players – players must each stand on a raised slab lining the grass, with one slab between them and swiftly adopt a fencing pose. On the count of three, they must both name somebody they know – a celebrity, a mutual acquaintance, a fictional character. If one player agrees that their named person would win in a fight against the other, they must move one slab forward, and the opponent must move one back. The winner is the one who forces the other player back three spaces from where they start.

To find out more about Hide&Seek’s 99 Tiny Games, please visit the website.