Trending
You are at:Home»The Culturist»Entertainment»A Simple Space
By Will Goldberg on June 11, 2014 Entertainment

It’s not so much what this group of seven young Australian acrobats do; it’s the way that they do it. We’ve all seen similar acrobatic feats before in one guise or another, but “Gravity is a myth” make a point of removing the artifice from it. Instead of the pasted on smiles of the circus folk of yester year they guilelessly catch each other’s eye and grin at the audience. The effect is tremendously charming. Each time they pull off yet another remarkable feet they seem to beaming with pride at their own cleverness. It’s very infectious!

There are no spangles and sequins on display here, they all wear a basic costume of cream britches and pastel coloured t-shirts which the young men frequently remove. Think GAP circa 1995. Nor are their grunts and groans drowned out by loud music as in most circus acts. We see just how strenuous this work is as bodies knock together and hands hit hands. At one point they even make a virtue out of their puffing and panting by using it as a sort of percussive beat to underscore a routine. 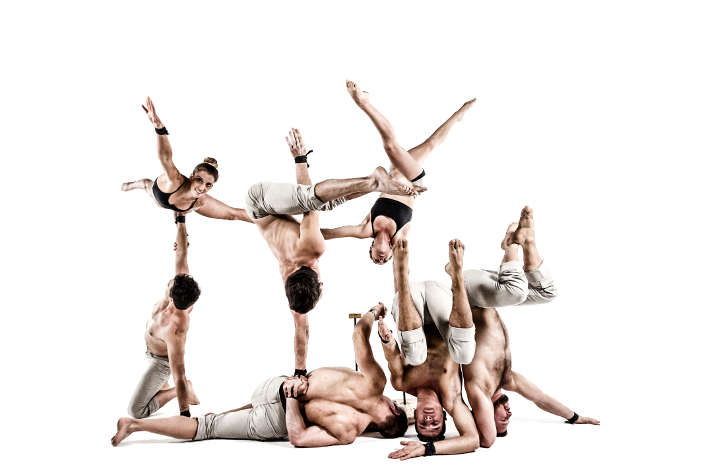 The show is made up of a series of circus games that are then extended into a routine. The ensemble is made up of five men and two women and each gets their turn to dazzle. There are moments when you have to look away and you’ll catch many of the audience doing the same. At one point, as one of the girls was about to do something terrifying on top of a human pyramid, the man in front of me shouted out,” Don’t do it!” It did look terrifying.

The audiences fear is heightened by being so close to all the action. Only an electric drum kit accompanies the action and a little occasional synthesized music. In fact the percussionist is very much the eighth member of the group. He joins in with an amusing skipping competition in which he ends up naked, (very tastefully done mark you), and at one point does a whole solo percussion number using only his body as drum kit.

At an hour long you do wonder what on earth they can do next to hold your interest, but they always do. The evening is paced very well, mixing jokey blokish humour with nail bitingly dangerous acrobatics with some rather beautiful almost balletic sequences and the entire show has an impish cheeky charm that’s utterly irresistible.

‘A Simple Space’ performed by Gravity and Other Myths at the Udderbelly Festival at Southbank. For more information visit the website.