Trending
You are at:Home»The Culturist»Theatre»The Provoked Wife at the RSC
By Alex Larman on June 19, 2019 Theatre

In his excellent account of his time at the National Theatre, Balancing Acts, Nicholas Hytner suggested that his penchant for Restoration comedy was not shared by most of his colleagues, leading him to stage far fewer of those plays than he would have liked. It’s not difficult to see why the sexually charged and fiendishly witty plays of the 17th and early 18th century appear relatively rarely in our theatres. Not only do they require sizeable casts and, if being staged in period, substantial costume budgets, but their cool, cynical attitudes towards love, money and reputation often struggle to connect to modern audiences. In our age of #MeToo and identity politics, staging a Restoration comedy without implicit distancing is a difficult, even dangerous task. Does Philip Breen’s RSC staging of The Provoked Wife manage to do something new?

Breen, to his credit, does not attempt to do anything modish with Vanbrugh’s play. If it isn’t as uproarious an experience as Vanbrugh’s more famous The Relapse, in large part because of an intrinsic darkness at its heart, it nonetheless offers rich entertainment throughout in its tale of an unhappily married woman contemplating an adulterous fling. For some reason, Restoration comedies tend to attract the most spectacular casts; one thinks of Trevor Nunn’s 2001 staging of The Relapse (Alex Jennings, Brian Blessed, James Purefoy, a pre-fame Maxine Peake) or Hytner’s own 2007 Man of Mode (Tom Hardy, Hayley Atwell, Bertie Carvel, Nancy Carroll). 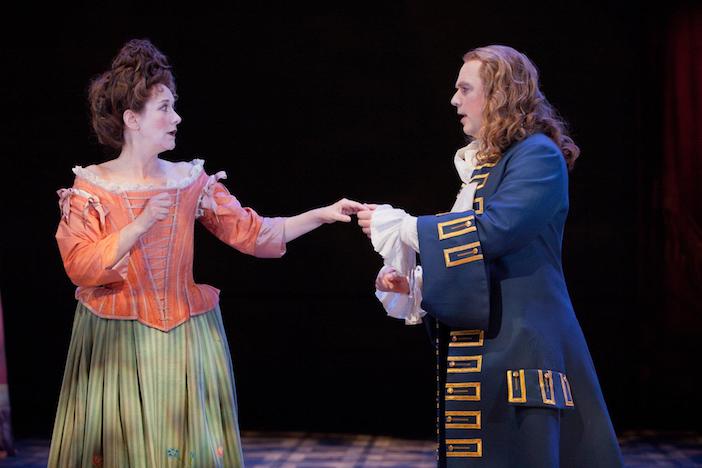 Alexandra Gilbreath as Lady Brute and Rufus Hound as Constant

Here, the peerless Alexandra Gilbreath is a fine, touching Lady Brute, drawn to Rufus Hound’s gentlemanly Constant, even as her thuggish husband Sir John Brute (Jonathan Slinger) drinks and wenches to his heart’s content. Throw in Caroline Quentin, excellent as Lady Fancyfull, a be-rouged and camp grande dame (complete with musical numbers) and one is set for an excellent evening’s fun. There’s even a cameo by Les Dennis, of all people.

Except one isn’t, entirely, because of the central problems with the narrative. Slinger, an excellent Hamlet and Richard III for the RSC, portrays Brute as just that, a foul, thuggish wastrel with a drinking problem. He’s a fine actor who clearly has nothing but contempt for his character, but the problem is that he’s one of the central figures, and so whenever Brute is on stage, the action sags somewhat, despite an excellent comic scene in which he is compelled to wear drag. Gilbreath, likewise, is superb and heartbreakingly moving by the end, but not especially funny. There is a scene of attempted rape in the second half that ends up being quite harrowing, in no small part because of the actors’ conviction; what it is not is amusing or easy watching. 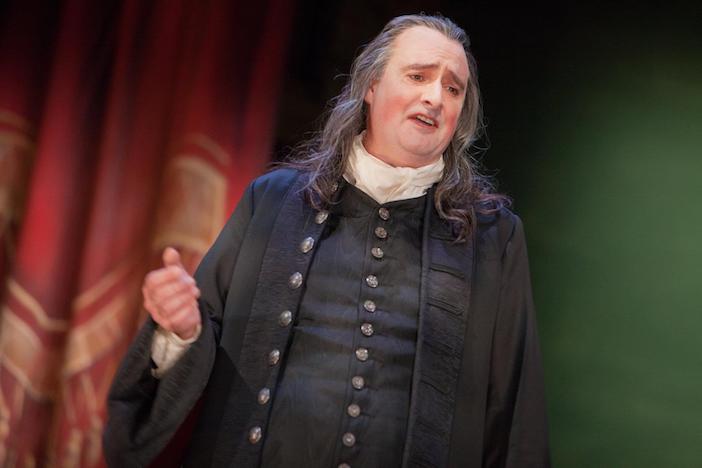 There are, thankfully, laughs to be had elsewhere. John Hodgkinson is an assured and authoritative presence as Heartfree, a confirmed bachelor struggling with a distraction of that confirmation, and Sarah Twomey manages to make a fair bit out of her role of Fancyfull’s French maid. Paddy Cuneen’s songs are excellent, if perhaps rather too many, and Mark Bailey’s design errs on the side of minimalism to good effect.

The audience seemed to enjoy it all, but perhaps Hytner is right; we are in an age where the amoral and cold dissection of society’s mores that the likes of Vanbrugh and Etherege produced means that the merriment often stops before it can be expressed, leading to an enjoyable but oddly thought-provoking evening.

The Royal Shakespeare Company’s production of The Provoked Wife at The Swan Theatre, Stratford-Upon-Avon until 7th September 2019. Running time 3 hours including an interval. For more information, show times and bookings, please visit www.rsc.org.uk.