My companion no longer hears my prattle. All her force of focus is on the warm whip just departed from her teaspoon. Her large eyes have pursed to mascara line. She softly emits a low, rhythmic resonance, akin to purring. She is with a more expert seducer now. He is Thierry Marx, executive chef who devised this leavened truffled custard ‘cappuccino’. It is enduring and depthful and compelling, of the earth, ugly-beautiful in an almost pheromone-steeped sense, and very nearly overwhelming. Not so much just another dish on the Michelin-wound, fine dining conveyer belt, but an unexpected inter-course inferring intimacy, intensely savoured on Chinese New Year. The day also coincides with my birthday, and to behold such pleasure on one’s guest’s face makes a memorable gift. 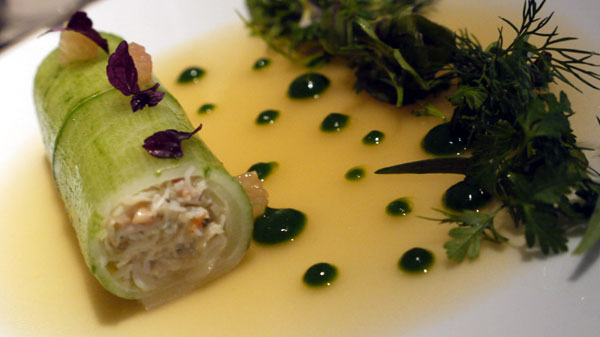 The evening before, which surged into this morning, born of hunger and excitement, I dived chopsticks urgently in simmering homemade hotpot, steaming on a portable hob. All present – Chinese, French and British – were careful not to trip over its wiry lead. Multiple extractions then replenishments of slim slivers of frozen meat, vague but absorbent fish balls and fibrous shitake mushrooms into the liquid gradually transformed a translucent broth into a complex, opaque, textured breadth. But sadly, hunger, of course, dissipated as flavour built…

Today, Camélia, a cocoon from the commerce and costly shine at and alongside the hotel’s Saint-Honoré entrance, where commissionaires, looking like chiselled Slav film extras, stand sentry, offers a more studied take on pleasure. It, like the venue’s moody but absorbing Bar 8 (spanning a nine-tonne gleaming Spanish rock, turned counter), unravels from a tall courtyard, insistently scented by the Asian genus, which confers the restaurant its name.

At the lobby, Adrian Moore, concierge and restaurant culture commentator (voted Paris’s ‘hottest food blogger’ by Women’s Wear Daily) prepares for the imminent arrival of Gwyneth Paltrow, by speaking softly into a handset. Here, as throughout, designers have striven carefully to remove references to the original intention of the 1930s building to serve as office block. Moore’s console overlooks a fertile, subtly undulating living vertical carpet. The actress is apparently one of a long roster of glamorous check-ins which sees rooms and suites, positively outsized for Paris, and featuring motion detectors superseding ne pas déranger signs, reserved many months ahead. 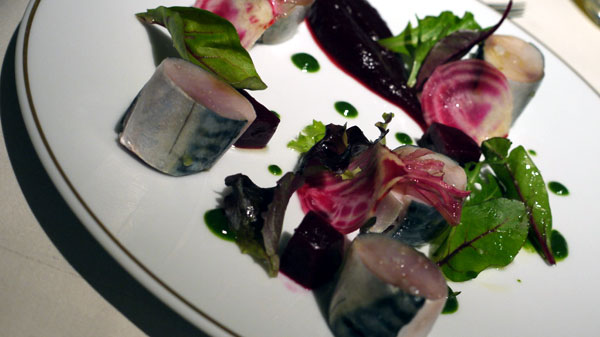 Moore, as several of his connected colleagues, departed the plumply-upholstered ‘Georges V’ for this coolly rehabilitated address when it became France’s first Mandarin Oriental in June. When my guest and I will eventually leave, six hours after making our entrance, he will give us an umbrella, despite the fact it rains no more, and write down recommendations which include a new Tiki Bar in Bastille, and GYOZA BAR at Passage des Panoramas, a slimmed, sleek concept from the minds behind two Michelin-starred mothership, Passage 53.

Although a €45, 45-minute lunch is available, I have not been in an immense rush to arrive at age 32, so I prefer to savour the more leisurely carte. Moore tells me it shows consistent flashes of Marx’s brilliance, available over tasting menu journeys at the ultra-fine dining, fabric-wrapped, even more cocoon-like, Sur Mesure restaurant in another wing (today closed). 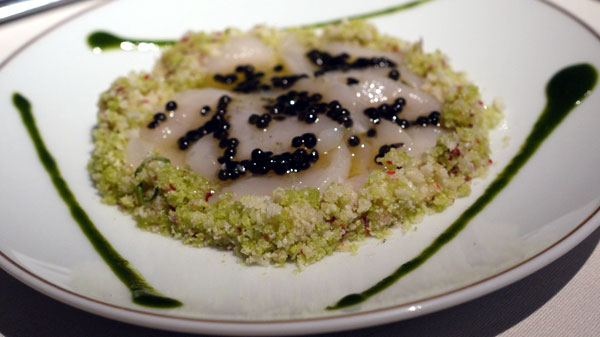 In honour of the ancient street whose name is taken from the patron saint of pâtissiers, despite it being predominantly crowded with fashion boutiques, we finish with Marx’s updated, linear take on Saint Honoré: all puff, pâte à choux, caramel and brimful with cream. The sweet indulgence sits refreshingly lightly and my belt remains on the same notch as when I played bullfight with my napkin. Compared to my 31st birthday, spent at a conference, Marx’s cuisine (today realised by sous chef Arnaud Faye), Moore’s charm and my guest’s remarkable pleasure at kitchen conjuring, have made this a date to remember.