I can spot the conviviality within from across the road, through the large glass-fronted façade. Keen to join in, we dance through the traffic, jaywalking the shortest route to the door.

Inside, if I was expecting more of Corrigan’s Mayfair or Bentley’s, it’s a far cry, but I’m delighted. As we’re met at the door, we’re led through what I thought was the bar to the stairs at the back and we descend into something that quite threw my expectations.

“This is a bit different, isn’t it?” Larman remarked. We were in a long, low-lit, quasi-industrial enclave, a stretch of mahogany on one side, steel-topped high tables and barstools, and dark booths on the other. Large format TV screens are dotted about the walls. Something was up.

Is this where chefs go when the name is made and the hard yards are done? The Michelin star’s won (or doubled), the TV appearances are a staple, you’ve two (or more) high-end, high priced establishments you have your name to and the critic community is poised for the next opening…so, what next? 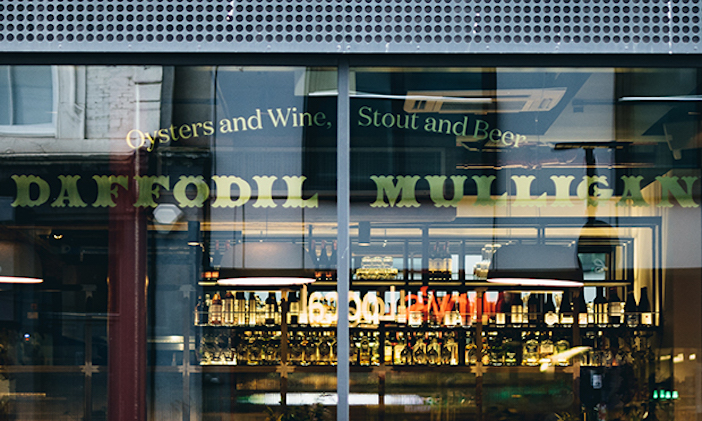 You go casual, that’s what. You have nothing to prove. You do something you love. Something that says, ‘if you were coming for an evening with me, this is what we’d do…”.

Well, you do if you’re Richard Corrigan. Daffodil Mulligan is an Irish pub, glorified.

He is a jolly rogue, after all, marching to his own tune. As comfortable watching the six nations with a pint of Guinness (or Gibney’s, in this case, after the bar we’re in) as he is turning out dishes with an artistry that has kept him at the pinnacle of his game for some time now.

It’s a quiet Tuesday evening but we indulge ourselves at the bar, imagining the atmosphere with the screens showing the rugger, crowds baying for English blood. We temper those spirits with cocktails, a typically Celtic whisky ginger and a Shoreditch sour, the latter given its trendy spin with a Malbec float, before we head back upstairs, and dinner. 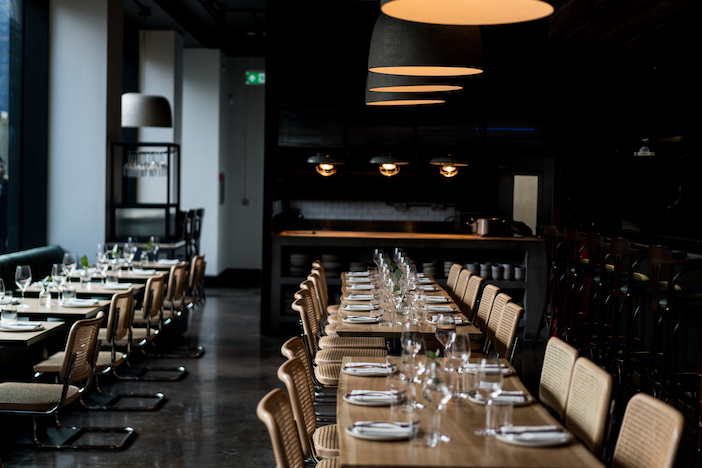 And upstairs is where the action evidently is on a weekday. The restaurant is full and buzzing, all the tables are taken. The music can’t compete with the hum of conversation. As is customary with contemporary restaurants, everything is open; we see chefs at the pass and bartenders at work.

The menu, indicative of the vogue for sharing, is a cornucopia of choice. I don’t know where to look first; puffed pork and caramelised apple, salt chilli chicken with cucumber and chorizo, bass ceviche with blood orange, even kale on toast. This being Corrigan, there’s an abundance of shellfish, too, including a virtual oyster bar.

“I can’t decide,” Larman intones. Nor I. But then something catches my eye; the specials board. I see game sausage with stout mustard. We’ll definitely have that. Then wild boar with squid in coconut. Ooh, intriguing, that too. There’s a scallop ceviche, and a goan curry. Indeed, we end up dismissing the a la carte and going completely off piste. 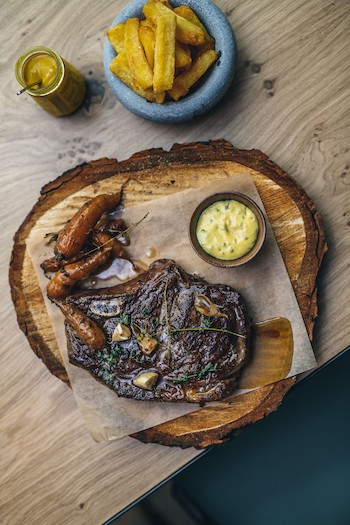 When it arrives, it arrives in quick succession and there’s much crockery chess as we tuck in. While nothing is outwardly fancy on the plate (you wouldn’t hang any of these on the wall and we certainly didn’t start taking any photos), it’s all stock stuff, robust in flavour, at once eclectic and familiar combinations, and there’s plenty of nods of approval among the supping and sipping. Of which, in spite of the gaminess of our selections, we content ourselves with some excellent Jean Goulley Chablis.

Suitably primed, we get onto the business end of things, and if there’s one thing Corrigan’s known for, shellfish aside, it’s fine meat. Larman’s straight in there with the Sugar Pit Pork, but I’m torn between the Tipperary sirloin and the lamb. “Pick either,” he implores, “pick both? You can’t go wrong with Richard’s selection of suppliers…” He’s right, and much as I love the idea of the chimichurri bearnaise, it’s lamb chops for me with spelt and wild pesto. Given a nod with a particularly soft and jammy Malbec (French, of all things), we’re content, chewing the fat while we, err, chew the fat as it were.

In truth, we should have left it there. Surprised by exciting specials, reassured by nicely-done mains; but we craved desserts and this, alas, is where we faltered slightly. The dark chocolate mousse was pleasing enough, but my almond and bergamot ‘sandwich’ seemed a cursory attempt at a sponge cake, albeit nothing that couldn’t be complemented by a viscous, rich Pedro Ximenez.

But I’d be churlish picking holes. Daffodil Mulligan is not meant to haute cuisine. One shouldn’t expect Corrigan’s artistry here, but what you can be assured of is hearty fare with quality provenance. As their moto reads, ‘I’m hale and hearty, the life of the party’ – and, after all, isn’t that what we want from a great Irish pub?