I thought it sounded familiar. I know of a few establishments secreted away in the nooks of London’s most chic neighbourhood (though admittedly the names tend to get lost in the mists of memory), but as I made my way to The Surprise, tucked into the residential streets behind the King’s Road, the bells started to clang. In a former life it was an old haunt, full of fond memories, closing some good nights out, the very essence of a secret, personal local. 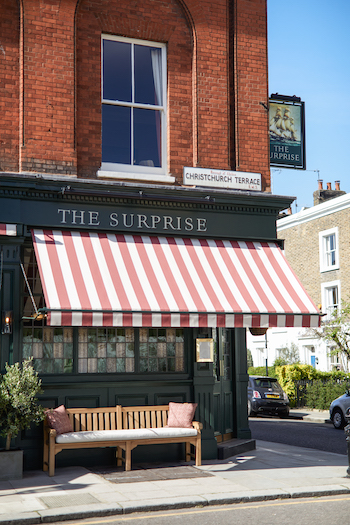 It’s not, however, named for the notion one might chance upon it, rather after a ship. HMS Surprise was a French corvette, captured in 1796 by the Royal Navy, renamed and brought into service, with a swift career in the Caribbean, until being decommissioned a few years later. It was, too, to those of a nautical literature persuasion, the chief vessel of one Jack Aubrey, the fearless hero of the Patrick O’Brian ‘Master & Commander’ novels. Plenty of exciting provenance, then, for a splendid afternoon ahead.

Stirling was already there by the time I arrived, clearly wasting no time ingratiating himself with the barkeep and sipping on something large and frothy. As I passed the bar, I was trying to discern the change since I was last there. Did it look like this ten years ago?

“How do you find these places, old chap?” Not one for indiscretion, Stirling knows a thing or two about splendid and esoteric places to dine, so I took it as a compliment that this one had even him foxed. It was, if you’ll forgive the pun, a surprise to him. Doubly so when I told him I was already acquainted with it from my youth, but now with a fresh new look. Tastefully, delightfully refurbed, with a warming colour palette, the early afternoon sun streaming through the coloured glass on the ceiling-height lead windows, bathing the bar in a pleasant, bright hue. I found him ensconced in the snug, commanding a table in the corner and giving me a look that would wither a headmaster as I walked in, late.

“I couldn’t decide between the Clover Club or the Negroni,” he said, offering me the drinks menu, his frustration at my tardiness dissipating swiftly once he’d realised we were in for a fine lunch, “…so I ordered both. You can have the one I don’t want.” I gave the menu a glance; frankly either would suit, it was a good list. “Oh, and the fish cakes come highly recommended, so I put in for two.” It’s a good job he’s a man after my own heart. 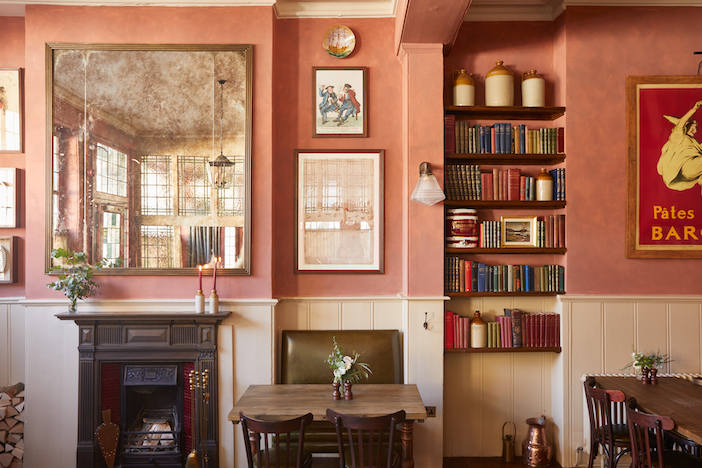 He, and the recommendation, weren’t wrong either. The fishcakes, a trio of mouthful-sized morsels drizzled with mango chutney, were terrific. For one, they actually contained fish you could distinguish. A fine start as we settled in, swapping gossip, competing anecdotes and trading insults.

Our mains, alas, were a little less satisfying. Opting for burgers, where nigh on every gastropub worth its onions boasts its culinary provenance, these felt like a throwback to the ‘90s, as if from a multipack in the supermarket. I didn’t want to match Stirling’s choice, so went veggie to test the water. If vegan fare has progressed substantially these days, this similarly felt like the bean burgers of old. The presentation of each felt underwhelming, too, where anything to finesse the plate might have assuaged our ambivalence. “I hate to say this,” Stirling remarked, “but you could get this anywhere”. Needless to say, I eyed the wild boar sausages on the next table with envy.

Still, dining is so often about the venue, the service, the company, the mis-en-scene; and here we were more than comfortable. Our waiter, Sam, a musician pre-Covid, was fine company and a consummate host, we shared stories about favourite venues, and Stirling and I had much fat to chew (metaphorically, I mean) while we polished off a splendid Primitivo. 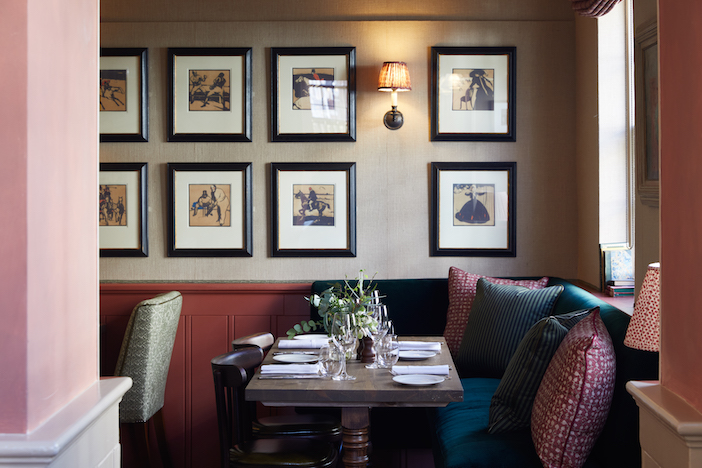 The best, however, was yet to come. After a strong start, a middling middle, like Mo Farah opening his stride and taking the medal, when it came to desserts we were outpaced and outgunned. Indecision and envy made us order both the sticky toffee pudding with salted caramel ice cream and the berry cheesecake. Each, perfectly portioned, proved a font of joy. The former a light, sweet sponge soaked in a gooey caramel; the cheesecake as far removed from the cloying, stodgy brick so often putting me off ever ordering it under normal circumstances. Washed down with a fine Sauternes and coffee, they were delightful conclusions to a thoroughly comfortable, Covid-forgetting, looking-forward-to-summer mid-week luncheon.

Like reuniting with an old friend one hasn’t seen in a while, who appears complete with a fresh haircut and crisp new suit, The Surprise proved a refreshing surprise indeed. That comfortable sense of familiarity, recognising some of the old traits but delighted that they’ve moved with the times, it’s just great to be in their company. And if you’re meeting them for the first time, you know when you know that they’re someone you’re going to like.