Wishbone is a new fried chicken and wings restaurant from food writer and chef William Leigh and one of the men behind the hugely successful Meat Liquor, Scott Collins. It is the newest addition to the now uber-cool Brixton Village, which takes its residency underneath the rail arches of the railway station. 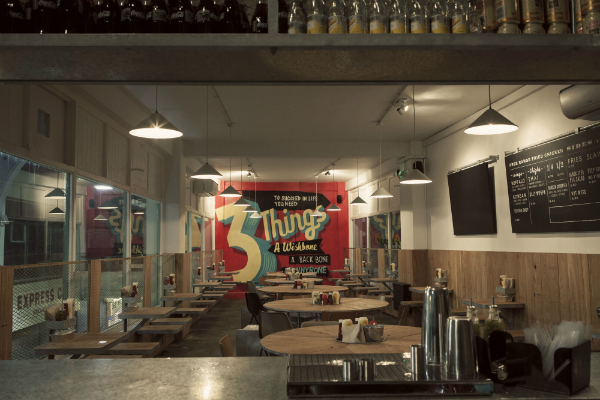 Below these arches the “Village” has been transformed into weaving streets selling everything from burgers to frozen yoghurt, Beijing street food to artisan coffee. Its inhabitants are a new wave of food adventurers, young’un’s who care about what they’re eating and where it comes from.

But it’s a community setup where perhaps it’s not needed. Inside are new businesses run by a different class. Intrepid gourmands creating a slice of Borough Market or Shoreditch in South East London, all food obsessed. During my visit the only ethnic person there was a security guard; everyone visiting, eating and shopping were white, middle-class twenty-somethings, while outside the real Brixton market continued.

I can’t comment on the people who visit Wishbone; maybe they’re locals who really care about the sourcing of their chickens or shoppers who think they’ll give Cottage Chicken a miss tonight and try ‘tamarind dressed wings’ instead? Perhaps, it will become a destination restaurant, somewhere people are happy to travel to for a basket of wings.

Whatever Wishbone’s future, wings must be the in-thing right now. We’ve had cupcakes, Scotch eggs and burgers, and the current fodder void now appears to be a showdown between wings and Ramen, if Twitter is anything to go by.

Wishbone’s chickens are free-range, making them the UK’s first free-range fried chicken restaurant. Try saying that when intoxicated. This removes guilt when ordering, so you can enjoy the lathered-up, sweetly, sticky, spicy dressings falling from wings and free-range breasts. 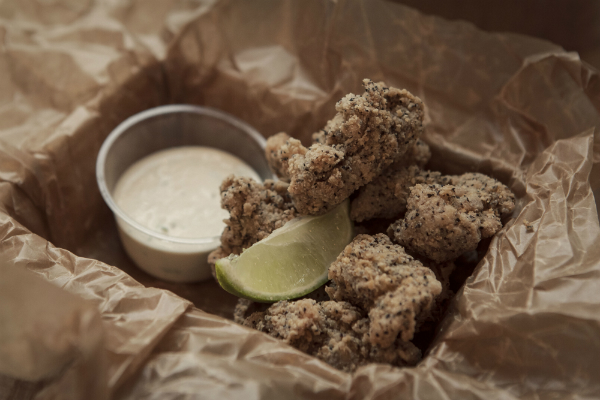 What arrives are large wings, deep-fried and ready to be torn-up, chomped-on and fingered apart. Destroyed in the correct hands, merely picked through in the wrong.

Wishbone, like all the best restaurants, does that to you. It abandons you of pretence, replacing preconceptions and removing food guilt, allowing you to slather your pie-hole in grease and chicken-dripping while chuggin’ bottles of beer and lip-suckin’ your chubby fingers clean. This is what the excitement of food is about. It gave me naughty, late-night thoughts of peeling brown skin from a scorched-bird-in-vegetable-oil. That chicken-skin-crunch and the moist entry into warm flesh; the slow picking-apart of skin and the rummage through small bones for remaining traces of loose meat.

I maintain that the kindest thing you can do to a chicken is pluck it, boil it and bread it.

But haven’t wings already been taken to their highest point? Most customary restaurants serve portions of buffalo and/or chicken wings, and despite their high-street chain status, Nandos and KFC still produce some pretty good wings. To my knowledge, Nandos is the only high-street chain in the last ten-years who have successfully emerged and put chicken on the map. Whether you like what they do or not, it’s a success.

I have no doubt that Wishbone’s fried chicken will have certain locals in a frenzy and bloggers ejaculating over their Nikons. They’re very fine indeed and should be applauded for their free-range sourcing, but will this new addition to Brixton Village be exciting for all locals, and can they be prized away from Nandos and KFC; do they want to be? 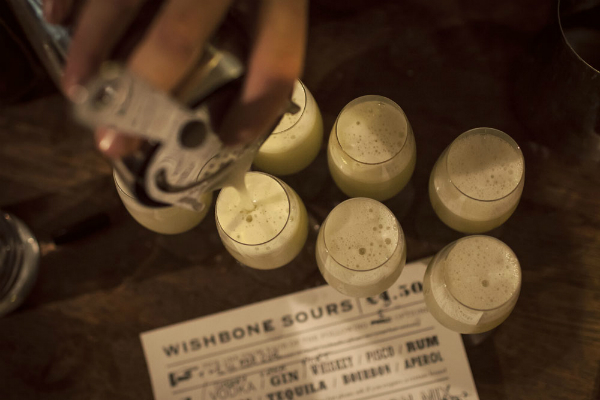 Mac and cheese arrives as large cubes in a Styrofoam cup. They look like giant Tots but are sumptuous squares of deep-fried cheese and pasta inside a breadcrumb casing. Each is hot and breaks away into gooey cheese, with the slightest bite of curly pasta. The recommendation from staff of a whisky sour clears my throat after each bite, preparing me for the next.

The man behind Soul Shakers has devised the drinks menu and it’s an impressive list, with a well-crafted whisky sour and the likes of Hobo Beer and craft lagers being supported. If you can hang out here before a gig at the Brixton Academy, eating wings and getting sloshed, then do it.

I think a divide will form in Brixton between carnivore affectionados, and that’s fine. But where does Wishbone fit? There will be those who think two-quid for a dozen wings at Chicken Cottage is applaudable, and those who are happy to spend a few extra quid at Nandos, seeing it as a high-branch chicken outlet. Which customers Wishbone win over, is yet to be decided, and it will not be clear until they’ve broken in and a new food trend emerges. For now, bloggers and bon viveurs are filling the stools and ordering their baskets of chicken – because it is the best around!