Trending
You are at:Home»The Lifestyle»The Idler»Fiction»One Night in the Summer
By Harry Chapman on September 8, 2013 Fiction

Last Saturday night, David and Katharine left at eight and I slipped out for a walk at eight thirty.  The Chiddingly walk.  At this time of year it is more or less dark at a quarter to ten, fully dark I’d say by ten.  The walk takes a good hour and forty minutes so we were racing against the clock.

We (that is Frodo and I) set out at a trot.  No dawdling.  No time for extended bouts of sniffing or taking in the view.  The dog felt my urgency and we sped through the countryside, bisecting the field of sheep with the now adolescent lambs, waving at the farmer’s boys who were heaving out feed from the top of an open-backed van, darting along the dusty lane which wound between farmsteads and great hay-filled barns, past the newt pond, back onto the road and past the Elizabethan Manor and adjacent barns. 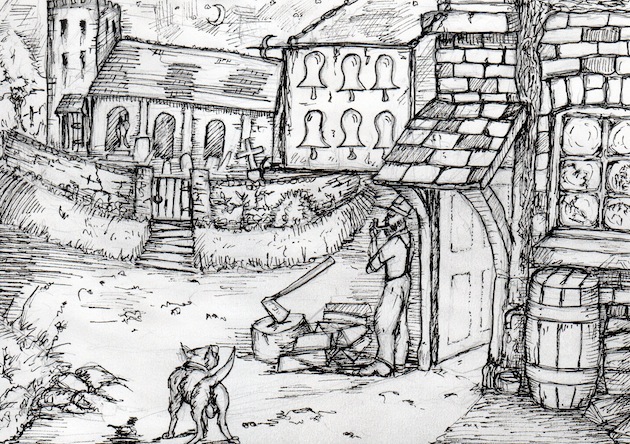 We fluttered up the long, straight road to Chiddingly like a couple of ghosts as the day’s symphony ended, twilight descended and the earth breathed out a lavender haze with it’s contemplative birdsong.  We fled past the pub, dodging sharp laughter from the doorway and turned heads, went left at the church, over stiles, slicing over the back of the countryside, down through the swampy hassocks, up over the hill hugging the lee of the stud and straight across the newly flayed turf fields.

The purple light had darkened to a deep blue as we plunged down the steep wooded hill and crossed the River Bull, but there seemed to be more light than there should have been, and strangely it seemed to emanate from the earth, so that when your eyes drifted heavenwards, they were overtaken by night.  In fact I judged there was enough light to pause at the end of the chicken shed with its electrified range, and fill a bag full of candyfloss elderflower.

We were on the home leg now and struck out confidently across the large sloping field which had once been defended by shoulder-high nettle but which was now sown with thigh-high grass and clover.  We skirted the bluebell wood before turning in and following the course of the River Bull through wilting patches of wild garlic and pitted flood plans, crossing it for a second time, up the Western hill chasing the dying light, and past the slatted skeletal hulks of the Hope Farm barns. 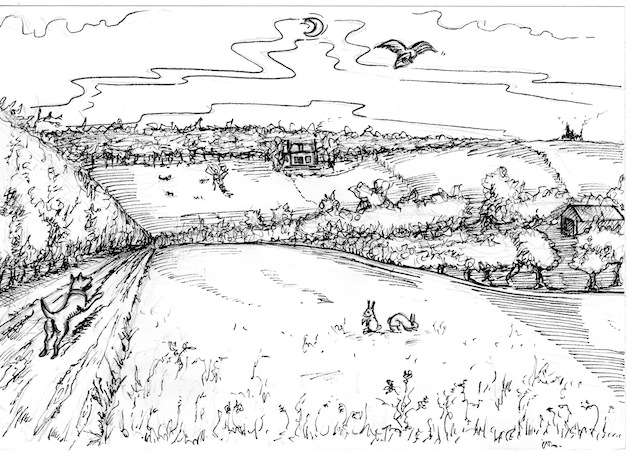 We crossed the last road and entered a field whose lee-side was littered with the mixed detritus of a modern farm – reams of rusted corrugated iron, old machinery half-buried in mud, a slipped hill of ruptured railway sleepers. We could practically scent home from here we were so close. But the light was so weak it was difficult to tell whether it belonged to the sun or stars. There were two ways open to us – down through the wood which opened onto the bottom of the garden by the lower lake, or through the lanes which would add another fifteen minutes to the journey. Feeling intrepid I opted for the former, reasoning that there would probably be enough light piercing the forest canopy.

We jogged our way down the hill to the tree-line and worked our way along until we found a passage through the nettles. The wood beyond was black and I had to swing  the dog lead in front of me to find the low-lying length of barbed wire that encircled it. Even the dog had trouble negotiating it. I floundered down the bank. I knew the way so well I often thought I could do it with my eyes closed, but here I was with my eyes open and I was struggling to find the route. 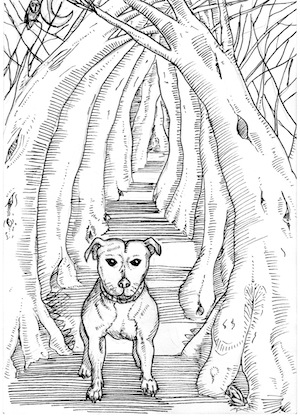 I felt my way across the stream but by the time I had got to the path I knew that it was unlikely I could do this. Either I retraced my steps and made my way back along the lanes, or I needed assistance. Usually by this stage in the walk Frodo had sniffed home and bolted, leaving me to trudge the last half mile on my own. On this occasion, however, whether it was because he also found the dark a struggle, or because he sensed my helplessness – and I hoped the latter but feared the former – he had stayed close. I crouched down and whispered his name, not wishing to disturb the solemnity of this night time world, but in truth the superstition of my ancestors, of witches and goblins and sprites, had risen to my gorge, and I was frightened. I could see Frodo’s outline a couple of paces ahead and knew he was looking at me in his recalcitrant way. For some pig-headed reason only known to him he wouldn’t come to me. I waddled forwards on my haunches and grasped his warm, sturdy little frame. Already I felt encouraged. I fingered his collar and snapped on the lead. Slowly, one step at a time, respectful of my inadequacy as if guiding a lame old man, the dog who I had taught, punished, chided, teased, force-marched on walks who we all thought was extremely selfish, led me gently out of darkness. I had also loved him and maybe this was his way of saying, “I know. And I you.”