Thursday last, at the pond, early morning, at about a quarter to eight. Sun grins down on me, the first sunny day in a long time. A nascent but confident Sun, full of vitality and young strength. “Here I am,” it says, “I’m back and as powerful as ever. Did you doubt me?”

A green parakeet circles overhead and glides, squawking, into the embrace of a vast old lime. Higher still three sea-gulls soar and fall, crying plaintively. Men towel themselves vigorously or bask smiling in the day’s youth – old men and middle-aged who face the lengthening shadows of life’s afternoon. A new group arrives. Greetings and banter erupt. The runners. One of them stands out. He is fifty or more. He is tall, with the lithe sinuous body of a thirty year old. A great anvil of blonde and grey twisted hair surmounts a striking face lined and baked brown by days on the Heath. 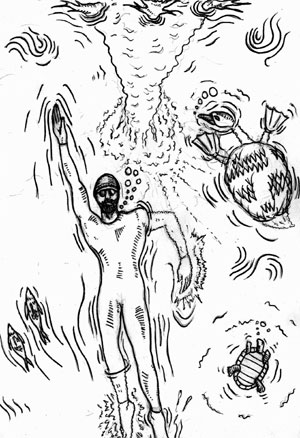 He stands on his head and recounts a story of releasing gold fish into his garden pond and how his girlfriend believes they were miraculously dropped there by a passing osprey. Laughter. Male laughter. Deep-throated and good natured with no females to impress or provoke. Camaraderie abounds. These are intelligent cultivated men who discuss politics and art like citizens of the old forum.

I plunge into the brown sluggish waters and catch my breath. It is cold and I swim awkwardly for the first fifty yards as I acclimatise to the new medium and hunker down to the constricting inhibitions of my black rubber wetsuit. My unhealed sores chafe and open up at the seams. I picture them widening at every stroke, oozing blood and serum. My strained neck begins to catch at my right-head turns and on the second lap I am set upon by a male swan by the large jetty as I stray too close to its mate and cygnet. It is a warning and I’m allowed to continue, diving beneath the main jetty and breaking the water on the other side as I emerge into air. I cut doggedly through the waters, plotting my usual course of six laps over forty minutes.

Finishing I haul myself up the iron steps, pausing at the top as the faintly warmed waters between skin and leggings breaches the cuffs and rolls down my ankles. I reach up and pull down the zip at my nape, wrenching free of the heavy cuirass. Sunlight bounces off my wet skin and I turn, as I usually do, and scan the water-filled basin fringed by willows, filled with fish and overhung by a glittering sky, and feel animal and alive and thankful, lost for a few moments in an image of Elysium.