Trending
You are at:Home»The Explorer»Hotels»A Literary Break at Summer Lodge
By Rebecca Lipkin on March 7, 2019 Hotels

Take inspiration this World Book Day and embark on a literary-themed adventure in rural England. Few authors are so associated with the landscape in which they were born and raised than Thomas Hardy with the county of Dorset, while few hotels offer a richer, more immersive literary setting than Summer Lodge, set within rolling hills, close to the South Coast and steeped with associations of the writer who so evocatively immortalised his homeland.

A Georgian Grade II listed property in the picturesque village of Evershot, Thomas Hardy was commissioned to draw up architectural plans (his original profession) for the 6th Earl of Ilchester in 1893 when Summer Lodge was enlarged and a second floor added. Now a five star hotel owned by Red Carnation Hotels and a member of the prestigious Relais and Chateaux, it not only adjoins the 9000 acre Melbury estate and deer park but is set within its own four immaculate acres where you’ll find a croquet lawn, tennis court and an attractive stand-alone spa with two treatment rooms, sauna, gym and an indoor heated pool. 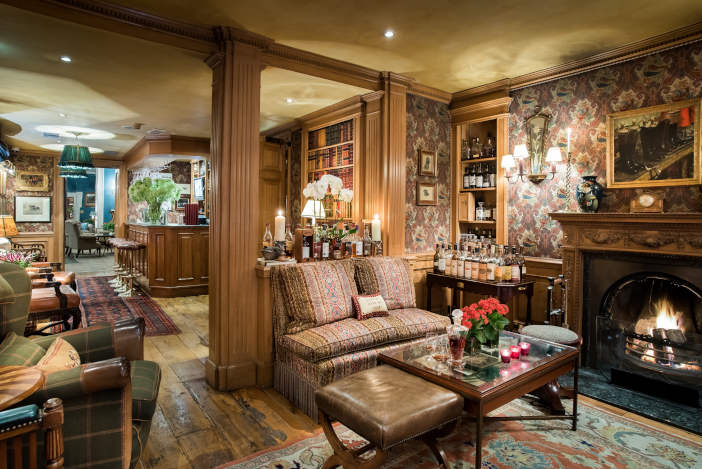 Having embarked on an extensive yet sympathetic renovation on purchasing the property in 2003, Red Carnation have retained all the character of Summer Lodge whilst elevating the public rooms to five star opulence; lining the walls in the public areas with luxurious fabrics and selecting elegant furnishings and pictures befitting a luxury country house hotel. Despite the aristocratic portraits and grandeur, it always feels comfortable rather than formal, an ambiance the staff maintain with friendly, efficient service that is always delivered with a smile. It’s very much a Red Carnation Hotel in this respect and as such feels like a home from home from the first.

With Red Carnation’s owners keen dog-lovers, this warmth and hospitality is extended to four-legged friends, with dogs permitted everywhere except the restaurant and offered a VIP (Very Important Pet) personalised service including food and water bowls, Lily’s Kitchen dog menu and a selection of beds to choose from. You certainly won’t be short of fabulous walking routes around here, just borrow a pair of wellies and explore at leisure with your favourite companion. There is even an outside ‘dog-wash’ station for when your pooch gets muddy, along with ‘woof’ towels. 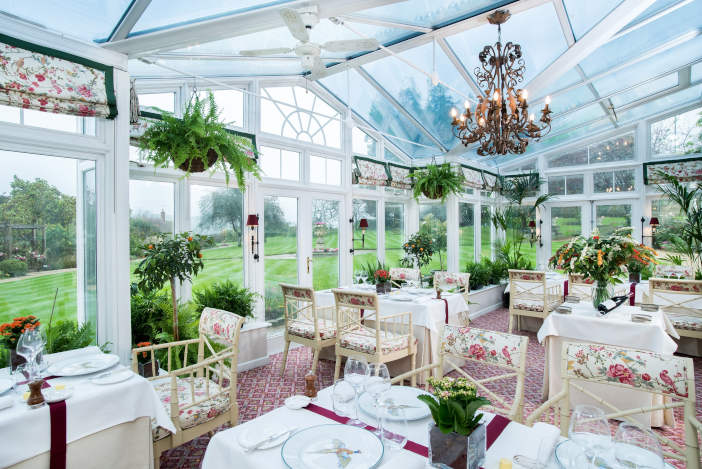 Just 19 deluxe guest rooms and 5 luxury suites, along with the self-contained Ivy Cottage, makes Summer Lodge a boutique environment where guests are spoiled with REN toiletries and 24 hour room service. Our suite, decorated in tranquil blues, with traditional blue and white plates displayed over the large, comfy bed, boasted its own conservatory and private terrace with sun-loungers, ideal for breakfasting or unwinding in your fluffy monogrammed white robe on warmer days, nor was there any Nespresso faff to contend with, just a kettle, a good selection of teas and coffees, and delicious homemade shortbread.

In 1995 the entire cast of Sense and Sensibility, including Imelda Staunton, Emma Thompson, Kate Winslet and Hugh Grant, stayed at Summer Lodge during filming at nearby Montacute House, while Gwyneth Paltrow and Toni Colette also visited whilst shooting Emma, which features location shots of the idyllic Evershot, an English village it appears time forgot, complete with a 150 year old bakery. If you’re travelling to Evershot from London you will most likely pass the iconic landmark Stonehenge in Wiltshire, the memorable setting of the finale of Tess of the D’Ubervilles. 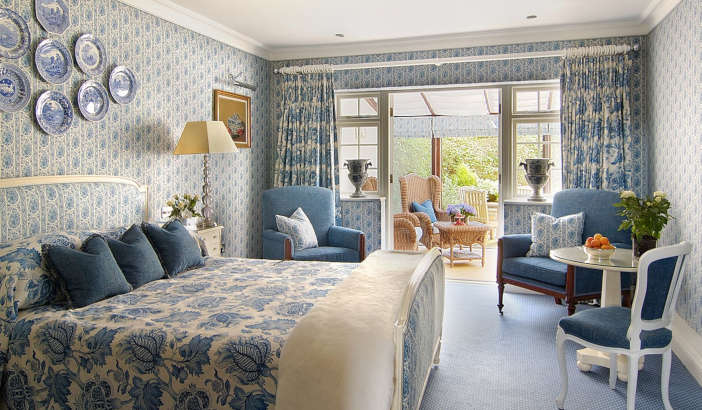 It’s worth arriving at Summer Lodge in time for their very special Dorset afternoon tea, for the pursuit is a justifiably popular one, whether taken on the garden terrace in summer or in the ladylike duck egg blue drawing room with its appealing log fire and board games and newspapers at your disposal. Whisky-lovers will meanwhile have a premium selection to sample in the cosy wood-pannelled Whisky Bar, the perfect setting for a nightcap by the fire after dining at the 3 AA Rosette restaurant. A table in the conservatory overlooking the manicured lawns is glorious for lunch or dinner on long balmy summer evenings, with a modern European menu designed by Executive Chef Steven Titman that is inspired by seasonal, local Dorset produce, not to mention the hotel’s close proximity to the coast and Red Carnation’s passionately foodie founder Beatrice Tollman.

A starter of Portland crab featured a tube of wafer-thin bric pastry filled with crab mousse, alongside a dressed white meat tian with natural yoghurt, accompanied by compressed mango and avocado purées. A main of Tandoori spiced John Dory fillet displayed a deft touch, with a delicately spiced, vivid green spinach puree and a potato and cauliflower ‘Aloo Gobi’ marrying well, while a dessert of Valrhona crémeux with manjari sorbet, nibbed cocoa tuile and white aerated chocolate showcased the outstanding technical abilities of pastry team Kiaran Mason and Benedetta Mazza. Cheese can and should be taken as an extra course, with 26 out of 27 selected from premium South West producers. 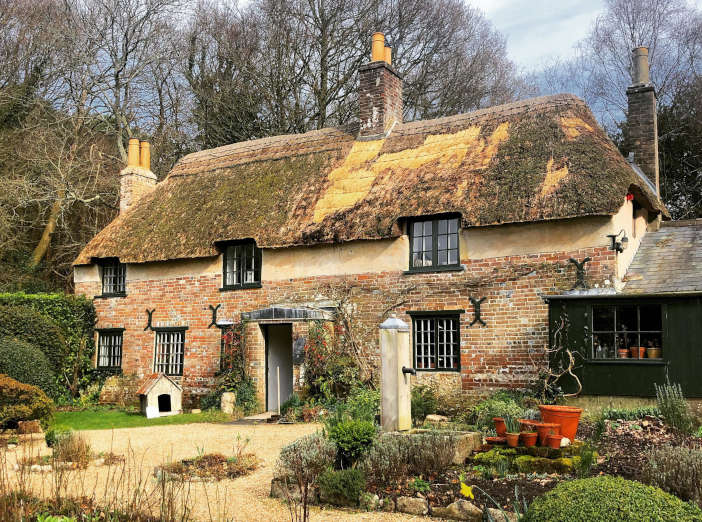 The conservatory proved a magnificent breakfast spot the following morning, where a full English set us up for a day of literary meanderings. A scenic half an hour drive brought us to the National Trust owned Hardy’s Cottage, a charming thatched dwelling within Thorncombe Wood where the writer was born and lived until he was 34. Hardy’s more affluent later home, the red-brick Max Gate, which he designed in 1885, is also managed by the National Trust and lies nearby on the outskirts of the town of Dorchester where you’ll find an impressive life-size statue of Hardy presiding over the townsfolk, who doubtless haven’t changed much.

Finally, we ventured to “Lawrence of Arabia’s” famous bachelor-pad Clouds Hill, the home T.E. Lawrence bought in 1923 due to its close proximity to Bovingdon army camp which now boasts the famous Tank Museum. Tragically, in May 1935, whilst riding his motorcycle, Lawrence collided with two errand boys and died a few days later, aged just 46. Buried in Moreton, his funeral was attended by many dignitaries including Winston Churchill, a tree was planted to mark the site of the accident and the T.E. Lawrence society added a stone memorial. Other literary discoveries close to Summer Lodge include East Coker, the resting place of T.S. Eliot, while Poet Laureate Cecil Day-Lewis is buried at St Michael’s Church in Stinsford, where Thomas Hardy was christened and his wife Emma is buried. Further afield, explore the quaint coastal town of Lyme Regis which features prominently in Jane Austen’s Persuasion. 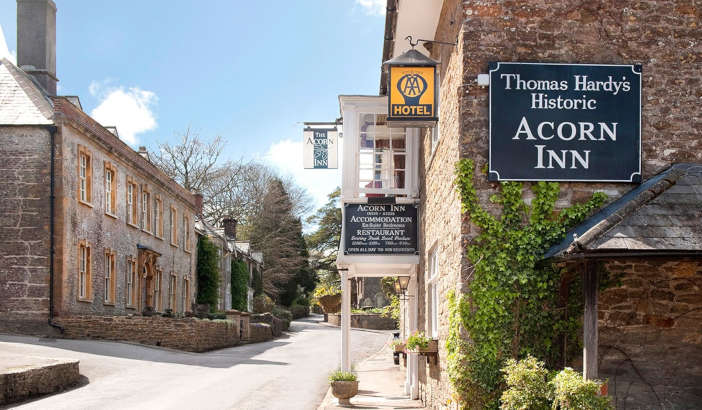 Back in the peaceful village of Evershot (commonly referred to as Evershead in Hardy’s novels) we navigated the Thomas Hardy walking trail which passes a number of sites featured in his works such as the thatched ‘Tess Cottage’ named after his beloved heroine whom he placed here. The 16th century, beamed Acorn Inn on the high street, is also featured in Tess of the D’Ubervilles, renamed ‘The Sow and Acorn’ and is worthy of a visit regardless of whether you’re a literary buff.

Owned by Red Carnation, a Sunday lunch of rabbit lasagne followed by Dorset sirloin of beef with exemplary trimmings, along with a girdle-busting dessert of sticky toffee pudding with caramelised banana and custard felt like culinary poetry indeed. The Acorn Inn upholds the traditions of this glorious county, offering the traveller fine food and literary inspiration aplenty. Drinking a toast to Hardy and the places we appreciate all the more because of him, what a superb venue for bringing our pilgrimage to a close, even if we left Evershot as reluctantly as one ends a good book.