Trending
You are at:Home»The Explorer»Hotels»Paradise on Stilts: The Sheraton, Maldives
By Sarah Tucker on January 29, 2020 Hotels

The atoll of islands of the Maldives kicks every travel writing cliché into touch. Talcum powder sand, bath-warm waters, the best (arguably) diving experiences in the world (kudos if you take your PADI there), beach villas with open-air bathrooms, ticking that bucket list item of showering under the stars, the occasional warm rainfall adding to the sensual experience of washing behind the ears.

Then, of course, the ‘wow’ ocean views from the mahogany beds in your ocean villa raised above the sea on stilts, the sound of the Pacific lulling you to sleep; the shark feeding, the dolphin watching, the parasailing, the sea bobbing, the exquisite quality and variety of fine dining, the absence of mosquitoes, and ability to not see another living soul should you wish.

There’s more. The fact every staff member on the island is a licenced baby sitter, and for every guest a ratio of two, if not three, members of staff just for you. Near-empty pristine beaches with strategically placed hammocks and swings, where every angle is an Instagram hit. Where sunsets are chakra colours and sunrises are…oh, stop it. 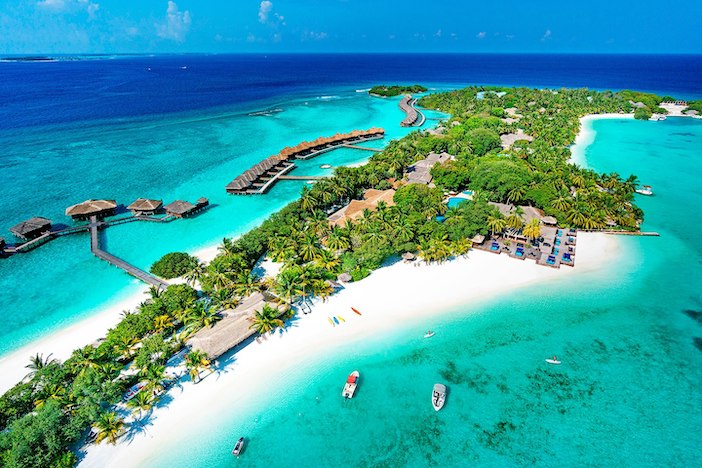 The Maldives, just an eleven hour flight from London Heathrow, twice a week with British Airways, into the main island of Male and onwards by boat or seaplane to your own island, is one of the destinations we are sold every January. Some consider them boring, cabin fever setting in as you pace, bear-like around the same patch of beach. Not me.

As I fly in, the island atolls are more beautiful than I remembered. The last time I visited the Maldives was over ten years ago, where the adults-only luxury resort I stayed in was only accessible by sea plane, a twenty-seater scheduled to stop at three other islands before landing on mine. By the time I arrived, it was over two hours later from picking up my bags at Male, I was shattered and already dreading the journey back.

This time was totally different. The journey to the Sheraton resort (now part of the Marriott group) is a fifteen minute fast, sexy speed boat ride to the island. On arrival I’m greeted without fuss or forms, shown to my beach villa and within a few minutes took the obligatory walk along the beach, sand between the toes. 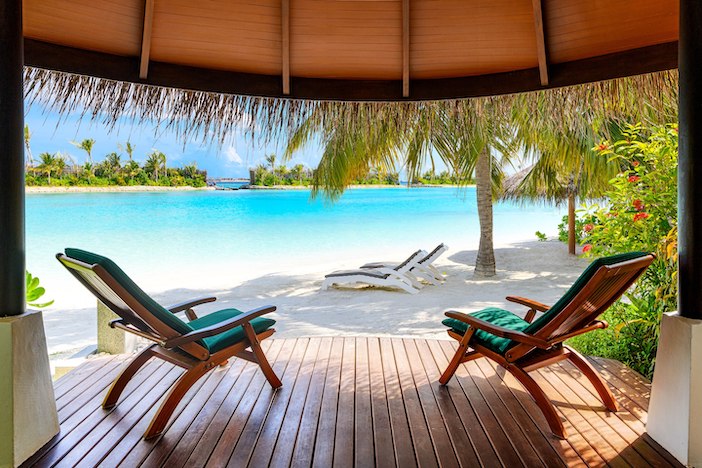 A recently renovated five star island resort with over 170 guest rooms, it’s one of the oldest island resorts in the Maldives, boasts seven restaurants, bars, spa, three fresh water pools, and can cater for families as well as honeymooners, even though both rarely mix well – you’d think one set might inspire the other, but it often has the opposite effect. To be fair, they tend to keep themselves to themselves and are rarely seen out in restaurants at the same time, the ‘mooners emerging as the little rays of sunshine are retreating into the dark. The Sheraton also sells itself as being ideal for singletons and solo travellers – and the variety of water sports, the excellent snorkelling and diving make it an option for those who prefer their holidays below ocean level rather than above it.

As well as its brilliant accessibility once you arrive, they have a unique, and rather delightful, policy of balancing out the nationalities in situ. That means the same number of Brits, to Germans, to Spanish, to French, to Americans, to Russians, to Japanese to Chinese to, well, everyone. Everyone has their quota. Even with the, shall we say, more vocally and physically present, the quota remains even and the atmosphere even when the resort is at its most busy (at breakfast) appears good natured; it’s never crowded, and devoid of queues, even at the omelette counter, and the noise never raises above a hum. 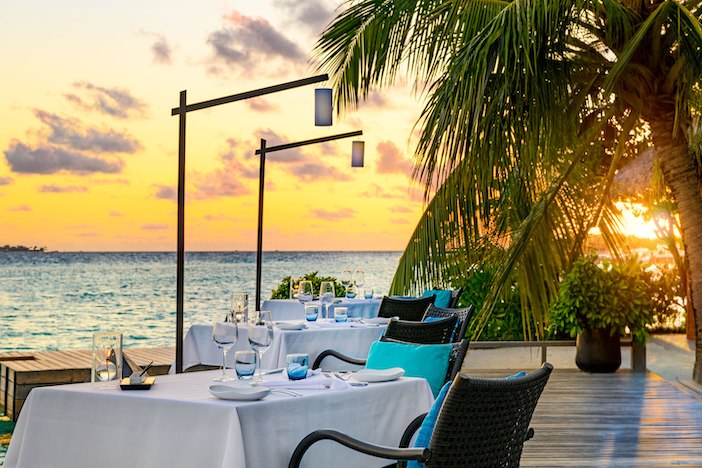 The Sheraton’s restaurant of choice is Baan Thai, offering cookery courses from its Thai chefs, who will tell you how to use local spices and why you should never bite into one of the small red ones, but dining choices are plentiful and various. Exotic options aside, local dishes at Sea Salt bloom with freshness, especially the Maldevian fish, and a tea room serves made-that-day macaroons with a variety of teas concocted from local flowers and herbs. Equally varied is the choice of where and how you want to eat; the staff will happily take your table into the ocean, should you wish. I ate in the ocean on the first day of my visit, and it was an intriguing experience, feeling just a little incongruous tucking into my fish while its colleagues swam around my calves.

As you might expect from a Maldives resort, the Sheraton has an enviable spa, with a heavenly relaxation area of an entirely large glass room set in a tropical garden. Very Soylent Green, if you know the film, and it is heavenly indeed. For the energetic, extensive gym and yoga sessions are free, as well as coconut tree climbing and kayak racing if you’re tapping into your inner Tarzan. For my part, parasailing is the go-to activity here, giving you an excellent view of the island and perspective on all the other islands of the Maldives. 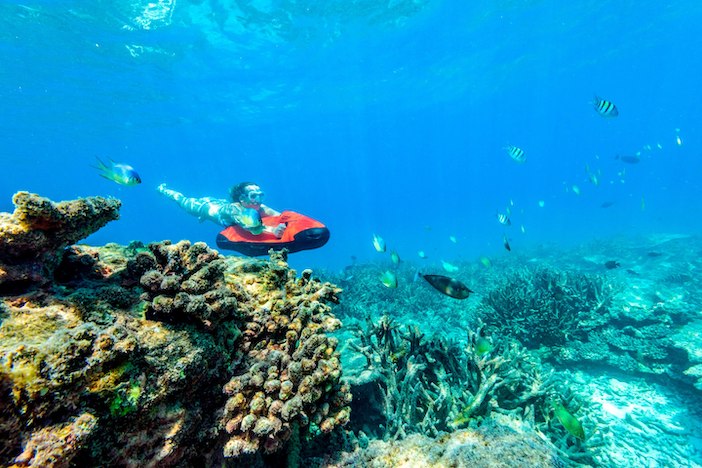 Of the three occasions I have had the privilege of visiting this part of the world, this was the most pleasurable. Easy access, easy nightlife, and thrust into nature with plenty of natural shade amongst the coconut and banyan trees, fragrant orchids and frangipani. It’s that comforting, the fruit bats are out during the day as well as the night, scuttling lizards cross your path and little quail-like waterhens scamper on the beach, and colourful geckos click a soundtrack backdrop making me realise that the hotel’s five stars are given the X factor by the location.

The Maldives is, truly, a once-in-a-lifetime destination, and the price of such a resort, as per any resort in the Maldives, renders it so. But, at a time when concern over rising sea levels might threaten their very existence, there are some things you simply can’t put a price on.