Trending
You are at:Home»The Explorer»Hotels»The Cotswolds Revisited
By Alex Larman on August 25, 2020 Hotels

Heading off for a trip to the Cotswolds at a time of national pandemic might, in retrospect, not have been the smartest idea for my family and I. But there were many extenuating circumstances. For a start, my beloved wife was turning a significant age, and it seemed churlish to mark the occasion by sitting at home looking paranoid and eating baked beans in a mask. And for another, we had been looking forward to our jaunt to two of the jewels of the Cotswolds, Broadway and Chipping Campden, for a significant amount of time, especially when it became clear that international travel would be an impossibility. So we headed up to Broadway on the Cotswolds Line, as GWR so grandiloquently call the train that passes through many of the small Cotswolds towns, and prepared for a treat.

If you have never been to Broadway, arguably the most beautiful of all the towns in the area, then you are in for a magnificent treat. It has splendid buildings, excellent independent shops and a museum and art gallery that has long been affiliated with the Ashmolean in nearby Oxford. The pubs, cafes and restaurants are a mixture of the modish and traditional, and it’s quite the nicest place to venture for a short break away. But the crowning glory, and one of the finest hotels that we have visited in a long time – or, inevitably, since – is the Lygon Arms. 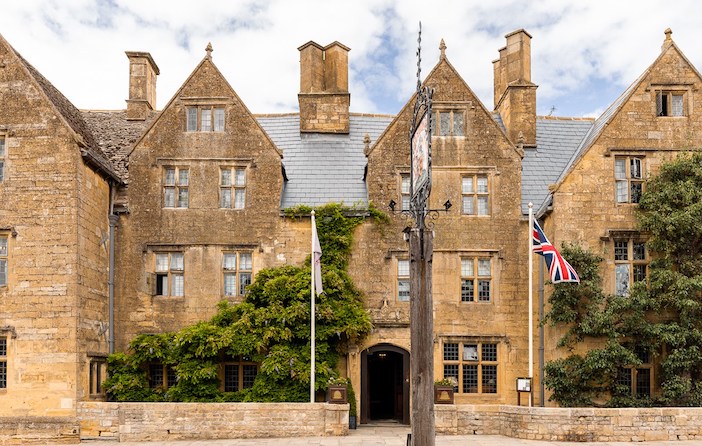 Part of the Iconic hotels collection, which also includes Cliveden and Chewton Glen – for our money, the greatest pair of luxury hotels in Britain – one would expect the highest class when it comes to food, drink and comfort, which was more than met. What was new and hugely welcome here was the warmth and friendliness of service, under the most trying of circumstances.

The Lygon Arms, for the uninitiated, is a coaching inn that dates from the 16th century, and has reputedly hosted both Oliver Cromwell and Charles I in its time, as well as countless other celebrities and leading figures. Fittingly, Richard Burton and Elizabeth Taylor popped in at the height of their fame, in 1963, and many has been the glamorous couple to have waltzed through the doors since. I like to think that we continued the tradition, albeit with our lively daughter to add a certain familial stability to the derring-do. But what we were so struck by was how superbly done everything was. 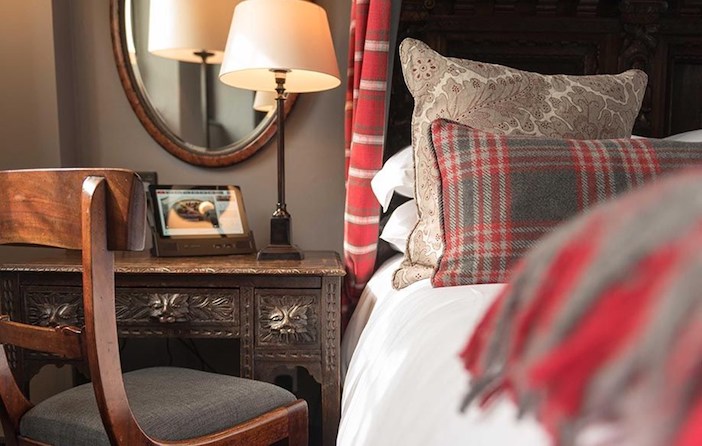 The room that we were staying in, an attic converted into a lavish suite, had all the superb comforts that one would expect – and, no doubt, had been quite the effort to convert and update in a historic and listed building like this – and the extra touches, like complimentary soft drinks in the fridge, were every bit as welcome as the oh-so-comfortable bed and wonderful bathroom. ‘I could happily live her’, my wife said, as she sipped a glass of champagne. It was all I could not to concur.

The spa at the Lygon, situated in what looks like a carefully converted cottage, lives up to the highest expectations one could have, and a brisk swim, complete with over-excited four-year old trying her best to bob about in the water, more than worked up an appetite for dinner. The brasserie here, the Lygon Bar and Grill, is the grandest of rooms, decorated with what looks like a fine assortment of portraits of everyone from grand aristocrats from the 17th century to more contemporary figures, although I looked in vain for Burton and Taylor. 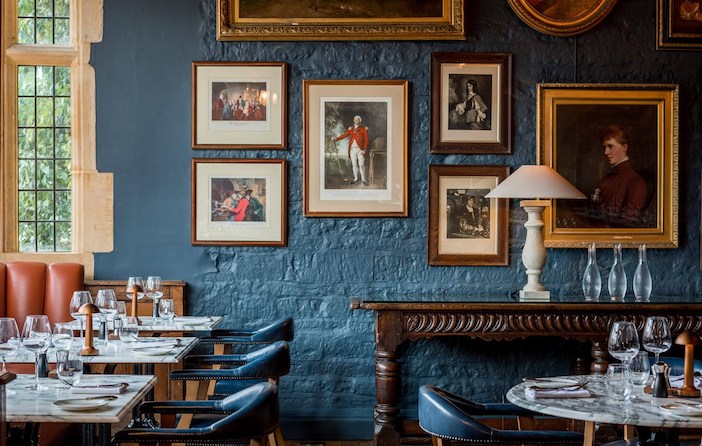 The food does not attempt to reinvent the culinary wheel, if such a thing could exist, but is executed at the very highest levels, especially a twice-baked Emmenthal cheese souffle and an utterly sublime sirloin steak on the bone. We were also very impressed by our charming and chatty waitress’s recommendation of Fault Line Sauvignon Blanc, which we have been drinking happily at home since, too.

We left the next day after a splendid breakfast and a fine lunch of very good club sandwiches (with, naturally, another glass of Fault Line apiece), bound for Broadway’s near neighbour Chipping Campden and the Cotswold House Hotel. Unfortunately, the growing threat of the pandemic meant that we were rather more restricted in our entertainments in the most picturesque of small towns than we might have been otherwise, and it didn’t quite have the same immediacy of desirability that Broadway and the Lygon did. But, nonetheless, the Cotswold House Hotel is still one of the finest places to stay in the area, being a grand Georgian house in traditional Cotswold stone, and one arrives here feeling rather like a member of visiting royalty, thanks to the warmth of the greeting and the sophistication of the service. 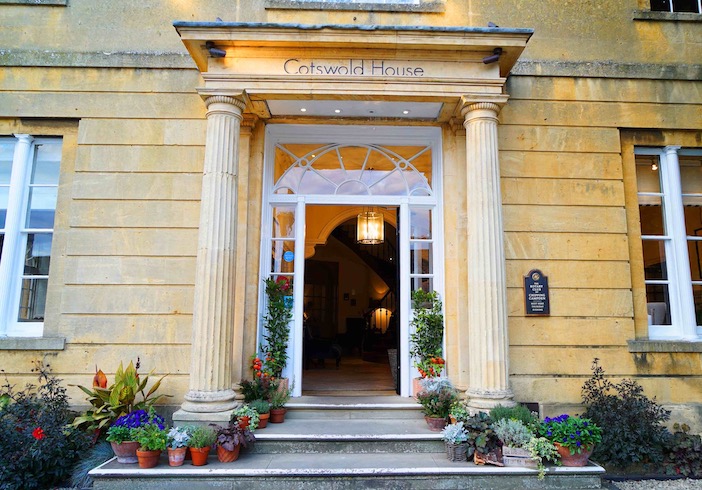 Our room, which overlooked the hotel grounds, was palatial, comfortable and an extremely lovely place in which to stay; the bed, especially, was one of the most luxurious that I could remember sinking into after a long day’s voyaging and travelling. Our daughter was especially taken with the cavernously deep bath, which she tried, and indeed succeeded, to get into on several occasions.

Alas, we didn’t make it to the hotel’s much-heralded spa, and, due to the rise of covid, we were unable to visit the much-acclaimed fine dining establishment Fig, which is, at the time of writing, closed and showing no signs of opening again any time in the future, so we were limited to a pleasant but largely unadventurous dinner of sausage and mash in the hotel’s casual dining restaurant, Bistro on the Square. 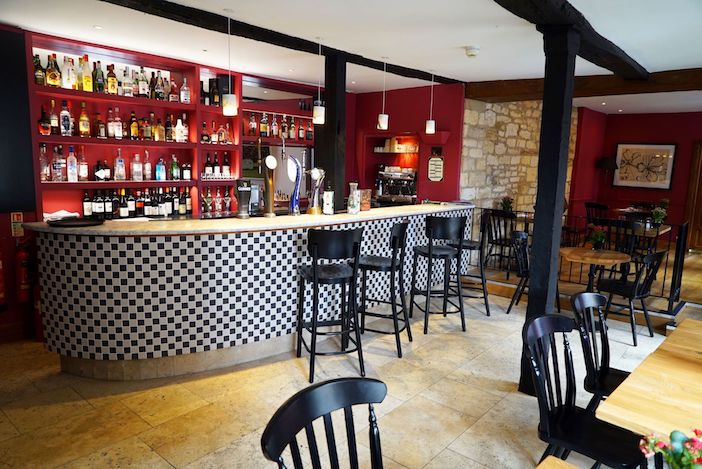 Nonetheless, even here, there were quirky and distinctive touches, such as the marvellous array of gins that one could pair with an even more comprehensive variety of tonics, and the whole experience was a very happy and satisfying one. It seems likely that, now that things are slowly returning to some semblance of normality, the hotel will undoubtedly soon regain its place as one of the Cotswolds’ premier places to stay.

And so, after several silent and empty months, the Lygon Arms and the Cotswold House now welcome visitors with open arms, and both deserve your custom, as does the entire Cotswolds. Go forth, spend money and enjoy yourself. Here endeth the lesson.

Rooms at Cotswold House start from £140 B&B winter, £180 B&B summer. For more information, including details of rooms, the Fig restaurant and Bistro, and the spa, please visit www.cotswoldhouse.com. Cotswold House Hotel is part of the Bespoke Hotels group. For more information, including details of other properties in the collection, visit www.bespokehotels.com.

For more information about the Lygon Arms Hotel, including details of spa days, ‘pawsome adventures’ and other offers, please visit www.lygonarmshotel.co.uk.