It takes around five minutes to transfer by taxi from Gibraltar’s airport to the luxury 5-star Sunborn Yacht Hotel, moored in the Ocean Village Marina. The narrow road entrance alongside the immense ship heightens the anticipation of what is to come.

Suddenly, the sounds of music and people, emanating from nearby cafes and bars and restaurants on the marina come into view at left, and to the front, the entrance to the 142-metre superyacht. The covered walkway eases the transition from the marina to the marble floors and vast sparkling chandelier of the Sunborn reception. A staff member offers new guests a tray of drinks at check-in and, once registered, two sets of lifts with floor-to-ceiling glass walls looking out to yachts in the marina, take guests to ultra-cool hotel rooms over six floors. Each has a spectacular view, either of the sea, or the marina, or the Rock; and a state-of-the-art touchscreen system that gives control of lighting, music, tv, temperature, even opening and closing the curtains. 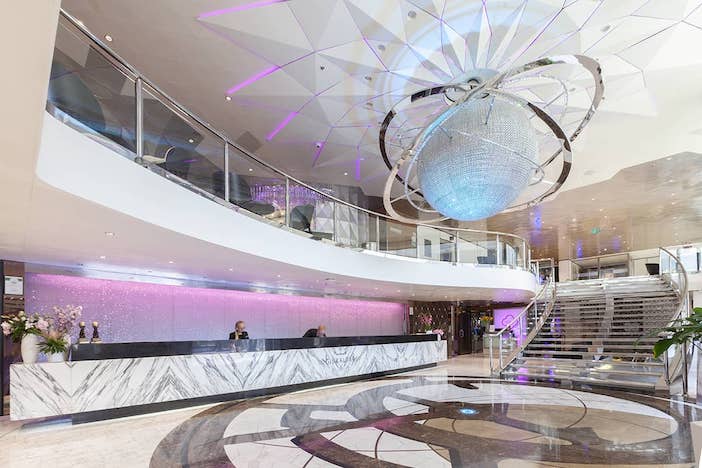 Launched in 2014, the Sunborn is a fascinating introduction to a static but floating luxury yacht. It was built in Malaysia and transported by sea to Gibraltar. It has 18,500 square metres of floor space with 189 guest rooms including suites. On the seventh floor – the top deck –  there is a spa, a sauna and a gym, with an infinity swimming pool on the sun deck. Guest room prices vary from around £200-£2,500 per night, from a Twin-Room with single beds, to the more luxurious Superior King Room with a balcony and sensational views over the marina. And ultimately, the SuperYacht Penthouse suites, on fourth, fifth and sixth decks, which have two bathrooms and extensive living spaces plus expansive private terraces with sunset panoramic views of the sea and marina. Dining on board is first-rate – breakfast has to be one of the best served on board a ship in the Mediterranean – and there are two restaurants.

What is unexpected about staying here is the feeling of space and privacy. This is not a commercial cruise liner. This is a place for people who want to experience a luxury yacht without 4,000 other passengers crowding the view. There are no queues or timed entry for breakfast here. The Sunborn hosts business meetings and conferences, catering weddings for 150-200 guests, and gala events that can entertain 400 people. These take place in the ballroom and meeting rooms on the lower ground levels away from guest accommodation. 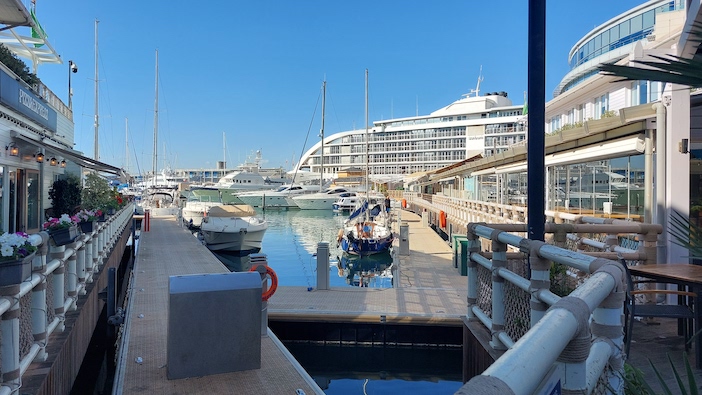 The Gibraltar super yacht-hotel, steered to success by COO Marc Skvorc, is the third to be launched by its Finnish owners, pioneers of the yacht-hotel concept. The first in 2003 was the floating Sunborn London, upgraded to a second-generation super yacht-hotel in 2014 with 138 guest rooms. It is moored on the River Thames, at Royal Victoria Dock, near the Excel centre. The success of this venture – in the City of London –  has led to a larger yacht planned to replace the current vessel. But the great advantage of the Gibraltar Sunborn, so successful as a hotel in this land-scarce city, is its location in the Mediterranean with a warm climate year-round – average temperatures for October-November are 21-24 C (70-75F) dipping towards 17-19 C (62-66 F) in winter months with July-August average 28C (82F).

The development of Gibraltar’s Ocean Village Marina and the creation of pedestrianised areas has produced new restaurants and eating places, and with it culinary tourists. Now a group of talented Gibraltarian chefs with their own establishments serve fabulous local dishes, unique to the peninsular. Try eating at The Chimney Tapas Bar to get a taste of what is happening here. Or at The Queen’s Picture House and Eatery filled with cinema memorabilia from the former Queen’s Picture House, and now a fine restaurant creating Gibraltarian specialities. 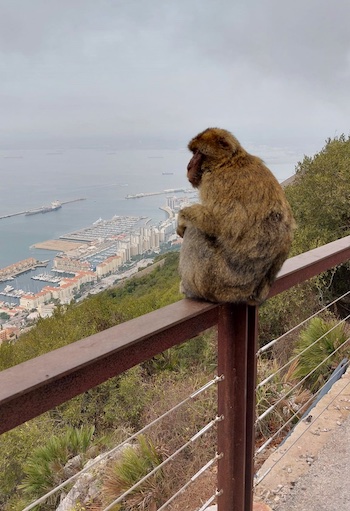 Gibraltar’s past status as a destination for cheap alcohol and cigarettes – there is no tax levy – has adapted to encourage health and wellbeing in varied activities. Companies offer deep-sea fishing, scuba diving, dolphin watching, and extreme sports. The Rock still has wild macaques living in the higher regions and added to this are spectacular sites like the glass-floor SkyWalk, 346 metres above sea level with 360 degree views of three countries and two continents. And the Windsor Suspension Bridge, 73 metres long suspended over a 50-metre deep gorge, a walk not for the faint-hearted but it gets people to explore every part of Gibraltar’s 7 sq. kilometres. There has been growth in cultural events in the arts and music too. This is the seventh year of the Gibunco Gibraltar International Literary Festival (25-27 November 2022), launched in 2016. Like Hay, Cheltenham and Edinburgh literary festivals, it gathers a diverse group of authors, to speak to and meet audiences to discuss latest work. The Sunborn Gibraltar provides the festival with its largest venue for events.

The lure of mainly retirees to the peninsular has changed. It now attracts younger generations for business and leisure trips. The ease of having the same currency, speaking the same language, and staying in a low-crime city are additives for Brits to visit. Many fly to Malaga, then cross the border from Spain to enter Gibraltar.

And when it is time to leave the luxury and refinement of the Sunborn Yacht Hotel (EasyJet and British Airways serve Gibraltar – plus private jets) perhaps take home the only thing actually produced on the peninsular, the hand-crafted premium gins from ‘Spirit of the Rock’ micro-distillery, sold in the duty-free shop at the airport.