Trending
You are at:Home»The Explorer»Spas»Spa of the Month: Hotel Elisabeth, Mayrhofen
By Anna Selby on January 23, 2023 Spas

You hear a lot these days about “forest bathing”. This doesn’t actually mean (as I first assumed) jumping into an icy pond in a mountain clearing. No, this is about being immersed in nature and allowing it to restore peace and calm to your fevered brow and chaotic life. I speak again from first hand. And, let me tell you, it works.

It’s possible to do this just about anywhere but one of the best places is surely the Austrian Tyrol. Not only do you have endless forest and breath-taking mountains, you have clear crystal air that comes as quite a shock to the system after city life. And, with the exception of March and April when you get the slushy melt in the mountains, it’s a year-round destination. Beautiful in the summer with endless hiking and biking trails, in the winter it’s permanently Christmas (certainly it looks that way). 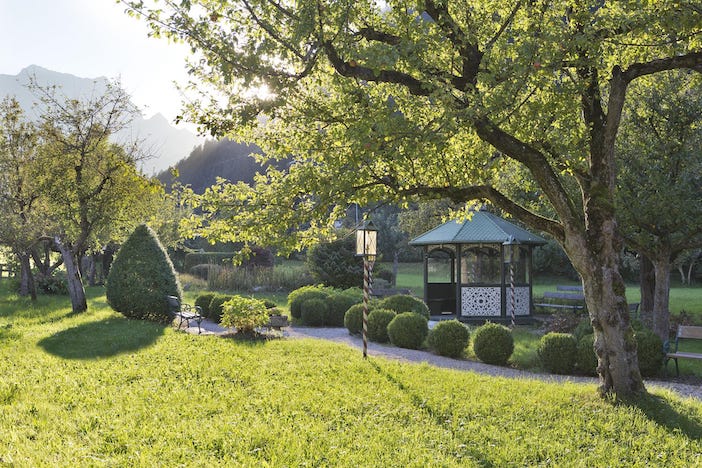 And this is arguably (definitely in my opinion), the country with the best spas in Europe. Now, Hotel Elisabeth may not mention “spa” in its name but, like many alpine Austrian hotels, it certainly has one. In this case it is vast, luxurious and has some remarkable treatments. So, I’m going to begin right there because one of the treatments I tried involved my favourite bit of spa apparatus and you don’t see it that often.

Apparatus? Sounds a bit clinical? Nothing could be further from the truth. This is a massage table that turns into a floatation tank where, wrapped in various waterproof layers, you are held by warm water in the most relaxed and natural shape your body can assume. If you like (and you probably will) you can move in order to create small waves until they and you settle. This will probably be repeated quite a few times because the sensation is quite wonderful. It’s a bit like being a kid – very playful – but what you don’t realise is at the same time it is profoundly relaxing because it is impossible for your body to hold any tension in this supported position. 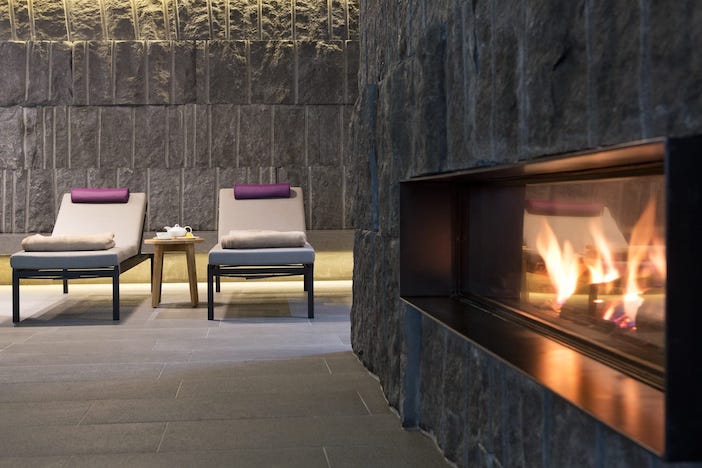 This was actually the central part of a long (one and a half hours) and rather lovely session described as a “Polynesian Whole-Body Treatment” and the South Pacific bits are in the products – you start with a body scrub of sea salt in oil scented with vanilla and you’re then coated in cacao butter. So definitely the scents of the South Seas then. But you could also argue that the floating in warm water (I’m thinking lagoons here) and the subsequent massage that concludes with some subtle wave-like movements is all part of it, too.

So you begin with that scrub (this also involves quite a bit of massage) and then you shower it all off before being completely coated in cacao butter and wrapped first in a plastic sheet and then a kind of rubber duvet – this sounds a lot stranger than it actually is. Then the therapist (in this case the lovely Caroline) presses a button and the table beneath you disappears and you are floating jetsam for a blissful 20 minutes. The only downside of this is when it finishes. You experience a real sense of loss as the table closes up again underneath you and it gets decidedly chilly once the various layers are removed. But then the massage begins (again with cacao butter) and Caroline does a great massage. Interestingly, this is one of the few massages I can remember when the therapist isn’t fighting the knots in my shoulders. Can being flotsam really remove all signs of physical stress? I wonder… 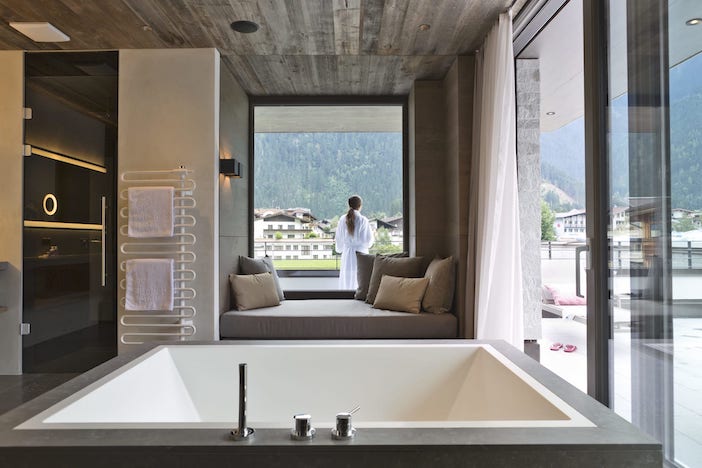 The spa menu here is very interesting. There is an emphasis on natural products (poultices, hay steaming, herbal compresses, pine sticks, marine mud and goat’s butter) and traditional therapies (cupping, Ayurveda, Hawaiian head massage) as well as the more conventional massages. One of their favoured brands is Thalgo which specialises in marine-based products using algae and the minerals found in the ocean (maritime calcium, magnesium, maritime silicon) and sea water itself.

This was the basis of my detox facial that combined maritime magnesium with spirulina and it started off pretty hi-tech with steam playing over my face (to open the pores and start the detox off) and a very bright light so that therapist Nadine could see what she was up against. We began with a cleansing milk, followed by toner and a spray with Thalgo’s Reviving Marine Mist before exfoliation and then the serious business of extraction. Those pores were well and truly open by now, thanks to the steam, and Nadine found every possible sign of blockage and removed it. This was positively painful at times (my poor nose!) but by the end there could be no question that my skin was as clear as it was ever going to get – and not just on the surface. 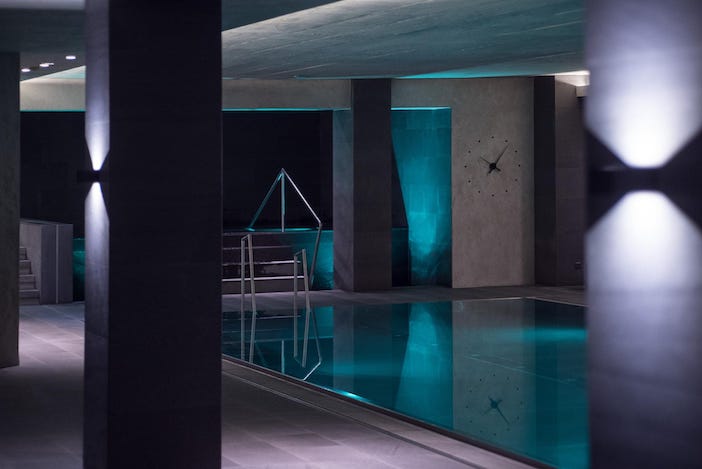 Nevertheless, Nadine followed this was a cleansing mask and while that was taking (it’s just for five minutes) she applies a mask to my hands, wraps them up in towels and tucks them in. And now we’re into the relaxing bit. Nadine turns down the lights and applies the Spirulina Boost serum and massages it in across the décolletage and shoulders first and then up into the face itself for a long stretch of pure relaxation. When this is removed and eye cream and moisturiser are applied, I think it’s all over. But no. This is just a precursor to the moisturising mask (not Thalgo this time but Ella Bache with added hyaluronic acid) but even this isn’t the end and Nadine applies a thick cold paste on top – a mask on a mask. I relax with all this for 20 minutes after which it’s peeled off in one go and, after a final layer of protective moisturiser, I’m off to the relaxation room for a bit of a lie down.

In fact, I also head off to the massive basalt pool where there’s a log fire (the Austrians really know how to make everything cosy), a vast Jacuzzi and a sauna and steam room. There is another area with an aroma-steam bath, bio-sauna, Finnish sauna, infrared cabin and cold mist showers that opens in the late afternoon. And, this being Austria, it’s aka the nude sauna area. You might want to cover yourself in a towel here if you’re feeling particularly British but, believe me, the Austrians won’t. 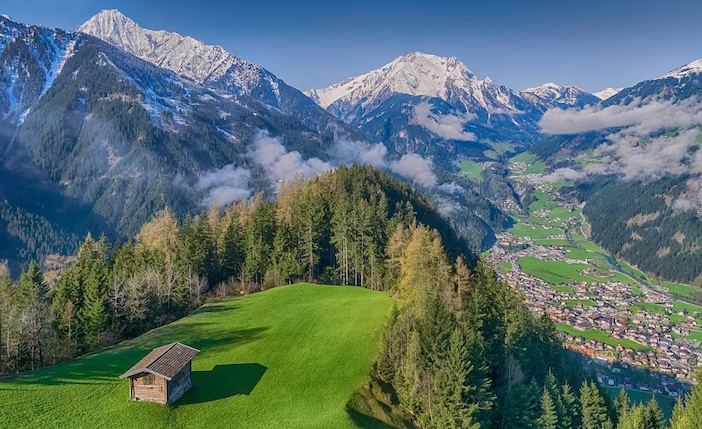 The Hotel Elisabeth is in the middle of Mayrhofen which is a delightful Tyrolean town and gives you access to 544km of perfectly groomed pistes all through the winter so this is the perfect place to stay for skiers and snowboarders. It’s adults only so when you are in the spa, it’s as peaceful as you like, and the food is definitely tailored to grown-up tastes with a considerable wine cellar and gourmet dining every night.

The food, though, is also very local (the Moigg family who own the hotel also have a farm) and extremely healthy being light and easy to digest. So, while the spa doesn’t have specific programmes (for detox, say, or weight loss), they do have a spa version of the menu so you can incorporate that and they will help you make a programme of your own. There is a gym and the occasional class but why would you? The mountains are just there waiting…