It’s just after dusk that Luang Prabang, a town in Northern Laos and longtime royal capital of this small country, really comes into its own.

In the daytime, smoke drifts down into the river valley town from the farmers’ fields where they are doing the annual burning of their land to revitalise it before the winter, leaving a smoggy, claustrophobic intensity in the air.

But as the sun sets and the valley cools, the winds pick up, the smoke drifts away from the shimmering Mekong and Nam Khan rivers which surround it, and the myriad fairy lights that dot the sweet streets begin to flick on, bringing a magic to this ancient place. Little boutique shops and terraced bars line the streets, which are also dotted with dozens of temples lit up most magnificently at night. “I love it here,” I declare on our first night, as we wander around getting a feel for the place.

March is not the most opportune time to visit – it’s far brighter and fresher in the peak season of November to February when this writer would suggest visiting. But it’s also a place I’ve wanted to visit, even for a few days, for such a long time. 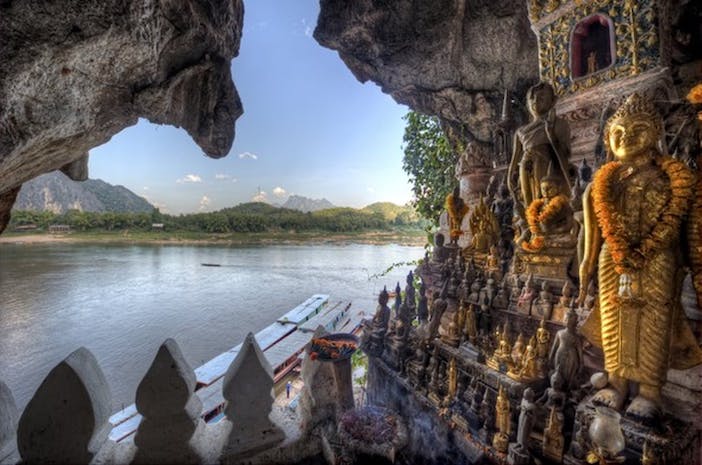 Unlike the tourist meccas of Thailand, Cambodia and Vietnam, Laos is less well known on the travel scene. Even my most well-travelled Southeast Asian loving friends have rarely ventured here or can give me a heads up of what to see and do in this country. But that also makes it irresistible to anyone who loves exploring.

Our home for the four days is the quaint, riverside The Belle Rive boutique hotel, a spot that immediately brings to mind long gone languid afternoons peppered with G&T imbibing under large umbrellas alongside a spot of whist. Its two-storey white walled frontage with royal blue window shutters on one side, and teak balconies on the entrance building next door make it stand out along the riverfront. Its famed in the city for providing the warmest welcome to guests who pitch up on its doorstep and we immediately feel that as we wander up with heavy bags in hand.

Our room features a delightful teak four-poster bed, draped with mosquito netting, and large windows looking out to the riverside across the road. There’s a beautiful writing desk and part of me imagines moving into a place like this in the 1920s, spending my days writing a book, and my evenings drinking until too late. 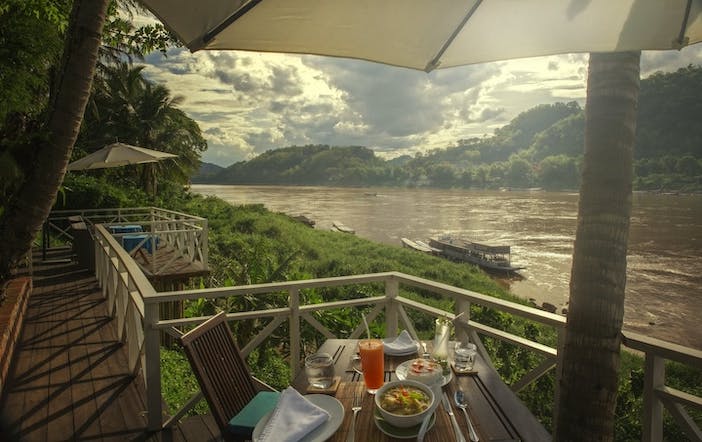 It’s hot, sticky, humid and smoky, but the team are never far away with cold refreshing towels, bottles of filtered water (to save on bottled water pollution) or a friendly chat. It’s the riverside terrace, though, where we spend most of our time – sitting and enjoying a late breakfast (the hotel’s policy of allowing guests to eat their included breakfast at any time they want is something I wish all fine establishments would introduce), or a pre-dinner cocktail is made more delightful by the warm and kind-eyed team who are eager to assist, especially due to the fact there are far fewer guests than in normal times.

Weeks later, in the height of the crisis, we would receive an email update from the hotel’s co-owner and GM, Damian Killer, who informs us that after Laos declared a total lockdown on the 19th March (just two days after we departed), they ended up assisting numerous guests to get repatriated, while also keeping on their staff rather than making them leave because there was no work. “They are family and they appreciate our support now equally as much as we did appreciate their passion and hard work during the last 10 years of operation,” he wrote in the email. Instead, they worked together to sell vegetables from their organic gardens at the local market, and offered their laundry service to outside clients to bring in some income. It was not only heartening to hear, but another example of the human capacity to provide kindness when it’s most needed. 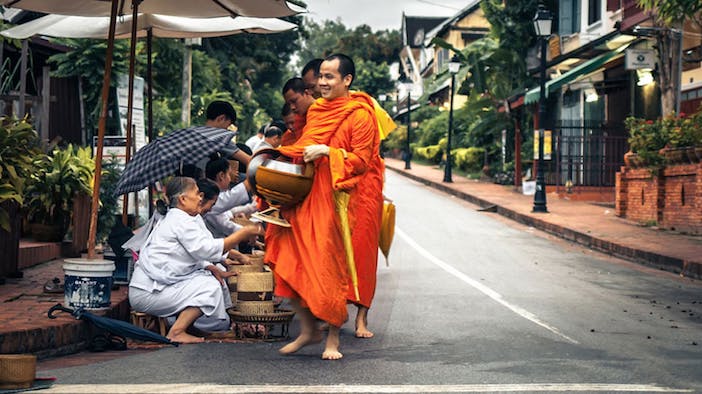 The hotel offers its guests free bicycles and, with the heat, this becomes one our favourite parts – whisking our way through the town’s quiet streets, watching temple after temple fly by as my feet peddle away will leave a lasting impression on my heart. In fact, four days later when we are due to book our flights out of Laos, I find myself so in love with the town that I throw caution to the wind and, while cycling past the city’s beautiful sights, yell to H that I want to stay just one more day. I know it will never be enough, but I convince us both that 24 hours more will at least make us feel like it’s easier to let go.

By complete chance, one of H’s old friends from the UK, Andrew, has now settled in Luang Prabang with his Laotian wife, setting up a beautiful bar called The Spirit House. One evening we gather with his friends and a number of expats – some of whom work for an anti-animal trafficking agency, making for very interesting conversation – for drinks in a local biker bar, run by one of the most badass women I’ve ever laid eyes on. 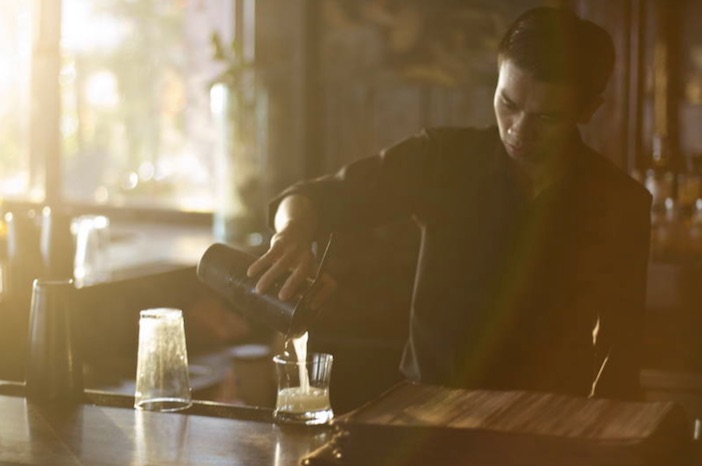 We talk of their fears that the country will soon shut down, what the impact will be on the hospitality world there, of how they each arrived in the country ‘while travelling for a few months’ but how some of them have made it their homes for over 20 years. ‘There’s a pull in Laos, there’s just something about it that keeps drawing you back in,’ says one friend of Andrew’s.

After far too many negronis, we wobble our way two streets back to the hotel on our bicycles, past the intricately painted, glowing red and gold temples, convinced by everyone at the gathering that if all else fails and we get trapped in Laos, it wouldn’t actually be all that bad. We imagine days of heading out of the town on the crazily winding roads, and afternoons meandering along the river on a boat – it all sounds thoroughly appealing, if not for the fact our travel insurance would not exactly hold up if we chose to stay rather than being genuinely stuck. 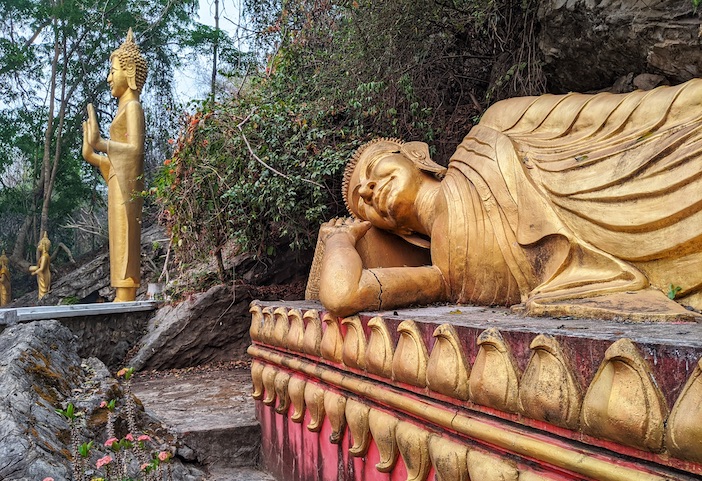 Before sunrise one morning we climb to the top of Mount Phousi in the old town, making our way past the young monks preparing for the day ahead, and wandering through old forests harbouring dozens of Buddah statues hidden amongst the alcoves and rocky terrain. It’s so quiet and peaceful, I feel I could stay for hours looking at the city waking up for the day below, but the morning market beckons and we race down the hillside to make it before it closes.

The market is one of the most beautiful and colourful I’ve ever come across on my travels, the women dressed so elegantly as they squat comfortably before their produce, the Laotian chatter and, no doubt, morning gossip dancing past our ears as we take photos of the piles of gleaming red chillies, teeny purple, white and green aubergines, and huge skinned water rats, of which they are fond. We eat rolls of hot Laotian blood sausage fresh off the grill, and slurp our way through an herbal, spicy flat noodle soup that aches of goodness. 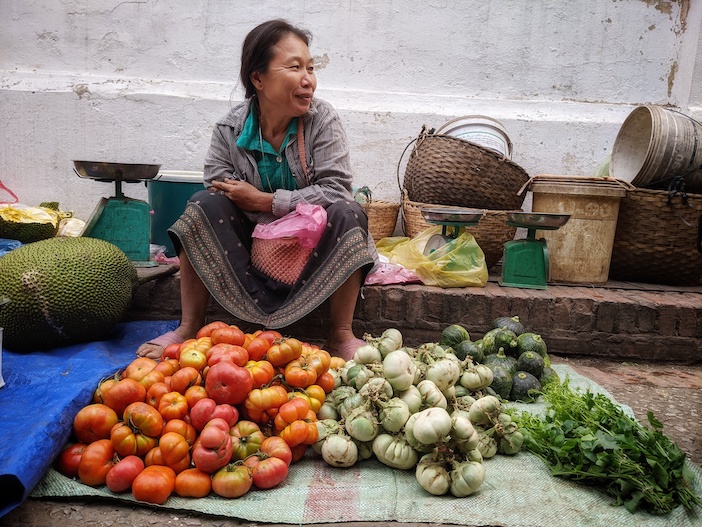 I watch as the many friendly smiles radiate around us. It’s hard to imagine that this small country has the unfortunate tag of being the most bombed in history – from the mid-1960s to the mid-1970s, the US fought what’s known as a ‘secret war’ here, attempting to unearth Communist fighters from Vietnam, and arming locals, despite being officially neutral. More bombs were dropped on Laos by US fighters than throughout all of World War II, and yet you rarely hear of its damaged history. The kindness, therefore, carries even more weight and leaves a truly lasting impression.

One afternoon we hire a driver to take us to the local organic buffalo farm, where we learn of a programme that helps farmers to better manage their livestock, encouraging them to keep healthy cows to breed rather than just trying to sell them for the best price. The programme rents the healthy buffalos from the farmers to use the milk to make cheese and ice cream, bringing a sustainable faming ethic to the community and gaining greater income for the farmers – a big boon in a country where many farmers live a subsistence life. 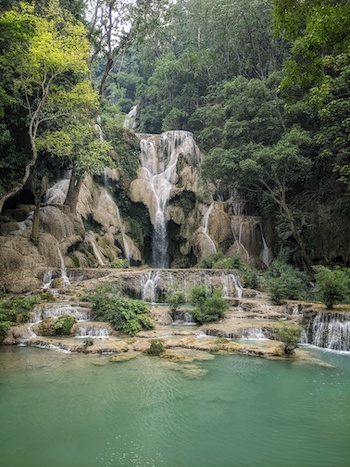 We travel on to the famous Kung Si Waterfalls, the perfect escape on a muggy summer’s afternoon, with abundant shade and fresh, icy cold waterfall pools to bathe in. It was an outing we almost missed as reviews had said it gets so crowded due to their beauty, you can barely see the falls, let alone swim; we find ourselves almost alone, this ‘new normal’ providing us with the chance to see touristy places in a totally different light. While swimming we get chatting to two gents visiting from Scotland, and all of our discussions revolve around the uncertainty of what’s happening in the world, with one of them saying his girlfriend was currently stuck in the Philippines unable to get out, while they’d just left Vietnam as it was shutting its borders. In some ways, it’s like we’re all on the run, while simultaneously trying to focus on our thanks for the chance to still keep exploring safely for another day.

At night, we eat in the local street food market, the ladies so excited by our clear joy of choosing random curries that they keep showing up to our table with more bowls of food, just to see our reactions to what they’re cooking. Cats watch us expectantly, hopeful of a few scraps floating their way, and we wince as our mouths are burned by addictive coconut cream filled pancakes called Kanom Krok.

On our last evening, we’re followed home by a young German Shepherd puppy, who insists on sitting with us on the stoop while we take in the last moments in the town. Just like in Chiang Mai, I find myself calmed by this being – as if all dogs have an internalised meditative energy over here. I promise myself I won’t cry when we leave Laos. I’ve only been on its soil for five days, after all. But it’s as if I completely understand where the expats were coming from when they said there’s a certain allure that makes you want to leave normal life behind in favour of starting again in this magical, peaceful land.

When our plane actually takes off the next day, bound for Cambodia, it’s as if I know in my heart I’ll be back. If only to have one last late breakfast on the terrace of The Belle Rive and watch the world drift slowly by along the meandering Mekong.