Trending
You are at:Home»The Explorer»Travel»Dubrovnik: The Pearl of the Adriatic
By Noah May on October 15, 2014 Travel

Sheer slopes of time-worn granite and basalt, offer a terrifying descent into waters of perfect, unadulterated aquamarine. Above the impermeable, unassailable rock, stand trees: cypress, pine and olive. Some trees stand proud, noble and erect, others cling, on precarious, death-defying angles, holding to the rock for dear life. The Adriatic waves crash and foam over ancient stone and the summer sun beats down, oblivious to all things.

Dubrovnik – The Pearl of The Adriatic according to Lord Byron; a dramatic, rocky fortress outpost on the prettiest stretch of the Dalmatian coast. The city is awarded UNESCO World Heritage Site status as one of the most beautiful and unique cities on the Mediterranean coast. The medieval walls were built thick to protect the city from hostile forces, although the bitter wars of the 1990s brought aggression that not even these walls could withstand and the ancient city suffered damage from shells and mortars. You would never realise this, wandering the sand stone, toffee colour streets at dusk. The re-building of this ancient wonder was so carefully managed that there are few signs of these dark days at the end of the last century. 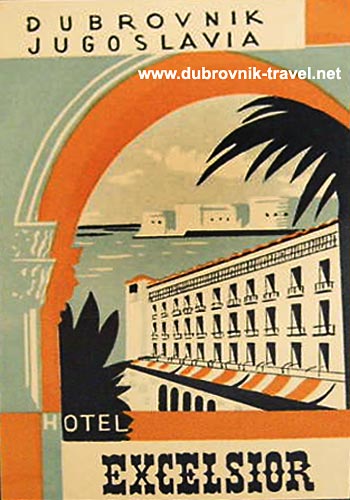 Dubrovnik has been a popular destination for tourism since the turn of the 20th century. It was a preferred destination for the English upper classes who were drawn to its natural beauty, to its history and the elegant hotels which luxuriated here in the grand European style. This coastline has the dramatic beauty of the Amalfi or Calabrian coasts of Italy, but with added eastern promise.

One of the great hotels that would have drawn in the most illustrious travellers was and still is, The Hotel Excelsior. The Hotel Excelsior first opened its doors in 1913, a year before the start of the Great War. Ever since these far-bygone days, the hotel has been the first choice of politicians, diplomats and the stars of the stage and silver screen whilst journeying to the Adriatic. Agatha Christie’s was said to be a champion of this elegant bolt-hole. Where else in the region could have played host to the likes of The Queen, Elizabeth Taylor or Margaret Thatcher, who could often be found, whisky in hand, on the terrace. Richard Burton would stay here if travelling in Balkans, along with Onassis, Princess Margaret and the von Habsburg family. Evocative portraits of characters that speak of other eras line the walls of the hotel and provide inspiration for the 21st century traveller.

We arrive in the heat of July. The taxi moves at speed down the coast from the airport, before finally rolling into the old town and up the hill to The Excelsior. Dubrovnik is busy. These days tourism is the number one industry in the region, so long summer days mean huge ocean-going liners docking into town, delivering hordes of visitors for whom Dubrovnik is just one stop along the Mediterranean sight seeing tour. Thankfully we sidestep the throng that’s clogging up the Old Town and make it to the santuary of our hotel. The Excelsior went through a major re-development before re-opening in 2008, so there is a palpable sheen to all that is new, but pleasingly the management have succeeded in maintaining the carefully developed old-world charm; the design might be cutting edge, but the service, attention to detail and general atmosphere still speaks of a time where men wore sports jackets to dinner, sometimes hats in the street. 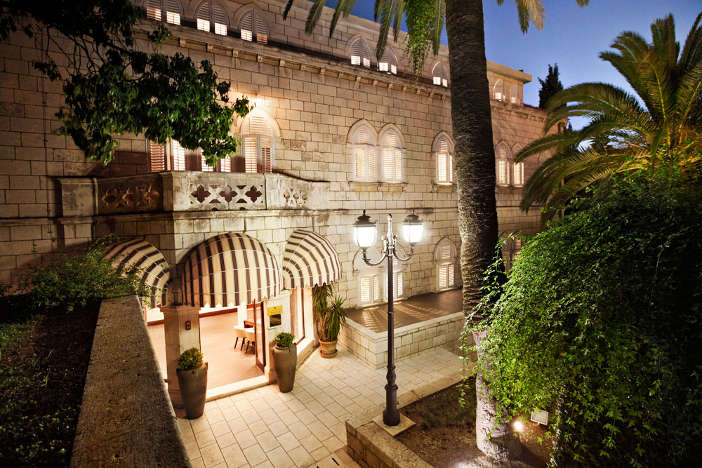 Our suite covers a corner on the top floor of the hotel. All of the room’s features are exquisite, this comes as no surprise, it’s the view that’s remarkable, it takes my breath away. Here from our private look out, the whole of this ancient fortress town, spreads out along the horizon, the blue of the Adriatic, vying with the setting sun for attention.

Come evening we dine, not at The Excelsior, but a moment’s walk away at Villa Orsula, the elegant sister hotel on the hill. From our hotel, Villa Orsula looks like a kind of Bond Villain’s lair, partially obscured from view, behind cypress trees and the rocky cliff face. Villa Orsula was built in 1939, but restored to extraordinary effect and re-opened in 2012 as Dubrovnik’s most luxurious boutique hotel. The hotel, which has only eleven rooms and two suites is a haven, a place to hide away, comprehensively obscured from the stresses of modernity. The best time to find yourself at the hotel is at dusk, as the sun droops and then falls, first over the island of Lokrum and them eventually over the walls of the old Old Town. We drink perfectly made Manhattans on the terrace, before settling in to dinner. 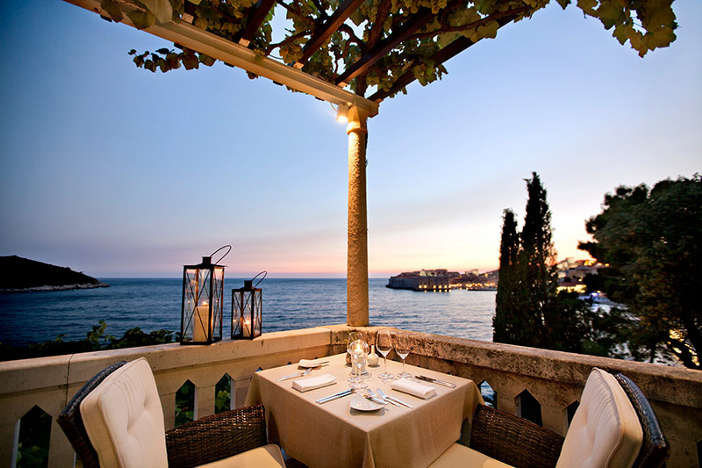 The menu is a celebration of various European culinary forms, that draws on Italy as it’s most active inspiration. Plavac Mali, the powerful, famous wine of the Istrian coastline, similar in form to Zinfandel, is decanted at table. The wine is deep, purple black and tannic in youth. The wine welcomes the fresh night air to allow it to blossom and come alive. We feast on racks of lamb; carefully cooked and presented with creative flourish. Executive chef, Thierry Caruel, a French national who’s origins are in Champagne and who cooked at the wedding of Prince William and Kate Middleton, cooks classical French dishes which make the most of the fecund landscape to create a menu which celebrates the region, whilst offering various international flourishes. The evening ends on a high note with well-proportioned Fernet Brancas, the perfect final punctuation to a dinner of this nature.

We return to room in a dreamlike state, the lights of the old town of Dubrovnik glowing in the middle-distance. On the terrace, the wind is up and the fragrant, summer air blows in. Sitting here one can see with utmost clarity the vision that Byron was inspired by; the craggy coastline, the pre-historic rock formations and man’s ancient fortifications, there is a wild, yet subtle beauty here that endures.