The cab driver is tall, Indian and at first extremely taciturn; that is until I tell him I’m honeymooning in Mumbai in a month’s time. This piece of news delights him and soon he’s sharing information and stories as his bright yellow cab hurtles through Queens from JFK, approaching the bright lights of the town that never sleeps. In the half light of an April evening, as we approach The Brooklyn Bridge at speed, I am reminded of a poignant reading of Nora Ephron’s list of what she’d miss, written very shortly before she passed away. Alongside ‘bacon’, ‘waffles’ and ‘the concept of waffles’ was ‘coming over the bridge to Manhattan’. Here it is rearing up at me; in an instant I see exactly what she meant: once savoured, this is a view that nobody would want to wave goodbye to with any finality.

Manhattan is magnificently, overtly and unmistakably Manhattan. As soon as you see the shining peaks of the iconic skyscrapers – The Chrysler Building and the Empire State, as soon even as you see the yellow taxis, there is no possible chance you could be confused as to where you are. Approaching Manhattan is the beginning of a Woody Allen film, a John Cheever story and Mad Men all rolled into one big dream of what a city should be – it is a the ultimate cinematic urban space. 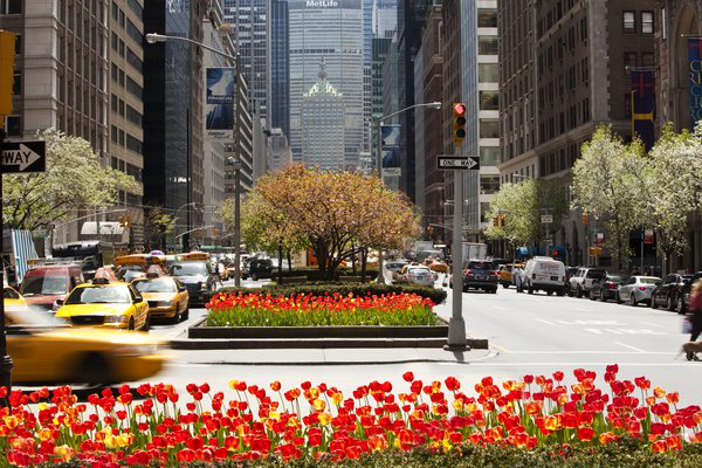 Our car swerves and jolts through Gotham’s dark streets; there is much beeping of horns, many sharp stops and starts. New York cabbies don’t mess around; they are aggressors, but then so is everyone – everyone has somewhere they need to be. We enter the island at its southern tip, and make our way north through the sparking, wet streets.

The Loews Regency is at 540 Park Avenue. The hotel is a classic, old New York establishment, but the management have recently invested a couple of hundred million dollars in a spectacular refurbishment, so the hotel that greets me has a palpable, shimmering newness that feels like a treat.

It’s late, and I’m hungry, so as soon as check-in is arranged, I slide through to The Regency Grill to enjoy a late supper before the kitchen closes its doors. The maître ‘d is pleasingly French and a consummate pro, so there’s only a matter of minutes before a Manhattan you could bathe in arrives at table. Bourbon sinking into my bones, I survey the menu. The Regency Grill is a smart take on the classic New York grill restaurant; the menu focuses on shellfish and parts of the cow that respond well to the action of hot coals. I’d intended to go for a light snack, but the mixture of a strong drink and jet lag provokes gustatory recklessness rather than slumber, so I dive into the New York night and order a lump crab cocktail and half pound burger, whilst reaching gleefully toward the wine list. 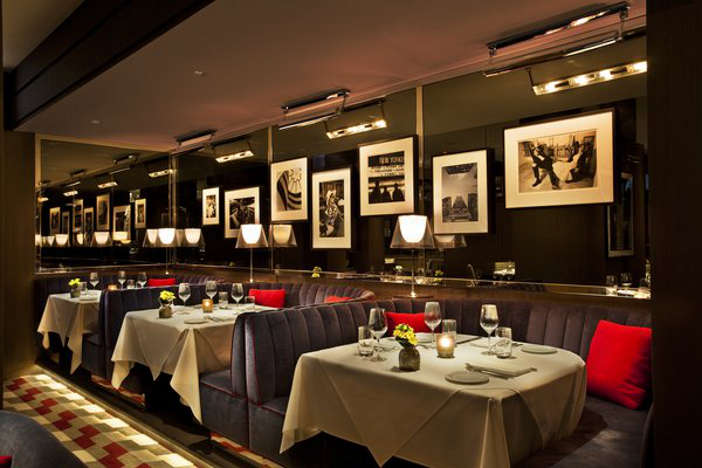 The bar behind me is packed and the staff – big guys with wide smiles – are generous of portions and spirit. It’s not long before I am enjoying a gargantuan plate of crab and sharing travelling tales with the waiter. Then a burger arrives, triumphant in form. There’s nothing complicated, nothing avant-garde about the patty – merely a solid half pound of ground USDA steak, a fine bun, good French mustard and a slick of ketchup. The maître ‘d furnishes me with a glass of Merlot which has been made from grapes grown on Long Island, but which tastes as if it could have come from the clay soils of Pomerol, so silkily delicious is it. By this stage, I am flying – I’m not sure if it’s the Manhattans, the choice ground beef, the smiles everyone’s treated me to, or my sheer exhaustion, but I feel as if I’m in a dream, a happy languid dream. I decide it must be time to turn in.

My room, on the 11th floor, isn’t merely large, it is a room that you could risk getting lost in. The design is contemporary, but there is a strong sense of the classic. There is no mistaking that this is an elegant, mid-town hotel: the linen is thick and luxurious, every bed clad in sheets from Frette – the great Milanese linen company. The hotel’s 379 rooms fan out around the solid structure of the hotel, each room with commanding views, either of 61st Street or Park Avenue itself. With its size and generous amenities (sink, fridge and storage space) alongside an elegant working area and ergonomic chairs, my room has the feel of an extraordinarily luxuriant apartment. I look out my window as late night becomes early morning, and see the edge of the park in the distance. 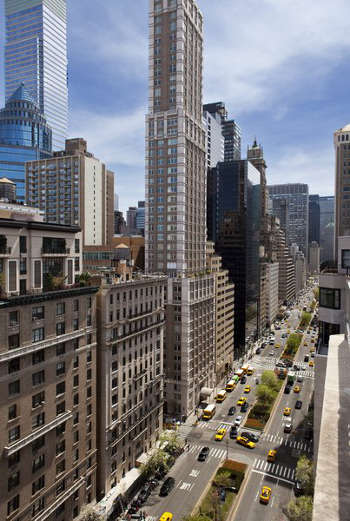 My jet lag wakes me at 6.15am. There is the merest suggestion of grogginess; the Manhattans, wine and burger do not seem like too long ago, so I decide to leave the luxury of my Italian cotton den and head out into the perfect clarity of this fresh New York morning. The Loews Regency inhabits a great position, so I grab an early coffee from the breakfast hall and stride forth to find the greenery of the park I’d but glimpsed in the moonlight, hours before. I cross over onto Madison Avenue and I’m met by the most serendipitously perfect New York street-scene, a drain cover has, for reasons unknown to me, been prised off and steam from the subterranean bowels of the city billows forth into the street, workmen shout and stamp and runners pass me, heading to the same greenery I’m focused on – everything feels overwhelmingly perfect.

The New York Viceroy is, geographically at least, not far from The Loews Regency, but this new hotel’s ethos and aesthetics find inspiration from other parts of Manhattan – it has a downtown edge. The Viceroy is to be found at 120 West 57th Street and if you view the hotel from the street you see it rearing up from the side walk in vertiginous, urbane splendour.

The 29 floor hotel is a newcomer, opening in 2013, but the aesthetic of the hotel suggests it may have come from another era altogether. There is something of old New York about this hotel, a sense of tradition and a celebration of the past; a very specific past, the past of this city. Roman & Williams, the architects given the task of re-designing the hotel, have form; they were involved in the design of both The Standard Highline and Ace Hotel, New York. Their strategy at The Viceroy has clearly been to create a detailed and faithful representation of the city’s most compelling qualities. Whether it be the flooring in the restaurant, which evokes a Grand Central Station of old, or the walnut and leather sofas, every detail speaks of thought.

My room is once again on the 11th floor and is pleasing in the extreme. It has not quite the proportions of my room at The Loews Regency, but what it lacks in expansiveness it makes up for in charm and detailed luxury. The room is masculine, but in a gently assertive, rather than aggressive, manner. There is lightly varnished wood, leather and all manner of gadgetry. The bathrooms are particularly exquisite. A mosaic floor meets a deep, thick enamelled basin and vaguely industrial, handsome matte brass taps. I take a long shower before committing to lunch – I need to feel refreshed. 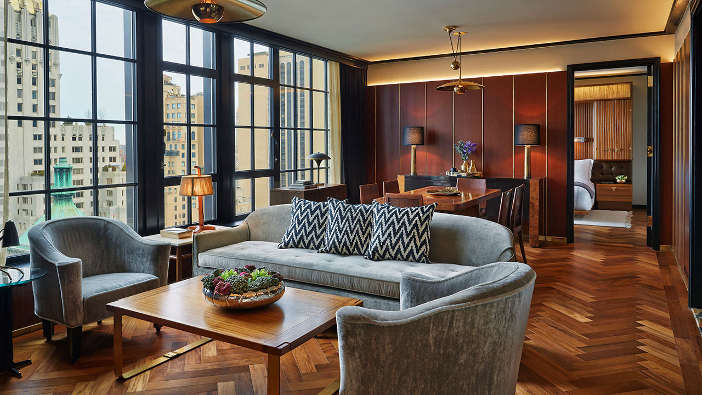 The restaurant, Kingside, is on the ground floor. This is an all-day dining room where elegantly composed, classic American dishes can be enjoyed from sunrise to way after sunset. I make it down in the late morning, so as to enjoy a New Yorker’s brunch of Eggs Benedict, sourdough toast and excellent coffee. Also as a nod toward all the joggers I’ve seen out on my travels, I take a juice from the bar which comes in a deep, murky shade of green: kale, ginger, parsley and lime. This is the great thing about this city: whatever your tastes, be them gin-based or gym-based, the product is always the best it could possibly be.

I have limited time in the city, my trip is frustratingly short, and having been reliably informed that this is the sunniest, brightest Sunday the city has known in many months, I decide to take in a monument. The Empire State Building is, of course, New York’s tallest and arguably most iconic spot. The problem is when you’re up it, you can’t see it. With this in mind, I decide to visit the viewing platform at the summit of The Rockefeller Centre – Top of The Rock.

There may be bigger cities than New York; there may be older and newer and richer and taller cities, but there is simply nowhere this iconic and nowhere with a view like this. Sixty-seven floors up and New York sprawls out below in all its glory. From this rarefied angle, you simply feel as if you are on top of the world, the centre of the universe. I think there is something in its enduring solidity, the fact that these skyscrapers have seen out much of the 20th century and more. There is a great sense of the power of American industry and the birth of the modern metropolis. 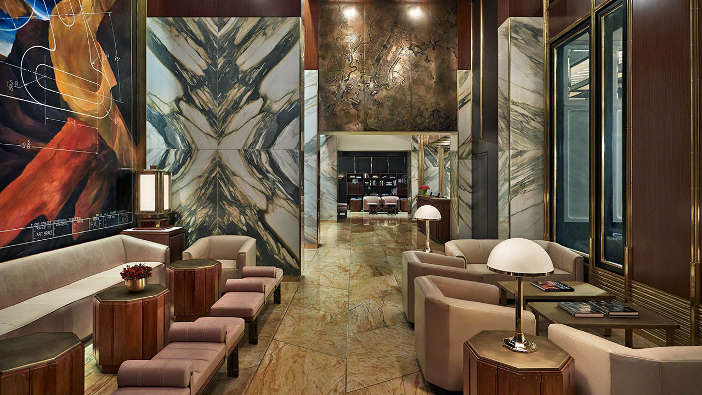 Later, I move up to The Roof, The Viceroy’s bar and surely one of New York’s best new hangouts. The bar in on the 20th floor of the hotel, and is open only in the evening. The view is unique: due to The Viceroy’s position just south of the park, the vista from the The Roof takes in most of Central Park’s verdant glory at close quarters. The crowd is a mixed cross section of New Yorkers: hipsters, bankers and travelling, transient loners like me prop up the bar. I order an Old Fashioned and take in the scene, which seems as particularly ‘Manhattan’ as one could hope for.

I make my way to Grand Central Station, a sombre man, melancholy to be leaving this invigorating city so soon after arriving. Grand Central is another monument that mocks its cousins across the Atlantic in terms of size and ambition; it makes London Victoria or Liverpool Street Station look small and ugly. The best thing about Grand Central, after the people perhaps, is The Oyster Bar on the lower concourse. This is a real old New York institution, a place where you can bump into all manner of character, all passing through, all on the move. I take my place at the bar and order a beer and a Bloody Mary shooter (a strange concoction of ice cold vodka, tomato juice, Tabasco and a raw oyster – not for the faint-hearted). I follow with a dozen Maine rocks – small, but flavourful little bivalves – and watch the room. All around there are lovers, loners, workers and loafers, a lovely assortment of faces to see me on my way.

New York, New York, so good they named it twice.