Trending
You are at:Home»The Explorer»Travel»Shades of Alentejo
By Shana Ting Lipton on August 17, 2013 Travel

Fifteenth century legend has it that the Virgin Mary appeared above a thorn bush at a special spot on the outskirts of Evora in Portugal. As a result, the beatific site drew hoards of devotees. And, to honour this, in 1458 a church and monastery were built.

Today, the setting of Nossa Senhora’s (‘our lady’) mystical cameo is part of the 5-star Convento do Espinheiro hotel and spa. Its centrepiece chapel brings its ecclesiastical history to life through moralistic lessons embedded in blue and white-tiled religious scenes, and the divine opulence of gold-accented pulpits. 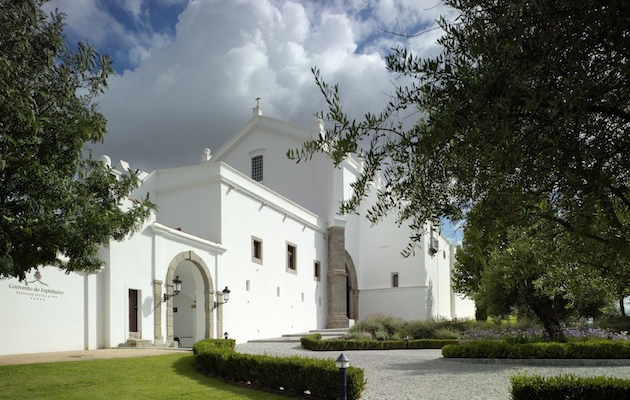 Yet, beyond such ascetic antiquities, on the other side of the land, the hotel’s new wing emphasises the luxurious leanings of a more secular order: Starwood, which partnered with the owners of the property to open the hotel in 2005.

South Central Portugal’s Alentejo area — of which Évora is the capital — is rife with such unexpected dichotomies. To the inquisitive and observant visitor, the underlying spirit of the country’s bread basket region reveals itself by-and-by, slowly but surely illuminating the enticing fact that, here, nothing is as it seems.

It doesn’t take long to learn that the chief industry in the Alentejo is cork; the locals are quick to proclaim this fact. About 60 miles from the capital, cork trees and the occasional cow herd swoosh by on a drive through Grândola — the subject of a Salazar-era revolutionary song, ‘Grândola, Vila Morena’, which doubles as a celebratory tune for birthdays and such. The anthem conjures up images of sun-bronzed teams of labourers — pickaxes in hand — scaling off the valuable ochre-red layer of a cork tree.

Such is the scene at one cultivation site in the area. Once cut and gathered, the raw material— a favourite with eco-fashionistas — will be artfully transformed into everything from stylish purses, wallets, hats and ties to luxury cork umbrellas (selling for circa €50 at cost). So diverse and ample are the local offerings that it is in fact easy to go a bit cork-wild. 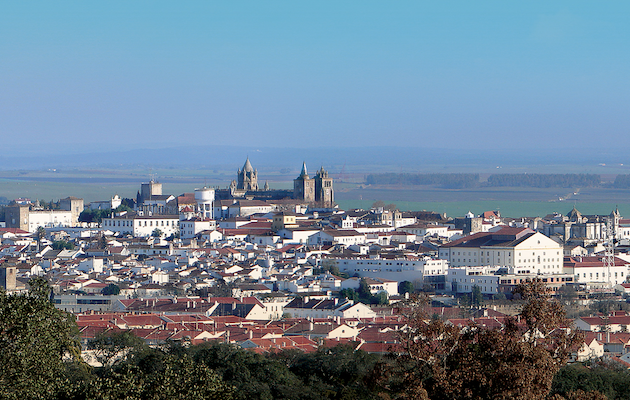 Just a bumpy, craggy-mountainous SUV-ride away from the cork cultivating site, the popular material punctuates a banquet table, in the form of the traditional wine bottle stoppers. This is the scene at the nearby Herdade das Barradas da Serra, located at the foot of the Grândola Hills. The 1,977-acre working family farm is also a ten-room pousada. There, al fresco on the communal patio, overnight guests can enjoy the spoils of the good life: a glass of aromatic Venâncio Costa Lima Moscatel, along with delicious sheep’s milk cheese and cured hams.

Roughly 18 miles north in Alcácer do Sal, a town in the estuary of the Sado river, an even more elaborate feast awaits although — in typical Alentejo fashion — in an unexpected location: an old school on arid land. This abandoned-looking structure is the home of A Escola, a restaurant that has attracted the likes of former French President Nicolas Sarkozy.

Lording over its country kitchen, Chef Henrique Lopes. Although he looks the part, this small, elderly gentleman with kind eyes explains that he was never schooled in cooking; Lopes explains that he comes to this mama-papa eatery from the world of PR. The inspiration for his heartfelt creations — family recipes from the Alentejo coastal region — is appropriately homely. “In my veins, I don’t have blood; I have the river,” he proclaims.

Lopes’ culinary staples include the rustic comfort dish of Acordas (traditional Portuguese bread soup) with choices of eel, shrimp or shellfish. Crock pots brimming with rice, tomato soup and fresh herbs dominate the table. And then there are the rich and sinfully tasty sweets loaded with sugar and obscene amounts of eggs: morgado de amendoa/figo (almond/fig cake), and tarte de pinhao (pine nut tart), to which Lopes regally gestures — his pièce de resistance. 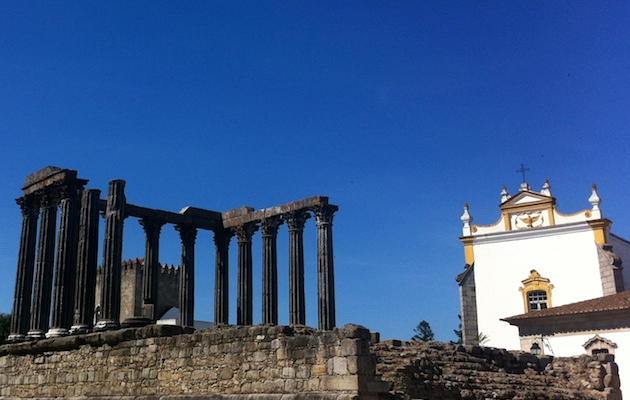 Alcácer do Sal — one of the oldest cities in Europe — was founded before 1000 BC by the Phoenicians. Its architectural style dates back to the height of its importance as an agricultural centre during the Moorish rule between the eighth and 12th centuries. However, the Alentejo Moorish connection is perhaps most dramatically illustrated by the entrance to the fortified city of Évora. Inside, the historic centre of the UNESCO World Heritage city is anchored by the towering ruins of second century Roman Corinthian columns.

Despite this mainstream stamp of approval, within the city walls a far more underground (literally) display spooks and mesmerises visitors: A Capela dos Ossos (‘chapel of the bones’) in the church of São Francisco. Built by three 16th century monks — perhaps with OCD or sociopathic tendencies — it consists of the macabre remains of 5,000 Franciscan monks, set in cement, complete with cringe-worthy skull heads. The creators’ intention: to prove that, in the end, all humans are the same. Were it not for the plexiglass partitions that veil the display in the spirit of a Disneyland ride, one could easily be haunted for days by the bare sight of this morbid and meticulously assembled place of worship. 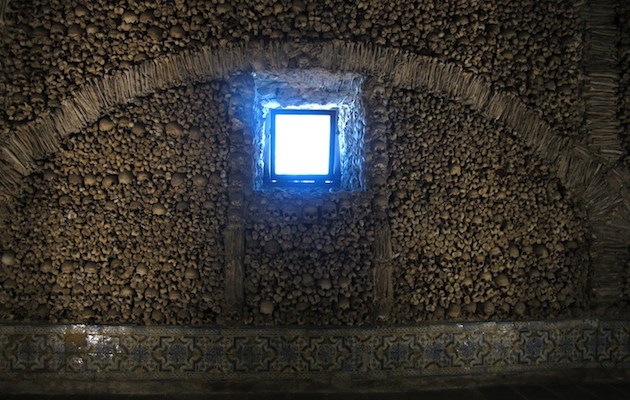 One might similarly — but more sanguinely — expect the facade of the Ecorkhotel (which officially opened in July) to consist of thousands of meticulously collected corks from years of Bacchanalian excess. Instead, the central structure of this post-modern minimalist eco-property is encased in sheets of the local material. Designed by Lisbon-based architect José Carlos Cruz, the hotel’s sprawling and sparse terrain makes it look a bit like a ranch in the Southwestern United States. It is, however, not dotted with rustic cabins, but pre-fab type cube cottages — a lodge for the architecture and design set. 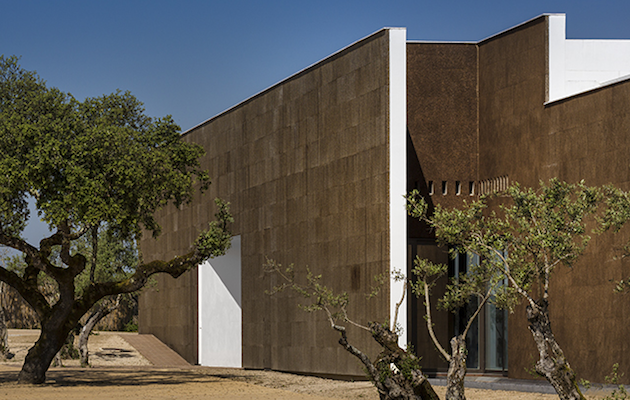 Dimensions of the Alentejo once again intersect at the nearby Convento do Espinheiro hotel’s restaurant, which is situated in an ancient wine cellar beneath geometrically positioned cylindrical archways. Down its optically illusive hallway and around the corner, the hotel’s official wine cellar hosts tastings with a spectacularly showy twist, otherwise referred to in ceremonial champagne-drinking circles as sabrage. With an old dagger, a sommelier masterfully ‘decapitates’ a bottle of 2009 Herdade Dos Grous Reserva Tinto at the neck — thankfully leaving its precious cork untouched.

Beyond its dank and mysterious cellar, the stunning luxury hotel is rich with other hidden, serendipitous nooks. Behind an unassuming little door whose placard reads ‘Tasca do Chefe’, (chef’s chophouse) is a tiny room with a banquet table and kitchen with a wood-burning stove: the Convento’s laidback version of the exclusive chef’s table. In it, the casual, home-style nature of the Alentejo’s culture and cuisine is brought home through cooking demonstrations highlighting rice, lamb and egg dishes and seemingly endless pours of more of those delectable Portuguese reds like a Vinha D’Ervideira — a blend of Cabernet Sauvignon, Trincadeira, Aragonez, and Alicante Bouschet. 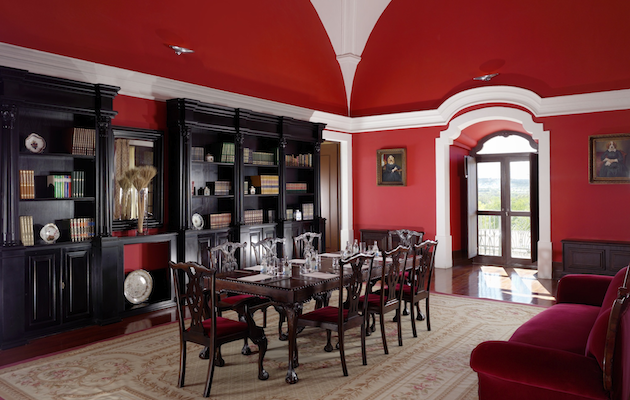 On this particular occasion, the Moroccan chef Bouazza Bouhlani and Portuguese sommelier Cristiano Santos break out a recording of that populist regional tune ‘Grândola: Vila Morena’ . Its robust spirit and evocative lyrics speak volumes of the inspiring, mystical chiaroscuro that is the Alentejo: ‘Grandola, your desire I promise to take as my companion — in the shade of an oak tree whose age cannot be known’. Rather fitting, don’t you think?

For more information on tours and travel to Alentejo visit Sunvil Discovery and the Alentejo Promotion Office.

Click the links for more information about Convento do Espinheiro and the Ecorkhotel in Evora and Herdade das Barradas da Serra.