Behind every highly stylised look we see on the cinema screen, is a costume designer who created and shaped that image. From Marilyn Monroe’s ivory halter-neck “subway dress” in The Seven Year Itch to Rita Hayworth’s black strapless femme fatale-esque dress by Jean Louis in Gilda – both brought sophisticated high-maintenance, high-glamour to the silver screen. Doing it for the boys were James Dean and Steve McQueen, who were both responsible for defining a quintessentially American male dress code – Dean with his red windbreaker and turn-up jeans in Rebel Without A Cause (an expression of effortless American cool) and McQueen’s Ivy League style in The Thomas Crown Affair. These screen legends and many of their contemporaries shared one main theme in common – they and the costume designers who created their looks inspired fashion trends of the 20th-century, thus enduring as timeless styles. 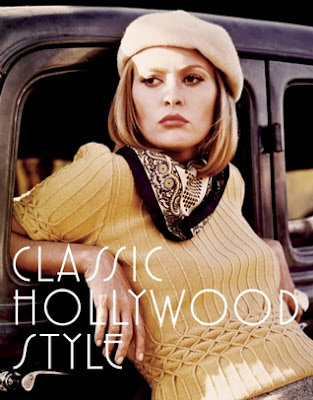 Now in a new book, entitled Classic Hollywood Style, writer and journalist, Caroline Young explores the golden era of Hollywood and the looks which have become iconic cinematic images. Referencing 34 popular and some lesser-known films spanning from the 1920s through to the 1960s, Young focuses on both the historical perspective and the social context of the costumes. The book also includes photos which have captured our imaginations over time, interviews, original costume design sketches, anecdotes and movie trivia. As vintage Tinsletown glamour continues to inspire contemporary red carpet trends, the book also offers some valuable insights into how to achieve the look today.

Young discusses designers such as Edith Head, who won eight Academy Awards for her work, of which Alfred Hitchcock was a fan; Adrian, who custom-designed Judy Garland’s red sequined slippers in the 1939 film, The Wizard of Oz; and Travis Banton, considered to be one of the most important designers of the 30s, and a former Chief Designer at Paramount Pictures. Banton was responsible for introducing and defining the inimitable style of Hollywood icons including Marlene Dietrich and Mae West.

Young explains how these designers became stars in their own right as a result of their work for screen sirens including Jean Harlow, Joan Crawford, Norma Shearer, Carole Lombard, Ginger Rogers, Bette Davis, Katherine Hepburn, Hedy Lamar and Lana Turner among others. The effect of their work could be seen in the queues of women who flocked to department stores to find mass-produced copies of the gowns they had seen on screen and in film magazines. Those who weren’t buying on foot, were running up their own versions on sewing machines at home with the help of ‘how to‘ magazine patterns. From lowered hems and berets in the 60s – an homage to Faye Dunaway in Bonnie and Clyde (stealing money never looked so good) – to the LBD (Little Black Dress) by Hubert de Givenchy worn by Audrey Hepburn as Holly GoLightly in Breakfast At Tiffany’s, cited as “one of the most famous little black dresses of all time” (The Independent, 2010) – together these designers were part of a fashion zeitgeist.

Beginning with the 1921 film, Camille, starring Rudolph Valentino and Alla Nazimova, through to films such as Gone With The Wind (1939), To Catch A Thief (1954) and High Society (1956), Young uses archived studio press releases and censorship records, behind-the-scenes production notes and articles from magazines at the time, to build this text-heavy but engaging visual journey through the classic costumes and costume makers of Hollywood’s golden era.

Like many fashion on film-based tomes such as Dressed: A Century of Hollywood Costume by Deborah Nadoolman Landis (2007), Young’s book is at the core an exploration of the cultural impact of fashion in film and on its audiences; along with a study into the relationship between designer and actor/actress – film has the capacity to make someone a star but the people behind that on-screen style can make a fashion icon too.

One thing about Young’s account of Hollywood history that I found particularly interesting (because I had never heard of it), was her references to the ‘Hays Code’, mentioned at various points within the book. The ‘Hays Code’ was a Motion Picture Production Code introduced by major film studios from 1930 to 1968 (enforced from 1934), to ensure movies didn’t cross their moral line. Basically the movie industry policed itself ensuring their productions were “wholesome” and “moral”, meaning a move away from thighs, cleavage, racy camera angles and low-cut or revealing costumes – so I don’t quite understand how Marlene Dietrich as a sexually-depraved, dominatrix ruler with a whip, in The Scarlett Empress (1934), passed the code?! However, designers did manage to work around the restrictions by introducing backless floor-length gowns and halter necklines, creating a more sophisticated, feminine silhouette.

I would recommend Classic Hollywood Style as a good reference for fashion and film students, and for the rest of us, it’s the kind of book that would suit a Sunday afternoon on the sofa with a glass of wine (particularly as it’s got lots of pretty pictures to look at). Once you’ve finished reading, it makes a stylish coffee-table look good, and the cover image of Faye Dunaway in Bonnie & Clyde also makes for good conversation – such as the one which took place at mine when one of my girlfriend’s spotted the book, “Oh I love that film” she said, “Bonnie Parker rocked“. Yes she did, if fast getaway tweeds are your thing, but I would probably give the bank robbing a miss.

If you love films, Hollywood and fashion, then you’ll love this book. Classic Hollywood Style by Caroline Young is out now, published by Frances Lincoln Limited, priced £20.00.