Trending
You are at:Home»The Culturist»Music»Puccini in the Park
By Matt Hutchinson on June 26, 2012 Music

Summer is finally upon us. How can you tell? All around the UK festival goers are getting soaked, cricket matches are getting rained off and Wimbledon organisers are looking nervously at the Met Office website. What better time to attend an outdoor opera in a London park?

First off, Opera Holland Park isn’t what you might expect. This is no umbrellas and blankets affair, where everyone pretends to enjoy a waterlogged M&S picnic while a tenor in black tie (tiny in the distance despite his Herculean frame) belts out operatic favourites into a mic. Opera Holland Park is the real deal. Audience, stage and pit are all covered, seats are comfy and production values are high. In fact the only hint at frugality is the slightly reduced orchestra. 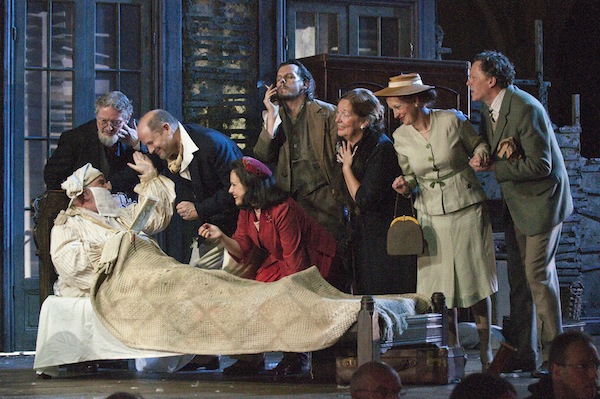 So far, so good but what about the opera? Well, for starters, it’s operas as OHP’s latest offering is a double bill. On the face of it the operas, Mascagni’s Zanetto and Puccini’s Gianni Schicchi, have a lot in common. Both are short one-act operas penned by Tuscan composers and both are set in or around Florence – Mascagni’s Zanetto some time during the renaissance, Puccini’s Gianni Schicchi slightly earlier in 1299 (although, in this instance, updated to 1942 for the purposes of the production). In reality, however, they’re entirely different.

Our first, Zanetto, is something of a rarity (it’s the first time I’ve come across it) and begins with a lovely off-stage choral prelude instead of an overture. After that, despite a few extra bodies onstage at the start, the opera is a two-hander. Its theme is the loss of youth and the struggle of one woman to open herself to love she had foresworn. Beautifully sung by Janice Watson and Patricia Orr (who manages the tricky feat of a trouser role without resorting to the thigh slapping ‘Bob from Blackadder’ cliches so many singers do) there was a real ache throughout, heightened by thoughtful direction and underpinned by some fine playing and conducting. The piece reminds me in many ways of Strauss’s Rosenkavalier (dramatically rather than musically) and deserves to be heard far more often. It’s also refreshing to see an opera in which a character of unknown parentage (Zanetto himself in this case) doesn’t turn out to be the long lost son of the woman he’s about to fall in love with. The only thing it suffers from is being rather one-paced but, at 40 minutes long, that’s a minor quibble. 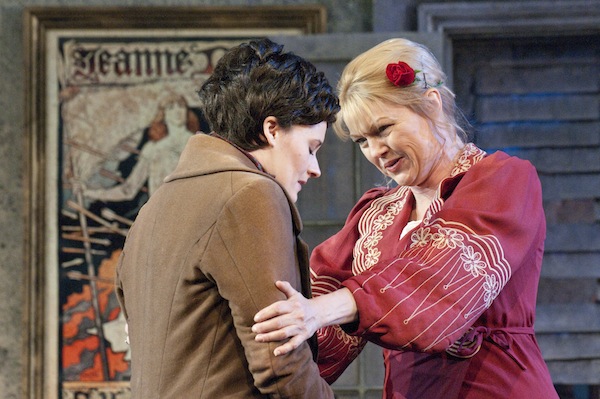 Puccini’s Gianni Schicchi, on the other hand, is as quick-fire and well-paced as opera can possibly be. It has all the energy, humour and zip of the best farce and grabs you from the first bar. It’s more of an ensemble piece that pretty much any other opera (certainly more so than most Puccini) and relies for its impact on great character performances, something this OHP cast has in bucketloads. With so many bodies onstage throughout, the opera needs actors (not just singers) who can establish a character quickly and remain in it throughout. The pick of a very fine bunch were Carole Wilson’s Zita, Simon Wilding’s Betto and Alan Opie in the title role. Anna Patalong sang Lauretta’s short aria O Mio Babbino Caro beautifully, not an easy task when, essentially, all you have to do in the opera otherwise is feed a few birds. The direction was superb – the friend I took along (an opera singer herself, no less) remarked that Gianni Schicchi is an opera that begs to be choreographed as much as directed and this is precisely what Martin Lloyd-Evans did so well. From the wonderful opening, in which Buoso Donati’s relatives wait for him to die, to Schicchi’s final aside to the audience, the pace never dropped for a second.

I really do urge you to go and see OHP’s Tuscan double bill while you get the chance. Zanetto was good but the real highlight of the evening is an absolutely top drawer Gianni Schicchi.

Photos by and courtesy of Fritz Curzon.