“Sir, please choose a knife.” David, my waiter, thoroughly Portuguese but with a parentally acquired Essex accent, presents to me a wooden case. A dozen exquisite Lagouile steak knives are balanced on the felt, each handle carved of a different wood. I choose a bloody rosewood, to match the hue of the veal I’ll be carving it with. The handle smells better than some meals I’ve had. I’m reclining on a poolside terrace in Portugal, hungrily sniffing wood. It’s been more than two hours since I embarked on the tasting menu at Gusto, Heinz Beck’s adventurous eatery in the Conrad Algarve. Officially there are seven courses but I could swear I’m already at number eight. The rosé that accompanied the last course was so sharp and upbeat, a stimulant almost, and in combination with the enthusiastic wood-huffing, I’m starting to feel a little dizzy. 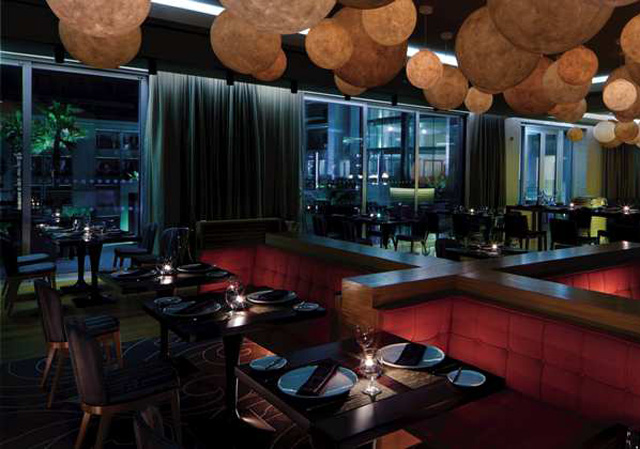 Heinz Beck achieved superstardom with La Pergola in the Rome Cavelieri. When it racked up three Michelin stars, the world was Beck’s oyster, and only the gastronomic gods know how many opportunities he turned down for the site of his first restaurant outside of Italy before settling on Apsleys at London’s Lanesborough Hotel in 2009. In October 2012, Gusto opened at the new Conrad Algarve.

I asked Beck why, of all the world’s luxury locations, he settled on Portugal. His answer was simple: ‘London was a rational decision. This was an emotional decision’. The good folks at Hilton told him about the spot and he came, just to take a look. Once he’d seen the building and its setting, there wasn’t much of a decision to be made. Glancing out of the window at the immaculate white marble, with shimmering pools falling away to the verdant Mediterranean scrub, stretching through miles of golf courses and vineyards all the way down to the Atlantic, I can see how Beck was seduced. There are worse places to work. The surrounding countryside is replete with wild herbs and the fresh fish is among the best in Europe. 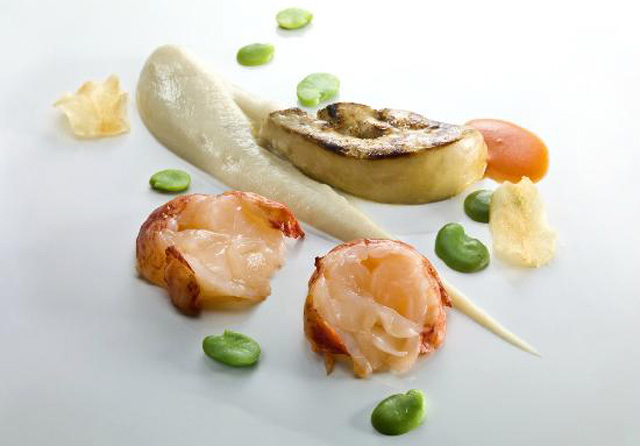 When I arrive at the restaurant, I glide past the smooth lines of the bar, complete with laptop-manning DJ, past the enormous glass chamber which displays the bar’s wines, through the dark-polished seating areas, and out onto the terrace overlooking the hotel’s infinity pool. The interior is fairly shadowy, lit subtly by an array of suspended beige bulbs on one side of the bar and a lengthy wall of fire on the other. But on a night like this, the terrace is the only place to be. As darkness and temperatures fall, huge conical fire-dispensers are brought to keep us warm, and waiters drape shawls around the shoulders of female diners. It’s a nice touch and it proves necessary, as the epic meal unfolds.

The first amuse bouche certainly sets the tone; rosemary squid, a fine use of the local fish and herbs. It comes resting in a green ice bowl. Both as a chef and in person, Beck has an energetic sense of humour, and the meal is liberally sprinkled with amusing touches like the ice, which fall short of gimmickry but do add a sense of fun to the proceedings. Some mint jelly in a herb infusion follows and then we’re at the first course. Each is paired with wines from the region. 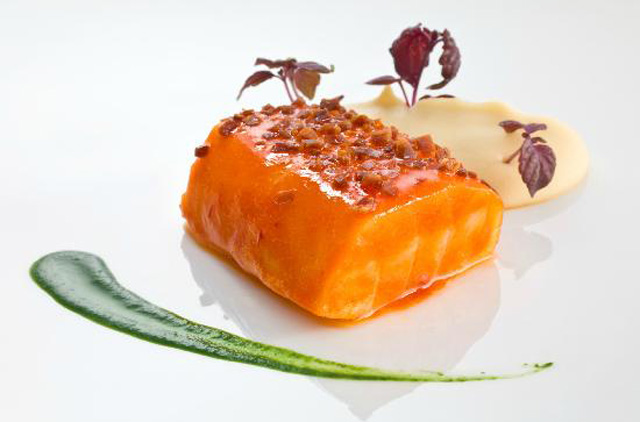 Duck foie gras with smoked apple, amaretti and cocoa beans gets us on our way, and while the liver is certainly rich, almost fondant-like in its texture, it’s the biscuits that really set the course off. It’s been paired with a ten-year-old Moscatel de Favaios from the Douro region – it’s a bold move, putting such a bolshy sweet wine right at the top of the meal, but it does lay the cards on the table and puts every diner in a slightly giddy, expectant mood.

Ginger marinated tuna panzanella with yellow pepper and black olive dust is next, and is probably the only course that leaves me a little flat. The yellow pepper is tasty beyond any pepper I’ve eaten, but the soaked bread is a little uninspiring and the black olive is so strong that it easily dominates the tuna.

However any despondency doesn’t last long. The next course coincides with nightfall, and our table is hurriedly strewn with candles and surrounded by flaming torches, building the drama before the pea cream with prawn tartar and tarragon infusion arrives. It blows me away: the flavours are so much more intense than anything based on pea has any right to be, the prawns are succulent, and every mouthful warms me deeply from within. We’re back on track, and Beck is about to serve his blockbuster: fagottelli carbonara. 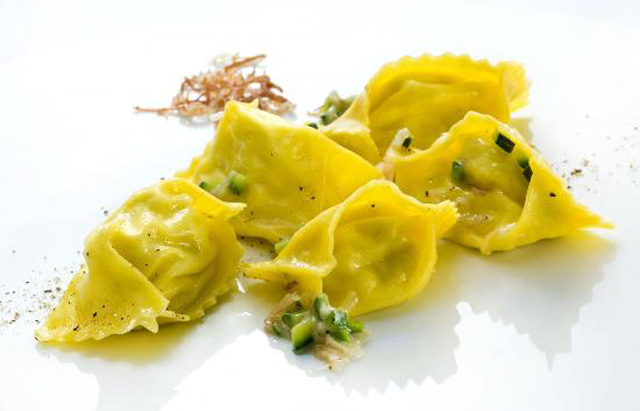 The dish was a signature at La Pergola, and when Beck took it off the menu for a while, people just ordered it anyway. Initially he accommodated select loyal customers, but eventually caved to overwhelming public demand and reinstated it in all its glory. The carbonara is formed with the sauce on the inside. At a demonstration the next day Beck showed us how it was made, slowed not a jot by a bandaged and fractured wrist after a recent kitchen slip, and accompanied by a magnificently eyelashed young Italian chef (‘This guy is Mister Fagottelli,’ Beck declared). Doughy sheets of pasta are rolled and re-rolled until they’re ready to form the parcels into which the pecorino and egg-yolk sauce is piped. They’re boiled, and then a bit of veal broth, some guanciale cheek bacon, and diced courgettes are involved before the fagottelli hit our plates.

It looks remarkably simple but the effect is extraordinary. I can see a table of food writers desperately trying to think of a phrase that doesn’t include ‘the juices squirt out all over your mouth’, but I’m sure they’ll all fail. Having creamy hot cheese escape from bacon-flecked pasta while you are actually eating it is quite a sensation and it’s no wonder that Rome refused, en masse, to let this one go. 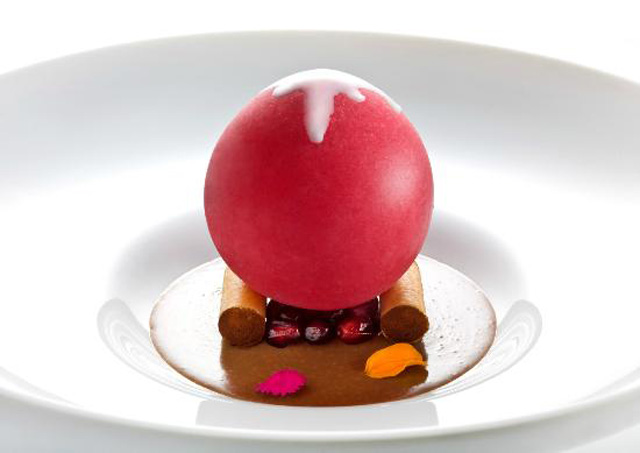 It’s a tough act to follow. The next dish is a crispy edged Alaskan black cod, sprinkled lightly with celery shavings, resting in a sweet cherry gazpacho (which is warm, confusingly, but I’m game). It follows wonderfully and the QMF Rosé that accompanies it is my favourite wine of the night, with peach notes complementing the cherry. It’s at this point that David brings the blades and we hunker down for the veal. The night has drawn in but the waiters are keeping us warm and the DJ has progressed from Daft Punk to Sinatra.

The pleasantly rare veal ai cinque pepi arrives at the table via a three-wine marinade, seasoned with a blend of five peppers, including the dominant Szechuan, which combines well with the smoked eggplant crème and wild fennel. My trusty rosewood Laguoile makes short work of it, and if I’m honest I feel sad when the waiter takes it away. The veal also heralds the long awaited arrival of the night’s first red wine, a hearty number from Douro, home to many a fine fortified wine; I sink into my chair, finally ready for dessert. 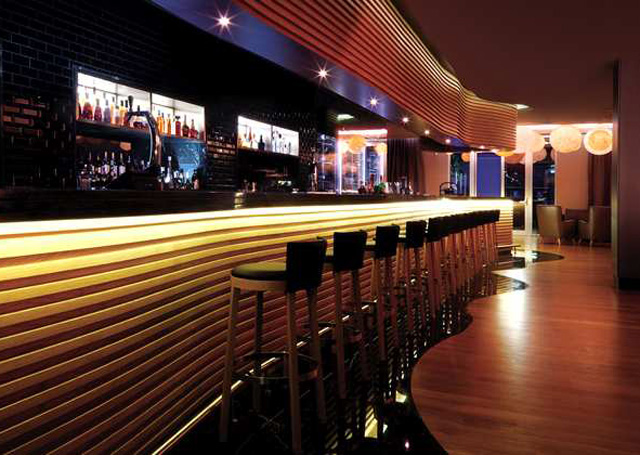 A pre-dessert arrives in the shape of a strawberry brunoise with popcorn ice cream, and then the main event, simple called ‘Chocolate…’. It’s been a good three hours since the rosemary squid, and it’s a fitting end to the meal: there’s ice cream, there’s meringue, there’s crunchy chocolate ‘sand’, there’s an enormous chocolate rice flake, there’s a solitary raspberry, and there’s a table full of satisfied diners. In keeping with Beck’s commitment to cuisine that’s as healthy as it is tasty, by the time it’s gone I feel sated but not unduly full, and any fatigue is due only to the epic running time and not overindulgence.

The DJ winds down and we slip off into the night, enveloped by the white marble and luxury of the hotel, a cool May breeze bearing us back to our rooms. If it was an emotional decision for Beck to pitch up in the Algarve, it’s one that paid off, and certainly came through in the cooking – without resorting to gimmicks, it’s been an evening of terrific variety, infused throughout with the good humour and brio of the chef himself and supported by the stunning quality of the local produce. The Algarve is worth a visit for the fish and herbs alone (golf be damned!), and you’ll struggle to find a better and more interesting take on them than that of Heinz Beck.