Hundreds of alien-like crustaceans were crawling around in the trays in front of me, pincers waving in the air, tiny legs clicking all over each other’s backs and bodies. I leaned over them to get a better look, and as I did so they started to wave their pincers furiously, opening and closing their claws. Picking one up, it assumed a ninja-like pose, legs akimbo, pincers poised – it was ready to fight. 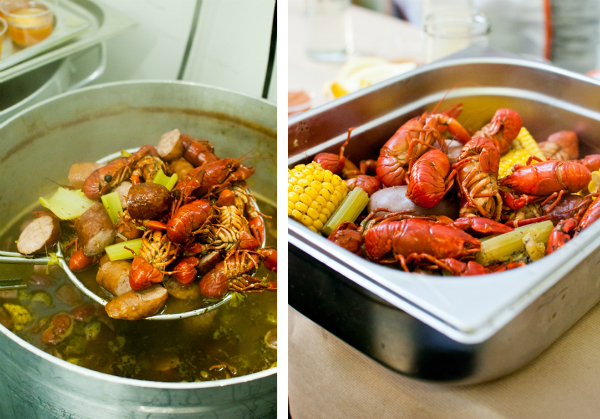 Shame that in this fight its fate was already determined, as vats of boiling spicy stock stood waiting in the background, the air thick with the aroma and ready for the last ingredient: buckets and buckets of American Signal Crayfish. Not so lucky for the crayfish, incredibly lucky for me, the person who would enjoy this feast because this was Bea’s Crawfish Boil, a Louisiana-style summer feast, and behind me there were 69 other people waiting for their fill; judging by the amount of crayfish I was staring at, we were not going to be disappointed.

For a while now, the American Signal Crayfish has been the scourge of British waters. First introduced in the 1970s and bred on farms for the restaurant industry, a handful of escapees made their way into the surrounding waters where they bred, multiplied in the thousands (they can each lay up to 250 eggs in one sitting) and started to destroy everything in their path. Eating everything they came across from plants to even their own young, burrowing their 6-inch bodies into the surrounding river banks which would cause flooding and damage to buildings, and carrying with them a disease which kills the UK’s native White Clawed Crayfish, these aggressive pests have proven relentless and almost impossible to control. Enter Crayfish Bob.

Bob Ring, or Crayfish Bob as he is more commonly known, took it upon himself nine years ago to single-handedly tackle the American Signal Crayfish plague. By studying the behaviour and habits of the American pests and devising a unique “clip and chain” system, he succeeded in creating an extremely effective method of trapping hundreds of them and turning them into, well, edible product – everything from potted crayfish to the slightly more unusual, er, crayfish ice-cream. Really, in terms of alien crayfish, Bob is a god; an eco-hero and leading authority on everything cray in the UK. 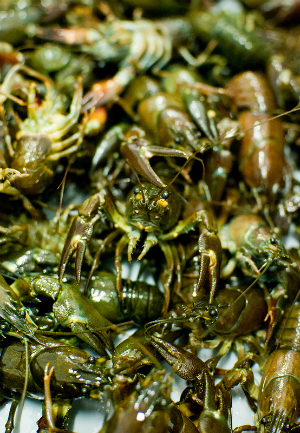 So how did Bea Vo of Bea’s of Bloomsbury, best known for her cakes and bakes, end up partnering with such an individual to host weekly crayfish feasts, or ‘crawfish boils’ as they’re known Stateside, throughout the summer at her Maltby Street Diner location?

Vietnamese-born but Virginia-raised, Bea straddles many cultural lines. Growing up in the South, crawfish boils are simply a summer way of life: “My diner here at Maltby Street is really just me living out my childhood,” she explained. “We do the diner on Saturdays where we get to serve pancakes and French toast and all that sort of stuff, and now the crawfish boil on Thursday evenings.”

Having worked in the catering business since the age of 19, Bea knows food and business well, and describes her past self as an “eco-militic” person. After participating in a sustainable living web conference at the beginning of the year, she started trying to figure out how to incorporate various sustainable food ideas into her three existing cafes and now diner, culminating in a meeting with Crayfish Bob. They discussed the problem of the smaller crayfish, the ones that are really too small for commercial use, and the idea was born: why not bring Crawfish Boils to London, a city that has already adopted and obsessed over so many other American food traditions? She could pack the diner with feasters and get them to work their way through a couple of tasty kilos each, all for a modest fee and, at the same time, saving the world.

Though Bob does not normally supply live crayfish, for fear that a few will escape and infest previous un-infested British waters, for a culinary feat such as this he will, of course, make an exception – cooking them live is part of the experience and ensures freshness – and really the point of these boils is simply this: to eat as many of the suckers as possible; no cray would be escaping tonight.

Sat down at our communal table, bib tied around my neck and a glass of fresh raspberry lemonade at my side, I was ready to do my part for the environment. First the heady stench from freshly baked garlic bread hit, then the main event arrived in seemingly endless trays emerging from the kitchen – the crayfish were ready.

Boiled together with starchy potatoes, sweet, buttery sweetcorn and thick, meaty, sausages in a special mix of Louisiana-style spices, the crayfish were bright red and steamy. We took one each onto our paper plates and started to dig in – ripping off the head to suck out the sweet tomalley (the liver/pancreas), juices and spices, then cracking open the body to get to the tail. It’s somewhat brutal but after dipping the tail into your selection of sauce (cocktail sauce, Bea’s “comeback sauce” and Cajun butter) and popping the whole bite-sized portion into my mouth, it was all worth it. Fingers sticky, dripping and every inch of me smelling like crayfish, I dug in and grabbed three more. Not being greedy, saving the world, remember? 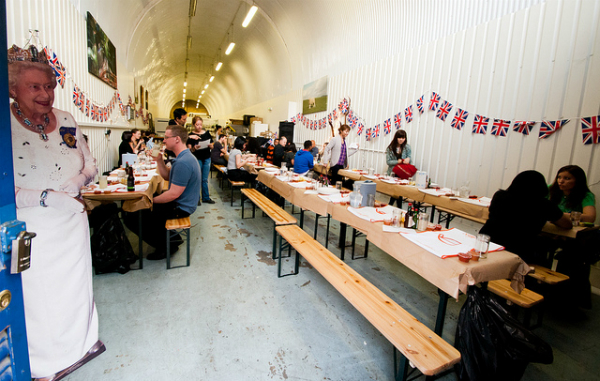 Three hours later and we had amassed an impressive amount of crayfish carcasses on our plates. Frankly, I feel I could’ve eaten twice as much but by now everybody else had left and/or moved onto dessert – Bea’s homemade ice lollies (which came in margarita, key lime pie – especially delicious – or Pimms) – so for the sake of not appearing too greedy, I too gave up the fight… though I may have secretly taken a box home, which I then turned into creamy crayfish pasta for lunch the next day.

The atmosphere at the boil is fantastic, service impeccable, food and drink great and plentiful, and by the end of the evening you’ll be friends with everybody on your table. And how much will this all set you back? The measly sum of £24 – pretty good value for money, right? Sure, you’ll get a little messy, but that’s all in the spirit of a crawfish boil, sugar – just wear clothes with an expandable waist and preferably that you wouldn’t mind burning post-cray.

Both Bea and Crayfish Bob hope that following on from these summer weekly events the general public will be encouraged to start holding their own crawfish boil evenings. “We’re saving the environment,” Bea says with a smile; maybe if saving the environment were always so tasty we’d all be eco-warriors.

Visit http://www.beasofbloomsbury.com/crawfish_boil for details and to purchase tickets.

Read more about Crayfish Bob and learn how you can help save the environment, one cray at a time, at: http://www.crayaway.com