Trending
You are at:Home»The Foodie»Eating Out»Asian»Bo London
By Noah May on April 10, 2013 Asian, London Restaurants

Chinese chef, Alvin Leung, is something of a legend in Asian gastronomic circles, an avant garde performer who stands alone in terms of creative vision and culinary style. Leung cuts quite a dash, with strangely dyed hair, worn long, multiple tattoos and gothic, dangly earrings – not your classic Cordon Bleu look. Leung was born in London to Chinese parents in 1961, but spent most of his formative years living in Canada. Essentially a self-taught chef, Leung entered the culinary world relatively late, after an earlier career as an engineer, so the fact that his first restaurant, Bo Innovation in Hong Kong, currently holds two Michelin stars is something of an achievement. 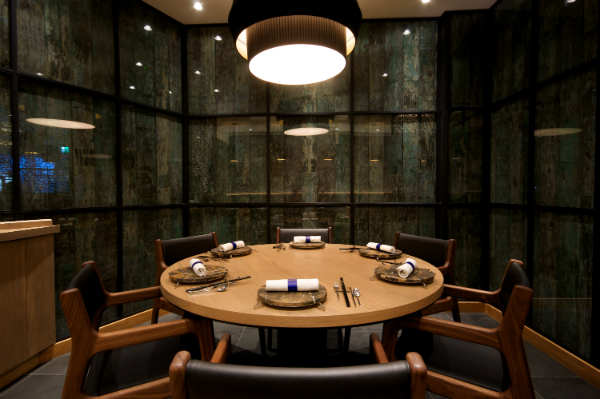 Leung’s first London restaurant, Bo London, opened in December 2012 to much intrigued press attention. A rather extraordinary video popped up on the restaurant’s website. In the video, Leung describes himself as the ‘Demon Chef’. He sells himself as a gustatory juggernaut who’s ready to push you to the limit and mess with your head. When watching the video – which has a slightly creepy voiceover from Leung, interposed with jarring sound sequences and disturbing images of burning, dripping, melting matter –  you have to remind yourself that this is a chef talking about food. It would be easy to imagine you’re listening to a conceptual artist or modern philosopher…I guess that’s the idea. There is a severity and intensity bordering on menace that seems a little insane, but is at the same time extremely compelling. The Demon Chef is going to ‘take you out of your comfort zone, to take you to the edge…of life and death. He is looking at ‘a dimension that nobody has actually looked at, because that makes it innovative’. I await my visit to Bo London in eager anticipation, unsure of quite what to expect, and ready for anything. 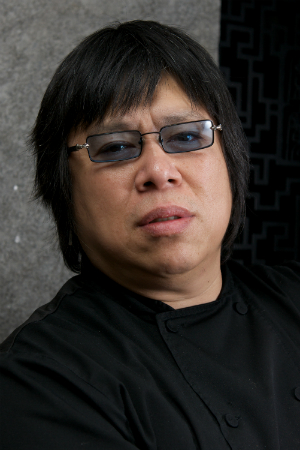 Bo London can be found on Mill Street, just behind Regent Street. The room is relatively small and simply-styled. Beige walls, with subtle touches of Oriental splendour, don’t scream X-treme Chinese cuisine that will push you to the edge, but I accept that first impressions are rarely accurate and I walk to our table with an open, intrigued mind.

To begin with there’s an intense, pink cocktail that’s served in a strange porcelain pouring device, which, like many of the dining apparatus that follows, has been crafted by Leong himself. The cocktail is made from clear, un-aged Chinese whisky, which we’re informed is revolting taken by itself, but made delicious by the skill of the barman, who infuses it with a number of tropical fruits to create an intensely wonderful drink, unlike anything I’ve ever tasted. Tiny sips stay on the tongue for what seems like an age, the exact taste of which I can recall now as I write this.

We opt for the ten course ‘Ode to Great Britain’ menu rather than the extended Chef’s Special Menu which comes in at a punchy £138 per person before wines. The Ode to GB menu is based on Leung’s interpretations of aspects of British culture that have inspired him. The ten courses come in tiny bounds of intensity, all served on strange Leung-created implements.

Wines are poured by Cedric Beaumond, a rather distinguished-looking Frenchman, with a passion for Burgundy, particularly La Tache – one of the ‘private bins’ from the short and expertly-chosen wine list at Bo London. This is not a menu that naturally invites wine; the complex combinations of flavour and ingredient, mean that a sommelier really has their job cut out. Cedric chooses carefully, selecting wines that help bring the most interesting or prominent flavour to the fore. The list is heavy on Burgundy and I think there is wisdom in this. This is the antithesis of a menu that asks for classic, Cabernet Sauvignon-based wines. 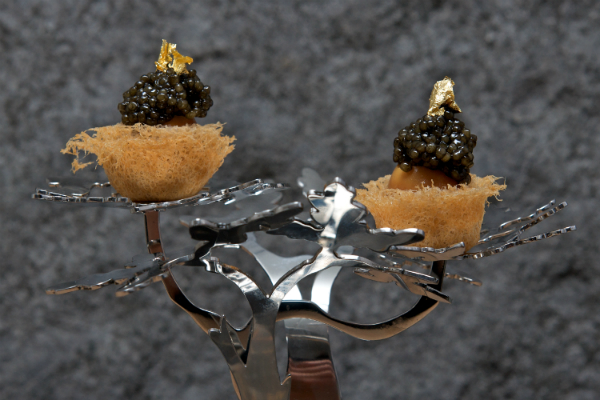 I’m not entirely sure of how the first course, ‘Dead Garden’, falls into Leung’s list of inspiring Britain – this is a bizarre little box of emulsified avocado, in a soil bed of dried, powdered morels and little sprouting stalks of enoki. I don’t really ‘get’ the dish, but it’s admirably intense of flavour. It is delivered by our waiter who seems to be plagued by a supposed professionalism that comes across as mild irritation. When I ask how different Bo London and Bo Innovation are, he looks at me as if I’ve asked what his mother likes in bed and replies “my colleagues here are white”, which seems rather offhand.

‘Bed and Breakfast’ is probably my favourite bite of the whole meal. A smoked quail’s egg has been wrapped in a crisp taro nest and topped with a generous portion of oscietra caviar. It’s a tiny burst of thrilling intensity which is delivered in the best possible format, a very pleasing dish. The next course ‘Cloud’ is a mere mouthful of diced yellowtail (usually mackerel, but the mackerel wasn’t up-to-scratch on the day of our visit), sesame and ponzu vinegar dressing, which comes as a ‘cloud’ of foam. There is a resounding smoky character to the dish that remains in the mouth long after the fish has gone. ‘Steak and Kidney’ is a re-imagined xiao long bao stuffed with steak and chopped kidney and topped with a few black pearls of caviar. The dumpling is light and well-steamed and the filling has the approriate renal tang; I love nothing more that the classic steamed steak and kidney suet pudding, so this is a refined treat. There are several courses that follow, which fail to inspire. For instance, ‘Tomato’ offers three renderings of the humble tomato, each one stranger than the last, the final one I’m faced with is a marshmallow foam that’s been impregnated with an essence of green tomato. Not unpleasant, but somehow joyless. ‘Pigeon’ is the next great return to form – this is a spectacular dish. Perfectly cooked slices of deep pink, gamey pigeon suspended in an aromatic bouillon. A simple, elegant triumph of a dish. 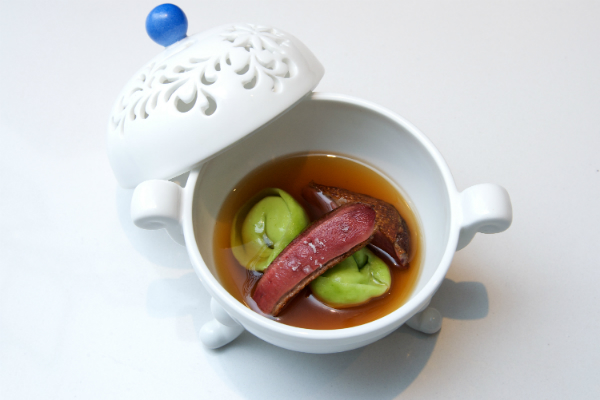 Pudding consists of several interesting light bites, which all lead inevitably to the notorious ‘Sex On The Beach’. For those of you who haven’t read about this playful little dish which I can only assume is Leung’s take on the aftermath of a Brit-abroad’s alfresco holiday conquest, it involves a pink ‘condom’ filled with corn starch in solution presented to questionable affect. The income from this dish goes to The Elton John Aids Foundation which is undoubtedly a great charity and a generous sentiment, but as a plate of food it is fairly uninspiring. Once the obligatory frisson of schoolyard excitement and sniggers subside, you are left with a ‘used’ condom on your plate, a position one should never find oneself in.

Bo London is one of the more unusual openings of the year. There are moments of brilliance here, dishes that have been conceived to be entirely unique and to use ingredients and preparations that you’ll struggle to find anywhere else in town, but I fear that the consistency and attention to detail may let the restaurant down. I love tea, and so it’s a joy for me to sample the high grade green, white and oolong teas that are available these days in London restaurants. When we ordered tea at Bo London, we were served bags of Clipper Tea, the same as can be bought at a local supermarket. I think the restaurant needs to up its game a little if it is to do itself justice and compete at the level it wants to and prices itself at. This is a restaurant with extraordinary potential that needs to find its way.