As we enter the Year of the Rat, the symbol of wealth and surplus, Alex Larman offers us a surfeit of choice for the finest in Chinese cuisine that London has to offer…

Just as Indian restaurants in London have evolved far beyond the clichés of chicken tikka masala and lamb roghan josh, so the most interesting Chinese destinations are now stirring examples of culinary brilliance rather than tired displays of sweet and sour chicken. On the whole, the streets around Chinatown are not where you will find the most interesting cooking today – and the rudest and most peremptory staff are certainly lurking inside some of the restaurants – but there is a remarkable variety of cuisines to be found in the capital, including Cantonese, Szechuan and many more. Here are some of the unmissable places to visit at the moment, ranging from old favourites to cutting-edge excellence.

The flagship restaurant of what is becoming one of London’s most interesting small groups, the slightly unprepossessing appearance of BaoziInn’s London Bridge establishment belies the care and delicacy with which the Northern Chinese street food has been assembled. The dumplings, which often come in a variety of colours, are already (and rightly) famous, but virtually everything on the menu has some intriguing twist, whether it’s the barbeque roast duck (every bit as good as the famous one at Min Jiang) or a particularly good, spicy lamb chop with cumin dish, which has a fiery heat that belies its blushing description as ‘mild’. 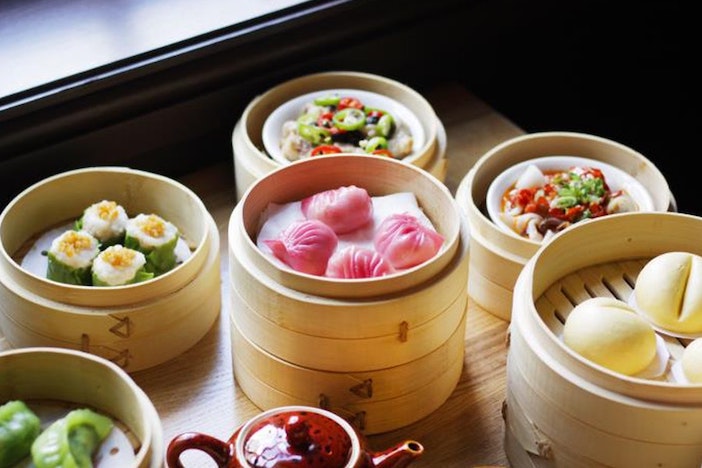 Service is amicable, if a bit timid, and we were amused on our visit to be solemnly told that the cocktail menu was unavailable ‘because the bartender doesn’t come in on Tuesdays’. There’s a short, decent selection of wine, of which the Chablis is the pick of the bunch, cutting through the spice, fat and heat of the dishes with some aplomb. 34-36 Southwark St, London SE1 1TU www.baoziinn.com

The Hakkasan group spans the world from Mumbai to Miami, but it has always retained an ineffable air of chic and contemporary sophistication, which can be found in abundance in its Mayfair outpost, a stone’s throw from Berkeley Square. All the hallmarks of high-end, Michelin-starred dining can be found in its basement setting, ranging from flattering and moody lighting to a carefully constructed menu that delights but never overwhelms. 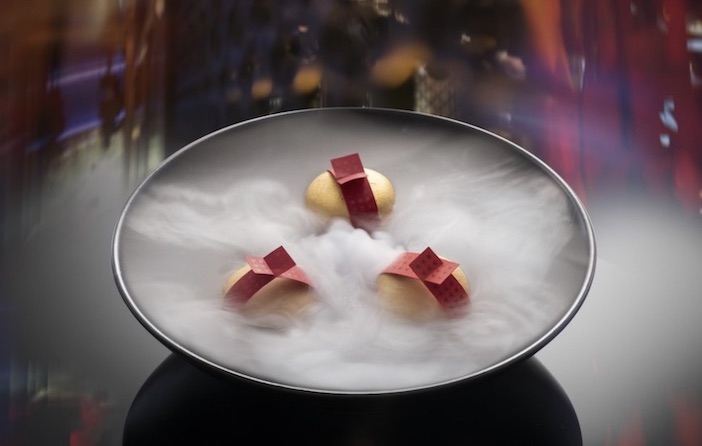 The signature dishes here are truly splendid – the Peking duck puts virtually anywhere else in the capital in the shade, and the roasted silver cod one-ups Nobu with its sauce made of champagne and honey – and there are more exotic things to try as well, including delicious lamb cannon and wok-fried lobster. The wine list is comprehensive, pricy and well-chosen, and the cocktails remain legendary, especially the goji strawberry martini. Hakkasan Mayfair is expensive, perhaps eye-wateringly so, but you definitely get your money’s worth, and then some. 17 Burton Street, W1J 6QB www.hakkasan.com

Traditionally restaurants situated high up are more about the impressive views than the food, which makes the excellence of the cooking at Hutong such a pleasant surprise. Situated on the 33rd floor of the Shard, it specialises in Northern Chinese cuisine, spiced and flavoured to perfection, and offering the most breathtaking panoramas of the capital, wherever you are sitting. 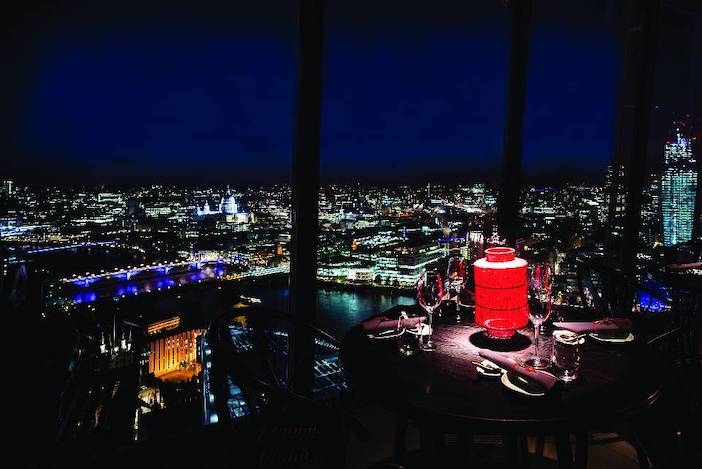 The prices here are not cheap – although the dim sum, particularly the Iberico pork dumplings, are very decent value – but the experience, both in terms of the setting and the culinary excellence, is one that cannot be duplicated anywhere else. The particularly fine chilli prawns, deep-fried de-boned lamb ribs and beef tenderloin are all must-try dishes, and the wine list, although priced as stratospherically as the location, has some very good, unusual options, not least a fine German Riesling, which complements the heat beautifully. Level 33 The Shard, 31 St. Thomas Street, SE1 9RY www.hutong.co.uk

This St James spot, situated in the former Lloyds Bank, has a reputation for serving up the very best dim sum in the capital – far outstripping former warhorses of yore – and it’s not at all hard to see why. Imperial Treasure is an international venture, and it’s bizarrely low-key compared to the (massively overrated) Din Tai Fung, but everything that you eat in here is going to be splendid. The formality may put some people off, but rest assured that you shall eat very, very well indeed. 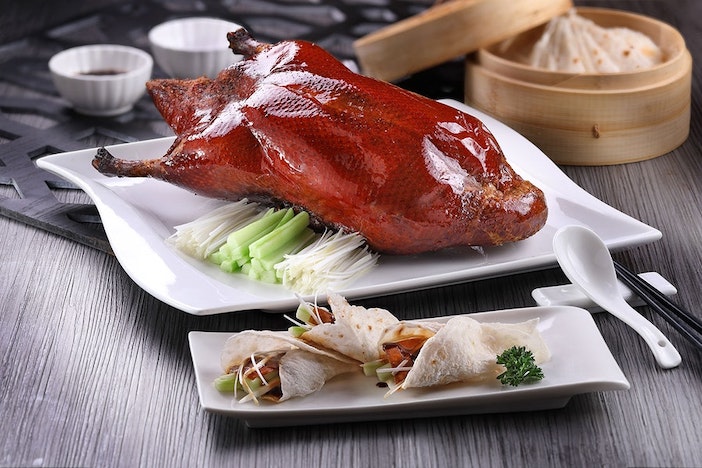 While there are lots of intriguing things happening on the a la carte menu, it is all very expensive, and you will be better off if you stick to a short, sharp sampling of the baked snow mountain with iberico pork dumpling (the descriptions alone are worthy of a Victorian novelist), the venison puff with black pepper and the extraordinary steamed charcoal bun with custard, a perfect end to the meal. Wines are unusual, and the Chinese ‘Skyline of Gobi’ red is one of the most interesting things that you’ll find anywhere in the capital at the moment by the glass. 9 Waterloo Pl, St. James’s, London SW1Y 4BE www.imperialtreasure.com

‘You must go to Hunan’, a friend urged me when I told them I was writing this feature. ‘It’s the best Chinese food in London.’ That may or may not be true, but what is unquestionable is that you will have the most unusual dining experience. One arrives at a smart but unassuming spot in Chelsea at a given time, and then one has a (strictly monitored) two hour slot to enjoy a wide, extraordinarily varied range of dishes, brought to the table with witty aplomb by waiting staff who have been well-drilled in the art of serving excellent food at some speed, all of which is served at a set price at lunchtime and at dinner. 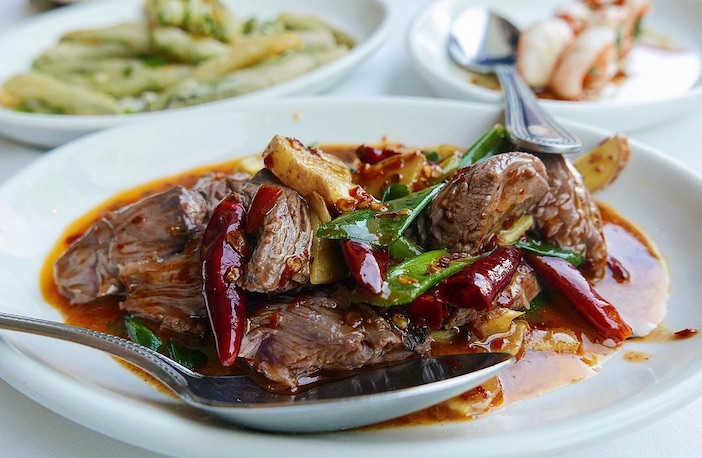 The menu is more eclectic than other places than you will find on this list; the staff are rightly proud of the fresh fish that they serve (expect clams, mussels, monkfish and sea bass), and the small dishes come with both aplomb and curiosity value. Incongrously, this is the place in town that is serving something closest to what you might expect in a hole-in-the-wall place in rural China, the most interesting and unusual food that is in the kitchen that day. The wine list is justly famous, and Rieslings and Gruner Veltliners complement the food without breaking the bank. 51 Pimlico Rd, Belgravia, London SW1W 8NE www.hunanlondon.com

Andrew Wong’s second restaurant, after his acclaimed experimental Pimlico spot A Wong, is a very different proposition; no dim sum, and a menu based much more around the traditional Cantonese arts of roasting meat, albeit with some typically Wongian twists. Of the sharing plates, the ‘lamb burger’ and pork and shrimp bao bao are particularly excellent, as you’d expect. The lamb burger is in fact a DIY series of plump bao buns that you can stuff yourself, adding a welcome sense of adventure to the meal; the pork and shrimp bao bao is a gurgling concoction which features fried egg, crispy chilli and a host of other lovely things. 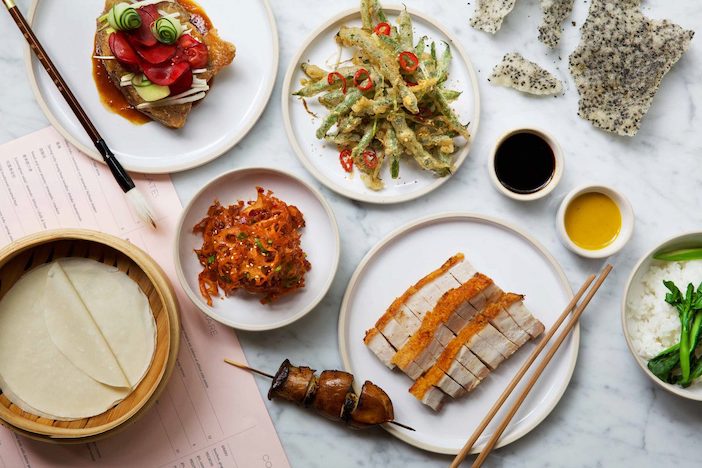 However, no visit to Kym’s is complete without trying the three treasure. This delight is a combination of crispy pork belly, soy chicken and Iberico pork, each served with its own dipping sauce. Having tried a very similar dish at one of Beijing’s very best restaurants, and still believing that to be one of the most delicious things I’ve ever eaten, I can happily report that this is at least three-quarters as good; testament to the wisdom of using top-quality ingredients and having insanely talented chefs in the kitchen. 19 Bloomberg Arcade, London EC4N 8AR www.kymsrestaurant.com