Obviously, I had my own ideas about why it was called that.

‘How very wrong’, my friend interrupted my stream of prattling as we walked down past Windsor Castle one Friday evening. ‘It’s nothing to do with George, the name’s taken from a rare and apocryphal book in the Bible, the book of Daniel. He of the lion’s den fame. The story essentially involved Daniel finding a false god – ‘Bel’ – and then fighting a dragon. So there we are.’

Her explanation was entirely satisfactory, but for one factor. ‘Why has an upmarket group of restaurants and hotels chosen to take their name from a confusing and obscure biblical story?’

She looked at me as if I were stupid and mad, which to be fair isn’t the first time I’ve had that reaction. ‘So that people like you spend the introduction of their reviews discussing it in detail, no doubt.’ And that shut me up. 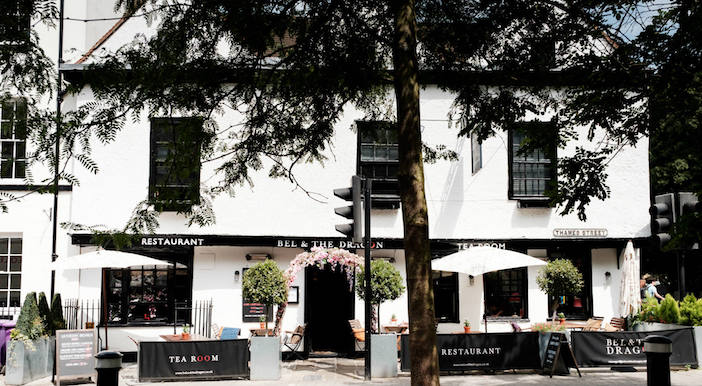 Windsor and Eton isn’t known for especially interesting dining, but in the glorious form of Bel and the Dragon, it has one of the most stylish and delightful places in the area. The atmosphere is half traditional coaching inn, half modern European restaurant, which sums up the food perfectly. Those who want to pop by for a light lunch can sate themselves with excellent chicken and avocado sandwiches, and a glass of the restaurant’s fine house wine – served by the magnum, and a note taken of how much is drunk in order to work out a charge. Whereas those who want a more comprehensive a la carte experience have a plethora of options, which all but the faint-hearted get stuck into.

We visit on a Friday, which brings about an inevitable discussion about whether to have fish or not, but in the end we decide against it as a main, although my chum can’t resist the scallops in an effort to be at least semi-pescetarian; I go in for the burrata with tomatoes and pesto, which is a textbook example of how to make a relatively simple dish very nice. (A clue: use really good burrata and tomatoes, in this case sourced from the Isle of Wight.) We start the meal with a couple of glasses of the Surrey Hills sparkling – which is excellent – and then we are recommended a bottle of the Bel and the Dragon white Burgundy. This can be a divisive wine, and my friend expressed regret that she wasn’t sipping on her favoured New Zealand Sauvignon Blanc, but I loved it; it had a deep, rich quality to it that perfectly complimented the starters. 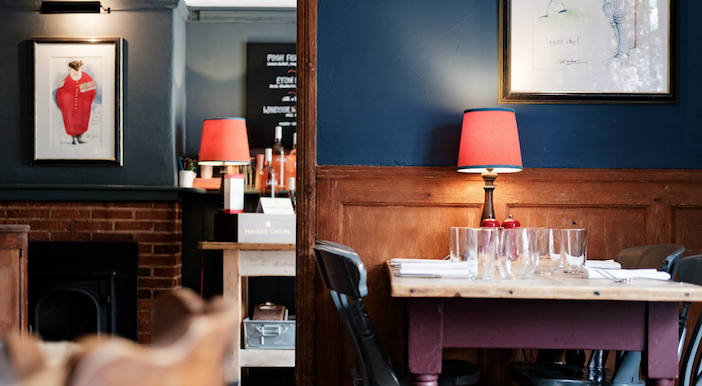 Then it’s time for steak – rib-eye for me, fillet for her – both of which are an exemplary case of what can be done with a Josper grill, good-quality meat and the liberal application of béarnaise sauce. Our waiter, who has decided early on in the meal that we are ‘a couple of characters’, with some justification, offers a choice between Malbec and Cabernet Sauvignon, and looks pleased when we go for the Argentine finest; frankly, it would have seemed rude not to. We talk nonsense some more, while commenting vociferously on the excellence of the food. Being of a sensible and non-greedy disposition, she no longer eats puddings, but I insist, for journalistic reasons, that we share a chocolate nemesis; the proximity to the famous boys’ school leads to various jokes about the ‘Eton Mess’ on the menu, none of which are worth repeating.

Then the meal ends in the usual fashion; a fine espresso martini apiece, and then we part. As we do, my friend looks pleased. ‘I’ve been there before, of course, but that’s the nicest meal I’ve had in ages.’ And I find it hard to disagree with her bang-on summation.

Bel & the Dragon, Thames Street, 1 Datchet Road, Windsor, Berks. SL4 1QB. For more information, including details of events and private dining opportunities, visit www.belandthedragon-windsor.co.uk. Bel & the Dragon has been nominated for the 2019 Muddy Stilettos Best Restaurant in Berkshire. You can vote for it by visiting the website.