Trending
You are at:Home»The Foodie»The Future is Served
By Sophie McLean on May 12, 2021 The Foodie

“And why on earth would I know where the kitchen is?” came the retort from a rather well to do owner of a rather well to do property, one day over lunch. The idea being that the host in question had far more important preoccupations when it came to giving a party than knowing where the food was prepared. “I have staff for that” certainly seemed to be the suggestion.

Imagine a world where you never had to do the cooking. Or rather, where you could delegate to another, simply and easily to take care of the assemblage of whatever dish it might be that you were hungry for tonight.

Last week I went to meet with the owner and inventor of Moley Robotics, to explore exactly that. Once the stuff of space-age movies, today, a top tech team is engineering a new piece of intelligence that means you might never need to cook again. Someone, or rather, something, takes care of that for you. In a new world that takes AI to the everyday extreme.

On arrival at the Aircraft Factory in Hammersmith, an apt title for a building that houses a number of tech starts ups, particularly this one that takes industrial design to the heart of what it does, I was greeted by a team of young designers, playing around with Moley, our friend, the robotic chef. 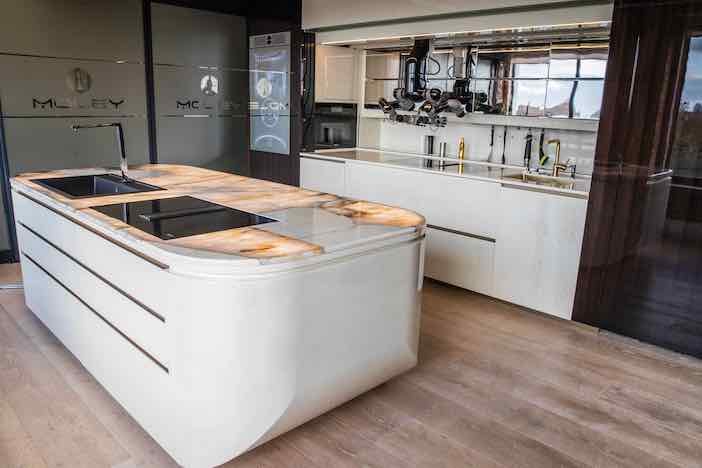 The set up looks just like any other kitchen counter set up – mirrored fridge cabinets that use IOT (the Internet Of Things) to house the fresh ingredients for a series of professionally designed recipes, that Moley has and will, increasingly learn how to cook. A stove top, an oven and a sink. To the left, a giant touch screen, otherwise known as the Guey (not unlike an enlarged version of those found in the centre dashboard of Elon Musk’s modern day Teslas) provides the intelligence centre for programming tonight’s, or in my case, this morning’s meal.

Suspended above the kitchen top, attached to a rail, then was our new friend Moley. His hands flexing as he glides across the counter, reaching out first to push the sink’s mixer tap nozzle out of the way, before picking up the correct pan needed for today’s menu. He struggles a little bit to pull the drawer towards him, so one of the young engineers helps correct his course, before deftly reaching down to switch the hob on, with an elongated, electronic finger. 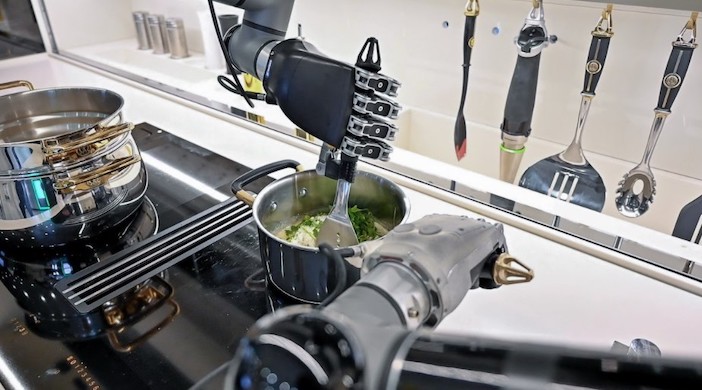 Moley is the brainchild of Mark Oleynik, a Russian entrepreneur who now calls London home, after having worked in Africa for a year, on a different kind of tech – this time, in medical trials. He tells me he has thought about inventing our robotic chef ever since he was about 14 years old ‘maybe before that’. And claims his reasons for doing so is down to it taking less time for this to be successfully developed than it would for him to learn to cook. “It’s for mid-week style meals,” he says, not intending to put any haut cuisine chefs out of business anytime soon, adding that the team has seen demand for it from businesses as well as private homes.

He describes the idea of being able to disrupt the status quo of late night chefs, doing room service or hotel night shifts, being useful in care homes, or in places where good food is required but can’t always be cooked by the person who needs it. It is perhaps a little far off becoming common place in everyone’s homes at a (current) cool quarter of a million pounds to install and set up, plus there’s the added task still of needing to chop the vegetables or individual items required for the recipe before placing them in their gold-topped fridge-able containers. But, in the same way that Tesla has become more democratised, Oleynik hopes that Moley can become more far-reaching too, in the not too distant future. 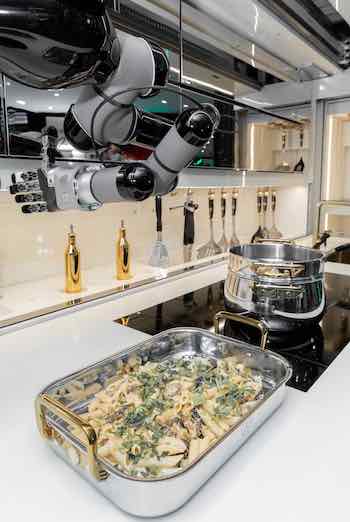 Moley’s cooking process is something quite mesmerising, watching the robot move from left to right, stir the pan of rice (we are making Paella – one of a growing number of up to 5,000 dishes that this artificial brain and body is now able to master), – always clockwise, and in this morning’s instance, not without a small amount of mess. The beauty is, I imagine, being able to programme the robot to start cooking before you get home, knowing you’ll arrive back to a healthy, made-from-scratch meal that you haven’t had to cook yourself. And while those who love to cook, or to go out to eat may not quite see the appeal here, Moley certainly provides a different kind of theatre.

The movements are nimble – something Oleynik cites as one of the biggest bottlenecks they’ve encountered in its ever-evolving design. “Hand dexterity was first unreliable and weak,” he says, mentioning also safety and energy (batteries or mains supply?) as further challenges to overcome. The level of dynamic stability that Moley has now reached has taken a total of six years to master. Morley moves by reading the environment, responding to timing and temperature, and then employing sequence of operation through the internal data supplied via hundreds of camera images captured as it is cooking. These are delivered in accordance with the precise cooking timings given by the creators of each chosen dish.

After almost two hours, the result is a very tasty, large bowl of steaming, saffron-drenched chorizo and chicken paella. This is no easy dish to cook, and one often hard to replicate away from its native motherland of Spain. We dive in eagerly.  It’s been a very interesting morning of disruptive movement. A welcome reminder that in amongst the stasis that most of us currently find ourselves stuck within, there are people still very much continuing to journey in a different direction. The taste of Paella lingers on my palate as I leave, alongside memories of eating it, in situ, under hot-to-touch parasols in Spain. I wonder, as I return home to my flat’s now-far-too familiar four walls, if in these sci-fi times of technological development, what else we might be able to genuinely experience next.

Please God, let it be teleportation.

For more information about Moley Robotics, including a demonstration of the Moley robot in action, please visit www.moley.com.