Trending
You are at:Home»The Lifestyle»Fashion»Dead Man’s Patterns
By Kate Lawson on February 6, 2012 Fashion

London and New York design agency Sheridan & Co. are to host a series of creative shows in their London space this year, the first of which showcases the work of Hormazd Narielwalla, and will take place during London Fashion Week this month. 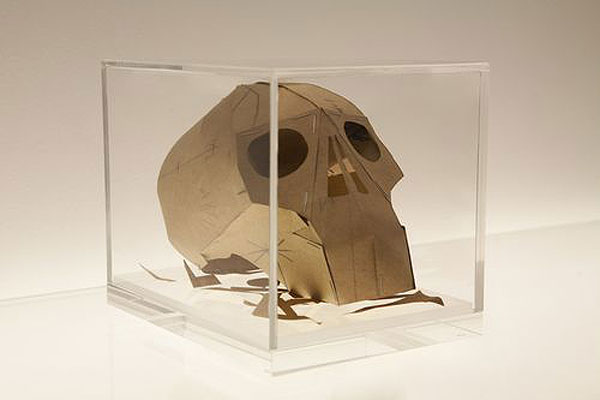 The exhibition, entitled Dead Man’s Patterns, Memento Mori, features seven three-dimensional skulls from a limited edition of 50, accompanied by seven two-dimensional artworks from an edition of 50, which all explore the remembrances of death. The exhibition will also include an analogue light projection by BAFTA award-winning artist Ed Burton.

Narielwalla, who also brought us ‘Fairy God, Fashion Mother’ is an artist who creates collages from discarded tailoring patterns of Savile Row customers, who have now passed on. The bespoke patterns are divorced from the tailoring context; however, they remain in the context of death – hence the title of this show. The exhibition is the artist’s first three-dimensional series of collages, which displays each dead man’s pattern cut, bent, stapled and stuck together, to create a precious human skull form, with the remains of his imprint. 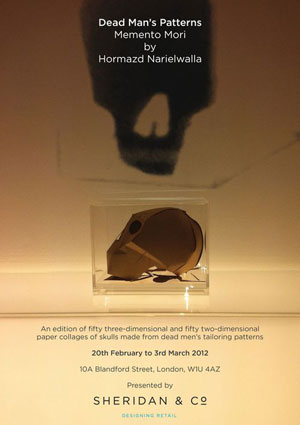 The skulls are presented in clear cases, akin to preserved relics, with the detritus from the making process of each skull littering the floor of its case. Each skull is accompanied by a series of two-dimensional collages using the remains, revealing a silhouette of the skull in negative space.

Narielwalla’s exploration of tailoring archives includes the book, The Savile Row Cutter, and limited-edition book Dead Man’s Patterns, which was acquired by several art collections including the Rare British Modern Collection at the British Library. The last five copies of the book will be available at the exhibition. Designer Paul Smith also showcased Narielwalla’s first solo exhibition ‘A Study On Anansi’ at his Mayfair gallery in 2009.

The exhibition will run from February 20th to March 3rd at Sheridan & Co’s Blandford Street Studio, at 10A Blandford Street, W1. For more info, head to www.narielwalla.com.