Well, 2022 has kicked off with some impressive sporting fixtures already, eh? If you’re gripped by the Australian Open (ahem, let’s not talk about the men’s Ashes series) and already getting that sinking feeling that it’s entering its closing stages (obviously doesn’t help that the British contingent are out – apologies, international readers), you may have already seen the first flourishes of TV promos for the Winter Olympics, let alone the World Cup later in the year – and we’re not even in February yet. Ah, it’s good to have it all back, isn’t it?

Of course, February also means the Six Nations; that annual gladiatorial contest of rivalries dating back to the Dark Ages between the British Isles and its continental counterparts, only these days we swap our bows and arrows for balls and send forth our brawniest champions into the arena.

And what better way to capture the action than with our colours on our back and a pint in our hand, eh? Never mind the hallowed stands at Twickenham, arguably it’s far better to gather with pals for a bit of back-slapping and roaring, and communal camaraderie with strangers, watching the action on giant screens in the confines of a favourite local watering hole.

And that’s where Young’s come in. Whether it’s the heat of the action in the bar, a garden hut or a private room, there are various options on offer, from unrestricted viewing areas to sports packages, complete with a range of sharing platters or scrum-ptious (sorry) specials at their Burger Shacks to go with that pint of two. 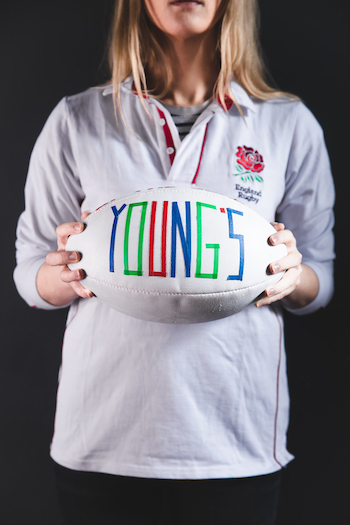 Kicking off from Saturday 5th February, Young’s have teamed up with Guinness to offer a selection of limited-edition dishes – tackle the likes of Sticky Guinness spatchcock chicken, sumac fries and pistachio crumb, or the Ribs Sharer of Guinness-glazed lamb ribs, curly fries, toasted pine nuts, red cabbage and apple slaw. And pre-booked packages come with a complimentary round of Guinness, to boot.

From Brixton’s Hope & Anchor, with its 24 – yes, 24 – screens, to the legendary The Ship in Wandsworth and North London’s biggest and best beer garden at Islington’s Canonbury Tavern, you’re never less than a stone’s throw from a Young’s pub in the capital to catch all the action.

What’s more, Young’s will be offering fans the chance to get their hands on a signed England Rugby shirt and ball, alongside two tickets for England vs Ireland with an overnight stay and dinner at one of Young’s boutique hotels*. Keep an eye on @youngspubs Instagram for details.

Grab the squad and scrum on down to your local Young’s pub this Six Nations!

For the full list of Young’s pubs, please visit www.youngs.co.uk. And don’t forget to pre-book one of the bespoke packages for a round of complimentary Guinness.

Prize includes two tickets to England vs Ireland on 12th March 2022, one night’s accommodation at a Young’s hotel and a two-course dinner for two. Prize must be redeemed on specified dates. Winner will be drawn at random on 05/03/2022 and notified by email. We may wish to publish your experience on social media channels and will be in touch to arrange this. Winner and guest must be over 18, not open to employees of Young’s. No cash alternative available. Prize not transferable. We reserve the right to withdraw the winner if we don’t receive acknowledgement of the prize win by 8/03/2022.